Give Me Five! Bright Colors Are So Passé: Here Are 5 (+1) Gray-Dialed Wristwatches For 2017 From Greubel Forsey, Hermès, Zenith, Carl F. Bucherer, Ressence And Sarpaneva

Each year has its own color trend, and while black and white are the “evergreen” classics, it is the myriad elegantly understated dark shades of gray that seem to be setting the tone this season.

Black exudes a timeless elegance that can be diversely combined with other tones. Well aware that “black is beautiful,” the great Coco Chanel mostly preferred to wear and to work with this hue, which, by definition, isn’t actually a color at all. Chanel made her “little black dress” fashionable back in 1926, and still today nearly every fashion designer includes this ultimate classic in his or her collection.

Henry Ford was likewise aware of the irresistible pull of the non-color. “Any customer can have a car painted any color that he wants so long as it is black,” the car maker said.

Aside from black and white, other special tones and shadings regularly dominate the dials, cases, and straps of modern watches since colors introduce a fresh breeze and act as a showcase for new designs. Countless watch models with blue dials have appeared during the past several years, so one can actually no longer really talk of it as a trend considering the meaning of the term as a transient phenomenon.

Gray seems to be the new color of choice for many watchmakers in 2017. This appealing nuance is darker than white and paler than black, but generates no chromatic valence. According to the theory of colors, nine graduated shades exist between black and white, all named gray. With their subtle character expressing understatement, grays discretely shun the limelight and perfectly complement every outfit.

Here we present you five (okay, six) timepieces with gray dials that have caught our attention so far this year.

Fans of independent watchmaking need no further explanation when we rave about Greubel Forsey since the brand founded by Robert Greubel and Stephen Forsey enjoys the highest reputation among collectors. The duo’s virtuoso “whirlwind” creations such as the Quadruple Tourbillon, the Double Tourbillon 30°, and the Tourbillon 24 Secondes are unique statements of sophisticated horology and expert craftsmanship in the form of delicately crafted models that truly raise the bar of this sought-after genre.

Surprisingly, the Greubel Forsey Balancier, which made its debut in 2017, does not feature a tourbillon, but rather puts the balance in the spotlight in the lower left part of the dial. The large diameter 12.6 mm balance wheel fitted with six regulating screws is supported under an elegantly sculptured balance cock.

Thanks to the asymmetrical case construction’s transparent bulge at 8 o’clock, the balance is illuminated by light coming in from the side window. The small seconds are arranged on the opposite side of the dial as a visual counterbalance. 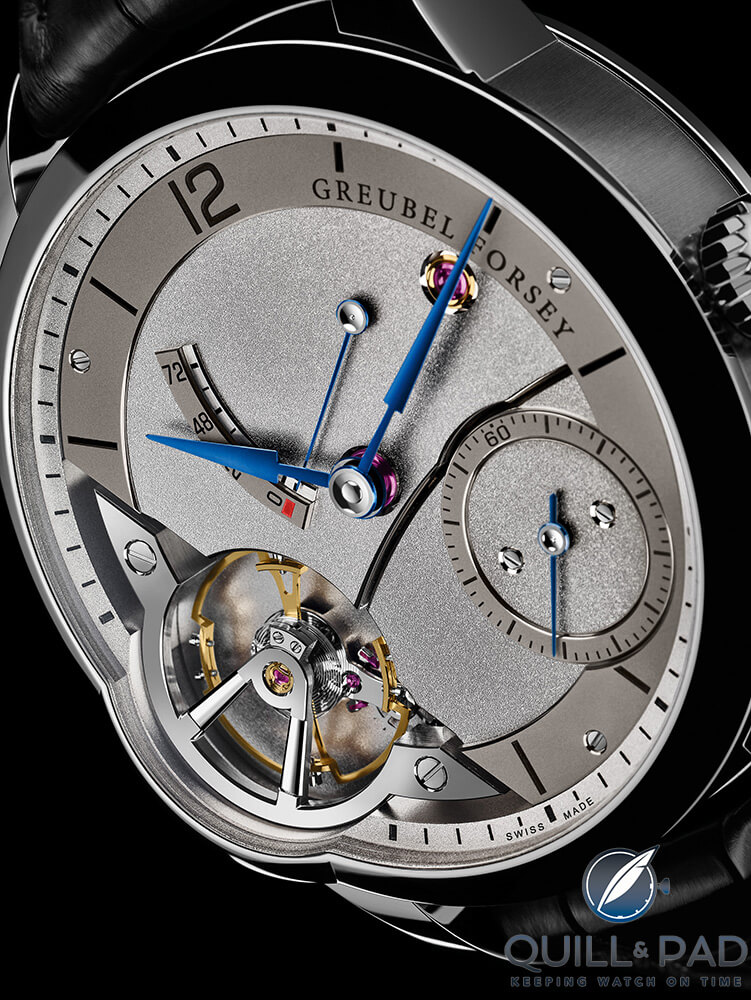 But this is not all that the Balancier has to offer: there is also a beautifully executed power reserve indicator in the upper part of the dial. This harmonious composition of indications is staged on a meticulously frost-finished dial with a silver-grayish tone. The hand-wound movement ticking beneath this masterpiece of design understatement and all its components, including the arrow-shaped and blued hour and minute hands, are naturally hand-finished to perfection.

Much more on this timepiece in Ian Skellern’s photo-heavy post Nowhere To Hide: Presenting The Greubel Forsey Balancier (With Lots Of Live Photos).

Originally introduced in 1991 as the first non-round timepiece of the Swiss arm of the French maison, the Hermès Cape Cod delights with its playful rectangular case and square encircling the Hermès logo. The initials “TGM” stand for “Très Grande Modèle,” while “Manufacture” on the dial denotes that the “very big model” is powered by a genuine manufacture movement, automatic Caliber H1912, which offers a power reserve of 50 hours. This movement ticks underneath the deep anthracite-colored dial displaying the characteristic tapisserie-like textured pattern surrounded by the bold Hermès numerals in the line’s timeless typeface.

For much more on the history of the Cape Cod celebrating its twenty-fifth anniversary in 2017, see 25 Years Of The Hermès Cape Cod.

When it debuted as the world’s first automatic chronograph movement in 1969, Zenith’s El Primero opened a new chapter in watch history.

With the chronograph mechanism integrated into the caliber rather than added to it as a separate module, the high 5 Hz frequency of this movement enables it to measures intervals to the nearest one-tenth of a second. It goes without saying that a host of variations have been launched over the past decades since this movement’s introduction.

In one of the latest, the El Primero takes on a deeply nautical aura. Designed for the British challenger of the 35th America’s Cup in Bermuda, the Land Rover BAR team led by four-time Olympic gold medalist Sir Ben Ainslie (hence the initials “BAR” in the team name), this limited edition is water-resistant to 200 meters and equipped with a new dark-colored rubber strap coated with carbon fiber, the same material used for parts of Ainslie’s boat. This strap stylishly matches the slate-gray dial with a smooth velvet-texture finish that displays the legendary watch’s familiar tricompax layout surrounded by the tachymeter scale on the flange.

For more on Zenith’s America’s Cup participation, see America’s Cup 2017: The Final Round Gets Underway . . . And There’s A Watch Brand For Each Team In This Epochal 166-Year-Old Regatta. Among the three new variants of this flyback chronograph powered by a manufacture movement with column-wheel control of the chronograph is an attractively priced steel version with a bluish-gray dial distinguished by a really well-done retro design. The vibrantly dark hue provides a perfect background for the two chronograph counters, the tachymeter scale on the flange, and the date window at 6 o’clock. A chronograph par excellence!

Finnish watchmaker, goldsmith, and designer Stepan Sarpaneva presented his first diver’s watch this year: the Vetehinen. Named for a famous seagoing vessel from World War II, I the Vetehinen packs a lot of local sisu on the wrist. Sisu is a unique Finnish word that cannot be precisely translated but roughly means the character trait of having “guts” or “never quitting.”

The Vetehinen timepiece in Sarpaneva’s sub-brand S.U.F Helsinki was created in this spirit. Water resistant to 300 meters, its case is crafted using 316L/4435 stainless steel from Finland’s steel giant Outokumpu and forged in Helsinki. In order to improve the sturdiness, the Vetehinen case is additionally impregnated with anti-corrosive nickel, also mined from Finnish grounds. The dial, available in a deep gray tone similar to the color of the Baltic Sea’s waves, features new harpoon-shaped or “devil-tail” hands and is surrounded by the bold crenellated bezel reminiscent of Sarpaneva’s Korona line.

Okay, we cheated: here is a bonus watch for your viewing pleasure: the Type 5 in gray by Ressence, the “no-hands” diver’s watch.

It of course contains unique technology: immersing the ROCS (Ressence Orbital Convex System) time-display module in oil allows it to be viewed under water from any angle; it also has the advantage of being incompressible, making the watch more robust at depth. The 10 ATM water resistance rating and the appealing aesthetics of this watch make it a real winner in any color.