Watchmaking and exploration have a rich history.

Whether land, sky, or sea, a wristwatch of exceptional caliber has always been chosen to accompany humankind on such journeys.

In this series I will examine watch movements that have been employed over the years for their exceptional characters, becoming well-loved for their quality, robustness, and collectible status.

While all the movements I examine here have been used in a variety of models, I have chosen them specifically for their relationship with tool watches of decades past, when timepieces were designed with a specific purpose in mind and then used in that manner.

When it comes to selecting a watch for the purposes of getting the job done, there are three qualities that must be looked for: simple, robust, and reliable. And no movement can be more greatly heralded on all three qualities than IWC’s Caliber 89, which was in production from 1946 to 1979. I have had the privilege of restoring a few Caliber 89s over the years, and this movement is by far my favorite manual-wind watch to date.

In 1944 IWC launched its first W.W.W watch for use by the British military. “Watch, Wrist, Waterproof” was the military designation given these watches, and that was what the acronym stood for.

Over time, these watches came to be known by collectors as the Mark X. They are characterized by their central hour and minute hands, subsidiary seconds at 6 o’clock, and broad arrow insignia just under the 12 o’clock marker on the dial, indicating property of the British government.

The year 1944 also happened to be the year in which Albert Pellaton took up his post as technical director of IWC. That name may sound familiar to you as he was the inventor of IWC’s Pellaton winding system, which remains in use to this day.

It was in 1946 that Pellaton’s first movement came to life: Caliber 89.

Caliber 89 was launched into production in 1948 in the IWC Mark XI, a legendary pilot’s watch ordered by the British Ministry of Defense. The movement specifics of IWC Caliber 89

The movement measured 27.1 mm and featured a center-seconds hand, 17 jewels, overcoil balance spring, and the option of hacking seconds. It beat at a frequency of 2.5 Hz /18,000 vph.

The movement itself is fairly plain, but it is unquestionably beautiful in its simplicity. The barrel is housed under a fairly standard barrel bridge, with the center and third wheels under their own bridge spanning the diameter of the main plate. The fourth and escape wheels, however, are tucked underneath separate cocks.

The bridges and cocks utilized on Caliber 89 are of a high quality, finished with a fairly wide Geneva stripe, and incorporating a substantially beveled edge. However, it is not the finishing that sets this caliber above the rest, but the construction. The bridges and cocks have been built with rigidity and strength in mind, showcasing function and form. They feature hefty steady pins to secure the bridges into the plate. The bridges themselves are thick, thus increasing robustness.

Caliber 89 also featured Incabloc shock protection for the balance in all but the earliest models, ensuring that the ever-precious balance pivots remain intact. The click spring is another area illustrating the beauty of this movement’s simplicity. A straight steel spring bar interacting with the ratchet wheel ensures the job gets done.

The screws of Caliber 89 are heavy and no nonsense. The heads are solid, and the oversized length of the threads ensures maximum reliability.

The central second hand again points toward the quality construction of Caliber 89. Many movements of the day, and even on into the 1970s, used a pinion with an extended pivot for the center seconds feature. A flat spring featuring a flat polished tip holds the pinion in place.

The purpose of the spring is twofold: to hold the pinion in place and to ensure the hand would be under enough tension to not “flutter” its way around the dial. 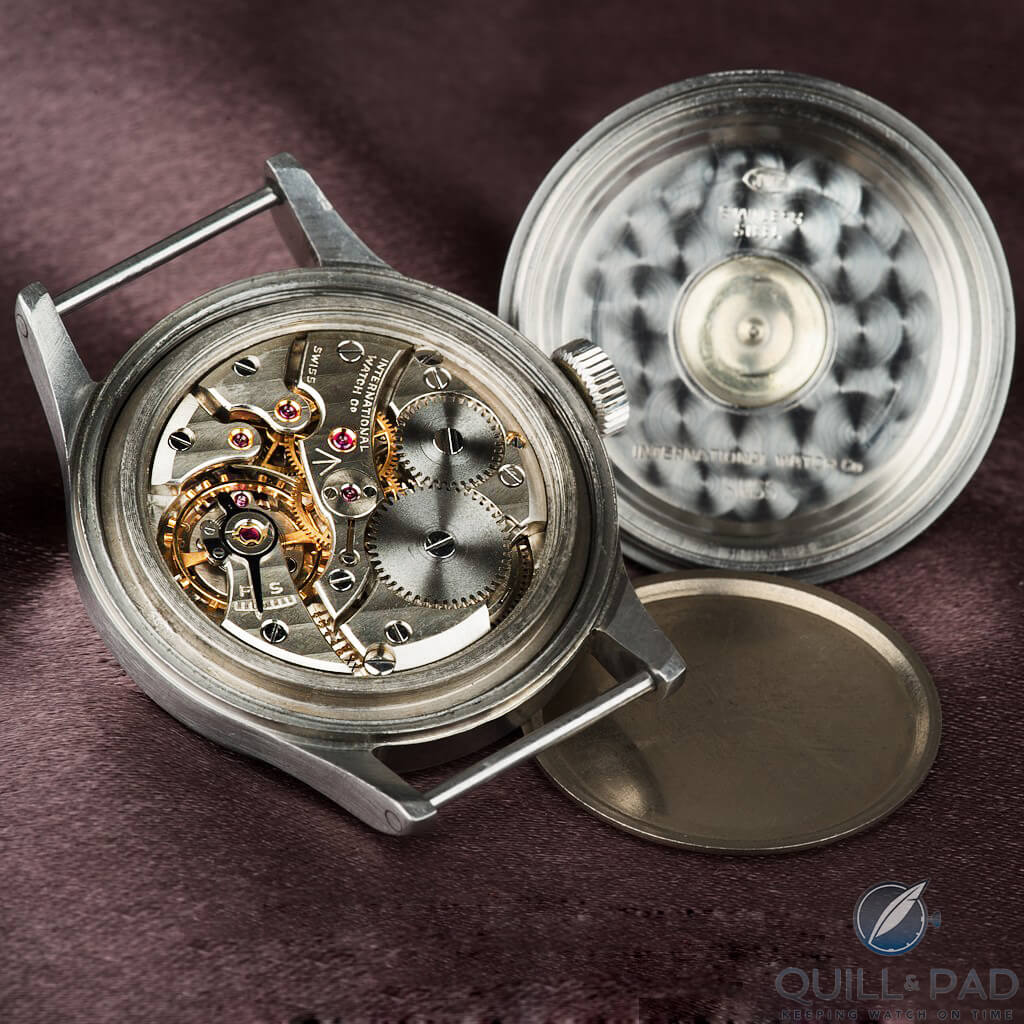 Caliber 89, however, took things a step further. IWC changed the design of the spring to act against the side of the pinion as opposed to the top. It still utilized the spring to ensure the hand moved correctly, but it also had the seconds pinion held in place via a small bridge over the top, providing the watch with an added level of safety in case of accidental damage.

This feature also helps with long-term maintenance as these springs tend to get damaged easily when they are used as the only means of securing the pinion in place. Damage is generally caused when the hands are fitted to the watch. With this added feature, Caliber 89 ensures that doesn’t happen.

Over the years, IWC’s Caliber 89 has made its way into a variety of different models in addition to the legendary pilot’s watch, including the original Yacht Club and various dress watches.

Caliber 89 will always, at its core, be a movement developed with exploration and adventure in mind. It adorned the wrist of those whose lives depended on it, and they knew they could.