With its idiosyncratic rounded octagonal bezel and bold horizontal stripes accentuating its dial, Patek Philippe’s Nautilus has represented the epitome of sporty casual in horological design for 42 years.

Since its introduction in 1976, the Nautilus collection has offered a wide selection of timepieces in stainless steel, white and pink gold, and two-tone including useful complications such as chronographs – with and without GMT indication – power reserve indicators, moon phases, and an annual calendar. Superb high-jewelry executions have also been introduced over the years.

However, it was only at Baselworld 2018 that the popular Nautilus was introduced with a really serious complication: a perpetual calendar. And as to be expected from Patek Philippe, Reference 5740/1G-001 is extremely thin with a case height coming in at just 8.42 millimeters. Un enfant terrible with a mind of its own

As watch enthusiasts familiar with the history of this independently owned Swiss manufactory founded in 1839 are well aware of, every Patek Philippe has a story to tell. Including the Nautilus.

When first introduced in 1976, the watch made a surprising statement because it challenged the traditions and the codes setting the tone for luxury timepieces during that period: for one, it was made of everyday stainless steel instead of precious gold. Secondly, the design was unconventional – if not shocking. Designed like a porthole, the two-piece case with lateral case extension ridges at 9 and 3 o’clock – malicious gossip had them looking like (Mickey Mouse) ears – measured a full 40 mm in diameter: far too large for a luxury timekeeper critics remarked. As a side note, today collectors affectionately call the original Nautilus of 1976 the “Jumbo.”

And, on top of that the crystal was framed by a somewhat awkwardly shaped bezel. Neither round nor square, it was described as an octagon with rounded corners, satin-finished on the upper plane and mirror-polished on the beveled flanks.

The expensive wristwatch was outfitted with a solid stainless steel bracelet finished with the same matte-and-gloss polish, considered by critics inappropriate for the luxury segment.

Additionally, the bezel framed a blue-tinged charcoal dial decorated with bold horizontal stripes instead of the then-usual fine filigree guilloche pattern. People either loved it or hated it.

Daring to be different

These supposed faux pas were the brainchild of no one other than Gérald Genta (1931-2011), the visionary and probably most influential watch designer of that era. When he created the Nautilus on the request of then-company president Philippe Stern, a passionate sailor, he had a new market segment of watch lovers in mind: young, rich businessmen with an active lifestyle, yet rooted in classical values and appreciative of the noble ancestry of the mechanical timepiece.

And the Nautilus, sturdy and water resistant to 120 meters thanks to its case construction and elaborate seals and gaskets, proved itself able to handle the demanding requirements of a modern watch in the 1970s. These included being a companion to all kinds of sporting endeavors, yet able to master business settings – thanks in part to the brand name on the dial, testifying that the wearer of this timepiece was a real connoisseur. This all went along with the advertising campaign marketing the maritime-inspired timepiece: “It goes with a wetsuit as well as with a tuxedo.”

In terms of mechanics, Patek Philippe decided to use a movement based on Jaeger-LeCoultre’s automatic Caliber 920, which became the Patek Philippe Caliber 28-255 C, one of the slimmest automatic movements of its time. Although equipped with a full-size central rotor, it measured just 3.15 millimeters in height.

The initially criticized large size of the watch ultimately became a selling point. In fact, in 1998 Patek Philippe once again launched a Nautilus in the original case size to meet collectors’ increasing demands.

But the company didn’t just re-release the original version at that moment – far from it: the new version featured an innovative power reserve indicator with a small hand and unique display earning it the nickname “Comet.” One year later, in 1999, the Nautilus line welcomed Reference 3712/1A, the first Nautilus to include three complications: a power reserve indication, a moon phase display, and a date hand. Launched in stainless steel, it was driven by the extra-flat Caliber 240 PS IRM C LU equipped with a micro rotor.

This watch, one of the few stainless-steel complications of this house, quickly became sought after among collectors.

Staying the course for 40 years

In 2006, on the occasion of the thirtieth anniversary of the Nautilus, Patek Philippe introduced a new generation with a subtle design and technical update. The sides, slightly arched, lent the bold watch a kind of softer look. The two-part case was superseded by a three-part construction.

With a diameter of 43 millimeters, the three-handed Reference 5711/1A was one millimeter larger than its predecessor, since at that time big sizes were the prevailing trend. The technical flagship was Reference 5980, a flyback chronograph with a sophisticated column wheel.

“Sophisticated” was also the leitmotif of Reference 5726A, an annual calendar Nautilus from 2010 that was surprisingly secured to the wrist with a leather strap instead of a metal bracelet. With the Nautilus Travel Time Reference 5990, Patek Philippe wrote another chapter in the history of the legendary timepiece. Introduced in 2014, the state-of-the-art chronograph indicates the time in two different time zones at a single glance. 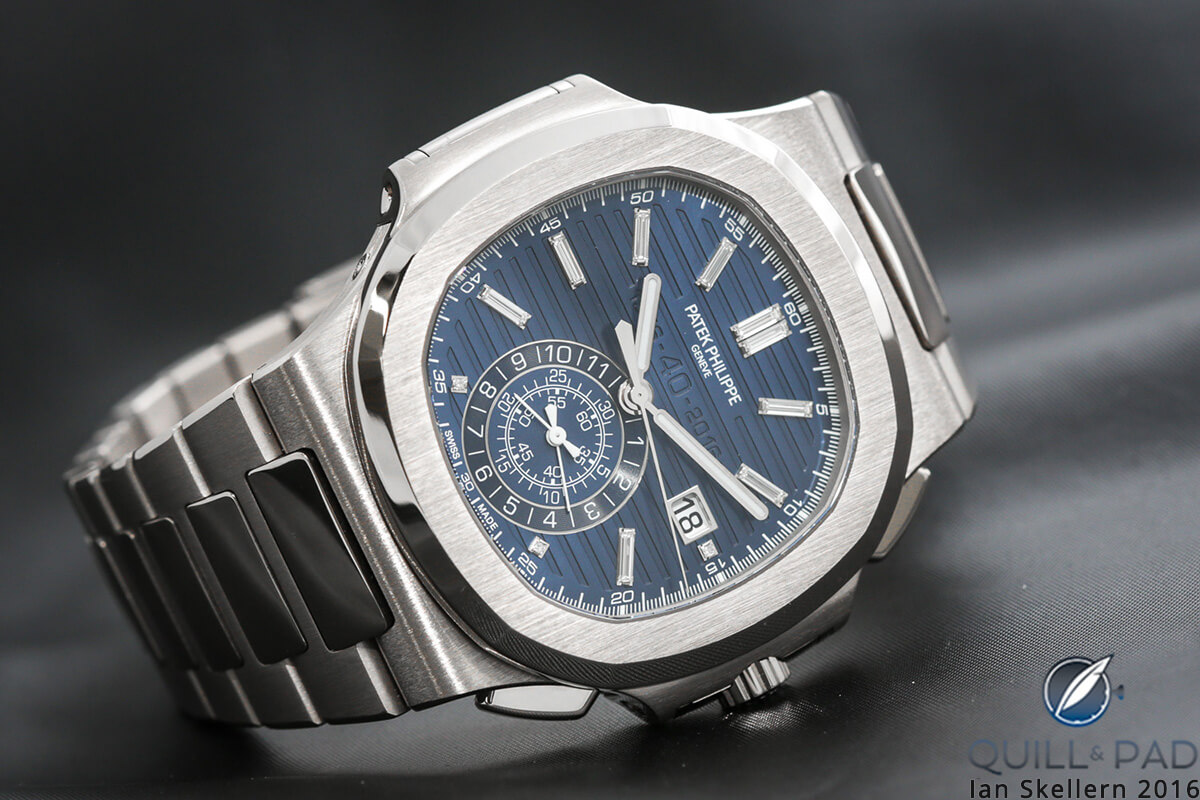 In 2016 Patek Philippe launched two limited edition Nautilus models on the occasion of its fortieth anniversary: Reference 5711/1P in a 40 mm platinum case paid tribute to the original Reference 3700/1A “Jumbo” dating back to 1976, while the 44 mm Nautilus flyback chronograph Reference 5976/1G in white gold was an homage to the model launched ten years previous in 2006. Both models featured a blue dial with a recessed anniversary logo and – at first widely criticized before fans got used to them – baguette-cut diamonds as hour markers.

At Baselworld 2018, Patek Philippe had another surprise up its sleeve: for the first time, the legendary Nautilus was endowed with a “really” complicated movement – as per the brand’s own definition of complicated – a perpetual calendar, which in fact is the signature complication of the house. Reference 57401G, probably one of the most talked-about watches at Baselworld 2018, features all the hallmark elements of a true Nautilus such as the case shape and thin profile (8.42 mm), a blue dial (though in a lighter shade to match the white gold case), the signature horizontal stripes on the dial, and the smoothly integrated bracelet. Thanks to Caliber 240 Q, Patek Philippe’s ultra-thin automatic perpetual calendar movement, the wonderfully balanced dial displays a classic tricompax subdial structure with the month and leap year at 3 o’clock, the moon phase – beautifully finished with silver stars and a silver moon against a dark night sky – and date at 6 o’clock, and the weekday as well as the 24-hour indication at 9 o’clock.

When we flip the case over, we discover true horological artistry, too. Comprising 275 parts, Caliber 240 Q, a staple in the field of mechanical memory since 1977, is only 3.88 mm high. Hammering the point home: this is the height of a match head!

Despite its modest proportions, the 240 Q integrates an off-center micro rotor crafted in 22-karat gold to achieve the required energy to run this elegant workhorse movement, which is programmed to display the correct date until the year 2100. Caliber 240 Q is decorated with the Calatrava cross, which the Geneva manufactory officially registered as its legally protected trademark in 1887. It goes without saying that Caliber 240 Q has also earned the Patek Philippe Seal introduced in 2013, which imposes strict requirements on the manual finishing of movement parts in keeping with grand Genevan traditions and extreme accuracy with a tolerance of no more than -3/+2 seconds per day.