When Robin Williams passed away in 2014, it felt like the entire world was mourning him. One of this generation’s most beloved actors and comedians, the 63-year-old’s suicide was as swift as it was unexpected.

After starting out in stand-up comedy, Williams came to prominence playing the title character Mork in the screwball television series Mork and Mindy. His very first film was 1980’s Popeye, after which he went on to star in a cornucopia of films in both comedy and drama genres in addition to continuing to perform his beloved stand-up.

Williams’ best-known films include Good Morning Vietnam, Dead Poets Society, Good Will Hunting, Jumanji, Mrs. Doubtfire, and Night at the Museum – though he starred in many, many more.

Worldwide, his movies raked in a total of $5.2 billion over the course of his lifetime.

On October 4, 2018 in New York, Sotheby’s will auction a vast collection of items from Robin and his second wife Marsha Williams, including artworks and film memorabilia – and 44 wristwatches belonging to Williams.

Williams was known to wear a variety of timepieces and on occasion was spotted wearing a very visible Panerai Luminor Chronograph and an IWC Ceramic Doppelchrono, both of which are not included in this auction.

Viewing the lots, it becomes obvious though that Williams had quite a diverse collection. The watches span the gamut from complications and independents to sports and casual.

Here is a sampling of the watches in the auction.

A black PVD-coated stainless steel diver’s watch, the Doxa Sharkhunter is water resistant to a depth of 5,000 feet (1,500 meters) and thus includes a helium escape valve. 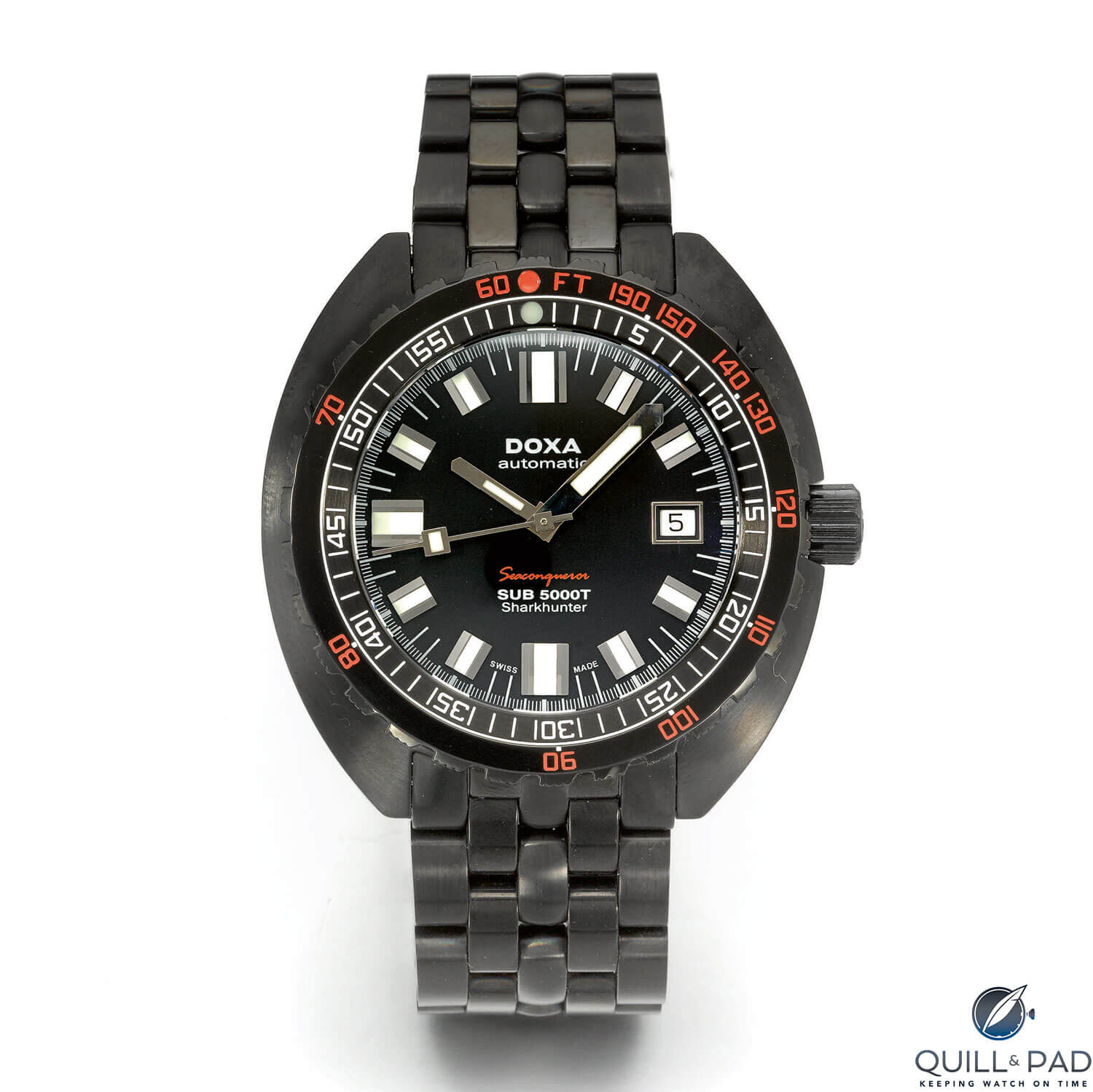 This is a serious diver’s watch, and Doxa, though a brand with quite a rich history in dive watches, is really only known to those with some watch knowledge these days. The auction estimate of $150-$300 is very humane.

The original series of Ikepod watches was designed by world-renowned Australian designer Marc Newson. This Hemipode Chronograph is one of those original watches, and I think Williams may have been drawn to the watch because of its interesting case shape and dial color. Martin Green explains what he finds so attractive about the original Megapode in Ikepod Megapode: Marc Newson’s Smartest Watch (And Perhaps My Smartest Rolex Trade).

The Franck Muller Imperial Tourbillon Minute Repeater is one of the most complicated watches in the collection of Robin Williams, featuring a tourbillon and a minute repeater housed in an 18-karat white gold tonneau-shaped case. This is a watch for a connoisseur, particularly as it does not feature any additional embellishments such as diamonds.

This Panerai Luminor Marina from 1998 is one of the first batch of watches made after the company was taken over by the Vendôme Group (now Richemont). 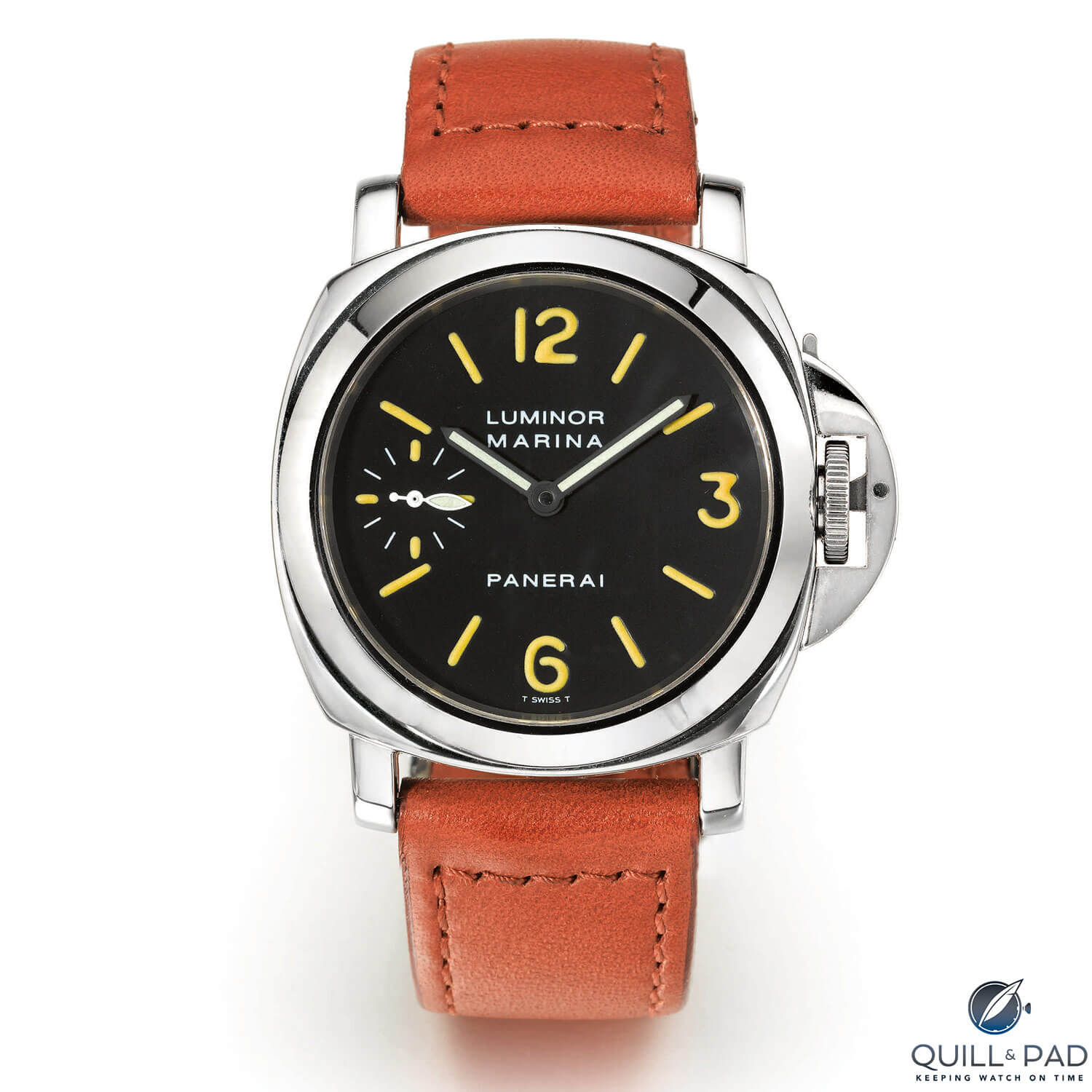 It features a painted dial in the minimalist style that Panerai is known for in addition to the iconic crown guard, making it instantly recognizable.

I have seen photos of Williams wearing a Luminor Chronograph, which shows he did like his Panerais – and in particular the Luminor series. There are also a Panerai Luminor Artkos GMT and a Panerai titanium diver’s compass in the same sale (lots 126 and 127).

This Daniel Roth Perpetual Calendar was developed by master watchmaker Daniel Roth, an independent watchmaker held in very high regard for his level of skill and his unusual creations. Williams obviously had an eye for collecting more complicated timepieces as this particular perpetual calendar illustrates: not only was it from an independent watchmaker, it was bought only ten years after Williams made his first film, Popeye . . . perhaps in the wake of Good Morning Vietnam’s success in 1987? In addition to including a perpetual calendar, this watch features Roth’s signature Double Ellipse case.

This Urban Jürgensen perpetual calendar with moon phase indication once again proved Williams’ great taste – as well as perhaps a thing for perpetual calendars – as the micro boutique, ultra-luxury brand Urban Jürgensen goes even further into the realm of true haute horlogerie than even Daniel Roth and is still only known to those who have an almost insider knowledge of watches. The stepped bezel and teardrop lugs of the platinum case alongside the guilloche dial make for the most classic elements of the Urban Jürgensen brand.

This Hamilton wristwatch may be quartz powered and encased in gold plate, but it made history in that it appeared on Williams’ wrist in one of his most notable roles: as John Keating in the 1988 film, Dead Poets Society.