* BREAKING NEWS: At the upcoming SIHH, which opens on January 20, Jaeger-LeCoultre will introduce an ultra-thin, highly complicated masterpiece: the Master Ultra-Thin Minute Repeater Flying Tourbillon, the eleventh specialty in the Hybris Mechanica line. Its Caliber 362 capitalizes on eight separate patents, six of which are entirely new. It is equipped with an original regulating system comprising a flying tourbillon with a flying balance wheel born of the demands of modern ultra-thin horology, a new high-performance balance spring, peripheral automatic winding, and a new minute repeater with a silent time lapse reduction system activated by a single retractable button and including a locking system. Automatic Caliber 362 with 45 hours of power reserve and 471 components measures a svelte 33.3 x 4.8 mm. Offered in a 75-piece limited edition, it is housed in a fully wearable 41 mm 18-karat extra-white gold case. Naturally, we will bring you the full story including original photography after the SIHH!

* On Sunday, December 29, a fire broke out in the galvanic department of the main building of ETA Manufacture Horlogère in Grenchen, Switzerland. The workshop was entirely destroyed, but no one was harmed and the fire did not expand to neighboring workshops. The cause is not known; damages caused by the fire are considerable.

* Breguet’s CEO Mark Hayek will be launching a new exhibition on innovations at Geneva’s Cité du Temps on January 22 that provides a firsthand look at some of the newest historic, rare pocket watch acquisitions from recent Christie’s and Sotheby’s auctions. The exhibition will run for about a week. * Omega announced new technology to debut during the Sochi 2014 Olympic Games bobsleigh races that makes important run-in data available instantly to competitors, teams and television viewers worldwide. This new device, which is mounted on each bobsleigh, consists of a speed sensor, a three-dimensional acceleration sensor, and a three-dimensional gyro-sensor, all of which acquire data in real time. * In anticipation of Baselworld 2014, Chopard announced the L.U.C. 1963, a purist chronometer stamped with the Seal of Geneva and certified by the C.O.S.C. to mark 50 years of the Scheufele family as owners of the Swiss brand. Its manually wound Caliber L.U.C. 63.01-L with 60 hours of power reserve was developed in partnership with the Geneva Watchmaking School; it was originally presented in 2010 to mark Chopard’s 150th anniversary. The L.U.C. 1963 is limited to 50 pieces each in a 44 mm 18-karat gold or platinum case.

* A new Arabic version of the www.patek.com official website is now available. Though Patek Philippe has had a web presence since 1997, this is the first time a definitive step forward toward improving communication with the entire Arab-speaking world has been attempted.

This closely follows the very successful Watch Art Grand Exhibition world tour series kicked off in Dubai in January 2012 and culminating in Munich in October 2013. Included in the site’s rich content, which includes an overview of the complete collection, maintenance advice and information on the Patek Philippe Museum, all instruction manuals are now also available in Arabic, which is essential information for watch owners.

* “Majestic Time,” an exhibition featuring a rare collection of pieces by English clockmaker Thomas Tompion, continues to run until January 19 at the National Watch and Clock Museum in Columbia, Pennsylvania. * Corum has opened a new boutique in a historic building in Paris’ 8th arrondissement on the right bank in collaboration with Kronometry 1999. * Zenith introduces the Pilot Montre d’Aéronef Type 20 GMT 1903, a tribute to Wilbur and Orville Wright, whose twin-propeller aircraft Flyer flew 40 meters at a height of 60 centimeters off the ground on December 17, 1903 at Kitty Hawk, North Carolina. Powered by the automatic Elite Calibre 693 and housed in a 48 mm titanium case with DLC coating, this watch limited to 1,903 pieces displays the time and a second time zone. * Roger Dubuis is currently running a humorous video clip at the exact same time each day, whose goal is to instill a sense of anticipation and ensure “a regular rendezvous” culminating in the “revelation” of the brand’s SIHH booth on Monday morning, January 20 at 9:00 am, which is sure to be spectacular. (Yes, we remember Camelot from last year!) All the videos, evoking a wider symbolism, will share the theme spelled out at www.goodbyecuckoo.com. 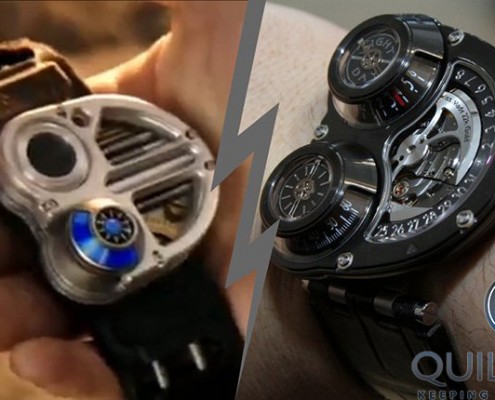 * An interesting story by aBlogtoWatch.com describes what looks very much like an MB&F HM3 on the “Marvel Agents of S.H.I.E.L.D.” television show.

* On Worldtempus, Kristian Haagen presents the new IWC Aquatimer, which will officially launch at SIHH 2014, in an interview with creative director Christian Knoop.