If you are an astute follower of all things horology, you may have already heard of our standing contributor and resident “nerdwriter,” Joshua Munchow: he won third prize in a design contest run by Eberhard & Co. last year, which saw him attend Baselworld 2013. As a result of that trip, he began seriously writing articles for Watchuseek. These articles were so informative and filled with intelligent commentary that they attracted our attention too.

So we made a point of getting to know Joshua a little and discovering what makes him tick. As Joshua has told me, his love for complicated mechanics began when he was a little kid with Legos, Lincoln Logs, Erector sets, and K’NEX Ferris wheels. “I enjoyed taking large amounts of time to concentrate on making something with my own two hands, and I received great satisfaction once I completed it,” he says today. “The only problem was that satisfaction didn’t last long, so I was always on the lookout for more things to build. This eventually resulted in my fascination with taking things apart.”

Stories of precocious kids taking valuable things apart abound, but Joshua assures me he never dismantled anything his family needed. “But I did take apart anything that was bound for the trash or was broken,” he explains. “I learned a lot about how things worked and how things were made that way. I even watched ‘Mr. Rogers’ Neighborhood’ well into my teens simply because every episode would show a tour of a factory where trombones or bicycles were made, and later in life I loved the series ‘How It’s Made.’ To my young mind, this was absolutely fascinating.”

Obviously something of a whiz, Joshua rebuilt his first motorcycle when he was 16 and did all of his own car repairs. “As my knowledge and tool box allowed,” the good-natured technician jokes.

College saw him heading toward a business administration degree when, after one semester, he realized he wanted to “make things.” While studying graphic design, he learned of a program called Modelmaking and Model Design at Bemidji State University and filed for a transfer the very next morning.

As he studied model design, he enthusiastically plunged headlong into every class, learning as much as he could. “I took extra engineering courses to increase my knowledge and even was the lead fabricator on a racing hovercraft for the university,” he says. “While learning to make things, I discovered my two true ‘making’ passions: film props and watches (and anything with complicated mechanisms inside).” At university, he became known as “the watch guy” as he wanted to make every project about watches. In his third year, he designed and built a desktop model of a tri-axial tourbillon. “Because I wanted one,” he explains. His studies included a semester at the University of Hertfordshire in the U.K., where he made film props and even spent a week as an intern in the prop department of Harry Potter and the Deathly Hallows. Upon finishing his degree in 2010, Joshua looked for jobs in movie model-making, assuming − incorrectly, as it turned out − that would be his future. Having landed an “amazing” position working for a design firm as head of the prototype shop in a major American city, Joshua is now part of a team that designs and engineers solutions for everything from fishing reels to aerospace interiors. “Every day I get to make new ideas into reality,” he says.

But what about watches and his love of mechanisms?

“After I settled into my position, I began to re-explore my hobby and desire to become a watchmaker. I started reading everything I could, every blog and every magazine; I started to draw designs for watches and mechanisms, and I tried to learn about how they all worked.” 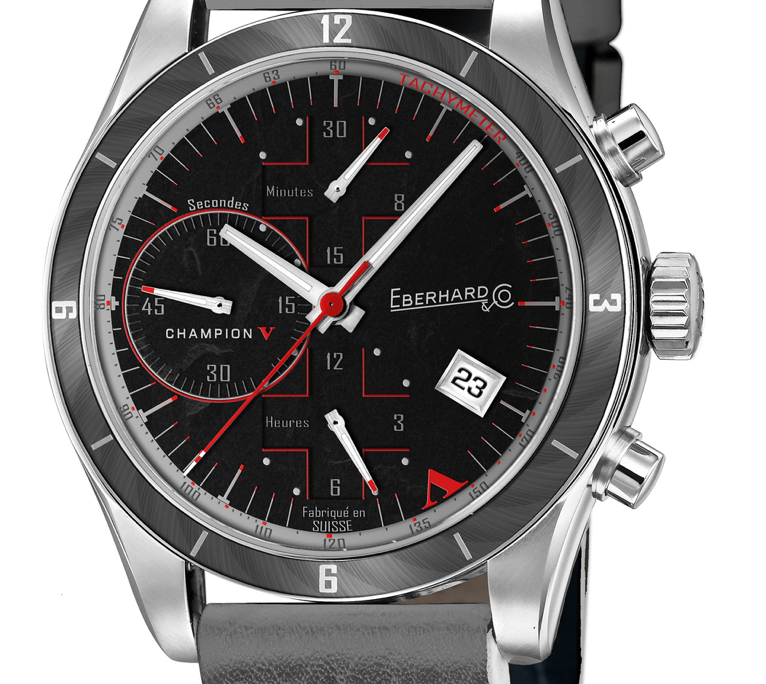 Joshua Munchow’s design for the Eberhard Champion V, which won him 3rd place and a trip to Baselworld

Culminating in Eberhard & Co.’s aforementioned design contest, which Joshua entered through Watchuseek, and his prize-funded visit to Baselworld in April 2013. “There I met a lot of great people, including ‘names’ that most everyone in the watch world is familiar with such as Elizabeth and Ian, becoming friends with many of them. I got the chance to sit down with some great watches and speak with many amazing watchmakers including Peter Speake-Marin, the Grönefeld brothers, Stepan Sarpaneva, and Kees Engelbarts, who all allowed me to pick their brains!” This is also where Joshua met Watchuseek founder Ernie Romers as his site had been a host for the Eberhard & Co. contest. Shortly thereafter, Joshua began posting regular stories on Watchuseek beginning with the contest and the Eberhard watch he won as a prize. “That article was the catalyst, and I began detailing my nerdy appreciation for high-end complicated timepieces with articles running the whole gamut of what makes me love mechanical things. Now at the turn of 2014, I have joined the great duo of Elizabeth Doerr and Ian Skellern on Quill & Pad, hoping to share my nerd-filled passion for all things awesome.”

Ian and I would like to thank Ernie Romers, Watchuseek, and, of course, Joshua for supporting our new venture Quill & Pad so wholeheartedly. For all of us, this online magazine represents a new frontier. What better way to share it than with friends, old and new, passionate about the same subject. Please join us in welcoming Joshua and watch out for his always-interesting “wordinations” (word explosions) every Monday on Quill & Pad.

In the video above you can catch a glimpse of Joshua’s first visit to Baselworld and see Eberhard & Co. CEO Barbara Monti and managing director Mario Peserico awarding him the Eberhard & Co. Traversetolo he won as a prize.

To read Joshua’s very first article for Quill & Pad, please click “What’s Friction Got To Do, Got To Do With It!?”