One of the pillars of Girard-Perregaux’s collection in the modern era – which I define as beginning with Luigi Macaluso’s purchase of it in 1992 – has been the Tourbillon with Three Gold Bridges.

This tourbillon, which was created in 1867 by Constant Girard, has such an unusual design that it remains symbolic of the Swiss brand to this day. Naturally, the Three Gold Bridges Tourbillon has experienced a number of evolutions over the years to keep it interesting.

But none quite so radical as what we saw at Baselworld 2014. At Baselworld, Girard-Perregaux presented the Neo-Tourbillon with Three Bridges, a relatively profound re-issue of an old favorite. While it retains the original codes and architecture of Constant Girard’s oeuvre, the major changes that have occurred – but which are not so obvious when taken individually – have to do with the shape of the bridges, the crystal, and the completely redesigned caliber. All of which endow this timepiece with a much more avant-garde, post-modern spirit. The bridges, now made of titanium, were redesigned to accommodate the desire for extra three-dimensionality, while skeletonization has visually lightened the appearance. Beadblasting and coating the bridges with black PVD provides an ultra-modern touch, particularly against the background of the base plate’s gray color, which has been achieved by first electro-plating with anthracite-colored ruthenium and then beadblasting. The titanium tourbillon cage is now larger at 14.44 mm in diameter and the tourbillon itself comprises 80 components in total. Its unusual shape echoes that of its historic lyre-shaped cage. Naturally it is finely finished as a tourbillon cage should be, and it goes without saying that this extremely difficult to achieve in titanium. The variable balance has been electro-plated a black color to stay consistent with the post-modern feel of the entire caliber. A bridge on the back of the Girard-Perregaux Neo-Tourbillon

Turning the watch over, one spies the long arrow-shaped bridge crossing the full length of the plate that repeats the bridge theme on the dial side. 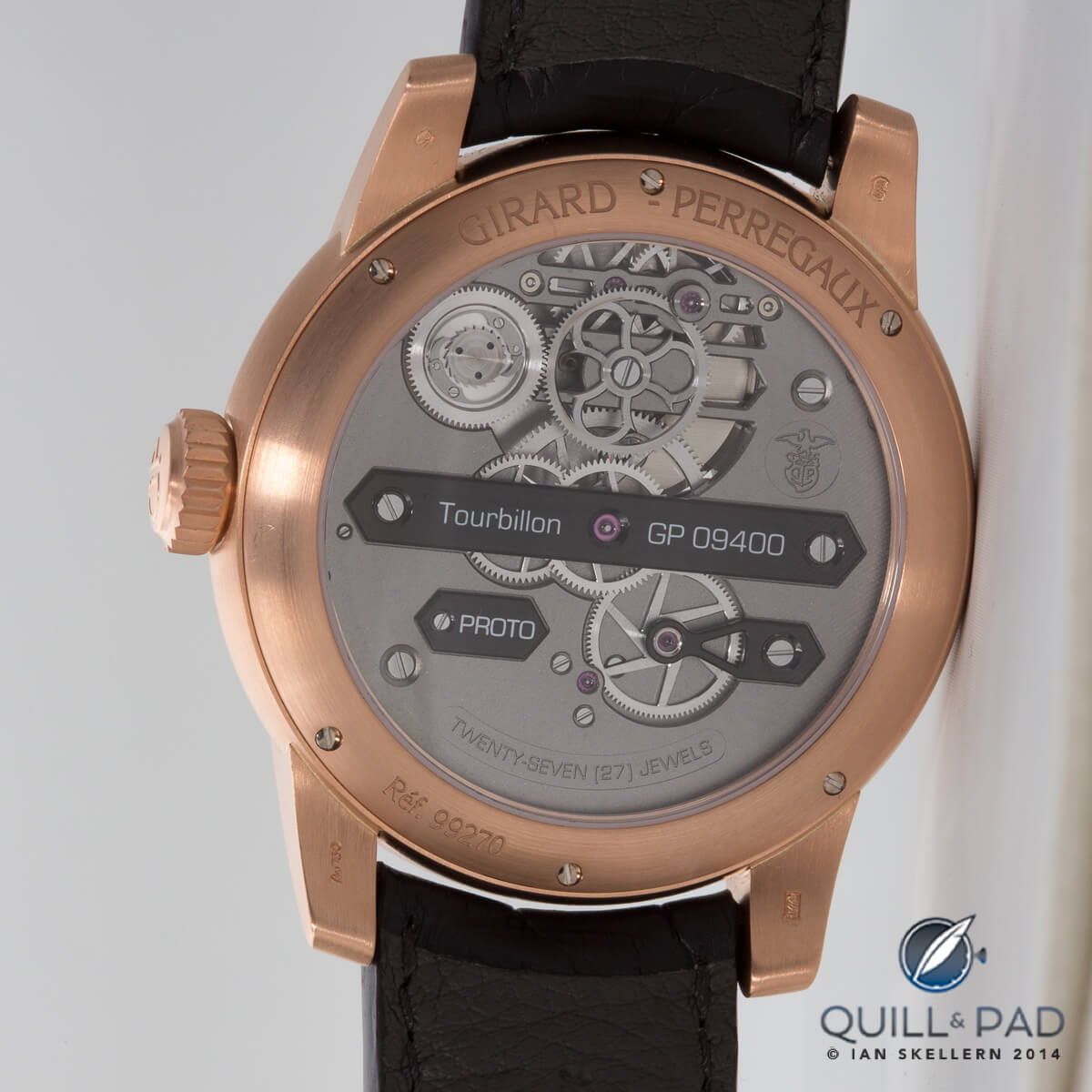 Peering through the display back of the Girard-Perregaux Neo-Tourbillon