* Girard-Perregaux releases a rose gold version of the Chrono Hawk chronograph in a 44 mm case with black ceramic bezel. Water-resistant to 100 meters, it is powered by automatic Caliber GP03300-00-76. The Armin Strom team trying its hand at the casino

* In honor of its participation in the Las Vegas watch shows, which kick off today, Armin Strom has crafted a very unique hand-wound tourbillon called Royal Flush in a 43.4 mm 18-karat rose gold case. While the skeletonized looks of the front of this watch offer the usual gorgeous aesthetics this brand is known for, the back shows its hand: an engraved royal flush poker hand on the base plate. All bets are now off: this one-off piece is seriously cool! * Just in time for the release of the Hollywood film Grace of Monaco, Roger Dubuis introduces two apt new limited editions in the form of the Monegasque Big Number and Club models. The Club, an automatic chronograph, is housed in a 44 mm black DLC-coated titanium case with rose gold bezel. The automatic Big Number comes in a 42 mm rose gold case. Both are limited to 188 pieces and have the “gaming” look this line is known for. 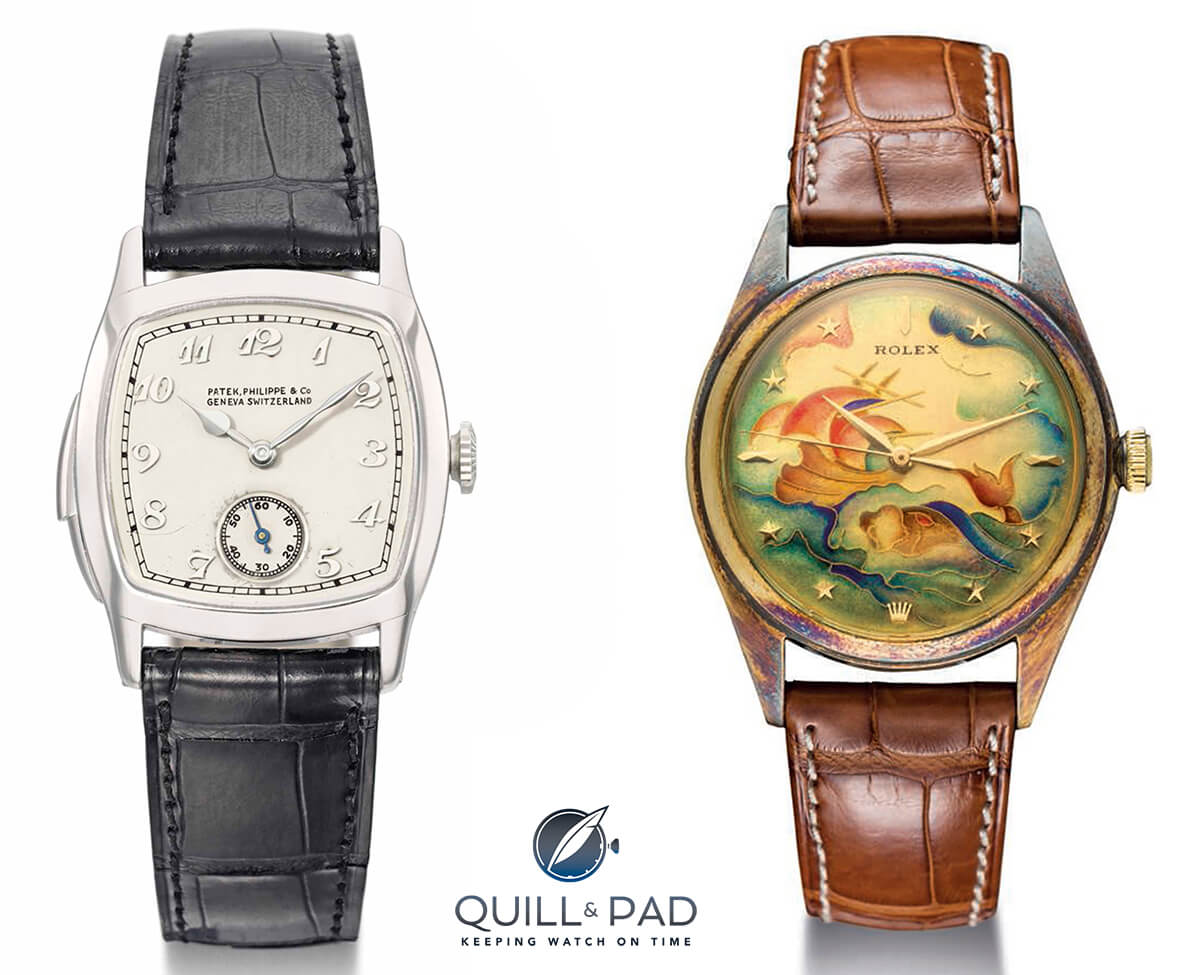 * Geneva’s renowned auction week took place during the month of May, and several interesting timepieces changed owners. Christie’s top lot was a cushion-shaped Patek Philippe minute repeater in platinum made for Henry Graves, Jr. The price hammered was CHF 1,205,000 (US$1,340,804 / €974,725). This sale including 435 pieces attracted bidders from 30 different countries. Additionally, an exceptional gold Rolex with a cloisonné enamel dial sold for CHF 1,097,000 ($1,220,632 / €887,363), reaching a new world record for any Rolex sold at auction.

Sotheby’s set the all-time record for any vintage Officine Panerai during the same week. A stainless steel Luminor diver’s model from 1955 belonging to the recently deceased Admiral Gino Birindelli of the Royal Italian Navy hammered for CHF 425,000 (approx. €348,000 / $478,000). Lots on exhibition at the Crott auction

To see what was sold at Germany’s Dr. Crott auction house that week, please read Attending An Auction With The Intent To Buy – And What Happened Next.

* Additionally, Christie’s launches its own retail presence as “an online retail boutique of rare, vintage and luxury timepieces.” This space offers a selection of at least 30 watches at any given time with set prices and no additional buyer’s premium. The watches are meant to be taken home immediately. onlineonly.christies.com/p/collecting-luxury-watches-with-christies-rolex-patek-phillipe-more/1 * Franc Vila launches a new edition of its original Caliber FVi17 Chrono Bicompax Intrepido, which was designed to exude more of a vintage feel than his timepieces thus far. Housed in a brushed case of Vila’s own DieHard Extreme Steel, one is immediately drawn to the bright color of the dial inspired by the deep blue of the Mediterranean Sea. It launches in a limited edition of 88 pieces.

* The Patrouille des Glaciers, a race organized every two years by the Swiss army in which both military and civilian teams compete, is considered one of the toughest mountaineering endurance ski races in the world. Seven hours and 27 minutes after leaving Arolla, well-known Swiss watch retailer Jean Nicolas Michaud and his team completed the most grueling alpine sporting event in Switzerland. Accompanying him on his wrist was the Breva Génie 02 dual altimeter; they both accomplished a vertical climb of 1,900 meters (6,233 feet) during the race.

* MB&F has actively participated in the new A.H.C.I. sponsoring program and become a corporate partner of the organization, a very laudable act! Corporate partnerships enable the A.H.C.I. to preserve and promote the unique character of handmade timepieces, to attract the creative independent clock and watchmakers, and to support young talents. Learn more about A.H.C.I.’s sponsoring program at www.ahci.ch/sponsoring.

* You can also see the A.H.C.I. in action at Beyer in Zurich until June 6. Find more information here: www.forbes.com/sites/elizabethdoerr/2014/05/09/unique-exhibition-of-independent-a-h-c-i-watchmakers-works-in-zurich/

* The 2014 edition of the Grand Prix d’Horlogerie de Genève is now calling for entries! While the jury is to be announced in early June and the selections go up after that, we already know the next rendition of the jury will include 24 members, about a quarter of which will be different from last year’s jury. It will still be headed by Aurel Bacs, formerly director of watches at Christie’s. The 2014 categories will include new ones such as Tourbillon, Calendar, Ladies’ High-Mech, and Mechanical Exception. www.gphg.org/horlogerie

* Jason Heaton provides an exquisite overview of depth gauge watches on Hodinkee. Have a look at it here: www.hodinkee.com/blog/two-instruments-one-wrist-depth-gauge-dive-watches