You are here: Home1 / Articles2 / Watch Brands & Horology3 / Hublot4 / The Secret Link Between The FIFA World Cup And The Hublot Antikythera ...

Reader beware: what you are about to read is a “what if” work of fiction. As such, some claims are not scientifically accurate and some are total fiction. This is fun based on current events and history. Just go with it.

Ahh, World Cup football. Sorry, America, but most of the world calls it football, not soccer. I know you love your NFL, but let’s face it: that’s just a local phenomenon.

What’s that? You mean you really think the Seahawks are the “world” champions? More than 111 million people watched the last Super Bowl and that’s nothing to scoff at, but World Cup viewership is in the billions.

Total viewers for just the final game of the 2010 World Cup was somewhere around 909.6 million, not including online and public spaces, which probably pushes it to well over one billion people watching a single event . . . simultaneously!

It is truly a global phenomenon, with nearly every country in the world eagerly watching and cheering for their beloved teams. And if you are alive and breathing right now, you might know that we are deep into the 2014 World Cup.

Running for a full month, the World Cup pits the 32 qualifying teams from the six world FIFA divisions against each other, beginning in a round-robin style tournament before moving to a single elimination round.

Each match is already proving to be a nail-biter, and the teams are fighting for any edge they can get. Just imagine if they had all the answers to what would happen in a match?

This would allow them to change their strategy, know what plays to try, and who to cover most.

Wouldn’t that be the Holy Grail for a coach?

Enter Hublot, the official watch brand and timekeeper of the 2014 FIFA World Cup. By the way, “Hublot Loves Football,” or at least that’s what the brand’s World Cup campaign claims.

But the brand has also secretly created a timepiece that could change the game for whoever holds it: as it has the power to predict and influence the future!

No one has yet discussed this in public because it was actually part of a secret internal program at Hublot, which began around 2008 when the creative minds decided to take a page out of history and create a machine able to give a competitive advantage to a team looking to take the next World Cup by storm. What piece could this be, you ask? Well, its secret code name was the “Ship of Dreams” project, but you may know it by its more public name: the Antikythera watch. The original Antikythera mechanism found off Greece in 1901

Now available in a second version called the Sunmoon, Hublot’s Antikythera is a modern attempt to recreate the ancient Antikythera mechanism, which was discovered in 1901 off the coast of the eponymous Greek island. (That bit is actually true.)

Now known to be the earliest analog computer, dating to 150 BCE, the Antikythera mechanism was a complicated system of gears that calculated astronomical positions and eclipses based on the calendar date. (Also true.)

It really is an amazing machine, and Hublot wanted to honor the past and build a wristwatch version providing all of the same astronomical calculations as the original. Obviously succeeding, the project was openly labeled a historical exercise and way to publicly highlight the history of Greece and the shipwreck. (True.)

But behind closed doors, there was indeed an ulterior motive. It would be a tool to predict the future winners of World Cups.

“What a ludicrous claim that is!” a skeptic might say. But let’s string together the “facts” as we know them and you will see why this isn’t so far-fetched.

First things first: the Antikythera mechanism was an astronomical tool used to show celestial positions and moon phases and predict eclipses, corresponding them to the Egyptian calendar and Greek zodiac. (True.)

It also calculated the timing for the ancient Olympic Games. It allowed for the precise setting of the day and year once the current year setting was known. With this information, a litany of astronomical data was then available to the user.

This data was used by ancient astrologists, the forerunners of modern astronomers, to understand the current state of the universe and what events could be expected to take place. This knowledge covered everything from when to plant crops, who may make a good wife, and what the score of the big game would be. Oh, yes, they had a big game. Lost to history but recently discovered, the ancient Mediterranean peoples also played football, and for thousands of years the goal of every team and nation-state was to win the prestigious Calicem Graecia: the Cup of Greece.

So not only did Greece originate the Olympic Games, this nation was also the inventor of the ancient World Cup, though to them the world was much smaller than it is now. That means that Olympic Games calculation on the Antikythera mechanism was also probably used to determine the timing of the Calicem Graecia.

As a side note, almost every major war in the Mediterranean was not actually about power and control, but instead stemmed from intense rivalries between neighboring teams. Are you blind, Refolus? It was in!

The Trojan War began because an ancient referee wrongly disallowed a goal in a semifinal match giving the win to the Royal Troy F.C. and Greece United refused to accept the defeat. After a terrible ten-year siege on the city of Troy, the infamous Trojan horse ruse was used to gain access to the city and reclaim the ill-gotten Calicem Graecia.

Clearly, there is a history of intense athletic competitions, and as such, cities and nation-states looked for every edge they could. And so we come to the Antikythera mechanism. Invented to aid in complex calculations regarding the positions of the planets, moon, sun, and to help determine eclipses, for wily astrologers this machine was a pocket match predictor.

When certain planets were in alignment, and an eclipse was a certain number of days out, it would agitate certain gods, be they the Olympians, Titans, Satyrs, demi-gods, or even Nymphs and underworld Furies. These beings controlled the outcomes of all matters of life, and, like the World Cup today, few matters in life exceeded the importance of the final match of the Calicem Graecia.

So it was in your best interest to know which god would be agitated during your team’s upcoming match, and you could then take appropriate measures to appease the upset gods to tilt the odds in your favor.

Instead of having to make lengthy calculations with the inherent risk of transposing a number incorrectly or carry a one accidentally, the Antikythera mechanism did the calculations and provided a clear picture of the strategy that would best support a team’s goal.

In a way, you could say that people were working with inside information to bribe the officials in the sky. Everyone could, and usually did, try this tactic, but knowing well in advance by mechanical means usually meant the cities and nation-states that invested in Antikythera technology were consistently highly ranked in tournaments. An object lost to time

Thanks to the fall of many empires and objects lost through time, this part of history stayed hidden from those seeking to gain a strategic edge in football matches.

Hidden, that is, until the discovery of the Antikythera mechanism in 1901.

Fast forward 107 years to when Hublot finally had enough information to understand the importance of such a machine and the knowhow to build one.

There were only four examples of the original Hublot Antikythera watch, and only one of those is going up for sale in an auction to raise money for the Archaeological Museum of Athens.

But here is the rub: that piece has yet to be auctioned off, so it remains to be used to influence and predict a World Cup. And possibly that is the idea.

Unless the piece is auctioned in the next couple weeks, I believe it is being held back to entice the teams that don’t make their World Cup dreams come true. This way, in the crushing aftermath of losing the World Cup, nations will line up to pay whatever they can to get their hands on that timepiece, the only complete reproduction of the Antikythera mechanism available to the public, and the key to winning in the World Cup 2018. 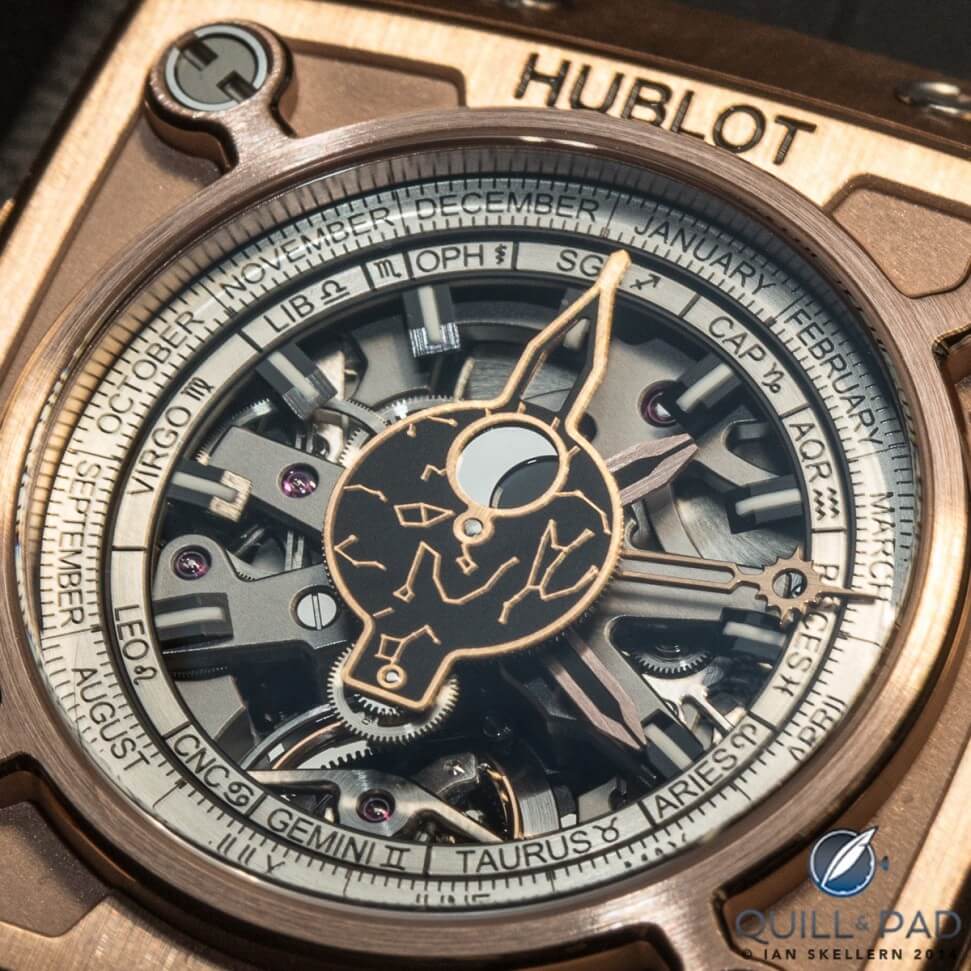 The newest model, the Antikythera Sunmoon, is a simplified version of the original, only utilizing half of the original complications. This, of course, makes the Sunmoon a more wearable and useable timepiece, but not a match predictor like its predecessor.

Both pieces are incredible and the movements are amazing, but in the end there is only one with the power to change the future of the World Cup.

I imagine by now you can clearly see why these watches are so important, and why the owner of the original Antikythera wristwatch will be in on the secret that Hublot has kept until I blow the lid off with this exposé. The Hublot Antikythera Sunmoon on the author’s wrist

I know Hublot might have wanted this secret kept indefinitely, but I find it is my duty to share information I can when I discover ancient sporting science being used in current competitions.

For more information (and a jolt of reality), please visit www.hublot.com/en/watches/mp-08-antikythera-sunmoon.