* American golfer Cristie Kerr joins the ranks of Richard Mille’s ambassadors. Having turned pro at age 18, she boasts 16 victories on the Ladies Professional Golf Association (LPGA) tour and also has the honor of having been the first American woman to top the World Golf Ranking. She will be wearing a titanium RM 007 while playing, so watch out for it during the Lacoste Ladies Open in early October, which Richard Mille also sponsors. * Jaeger-LeCoultre announces the new Master Grande Tradition Grande Complication, which is destined to premier at Watches & Wonders, held late September in Hong Kong. Available only in an eight-piece, 46.7 mm white gold limited edition, this gem-set masterpiece includes a minute repeater, flying tourbillon and a zodiac calendar with sky chart. It also had to pass the manufacture’s 1000-hour chronometer test. The case is set with 294 diamonds (19.8 ct), while the dial boasts aventurine set with diamonds and a lacquered guilloche flange. * Continuing its series of exceptional chiming watches, Ulysse Nardin introduces the Jazz Minute Repeater featuring fine, hand-engraved, 18-karat white gold jaquemarts against a backdrop of a genuine onyx for the dial. This manually wound timepiece is housed in a 42 mm platinum case and is a limited edition of just 18 pieces * La Montre Hermès presents a colorful dream of a watch dedicated to the “Orient.” French lacquered Persian horses come to life within the confines of a beautiful white gold 41 mm Arceau model driven by a manufacture automatic Hermès movement in a limited edition of 24 pieces. Three dials showcase the beautiful work of a skilled artisan using fine-tipped brushes to apply a full 30 coats of lacquer – resulting in several weeks’ worth of work.

* Moser & Cie. previews its new Venturer Tourbillon Dual Time, which will be officially launched in September. For now, all we know is that it is an in-house tourbillon outfitted with a Straumann double hairspring and that the escapement is part of an interchangeable tourbillon module within the caliber. For the rest, we’ll just have to wait and see. * F.P. Journe introduces a new addition to the LineSport collection: the Octa Sport in grade 5 titanium. The movement and dial are made of an aluminum alloy, which enables the watch to weigh in at only 60 to 70 grams (depending on the titanium bracelet or rubber strap). Housed within the 42 mm titanium case with rubber inserts is a titanium rotor boasting a tungsten segment, its added mass helping to keep the 120-hour power reserve topped up. * Omega launched the commemorative Speedmaster Apollo 11 in honor of the 45th anniversary of the brand’s ambassador, Buzz Aldrin, taking his first steps on the moon. Its look recalls the iconic chronograph that was part of the original lunar adventure while the colors are reminiscent of the moon and the Apollo 11 lunar and command modules. This limited edition of 1,696 pieces is housed in a 42 mm brushed grey grade 2 titanium case accentuated with a touch of gold. 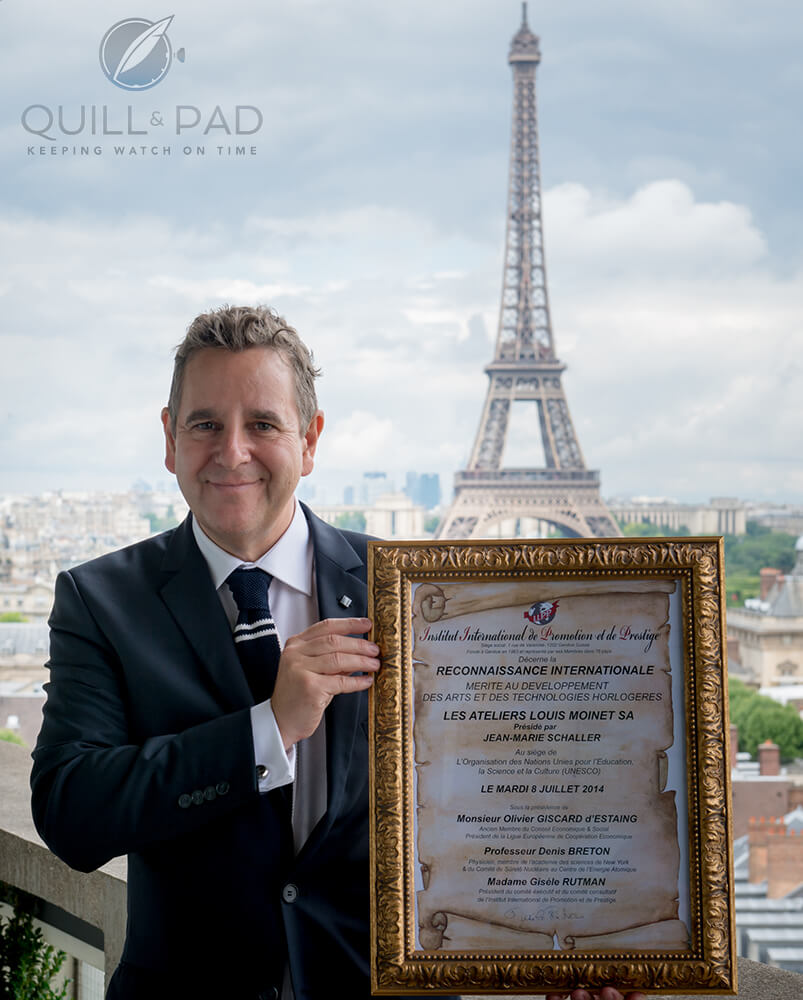 Jean-Marie Schaller, founder and creative director of Louis Moinet, with the Merit for Development award

* Just in time for Louis Moinet’s tenth anniversary, the brand received a Merit for Development award from the International Institute for Promotion and Prestige (IIPP) in cooperation with UNESCO. The prestigious prize is awarded to companies for extraordinary achievements; according to Louis Moinet this is the first Merit for Development of Watchmaking Arts and Technologies.

* The Swatch Group just released its half-year report for 2014, and there are some interesting stats that surely reflect the watch industry at large. Its operating profit of CHF 830 million was 8.8 percent lower than the previous year, partly due to the negative currency exchange rates. Additionally, the group experienced a high level of marketing expenses for the Olympic Games in Sotchi, as well as the fire that took place at ETA on December 29, 2013. Nonetheless, the group’s operating margin still reached 20.2 percent.

The group’s gross sales were up 8.5 percent to CHF 4,535 million at constant exchange rates, or 4 percent to CHF 4.347 million at current rates. Gross sales rose more than 10 percent in the watch and jewelry segment at constant exchange rates, including a growth in production of 8.8 percent despite the fire at ETA, which negatively impacted sales by approximately CHF 200 million according to the Swatch Group’s spokesperson.

Now part of the Swatch Group, Harry Winston made further significant investments in terms of widening its product range in high jewelry as well as the new watch collection presented at Baselworld 2014 (which will be available in retail stores in the second half of 2014).

In the production sector, a new production facility in La Chaux-de-Fonds will start operation in August to manufacture Universo hands and Rubattel & Weyermann dials.

* Kering (previously PPR, Gucci Group) has renewed its management structure within its watch and jewelry division, which sees the placement of a dedicated CEO for each brand as of October 1. Michele Sofisti will become the CEO of Gucci Watches and Jewelry only, while the Sowind Group, which includes Girard-Perregaux, will receive a new CEO. According to a Kering press release, in three years Sofisti has modernized Sowind’s production and efficiently reorganized the product palettes of both Girard-Perregaux and JeanRichard, clarifying both brands’ identities and positions.

* According to National Jeweler, LVMH has reached a settlement in a long-running court battle that began in 2008 with eBay over the sale of counterfeit goods. Back in 2008, a French court ordered eBay to pay LVMH €38.6 million in damages as it found that the online auctioneer was not doing enough to prevent the sales of fake goods. www.nationaljeweler.com/majors/online-retailing/LVMH-eBay-reach-set-4856.shtml HYT has launched the H1 Iceberg, just the thing to keep you cool for summer. Iceberg’s ring of bright blue liquid indicating minutes contrasts beautifully with a background of white: white dial, white Super-LumiNova hour hand and white rubber strap. Check out The Watch Lounge for a good write up with live photos: thewatchlounge.com/hyt-watches-h1-iceberg-hands-live-pics-pricing.