* Hong Kong’s Watches & Wonders will be upon us at the end of September and for it Audemars Piguet announces a new Royal Oak Offshore Selfwinding Tourbillon Chronograph outfitted with a peripheral oscillating weight that is visible through the dial. Available only in a limited edition of 50 pieces, it is housed in a 44 mm forged carbon case with a black ceramic bezel, crown and buttons and is set to retail for $273,200.
For more information, please visit www.audemarspiguet.com/en/go-offshore and watchesandwonders.com. * Jaeger-LeCoultre friend of the brand Clive Owen has been spotted wearing a platinum Master Grande Tradition à Tourbillon 43 during promotion for his new series The Knick; here we see him on The Tonight Show With Jimmy Fallon. Set in downtown New York in 1900, The Knick is a Cinemax doctor drama series. * In its unending quest to participate in the world’s biggest sporting arenas, Hublot has now signed an exclusive deal with what is unquestionably the most famous American football team: the Dallas Cowboys. The partnership begins with three limited-edition Dallas Cowboys-branded timepieces (Classic Fusion and King Power) inspired by the team’s corporate colors of blue and silver. Celebrating the Cowboys’ five Super Bowl wins, the Cowboy star replaces the “5” on each dial, with the women’s timepiece boasting a star set in diamonds.

These special editions will be available exclusively at retail locations in the Dallas area, Hublot’s Dallas boutique and a new pop-up location in the Cowboys’ Owner’s Lounge at AT&T Stadium. Hublot is now the “naming rights partner” of the VIP parking entrance, and Hublot clocks will adorn the stadium walls, while the jumbotrons above the field will feature an Hublot clock for pre-game countdowns. hublot.com/en/partners/dallas-cowboys MusicMachine 2 by MB&F for Reuge

* MB&F presents MusicMachine 2, an ultra-modern music box created in cooperation with Reuge. This spaceship-inspired object plays theme songs from Star Wars and Star Trek, but instead of the same three rock tunes that MusicMachine 1 offered, it boasts a new selection of rock classics from the Rolling Stones, Led Zeppelin and The Clash (very good taste –ed).  mbandf.com/machines/performance-art/musicmachine2 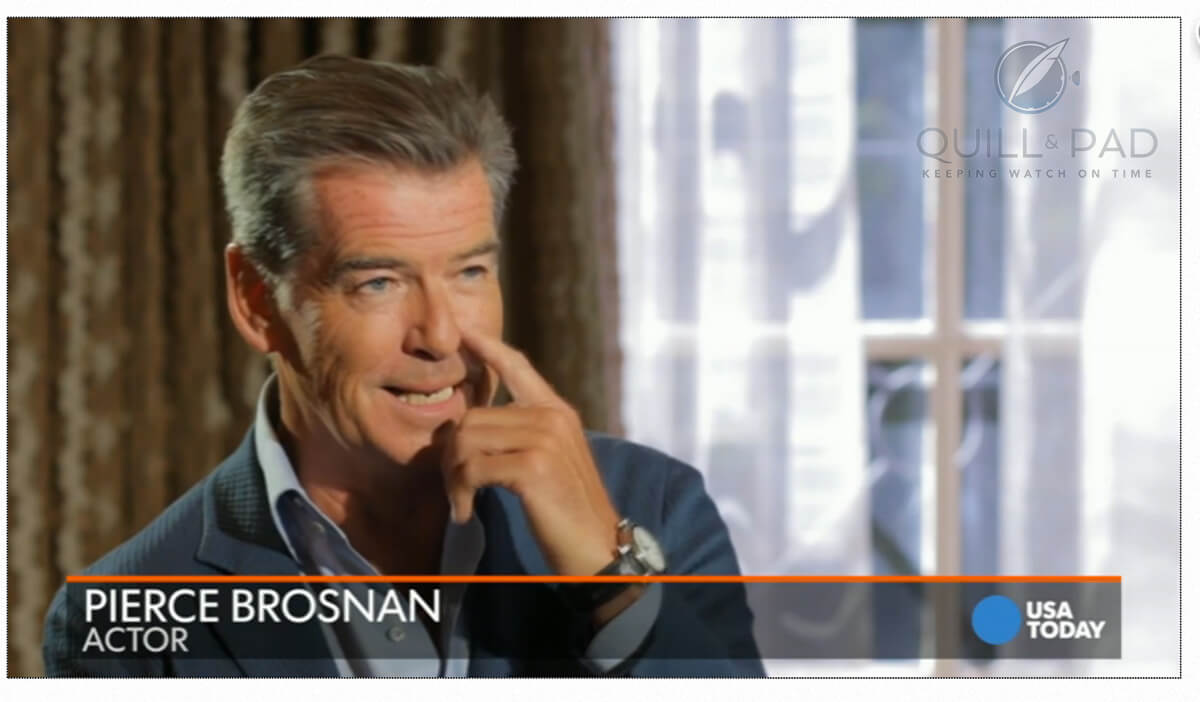 * During a brief video interview this week on USA Today‘s “Talking Tech,” actor Pierce Brosnan was spotted wearing his Speake-Marin Resilience as he explained his fondness for Instagram. www.usatoday.com/story/tech/columnist/talkingtech/2014/08/26/pierce-brosnan-on-how-to-get-10000-followers-on-instagram-save-the-world-4-times/14534125/ * Arnold & Son releases two new versions of the UTTE tourbillon, an exceptionally clean and thin tourbillon with an off-center time display. The new versions include red gold or palladium cases, which measure 42 x a shockingly thin 8.34 mm, making this one of the thinnest tourbillon watches on the market. The appearance of technical wizardry is enhanced by the large spherically formed tourbillon whose cage measures an impressive 14 mm. Taking up almost half of the 32 mm that the movement measures, the effect is nothing short of dramatic.  www.arnoldandson.com/home/instrument-collection/utte/ 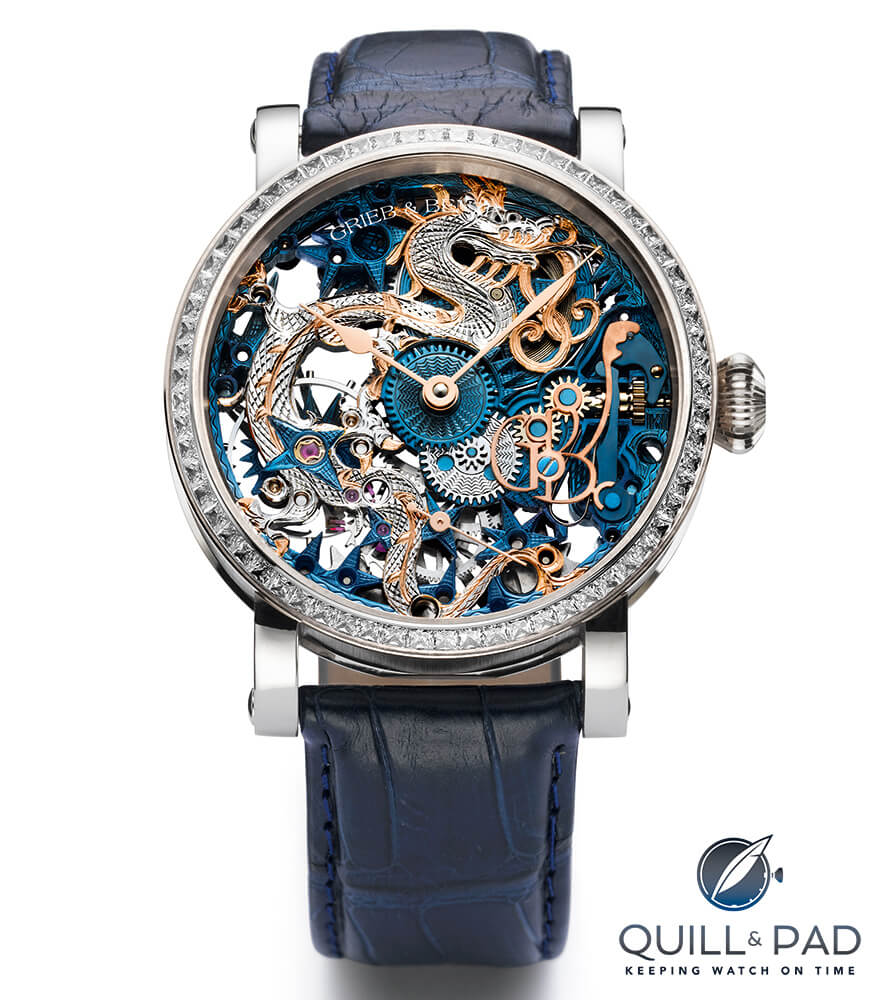 * Grieb & Benzinger presents a special unique piece called Blue Dragon Imperial, which features a fully skeletonized dragon within a movement that seems to float within the white gold case framed by 66 Princess-cut diamonds. The blue platinum-coated movement is a very rare specimen indeed: it is an original blue movement made by Charles Oudin in about 1820 specifically for the Chinese market. * Jaquet Droz releases the latest iteration of the Grande Seconde Quantième Ivory, originally introduced in 2011, whose beautifully finished movement now incorporates a silicon balance spring. While a look through the transparent case back reveals sheer modernity, the front remains traditional and typical of the brand. This watch is available in 39 or 43 mm case sizes in red or white gold. The dial is grand feu enamel. Watch this interesting TheWATCHES.TV video to see more: www.thewatches.tv/en/editorial/jaquet-droz-grande-seconde-quantieme/. * A Daniels Millennium watch came up for auction at Bonhams a few weeks ago and proceeded to set a world record for the sale of one of these rarer-than-rare timepieces. Made in an edition of only 50 pieces between 1998 and 2001, the Millennium watch was a collaboration with Roger Smith and is the only serial timepiece that George Daniels ever created. The original yellow gold automatic timepieces sold for £30,000 upon release. The Bonhams lot went for £146,500.  www.rwsmithwatches.com * On the occasion of the grand opening of its new headquarters in Lucerne, Switzerland, Chronoswiss announced the charity auction of a 44 mm red gold hand-enameled and -guilloche timepiece called Sirius Lion Heart in October. All proceeds from this watch will go to the Make-A-Wish Foundation in Switzerland. www.chronoswiss.com/en/lion-heart.html