In all of my years as a watch journalist – which has been an entire adult lifetime – a watch company has never yet provided me with the experience of being so close to an artist and his work over the course of several days. This immersive involvement and environment allowed me to thoroughly understand the essence of Theo Jansen’s art in the space of a few pleasant days spent at Art Basel Miami.

First of all, I would like to express an emotion: hats off to Audemars Piguet for taking its marketing so seriously down a route that allows the brand to become so intricately involved with such a worthy endeavor.

In my opinion, art as an expression of the human condition should always be supported.

Until now, this has not been a course of action necessarily taken by many watch manufacturers. In support of art

For the last two years, Audemars Piguet has been a global associate partner of Art Basel. Having never attended this event in any of its locations – Basel, Hong Kong or Miami – I was quite unsure as to the reason for the Le Brassus-based brand’s involvement.

Now having attended Art Basel Miami Beach courtesy of Audemars Piguet, I totally and completely understand the attraction. Above and beyond the obvious environment that includes many solvent potential clients, there is the added bonus of having one’s own little ticking oeuvre associated with famous contemporary and classic artworks.

“And artists are able to see the world differently,” Olivier Audemars, vice-president of the board, told me during Art Basel Miami. “They provide new views.”

Almost more importantly, Audemars Piguet has extended its involvement from solely being a sponsor of Art Basel Miami to actively taking part in the world of art by choosing one artist per year to support. From the outside, Jansen with his kinetic “sculptures” and predilection for correlating the creation of his “animals” to the work of a watchmaker already looks like the perfect choice for a luxury watch company. 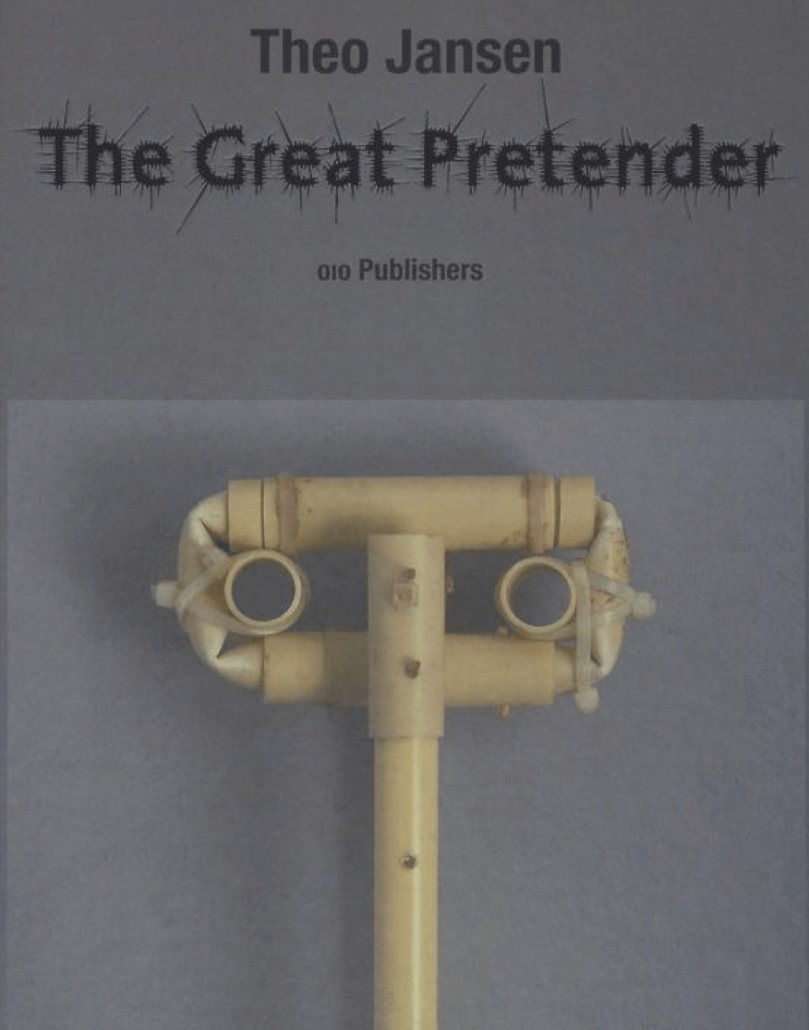 The cover of Theo Jansen’s book, ‘The Great Pretender’

Indeed, in Jansen’s own book, The Great Pretender, as well as his favorite book, The Blind Watchmaker by Richard Dawkins, he uses what’s known as the “watchmaker analogy” to compare evolution to a watch.

In case you’re not familiar with the watchmaker analogy in teleological argumentation – which pits an intelligent creator against random evolution – you’re not alone.

Philosophically, the analogy dating back to Cicero’s De Natura Deorum states that the complexity of the watch’s movement necessitates an intelligent designer. Functioning as a rhetorical device, it stands for the complexity of a given natural phenomena. Dawkins refutes the watchmaker argument by explaining that neither complicated watches nor complicated life appeared fully formed by chance but –  like Jansen’s Strandbeests – slowly evolved from much simpler forms. Once you’ve had the pleasure of spending time with Jansen and his works, you understand that what drives him isn’t the notion of art. Nor is it necessarily the notion of symbolism through art.

The Dutchman’s intent is nothing less than recreating the adventure of life by “playing God.”

The evolution of Jansen

Though the 66-year-old Jansen, who is a qualified physicist, has attained a degree of fame through his Strandbeests, he conceived two higher-profile projects before he began with his beach animals in 1990.

In 1979, he used the same type of PVC tubes that he uses to make the Strandbeests (he says they are a cheap, common material in Holland normally used to protect electrical wiring) to construct a four-meter flying saucer filled with helium that he flew over Delft.

It was initially thought to be a real UFO by many and apparently caused quite a stir.

From 1984 through 1986 he concentrated on a “painting machine” that created two-dimensional, spray-painted images of objects and people around it.

From 1990 onward, Jansen – who was a painter in the 1970s and has also written weekly columns for Dutch newspapers as well as books – has put all of his aeronautical, robotics, physics and engineering experience into the artificial animals that live on the Scheveningen beach in the Netherlands that he calls home. Hearing Jansen speak, one thing pops right out at you: he talks about the Strandbeests as if they were his children or his creations.

They are not inanimate to him. While to the uninitiated, this could sound like shtick, I decided that it wasn’t.

The Strandbeests are life forms to Jansen. Their skeletons comprise the yellow plastic PVC tubing, and their energy comes from the wind, which means they don’t have to eat like regular animals. They evolved over many “generations” so that they have become increasingly adept at surviving storms, splashing waves, and sand mucking up their joints. The latest generations of Strandbeest are outfitted with a gland system so that the sand can no longer get stuck in the joints.

Strandbeests move on compressed and fresh air using small sails and the plastic bottles that form the guts or stomach of the beasts. Generally, this is wind found on wild, ocean-bordering beaches. Air can also be manually pumped into the plastic bottles forming the guts in a pinch.

Ultimately, Jansen’s wish is to be able to release herds of the animals on the shore where they can autonomously “live” without him – though he does note that humans will have to help take care of them after he is gone (for repairs, etc.). His inspiration for making and evolving the Strandbeests all these years is to “re-do” creation, hoping to become wiser about the existing nature of life by encountering the same sorts of problems that the “real creator” had to face.

“Strandbeests” translates as “beach animals,” and these loosely resemble prehistoric creatures that are mesmerizing to look at when they stand still.

When they move, however, they are nothing short of hypnotic. While Animaris Suspendisse is now “extinct” according to Jansen’s taxonomy – he declares them extinct or a fossil when he deems their time is up – he managed to at least partially reanimate the beast for Art Basel Miami.

In fact, the reactions of people around me as Jansen pumped compressed air into Animaris Suspendisse, causing the tail to wag and the legs to scrabble, ranged from amazement to slight horror depending on how familiar the person in question was with Jansen and his work.

Each new generation of Strandbeest features new functionality, and the current generation – the seventh – can now detect its surroundings, change course when obstructed and possibly even carry passengers (though this was not demonstrated in Miami Beach).

I would not describe Jansen solely as an artist, but rather as something combining artist, biomechanic, evolutionary theorist, theologist and, yes, philosopher.

Is it possible to enjoy the Strandbeests on a less cerebral level, though? I quite think so, particularly as I heard Jansen answer a question as to people’s reactions in the U.S. like this: “When people see the Strandbeests, they somehow start smiling.” “I can feel the connection,” Jansen said of a visit to Audemars Piguet’s factory in Le Brassus before continuing about the connections between his work and his sponsor’s. “It certainly is something that these people have [the same kind of] passion for mechanics as I have. The watchmakers at Audemars Piguet are so passionate about their work. I would say this is a company that is not as commercial as normal companies that just want money. This company radiates something like noblesse oblige. I think it is a good companion to my works.”

Thanks to partnerships with Art Basel, Jansen and the next sponsored artist due to be named in about three months, Audemars Piguet can now look forward to being associated with an entirely different group of affluent consumers thanks to its new connection with the art world. Some of whom are perhaps searching out real values – and, who knows, perhaps even the meaning of life – rather than solely expensive objects that exude a preconceived notion of good taste and/or wealth.

For further reading on the subject and above all to see hundreds of gorgeous black-and-white photographs of the Strandbeests, I highly recommend Lena Herzog’s new book, Strandbeest The Dream Machines of Theo Jansen, which includes an essay by Lawrence Weschler and a foreword by Trevor Smith of the Peabody Essex Museum, one of the oldest museums in the United States.

Herzog, a documentary and fine art photographer, accompanied Jansen and his work for seven years. The Peabody Essex Museum has organized a year-long tour of the Strandbeests in the U.S.A. starting in 2015. The Art Basel Miami Beach exhibition previews Jansen’s first major U.S. tour.