You are here: Home1 / Articles2 / Luxury, Experiences, Science & Nature3 / Science4 / Is This The World’s Oldest Known Watch? A Peter Henlein Mystery From...

Is This The World’s Oldest Known Watch? A Peter Henlein Mystery From 1505

It’s a story that could have come out of a thriller novel, and it’s about one of the oldest known watches in the world, which has is thought to have been made in 1505 by Peter Henlein. .

This is not the famed Nuremberg Egg (Nürnberger Ei) that was previously thought to be Henlein’s first confirmed work. This watch I am talking about here has been dubbed the Pomander Watch (Bisamapfeluhr) and it was confirmed as the oldest known watch at a press conference that took place on December 2 in Nuremberg, Germany. This apple-shaped watch (or small portable clock) first surfaced in 1987 thanks to a watchmaker apprentice, who found it at a London flea market in a box filled with spare parts and metal bits. He had bought the entire box full of items for 10 pounds and only discovered the unusual timepiece among the objects later.

In 2002 he sold it. After a specialist for renaissance timepieces declared it a forgery or a copy of the original, the next owner sold it too. The nagging question of its authenticity remained with its latest (anonymous) owner, though, causing him to engage in further research.

And it was a good thing, too: as it turns out, he was in possession of what may be one of the world’s earliest known portable timepieces. 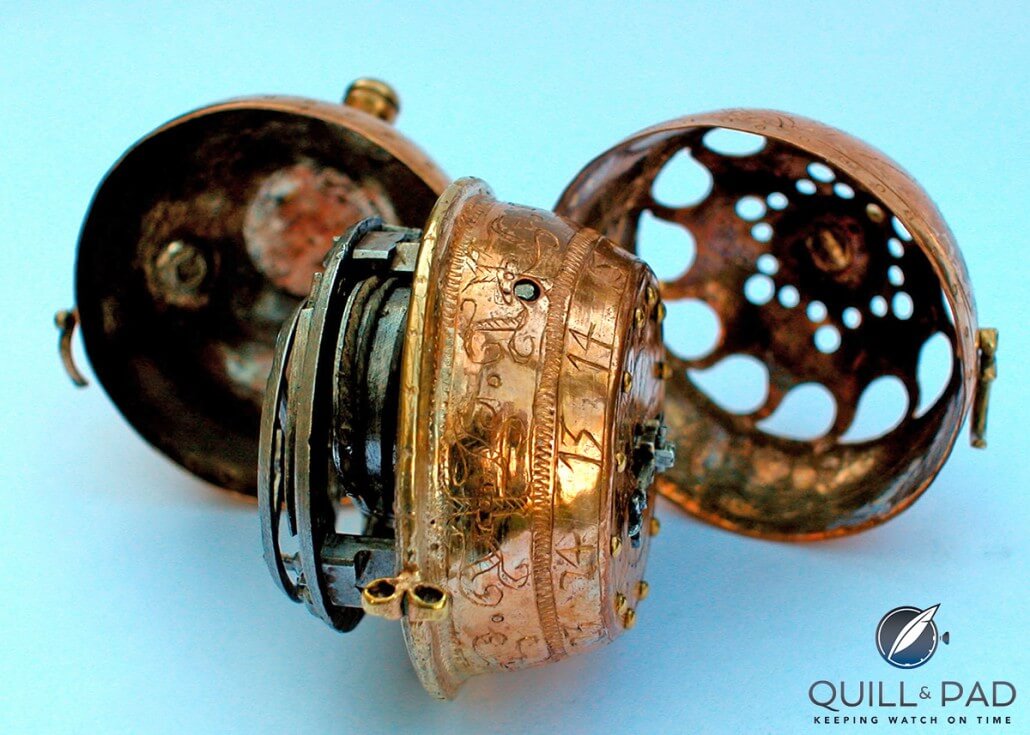 The Pomander Watch disassembled into its constitute components (credit: www.peterhenlein.de)

The shape of the case was attributed to Henlein through documentation of previous work. The copper and gold plating of the case was examined using a laser micro spectral analysis, which provided the time period.

Inside the case under the dial an engraving was found displaying the letters M, D, V, P, H, N. This has been interpreted as “1505” (MDV in Roman numerals) and “Peter Henlein Nürnberg” (PHN).

As Peter Henlein, who was born between 1480 and 1485 in Nuremberg, had not yet become a master locksmith (watchmakers did not officially exist yet), the formal guild rules of the time forbid him to sign any work he did. Therefore, he apparently hid his signatures.

And this leads us to one of the most important points of the findings: the inner case had been fire-silvered. Underneath the layer of silver, the researchers found microscopic “PH” signatures, which could not be recognized with the naked eye. However, they almost form a background pattern on all components of the watch

The research examinations of the individual elements have led the researchers to believe this Pomander Watch was also most likely Henlein’s personal watch.

This video below (unfortunately only in German) of a news report by a local television station in Düsseldorf, Germany, shows Hermann Grieb inspecting the individual parts of the watch. He expresses his feelings that this watch is the real thing.

Grieb and other experts have even found a microscopic engraving of the initials PH on the back of the single hand. While some may argue that the engravings would be too small for someone to have achieved in the early 1500s, it is perhaps important to point out that master engraver Albrecht Dürer also lived in Nuremberg at the same time. He might have been able to show others some features of his own artisanal work that would make this possible. For the moment, this priceless artifact remains in a bank safety deposit box, but its future location is slightly unsure. It may go up for auction. A microscopic face engraved on the Pomander Watch (credit: www.peterhenlein.de)

While Grieb thinks that a price cannot be put on this timepiece, others estimate its current value between 30 and 50 million euros. Should it go to auction, it will certainly set new records. The movement of the Pomander Watch (credit: www.peterhenlein.de)

The intricately engraved case of the Pomander Watch (credit: www.peterhenlein.de)

It should be noted that there are still many who find the results inconclusive and continue to debate as to the creator of the Pomander Watch (Bisamapfeluhr).

*This article was edited on December 23, 2014 to better reflect the ongoing discussion.

Quick Facts The Pomander Watch by Peter Henlein, 1505
Case: copper, gold-plated on the outside, silver-plated on the inside, 45 mm in diameter, 38.5 grams in weight, three feet on the bottom
Movement: 36 mm in diameter, 54.1 grams in weight, iron, hour wheel with four teeth, upper plate skeletonized, chain and fusée, regulating arm with holes for 2 hog’s hairs, approx. 12-hour power reserve
Function: hour shown by one hand