Romain Gauthier celebrates the tenth anniversary of his boutique brand in 2015, and to kick off the party he introduces the HMS Ten at Baselworld. Its look is dominated by a configuration of circles and arcs that approximate the classic round watch. But don’t be fooled, the smooth compilation of off-center hours and minutes with a sectorial seconds arc tucked to one side is anything but ordinary fare: the classic-yet-different look housed in a graceful 41 mm case shields clever mechanics. These are only partially visible from the dial, but they are fully showcased through the sapphire crystal on the case back; the Vallée de Joux-style finger bridges immediately attract the eye.

The entire hand-wound caliber is manufactured in Romain Gauthier’s Le Sentier workshop with the exception of the mainspring, balance spring and jewels. And, naturally, the movement is finished to perfection. HMS Ten will be available in three editions of ten pieces in platinum, red gold, and white gold. As usual, Baselworld 2015 promises a firework of interesting horology from Ulysse Nardin. One of the delicacies that visitors to the fair can look forward to is the Hannibal Minute Repeater, the latest in the brand’s long line of exceptional, themed, jaquemart-outfitted minute repeaters. This one pays tribute to the great Carthaginian general Hannibal Barca, who strove to take Rome during the Second Punic War. He remains imprinted on history thanks to his favorite strategic weapon: the elephants with which he crossed the Alps.

Offered in a limited edition of just 30 pieces, the Hannibal Minute Repeater is housed in a 44 mm platinum case and topped off by a dial made of granite mined from the Alps. Its four exquisitely engraved jaquemart figures (Hannibal on his horse, Hannibal fighting, Hannibal’s elephant, and his army) move along to the beat of the cathedral minute repeater. A one-minute tourbillon is featured in the lower half of the dial. 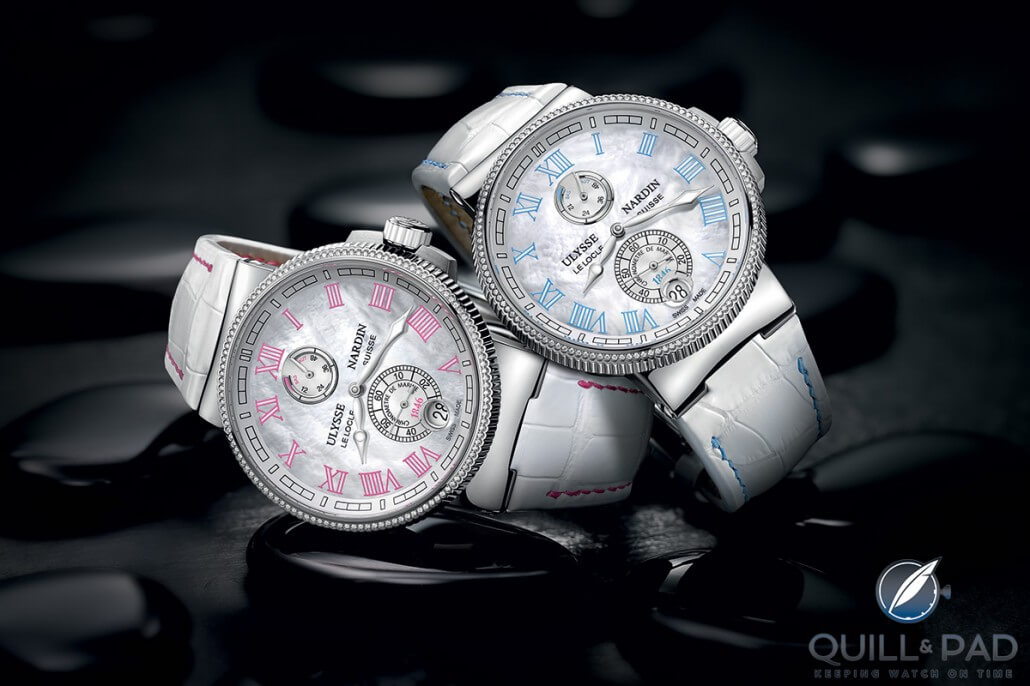 The brand’s in-house chronometer movement is now the powerhouse behind a new Marine Chronometer Manufacture model just for women. While the C.O.S.C.-certified movement with its patented DIAMonSIL escapement and silicon balance spring remains the same, it is now housed in a 43 mm stainless steel case embellished with a mother-of-pearl dial with either pink or blue hour numerals and matching stitching on the leather strap (which really changes the look of the watch) and 120 diamonds (1.3 ct) set on the bezel. In a nice touch characteristic of Ulysse Nardin’s timepieces, the date can be corrected both forward and backward. Dead beat seconds is a complication rarely seen in modern wristwatches (although, oddly, we feature two examples of it in this news post). It is visible from the outside because the second hand makes a small jump forward once per second rather than appearing to continue on its route around the dial smoothly. To emphasize its mastery of the technique in the Grande Seconde Deadbeat, Jaquet Droz has placed the second hand smack the center of the dial regulator-style. The result is hypnotic as the eye follows the revolution of the second hand powered by automatic Caliber 2695SMR making its little jumps around the dial. Housed in a 43 mm red gold case, this timepiece, which also boasts a silicon balance spring, is limited to just 88 pieces. In the seventeenth-century, one of the Miotti family of artisans working in the even-then famous Murano glassmaking industry accidentally dropped some copper filings into a vitreous batch of glass (or so the story goes). The result, now famous, was aventurine glass, so named because it was a lucky mistake (avventura). Jaquet Droz generally loves its aventurine, which is most popularly seen in the blue variety known as goldstone, but this is the first time that its artisans have utilized the variation called sunstone. The sparkly gold tones of this material generally found in jewelry now grace three astonishingly beautiful variations of Jaquet Droz staples: the Grande Seconde Cerclée, the Petite Heure Minute 35 mm, and the Lady 8. Blancpain debuts the large date complication in its Villeret line with the Villeret Big Date. It is powered by automatic Caliber 6950, boasting twin spring barrels and a silicon balance spring, and it also features an instantaneous date change at midnight. Housed in a 40 mm red gold case, this fine example of classic watchmaking is sure to remain a timeless beauty. Arnold & Son has managed to popularize dead beat seconds in its DSTB line. Standing for “Dial Side True Beat,” the DSTB model puts the true beat (otherwise known as dead beat seconds) mechanism from the TB88 model, as the name implies, on the dial side. Thus, Arnold & Son’s mechanical ingenuity not only forms the mechanical basis, but also the visual basis of this model. Part of the brand’s Instrument collection, it now arrives at Baselworld in a 43.5 mm stainless steel case limited to just 250 pieces.

For more on this model in red gold, please read Anchors Ahoy! The Arnold & Son Dial Side True Beat (DSTB). Graham once more delves into the history of its namesake, eighteenth-century English horological legend George Graham. The modern Swiss-based brand presents a refined timepiece limited to just 100 pieces in the Geo.Graham collection. The classically styled Geo.Graham Tourbillon distinguishes itself with a svelte pink gold 40 x 9.85 mm case, made possible by the micro rotor in automatic Caliber G1796. The white lacquered dial, blued hands, and time-honored one-minute tourbillon displayed in a cutaway at 6 o’clock enhance the classic look of this timepiece. Carl F. Bucherer will introduce a red gold version of last year’s Patravi ScubaTec diver’s watch at Baselworld 2015.  Its look is complemented by black and blue ceramic inlays on the unidirectional rotating bezel, perfectly harmonizing with the black dial. Outfitted with a helium valve, luminescent hands and markers, and a rubber strap with integrated clasp adjustment, the Patravi ScubaTec is powered by an automatic movement. The unique and – yes – striking look of this timepiece comes about thanks to the use of 3DTP, a proprietary method of sculpting carbon in multiple layers into the angular shape of a Linde Werdelin Oktopus case measuring 44 x 46 x 15 mm. Added to this is a titanium TIN crown and a black ceramic bezel. The “green” in the Oktopus Carbon Green name comes from the interchangeable rubber strap matching the striking green of the dial’s numerals. This watch, which retails for 14,000 Swiss francs, is powered by a modified Dubois Dépraz Caliber 14580 and limited to 88 pieces. The reinterpretation of Girard-Perregaux’s 1966 model now comes in two sizes (one for men, one for women) and a stamped guilloche dial, adding to its understated elegance. The men’s version comes in a classic 38 mm pink gold case and is powered by automatic GP Caliber GP03300-00030-OM5A with date window at 3 o’clock. The version meant for the more delicate wrist comes in a 30 mm pink gold case set with 60 brilliant-cut diamonds (0.55 ct). It is powered by automatic GP Caliber CP03200-0005. As it is now official that Spectre, the twenty-fourth James Bond film, will hit theaters in the fall of 2015, Omega presents a limited edition of the Seamaster Aqua Terra 150M inspired by the (fictional) coat of arms of the Bond family. The latter is visible as the embossed pattern on the blue dial as well as in the shape of a shield placed squarely on the yellow second hand. However, one of the most obvious symbols of the watch’s connection to the world’s most famous fabricated spy is the rotor visible through the sapphire crystal case back: it is in the shape of the famous 007 gun barrel logo. Co-axial, automatic Caliber 8507, which is impervious to magnetic fields of more than 15,000 Gauss, is housed within in a 41.5 mm stainless steel case. It is limited to 15,007 pieces and boasts a magnanimous guarantee of four years. The retail price is €5,750. Switching gears from releases ahead of Baselworld 2015, Jaeger-LeCoultre (who exhibited at the SIHH in January, see SIHH 2015 Photo Essay: Jaeger-LeCoultre) now releases a sequel to the Master Compression Extreme LAB, originally introduced in 2007. The LAB line was called to life as an experimental ideal of what a fully non-lubricated watch could be. The new Master Compressor Extreme LAB 2 contains a combination of cutting-edge materials and horological research in addition to a patented digital counter displaying the chronograph’s elapsed seconds, a radial 60-hour power-reserve indication, and a second time zone (GMT) indication. The Extreme LAB 2 is equipped with a function selector and independent hacking seconds.

It is powered by automatic Jaeger-LeCoultre Caliber 780, which is housed in a 46.8 x 16.5 mm case boasting 143 individual components, mainly crafted in a TiVan15 titanium alloy, and topped off by a scratch-resistant ceramic bezel (the crown, too, is crafted in ceramic). It comes in two versions: one in pure TiVan15 – a material proprietary to Jaeger-LeCoultre – and one in two-tone pink gold and TiVan15.