If you know Peter Speake-Marin, then you know why he is so popular with collectors. As a creator, he goes the extra mile to conceive something absolutely stunning and unique.

As a designer, his great desire is to please his client.

And as a human being, he likes to work with people he likes. Luckily for the world of watches, his friends happen to be some of the greatest artists in the watch industry.

All of these elements have aligned like proverbial lucky stars to create one of the most breathtaking timepieces I had the pleasure to see at Baselworld 2015. 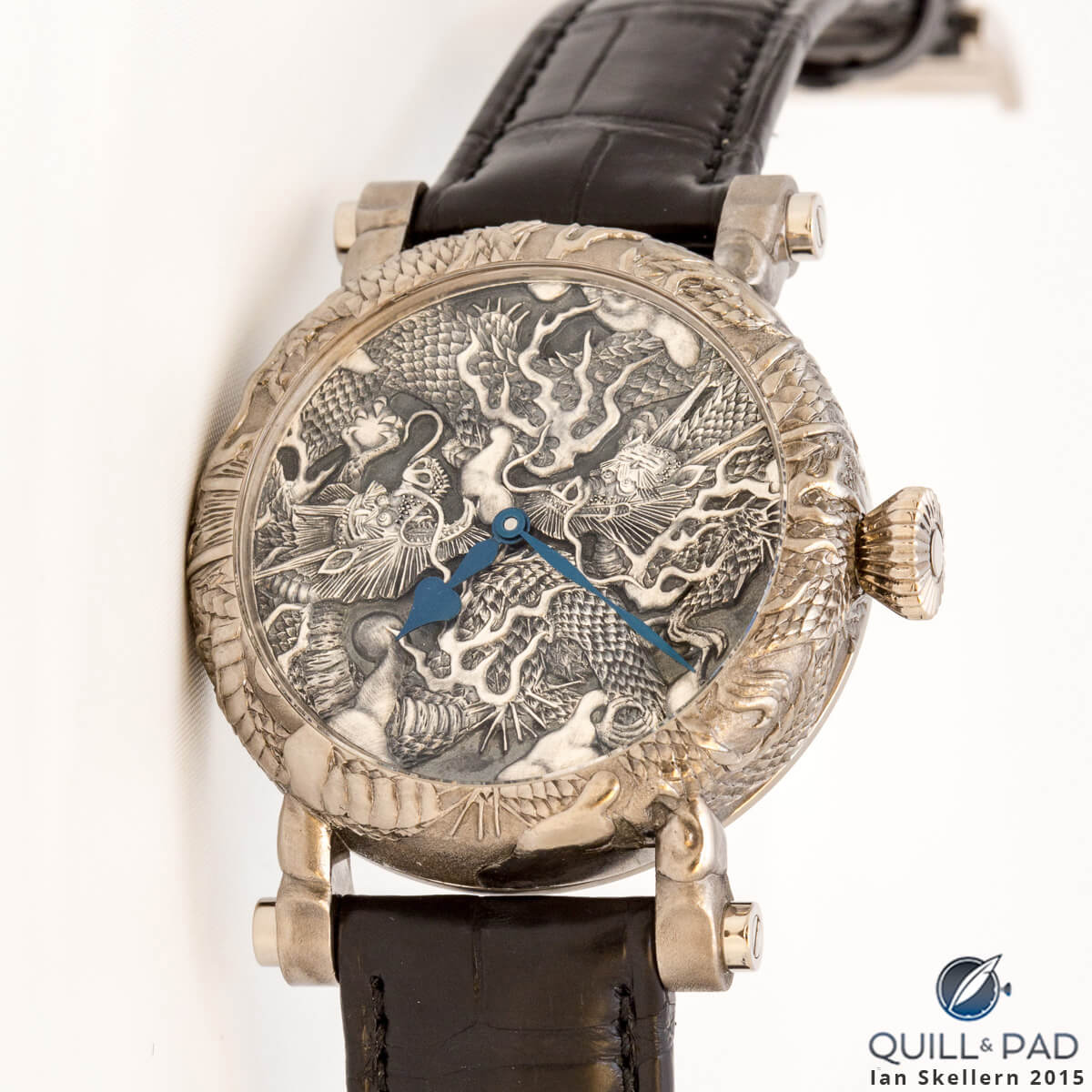 The Kennin-ji Temple Masters Project was commissioned by an experienced collector who is passionate about high-quality artisanal crafts because he believes that it is the people involved in an artisanal project such as this that lend the watch its soul.

The souls involved in this particular adventure read like a Who’s Who of horological craftsmanship: Kees Engelbarts (engraver of the dial, case, and bezel), Eddy Jaquet (engraver of the in-house caliber SM2), Christophe Seewer (leather embosser for the presentation case), and Peter Speake-Marin (watchmaker). The inspiration for this piece originates in an exotic locale: the historic Zen Buddhist Kennin-ji temple in Kyoto, Japan. It is considered to be the oldest Zen temple in Japan, established in 1202; its founding abbot is credited with introducing the Zen philosophy to Japan. A dramatic painting of two dragons on the ceiling of an additional structure by artist Koizumi Junsaku commemorates the temple’s 800th anniversary in 2002. It is this monumental painting that Speake-Marin has chosen to recreate on the Kennin-ji Temple Masters Project timepiece, naturally reduced to the size of a wristwatch and with the help of his talented friends. For most lovers of fine horology, it isn’t very hard to recognize the work of Kees Engelbarts, much of whose work has centered around mythological dragons over the course of his career. This timepiece showcases ornately engraved twin dragons spilling out from the dial over to the bezel and case band. The motif covers practically every visible part of the watch. As one might expect, the attention to detail on this piece is unparalleled. One interesting example is the bezel: the original stepped bezel of Speake-Marin’s Piccadilly case was redeveloped for this piece so as to have a rounder, less angular profile. This allows the dragons engraved in relief technique to flow seamlessly from the dial, over the bezel, and down the sides of the case band in one fluid motion.

“This was the most complex project that Kees has ever done,” Speake-Marin explained as he carefully lifted the precious timepiece from its leather cocoon to show us, beaming like a proud papa. 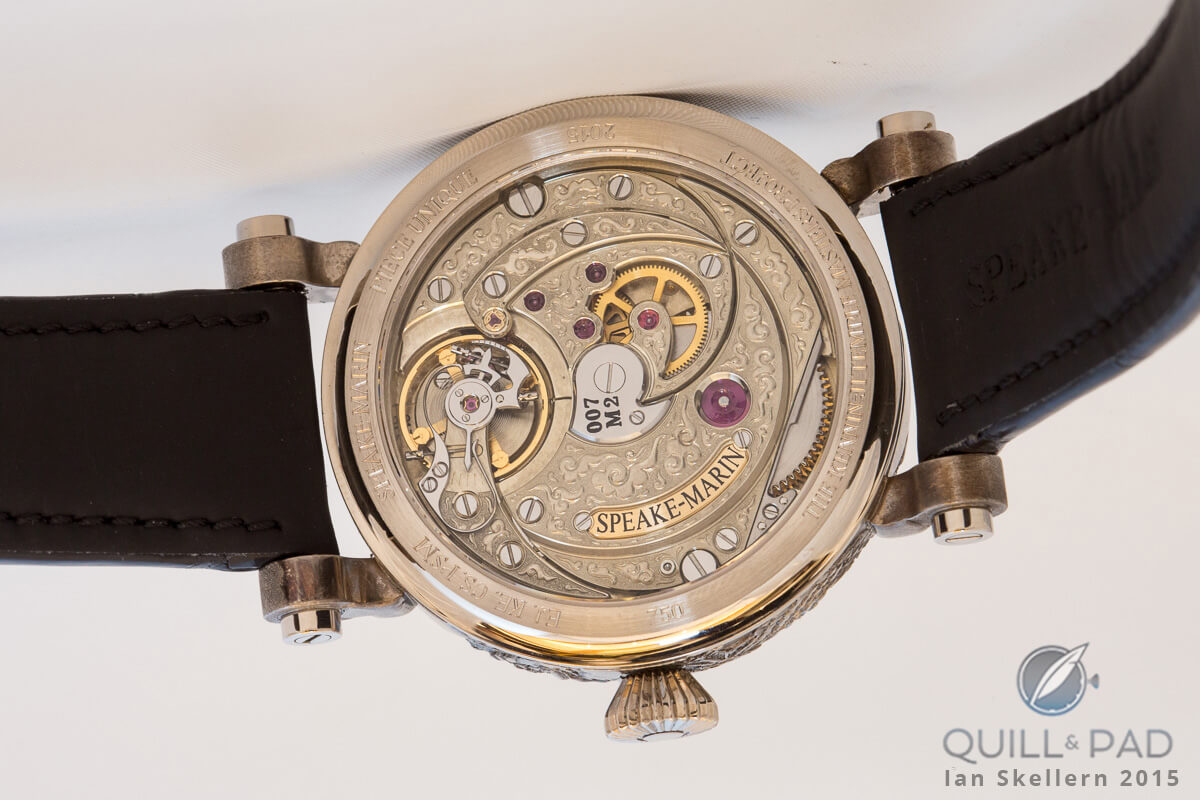 As previously noted, the engraving on the Kennin-ji Temple Masters Project isn’t restricted to the outside of the watch. The movement has been engraved by veteran artist Eddy Jaquet, who has also decorated exquisite, top-class calibers of Kari Voutilainen, Vacheron Constantin, and many more. When the timepiece is put to rest inside its wooden presentation box, the leather lining almost camouflages the watch with its embossing, which matches the dragon motif of the watch. This leather lining alone took 100 hours of painstaking work. 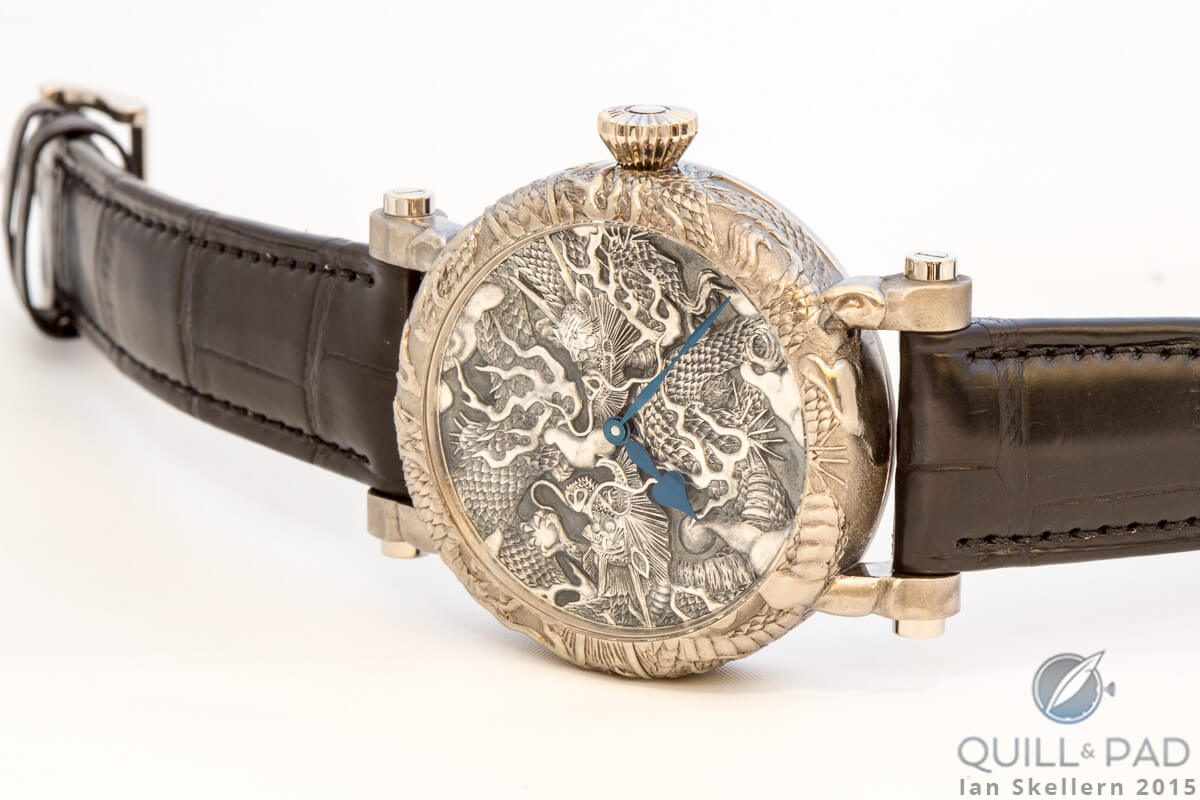 The timepiece’s legibility is guaranteed thanks to the blued spade hands that are Speake-Marin’s trademark. There are no hour markers on this dial, which is a true work of art in and of itself. Certain elements remain that allow a Speake-Marin connoisseur to recognize that this housing started out as a Piccadilly case, including the extended, angular lugs with the screw-in strap bar and the pleated crown. The entire project needed one full year to complete.