You often see watches signed “LeCoultre,” but very rarely simply signed “Jaeger.” The reason for the two different names used throughout history is easily explained. Edmond Jaeger of Paris and Jacques-David LeCoultre of Le Sentier, Switzerland merged their businesses in the early 1900s. They officially renamed the company Jaeger-LeCoultre in 1937.

Jacques-David LeCoultre was the grandson of Antoine LeCoultre, who laid the foundation for the company in 1833.

Coming across a timepiece signed only “Jaeger” is rare. To date, there are very few known watches with only this name on the dial. The timepiece pictured here is known as the Jaeger “4 ATM.” It has no official model name, but it does have the reference number: E.13001. The nickname in lieu of a real name comes from the inscription on the back denoting its water resistance “4 ATM” (ATM = atmospheres; 4 ATM is 40 meters/130 feet).

The production numbers of this piece are unknown, but Quill & Pad’s vintage virtuoso Boris Pjanic believes there could be less than 100 of them. This model was not produced at the Jaeger Le-Coultre factory, and there is very little official information regarding it.

But here is what we do know thanks to research by Boris and Pascal Ravessoud of the FHH with help from Jaeger-LeCoultre. Produced only from 1968 through 1971, the Jaeger 4 ATM boasts a diameter of 41 mm and is outfitted with a rotating, graduated bezel. The dial has luminous hands and dot markers as well as a tachymeter scale in either km/h or mph. Versions exist where there are no tritium dots on the dial.

The bezels, which seem to have been produced in aluminum with a black surface treatment, also exist in various forms on the known executions of the Jaeger 4 ATM. The particularity of the 4 ATM rotating, graduated bezel is that it shows the numbers in reverse order.

There appear to be five dial versions in existence. Version one has the “17 rubis” indication, the silver-and-black color combination, tritium dot markers, chronograph counters that slope, 12-hour counter with 2/4/6/8/10/12, a narrow font type, longer minute indexes, and the tachymeter scale in km/h. Version two is the same as version one but with “17 jewels” and the tachymeter scale in mph.

Version three is marked “17 rubis” and “Made in France.” It’s also missing the tritium dot markers. Its chronograph totalizers (subdials) are flatter and recessed into the dial. Its font type is overall somewhat larger, and its minute indexes are shorter than other models. The twelve-hour counter is divided into 3/6/9/12, and its tachymeter scale is shown in mph. 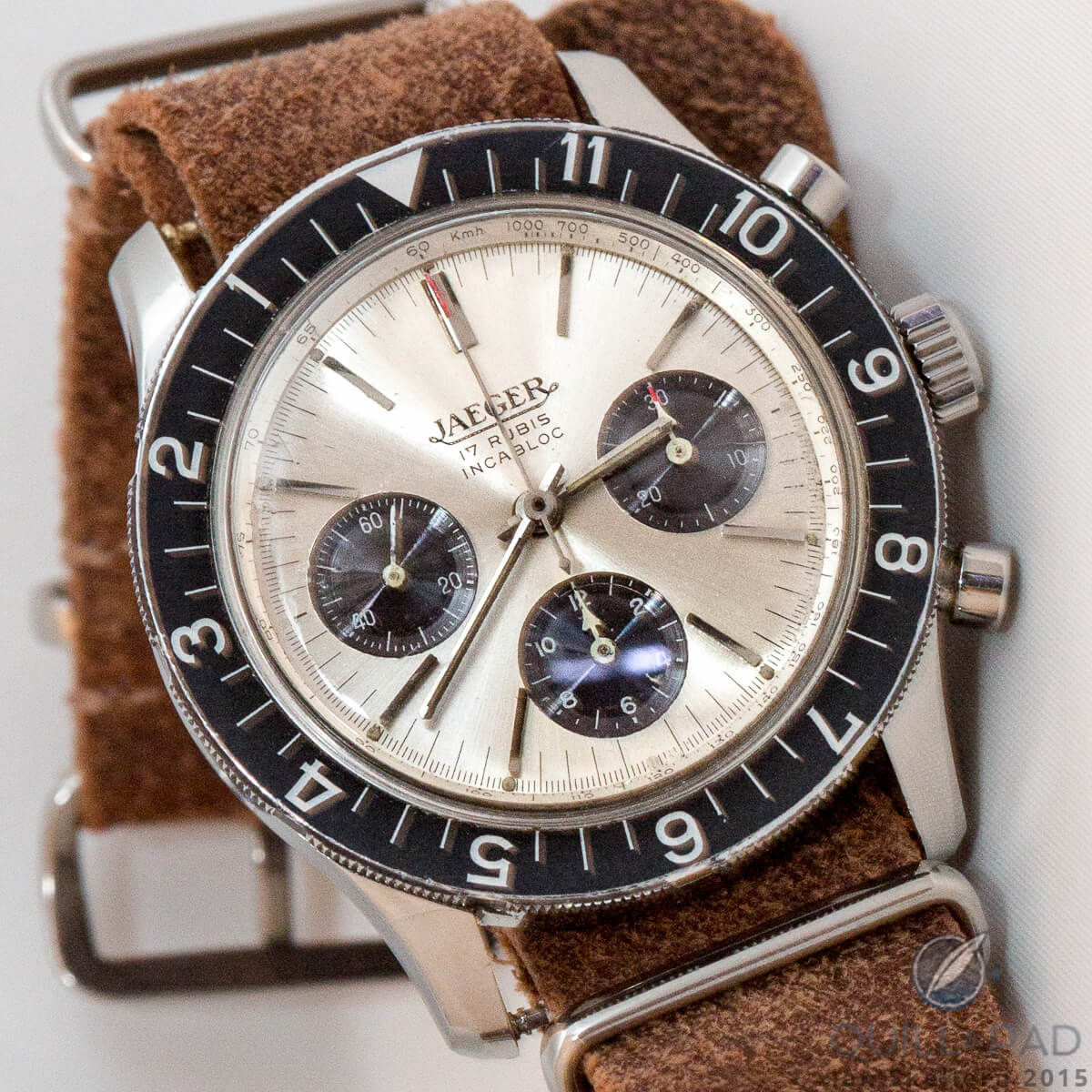 The fourth version says “17 jewels” on the silver dial and boasts tritium dot markers. It otherwise has the same configuration as version two.

The final version displays “17 rubis” on the silver dial and it has no tritium. The rest is the same as above.

All of the hands on every version are silver- or steel-colored and with cut with two large facets. Some have luminous inlay along the length of the hands.

All of the dial versions are marked “Jaeger.” So-called Panda dials are typical of the Rolex Daytona, the most famous of which is known as the Paul Newman Daytona. This features a white dial with black chronograph totalizers. If you look at it, a certain resemblance to a panda bear’s face will become obvious to you. Hence the name.

By extension, this term can be applied to any chronograph watch of the same period (and maybe even into the present) that features a white or silver dial with black counters. This watch was not produced at the Jaeger-LeCoultre factory and it is not powered by a LeCoultre movement.

The movement inside this wristwatch is a Valjoux 72. This is the same column wheel chronograph that can be found in hand-wound Rolex Daytona models (like References 6263 and 6265) and many, many others such as classic Breitlings.

A special thank you to Boris Pjanic and Pascal Ravessoud for all the research and information.