Being a world traveler is a pretty easy thing to be these days. All it takes is a passport, a bit of cash, and a sturdy backpack that can hold a week’s worth of clothing and supplies. The rest can be figured out on the fly thanks to modern technology and infrastructure. Thanks, industrial revolution, we owe you one.

But it hasn’t always been so. Before railroad tracks crisscrossed continents and flight paths littered the skies with contrails, setting out on a journey longer than a couple days required serious planning, ample skill, and more than a little courage. And that was just 200 years ago.

Before that, long journeys to distant lands meant a complete change in your life, as you would say goodbye to loved ones for months or years at a time, with the very real knowledge that you might die on the journey or never be able to return.

Many journeys would take so long that people simply knew they were leaving forever. I don’t think most people would necessarily want to save up vacation days for that itinerary.

Mural by John Henry Amshewitz of Vasco da Gama leaving Portugal. In the painting, Abraham ben Samuel Zacuto is shown presenting his astronomical tables to da Gama before his departure from Lisbon in 1497. The mural resides in the William Cullen Library at the University of the Witwatersrand (photo courtesy University of the Witwatersrand, Johannesburg)

So when Vasco da Gama set out in July of 1497 to chart an ocean path to India, everyone on board his four ships knew the dangers. And dangers there were: only two ships returned with a total of 55 crew members; two ships and an unknown number of crew were lost in the perilous journey.

If only they had gone with Priceline.com for booking the trip. William Shatner, where were you on that one?

The true bravery and courageous nature of the expedition is explanation enough, then, for Montblanc to have chosen to honor Vasco da Gama with its newest world time watch, the Tourbillon Cylindrique Geosphères Vasco da Gama.

It is an insanely awesome watch style-wise, and the movement mechanics prove to be equally interesting to the WIS in all of us.

To discuss the watch and its display is to dive headfirst into how Montblanc chose to make a true world time watch for both the northern and southern hemispheres in one watch and keep it visual.

It all starts with two sapphire crystal half spheres that are miniature painted to look like the northern and southern hemispheres side by side. Twenty-four lines of latitude and longitude indicating time zones are debossed on these tiny half globes. With this, the watch also subtly contains a world day/night indicator for both the northern and southern hemispheres.

But the time, man, the time?

To utilize those globes accurately, you do need to set the watch. All of the time indications (the central hour and minute hands, the home time at 6 o’clock, and the twin hemispheres) are set using just the one crown. The main hands are considered the wearer’s local time, and these are driven by the home time and the twenty-four hour discs.

Easy peasy, right? It really is, and this setup allows you to have, as Montblanc states, three time indications with home time, local time, and world time. But if we are honest, it technically has twenty-four since two time zones are covered by the home time and local time, and the other twenty-two can more or less accurately be read off using the hemispheres.

One might also try to argue there are then 48 time indications, but time zones aren’t different from the north to the south. Yes, it still is a double world time indicator, which is awesome. Though it’s only awesome if the rate is accurate and the timekeeping consistent. That gear train is regulated by the next fantabulous bit of hardware, a tourbillon featuring a cylindrical (or helical, if you prefer) hairspring. This type of hairspring expands and contracts around the balance axis much more evenly and consistently than a flat hairspring.

Not even a Breguet terminal curve can match the consistency of a cylindrical hairspring. That’s why, historically, marine chronometers were fitted with cylindrical mainsprings to ensure accuracy on the high seas; they saved lives by helping keep accurate time, which helped keep ships on course. It’s not all about the function

Plus, the hairspring looks cool, especially within in that large tourbillon. Not to mention the bridge for the tourbillon, which is a high point of all of Montblanc’s Villeret tourbillon-regulated collection pieces. It takes a week of work to just to hand-shape and polish into a smooth and flowing ribbon that holds the gold chaton and jewel for the tourbillon cage. The entire tourbillon located in the recessed dial plate commands attention, which is aided by the guilloche wave pattern cut into a plate at its base. But the bottom of the dial is still where the party is: the twin hemispheres sparkle like a pair of precious stones (which they sort of are, being manmade sapphire), definitely grabbing the eye.

When you recover from that long first gaze, you will notice the complexity of the home time, the hour hand shaped like a fleur-de-lys, and its location atop a very complex pattern. 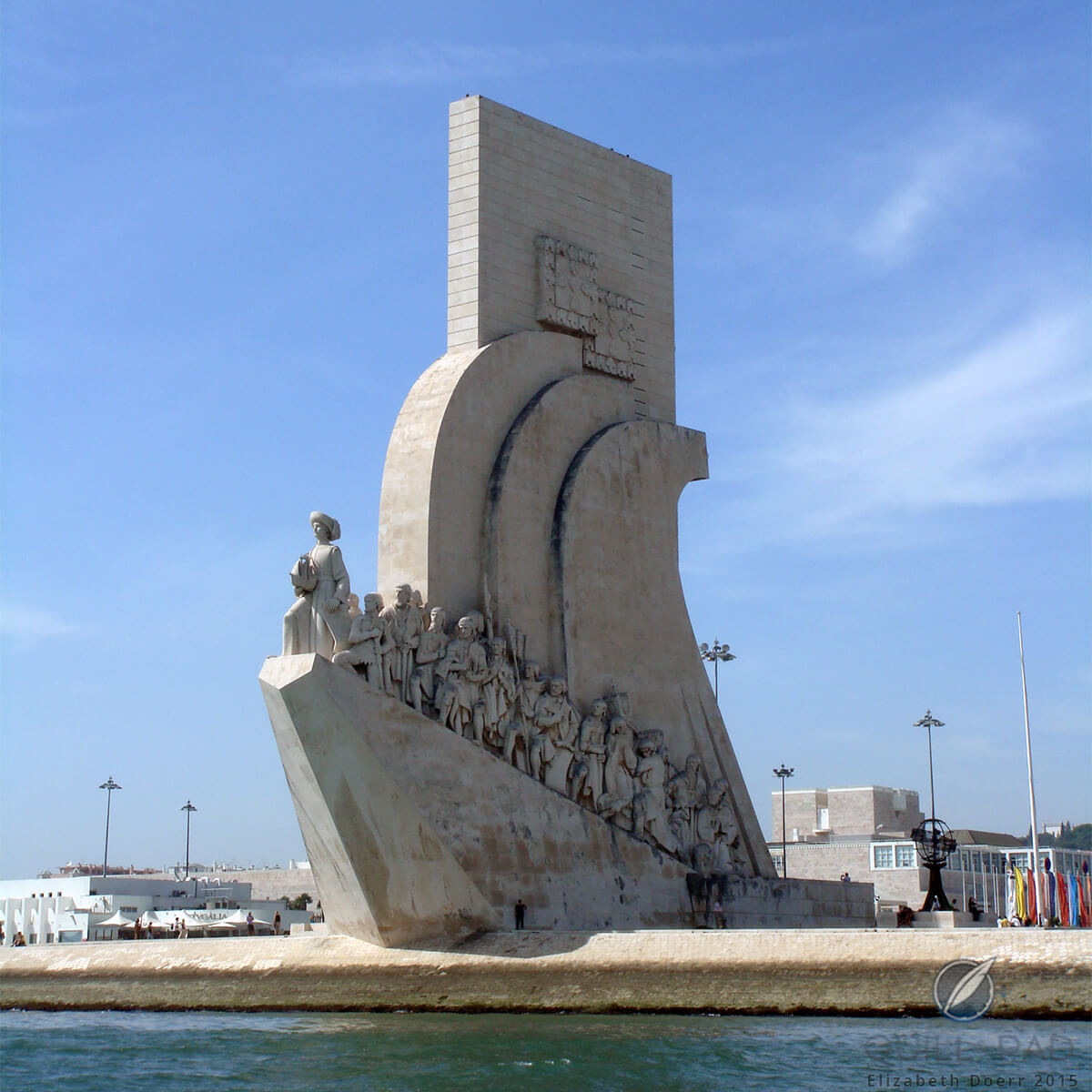 The compass rose pattern beneath the hour hand is inspired by another famous Portuguese creation, the Padrão dos Descobrimentos (Monument to the Discoveries), which is a large stone monument to the Portuguese age of discovery. The monument has a large open square before it, and the square is decorated with a large inlay of a compass rose that is 160 feet in diameter, which was gifted by South Africa. The compass rose on the home time is much simpler than the one in Portugal, but consisting of four separate three-dimensional pieces, it is still a rather complicated decoration. On the rear of the case things are kept pretty clean and relatively simple. Circular côtes de Genève, screw-mounted gold chatons, and immaculate hand-beveling and -polishing on various components round out the movement.

On the case back, 48 cities for the northern and southern hemispheres are engraved with their corresponding plus or minus time from GMT as a reference. But before leaving the rear we find, surprisingly, my absolute favorite component on this watch, something that most wouldn’t even pay attention to: the mainspring click.

What only needs to be a disc with a couple teeth cut into it, the click wheel has been given royal treatment on this piece. A long swooping devil’s tail has been fashioned as the part designed to catch and keep the ratchet wheel (and mainspring) from spinning freely until the mainspring is unwound. I find that many great watchmakers spend a fair amount of time in fashioning a signature click wheel, and in doing so will make it clear to everyone that they take every component seriously.

For that reason it is my favorite part on this piece, because after having made 280 other components, 90 of which make up the tourbillon subassembly, ample time was still spent to make something mundane as interesting as it could be.

Two thumbs up from this nerd writer on that account! So it looks great, the movement is incredible, and it champions a true historical milestone. What more could a watch lover want? Probably one for his or her collection, for which he or she will have to get in a very short line for as there will only be 18 examples made with a retail price set at 250,000 Euros. Hmm, that probably eliminates me.

I guess I’ll just have to keep drooling over it from a distance.

In the meantime, let’s break it down!