Why Is The Panther Cartier’s Pet Animal? Thank Jeanne Toussaint

Anyone who knows anything at all about French jewelry and watch brand Cartier has heard of one of its most famous collections, the Panthère de Cartier.

Cartier is well-known for its Art Deco pieces and love of exploring the aesthetics of wild beasts, however that still doesn’t fully explain why the century-old Panthère collection became as iconic as it is today.

Impressed with his work, Louis asked French painter George Barbier to create a watercolor painting in 1914. Louis planned to use it for an invitation to a Parisian jewelry exhibition. He ended up liking the painting so much that from then on, it has been in continuous use by Cartier as brand advertising. The painting, Dame à la panthère, depicts an elegantly dressed woman with a panther at her feet. This moment in Cartier history marks the first use of an animal at the company, and it is this painting that essentially kicked off the panther theme. The reason for placing a panther at the woman’s feet is shrouded in a bit of mystery, but Cartier expert Geo Cramer has a possible answer. “At the beginning of twentieth century, big cats were en vogue for expressing femininity – in fact, the beast was seen as the ultimate expression of femininity,” he explains.

Later that same year, the first piece of panther jewelry by Cartier came into existence: a watch designed to look like the spotted coat of one of the magnificent felines. More ladies’ watches utilizing the panther theme were soon to follow. Cartier Panther Art Deco platinum wristwatch from 1914 with panther spots in onyx and rose-cut diamonds; it boasts a diameter of 24.6 mm

The first Panther was a watch

The signature mottled motif of the Montre Panthère (Panther Watch) was achieved by speckling black onyx among pavé-set diamonds to represent the pattern of a panther’s coat. One year later, a brooch-type watch was created using the same pattern. It ended up being sold to Pierre Cartier, who was at the time director of Cartier New York.

The panther was fully depicted for the very first time on a vanity case owned by Jeanne Toussaint, a woman who has been called called the Coco Chanel of jewelry and who served as style inspiration for some of Louis Cartier’s designs. In fact, Cramer thinks Toussaint may also have been the co-inspiration for the panther appearing in Barbier’s painting. “It is possible that Jeanne Toussaint was the first woman to wear a coat made of panther fur in Paris,” he hypothesizes. A working relationship between Jeanne Toussaint (1887-1976) and Louis Cartier began when she was 31. Cartier was awed by her beauty, carefree spirit, and aura of grandeur. Toussaint, already familiar with decorative arts, was designing popular handbags at the time. Louis admired her skill and taste and enticed her to join Cartier.

Toussaint also played a large part in making the Panthère de Cartier collection the icon it was to became. By all accounts, she more or less summed up its essence – which earned her the nickname “La Panthère” – thanks to her personality and feminine style that Louis Cartier found so intriguing. He hired her as head of Cartier’s accessories department the same year he met her. Cartier Panther brooch from 1963 in platinum, onyx, diamonds, and emerald (eyes); the head and joints are articulated

Toussaint quickly grew to be respected and admired within the company, becoming known for her exquisite style, which included mixing patterns, but making it work in a very classy way.

This marvelous eccentricity was not just seen in her clothing; by Cartier’s accounts her apartment was very similar: modern-looking, but with careful use of antique and rare furniture. This panther from 1949 in platinum and white gold with two pear-cut yellow diamonds for eyes boasts a 152.35-ct sapphire cabochon; it was the second three-dimensional panther made for the Duchess of Windsor

Artistically speaking, Toussaint was very knowledgeable and had an excellent eye, allowing her to combine the right items in order to achieve just the right look she was going for. She also had a passion for what she was doing and was inspired by other cultures. Toussaint clothes and apartment were her way of expressing her personality, and it worked well for her.

One culture that largely influenced Toussaint was India. She loved to incorporate Indian fashions, which were not en vogue in Europe at the time, into her ideas – for example by utilizing yellow gold, clusters of gemstones, flower motifs, and brooches, all of which were very colorful. The use of semi-precious stones such as coral also contributed to this “foreign” effect. Sketch for a Cartier Panther perfume bottle faceted like a diamond

At Cartier, Toussaint came up with many brilliant designs, such as perfume in a bottle faceted like a diamond and – an especially memorable design of hers – a brooch representing a colorful bird imprisoned in a cage. Four years later, she created another one of these, this time of a singing bird in an open cage. It was called Oiseau libéré (“Liberated Bird”).

In 1927, a designer named Peter Lemarchand joined Cartier’s team. Very skilled, he observed panthers at the zoo until he, working together with Toussaint, was able to do them justice. 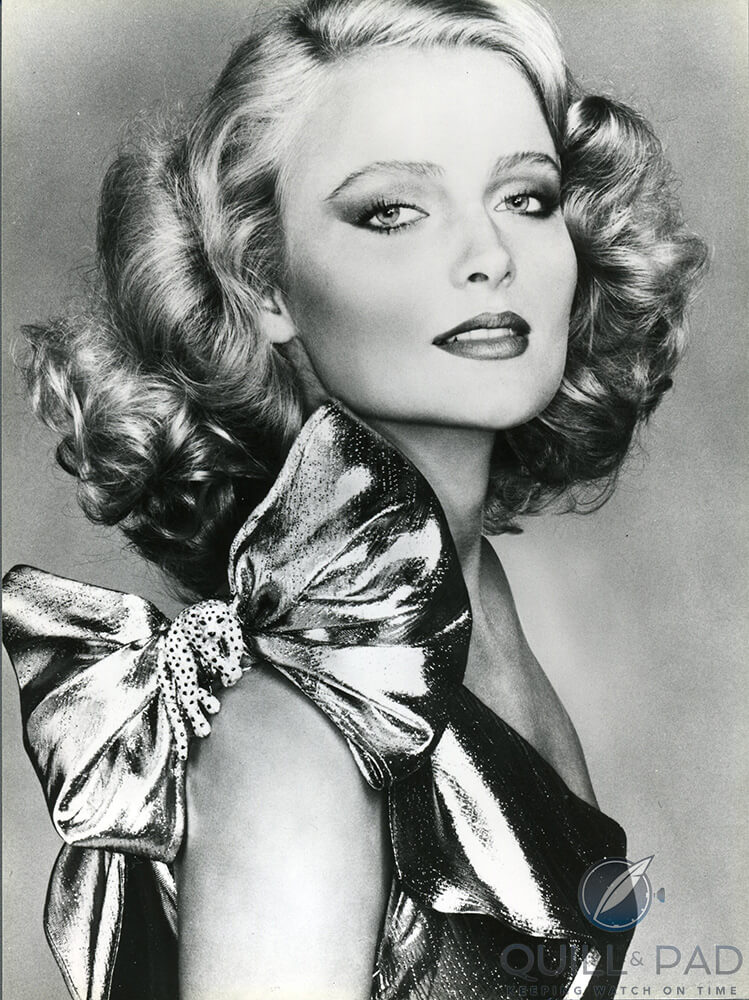 Lemarchand played a large part in making the panther the legend for Cartier that it is today. Around this time, the first brooches fully representing the animals (again made of diamonds and onyx, but now depicted on the full creature) began appearing.

In 1933, Jeanne Toussaint was appointed director of fine jewelry at Cartier.

Throughout the years, many celebrities and high society personalities, including nobility, became admirers of the ever-growing Panthère de Cartier collection. This listing has prominently included María Félix (1914-2002), a Mexican actress nicknamed The Mexican Panther. In 2005, Cartier actually dedicated a watch to Félix dubbed La Doña, another one of her nicknames. Mexican actress María Félix in 1967 wearing an articulated Panthère de Cartier brooch and a double-headed panther bracelet in platinum, onyx, and diamonds with emeralds for eyes

American heiress Barbara Hutton may have preferred the yellow diamond and onyx tiger designs, but it didn’t stop her from purchasing the panther designs, too.

Toussaint managed to win over many important and influential clients thanks to her unique fashion insights.

One of the most significant fans of Cartier was the Duchess of Windsor, otherwise known by her “common” name Wallis Simpson. In 1948, her third husband, Prince Edward, Duke of Windsor, asked Cartier to create a three-dimensional panther brooch for his wife. The Duchess of Windsor (Wallis Simpson) in 1949 at Villa Trianon in Versailles; note the panther brooch boasting the 152-carat sapphire cabochon pinned to the belt of her dress

The brooch consisted of a yellow gold panther speckled with black enamel stretching out on a 90-carat cabochon-cut emerald. At the time, the Duchess of Windsor was thought of as being one of the most elegant women in fashion in the world, and therefore she helped along the popularity of the panther immensely.

This brooch also marked a milestone in the history of the Panthère de Cartier: it was the first time the feline was represented in three dimensions, an important step for the brand’s famous line of jewelry.

One year later, in 1949, the Windsors bought another three-dimensional panther brooch made of diamonds and onyx and mounted in platinum, this time resting on a very special 152-carat sapphire cabochon. A big fan, the Duchess of Windsor acquired many more pieces from the Panther collection over the following years. Daisy Fellowes, socialite, heiress, and Paris editor of American fashion magazine Harper’s Bazaar, was likewise a panther fan. She bought a diamond-and-sapphire brooch representing the feline hanging in the position of the sheep in the classic story of the Golden Fleece. Her husband, the Aga Khan, immediately acquired several more items from the Panthère de Cartier collection for her, including an articulated panther brooch, a bracelet with ends shaped like panther heads, and a similarly designed fluted gold bracelet, the heads of which could be worn as earrings. The bracelet could be used as the handle for an “metamorphosis” evening bag in, another breakthrough concept for Cartier.

Jeanne Toussaint died in 1978, but the beautiful beast she brought into Cartier’s collection lives on today and is constantly being reinvented. High jewelry Cartier Panther watch on the wrist at SIHH 2015

A holder of the Grand Croix of the Legion of Honor, Toussaint has had a major influence on fashion. Pierre Claudel, the husband of Marion Cartier (Pierre Cartier’s daughter) and the son of writer Paul Claudel, described her as having “guided jewelry to modernity without ever sacrificing good taste to pure commercial interests.” That’s quite a difficult thing to pull off.

In 1983, Cartier launched another Panther watch, which was very similar to the previously released Santos de Cartier, but differentiated by flat gold links that increased flexibility, making it even more realistically panther-like. This was very popular and the watch is recognized as a success even today. Cartier has continued to launch more panther designs throughout the years and in 2009, the brand incorporated the majestic snow panther into its jewelry.

In 2014, Cartier celebrated the 100-year anniversary of Panthère de Cartier, in honor of which a 56-piece set of jewelry was launched and a grand exhibition of “Cartier style” went on show at Paris’ Grand Palais.

Though it is nearly impossible to express the Cartier Panther’s allure in mere words, one glance at Jeanne Toussaint is perhaps all you would need. She boasted many of the same features as Cartier’s trademark feline does, but perhaps the most intriguing aspect of both of these characters is their uncanny abilities to combine a mysteriously compelling and raw sense of danger with a pure, fascinating, and refined aura of feminine elegance. This is something that Louis Cartier evidently recognized when he decided to offer Toussaint a position at the company his grandfather founded. And these very traits are what I believe make up the Panthère de Cartier’s charm and seductiveness. Wearing a piece of the famous panther jewelry allows you to feel wild and untamed while still retaining a high level of class and luxurious sophistication thanks to the beast’s diamond fur, black onyx spots, and signature emerald eyes – as well as its poise and, later, its flowing movement.

In these ways the panther embodies many of the same traits that Cartier the brand represents: impressive, luxurious, enticing. Furthermore, the panther is a symbol of femininity, a fierce, independent type of femininity that was new to the world when the Panthère de Cartier was created. Beginning with a wristwatch of all things – a fashion item for forward-thinking females at that time – and soon after becoming a symbol of strong, confident and, most of all, free and wild women (as proven by the many famous followers of the collection), largely, of course, thanks to the influence of Jeanne Toussaint, “la panthère.” Toussaint had always been her own person with a unique personality and style while still maintaining her feminine touch. These are perhaps traits that every woman wearing panther jewelry strove for, as well as something that attracted people to Toussaint herself. This memorable essence is what Cartier has successfully transferred into the Panthère line of jewelry, a remarkable icon of femininity, luxury, and – now – longevity.