You are here: Home1 / General2 / Highlights3 / Christ The Redeemer On A Watch: Logical One Secret Kakau Höfke By Romain ...

Christ The Redeemer On A Watch: Logical One Secret Kakau Höfke By Romain Gauthier

Art comes in as many forms as there are artists, however there is not much art that that packs as much into such an aesthetically pleasing parcel as Romain Gauthier’s Logical One Secret Kakau Höfke. And that’s not just my opinion as it has recently been pre-selected as one of the top six watches in the Artistic Craft category of the 2015 Grand Prix d’Horlogerie de Genève.

The “Kakau Höfke” watch uses one of the world’s finest timepieces as a “canvas” for the artwork of two renowned artists, Kakau Höfke and Olivier Vaucher, who work in very different fields and even on different continents. The incredible stylistic and technical creativity in the award-winning Logical One should be well known, especially after it was awarded first prize in the Complicated Watch category at the prestigious 2013 Grand Prix d’Horlogerie de Genève. However, the concept behind the Logical One Secret variation differs slightly: it is meant to represent a blank canvas for artwork limited only by the imagination. To create Logical One Secret, Gauthier has basically taken the open-dialed constant force watch that is Logical One and closed it by applying a hinged cover. This cover, boasting an opening so that the time is always visible, is opened by a discreet pusher set into the case band at 4 o’clock, allowing appreciation of the top of the movement. And what a fantastic movement it is.

One thing to note about the sapphire crystal of Logical One Secret is that the top is slightly curved rather than flat. This means that the cover is also slightly curved so that it faithfully follows the lines of the crystal. This will become important as we learn more about the implementation of the art. Before looking at the artwork, it’s worth recapping what makes Logical One so special. Constant force is the holy grail of precision timekeeping because, in contrast to a liter of petrol (which contains the same energy whether the fuel tank is full or nearly empty), there is a large difference in the power output of the mainspring between fully wound and wound down.

Precision in a watch depends on having perfectly regular (isochronal) output from the balance, and that is difficult when the power input varies constantly. With Logical One, Gauthier reinvented the chain and fusee, which is an old mechanism invented to provide constant force. Gauthier improved it by replacing the fusee with a snail cam and developing a much more robust chain with low-friction sapphire links. The partially sapphire crystal mainspring barrel for lower friction (more constant force) visible at bottom left through the display back of the Romain Gauthier Logical One Secret Kakau Höfke; the power reserve indicator is at the lower right

Other innovations on Logical One include sapphire crystal components in the mainspring barrel to further reduce friction and improve constant force; push winding instead of a crown for improved force transmission; and Gauthier’s own escapement anchor in the form of a triangle for improved rigidity.

Kakau Höfke is a Brazilian artist from Rio de Janeiro known for incorporating the stunning landscapes and rich visual tapestry of her hometown and its surroundings into her art. While New Yorkers may have seen Höfke’s Brazilian-themed shopping bags for Macy’s department store, watch aficionados will have (unknowingly) seen her work every time they look at the Romain Gauthier logo, which she also designed. “My artistic inspiration is the love I have for my hometown,” she says. “My work is based on the mountains and the promenades of Ipanema and Copacabana, which are icons of Rio. The best-known mountain is Corcovado, which you can see from virtually anywhere in the city. It transcends religion – it is the symbol of the city. The promenades too have become known worldwide as a symbol of Rio.”

Höfke was born in 1967 in Rio de Janeiro, Brazil. She moved to Europe when she was 16, first finishing high school then studying for four years in Paris at the Parsons School of Design. On graduating, Höfke taught silk painting in Morocco and did design work in Portugal and France. In 1992, she returned to Rio where she worked for ten years with design and advertising agencies. However, Höfke started to feel that her creativity was being restricted and she and returned to painting full-time. Over the years Höfke developed an idiosyncratic pop art approach, fusing fine arts with computer graphics to create her colorful style celebrating Rio de Janeiro.

Höfke is a longtime friend of the Gauthiers, who regularly spend their holidays in Brazil. So the artist was a natural choice to create a special unique piece Logical One Secret.

“Undeniably, Rio de Janeiro has a special place in my heart,” Gauthier explains. “The diversity and exuberance of its people – the Cariocas – coupled with the beautiful, dramatic cityscape never ceases to fascinate me. There is no other place like it in the world.” The statue of Christ the Redeemer overlooking Rio de Janeiro; this enduring icon is the inspiration for the artwork on the Roman Gauthier Logical One Secret Kakau Höfke

Christ the Redeemer on a watch!

No, “Christ the Redeemer on a watch” isn’t a new horological expletive, but rather an accurate description of the Logical One Secret Kakau Höfke.

Christ the Redeemer is a 30-meter (98-foot) statue towering above Rio de Janeiro on the Corcovado mountain with its arms spread welcomingly wide. It has become an iconic symbol of both Rio and Brazil.

For Höfke, Christ the Redeemer was the perfect subject for this Logical One Secret.

“I was thrilled when Romain proposed to feature my artwork on one of his timepieces. It was almost surreal. I know how hard he has worked to create haute horlogerie of the very highest level, and so to now play a part in his adventure was a real honor.” Höfke usually works on a larger scale than wristwatches, so she painted the motif using acrylic on canvas, and this was used as a template for scaling down to wrist size. The painting depicts Christ the Redeemer on Corcovado mountain in pale blue on the lower half of the canvas, over a pattern inspired by the promenade (calçada) bordering Ipanema beach.

Höfke’s original painting will also go to the lucky buyer of the timepiece as it accompanies the Logical One Secret Kakau Höfke as a package deal. Gauthier could have chosen any of a number of miniature painting and enameling techniques to scale down the painting; however, he decided on one of the most difficult and time-consuming to realize: micro-marquetry.

Micro-marquetry is a technique derived from stone marquetry, and Olivier Vaucher and his team of artisans in Geneva are masters of the art.

For Logical One Secret Kakau Höfke, Vaucher and his team created and hand-applied 352 mirror-polished miniature jade and agate tiles, each only one or two millimeters long and only 0.5 millimeters thick.

It took more than three months for Vaucher and his team to complete the watch-sized cover and the subdials for the hours/minutes and seconds.

To appreciate why this process is so demanding and time consuming, it’s worth going into in a bit more detail. Close up of the micro-marquetry on the Romain Gauthier Logical One Secret Kakau Höfke: the miniature stone work seamlessly flows from the cover down to the time subdials

Firstly, the whole cover – including underneath the blue Corcovado section – is covered in miniscule light and dark tiles cut from the same lavender jade stone to form the Ipanema promenade pattern.

Then tiny blue agate tiles, so thin as to be translucent, cover the underlying pattern to create the ethereal azure form of Christ the Redeemer on top of Corcovado mountain. 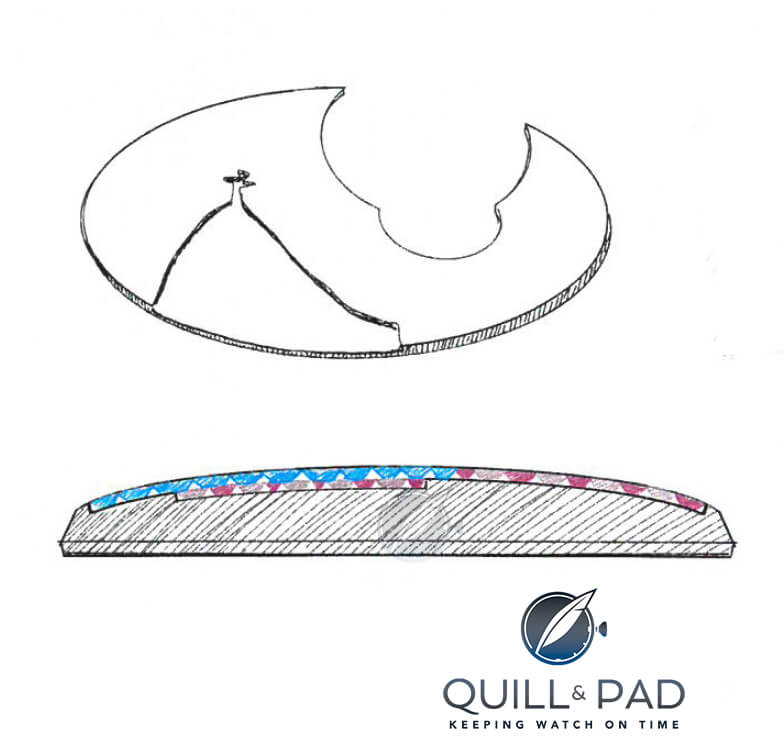 Now that may not seem too difficult to the armchair artist, but closer inspection reveals that the top surface of the tiles is smooth, meaning that the blue layer is at the same height as the rest. This was achieved by engraving the region more deeply that receives the second layer of blue tiles so that the double layer appears no thicker. The difference between marquetry and mosaic is miniscule. To sum it up in a word, this difference is grout. Mosaic works usually have gaps between the tiles that are filled with grout, while marquetry tiles are flush with each other and display no gaps.

Imagine that for a moment: 352 irregularly shaped tiles meticulously cut and applied so that there are no visible gaps anywhere. Now remember that the cover on the Logical One is curved so that it closely follows the lines of the sapphire crystal underneath. If you apply straight-cut tiles to a convexly curved surface, gaps appear between each tile.

So for Logical One Secret Kakau Höfke, Vaucher had to cut the edges of each and every miniature tile at a precise 70-degree angle so that when two tiles abut on the curved cover there are no visible gaps.