I see the Ferrari stopped in the other lane as I pull up to the red light. This is the moment I’ve been waiting for, and the poor driver in the 458 doesn’t even know what’s coming.

I roll down my window to get a better look and to catch his attention. When he turns, I nod just perceptibly and rev my motor ever so lightly to see if he’s up for a shot.

The driver looks at me puzzled. He laughs and shakes his head before giving me the nod back and revving his powerful 562 hp V8 engine, attempting to embarrass me before it even begins. I turn my head forward before laughing to myself, knowing that’s the last smile that will grace his face today. The reason he’s laughing is because my 1979 Volvo 240 wagon looks a little worse for wear; I even have some duct tape holding the corner of my bumper. Oh well, in 30 seconds he’ll wish he hadn’t laughed.

The moment the light flips green, I floor it. The 935 hp 2JZ-GTE motor I swapped in for the stock inline four roars to life. It only takes about one second for the driver of the Ferrari to know he’s done for. This exact moment was the reason I spent all those long nights in the garage. I have created the ultimate sleeper.

This is many a young car guy’s fantasy, probably passed down from father to son telling stories of getting schooled by sleepers back in the day or by being the exalted guy with the sleeper.

Strange as it may seem, there is an entire culture of the sleeper, not just in cars, but in many aspects of life. People who want to spend lots of time, money, and energy to create something that looks like nothing special to the casual observer or even the discerning fan.

Only upon close inspection, or by seeing it in action, does it become clear that the dark horse sleeper is really an impostor of sorts. A wolf lurks where the surmised sheep should be.

I have made this comparison to watches before, usually in passing, but never has one duped me as much or so utterly surprised me as the one I want to talk about today. I have dubbed this watch “the ultimate sleeper watch,” a name you may agree with by the time I’m done showing it to you.

Get ready for the Leroy Chronomètre à Tourbillon. 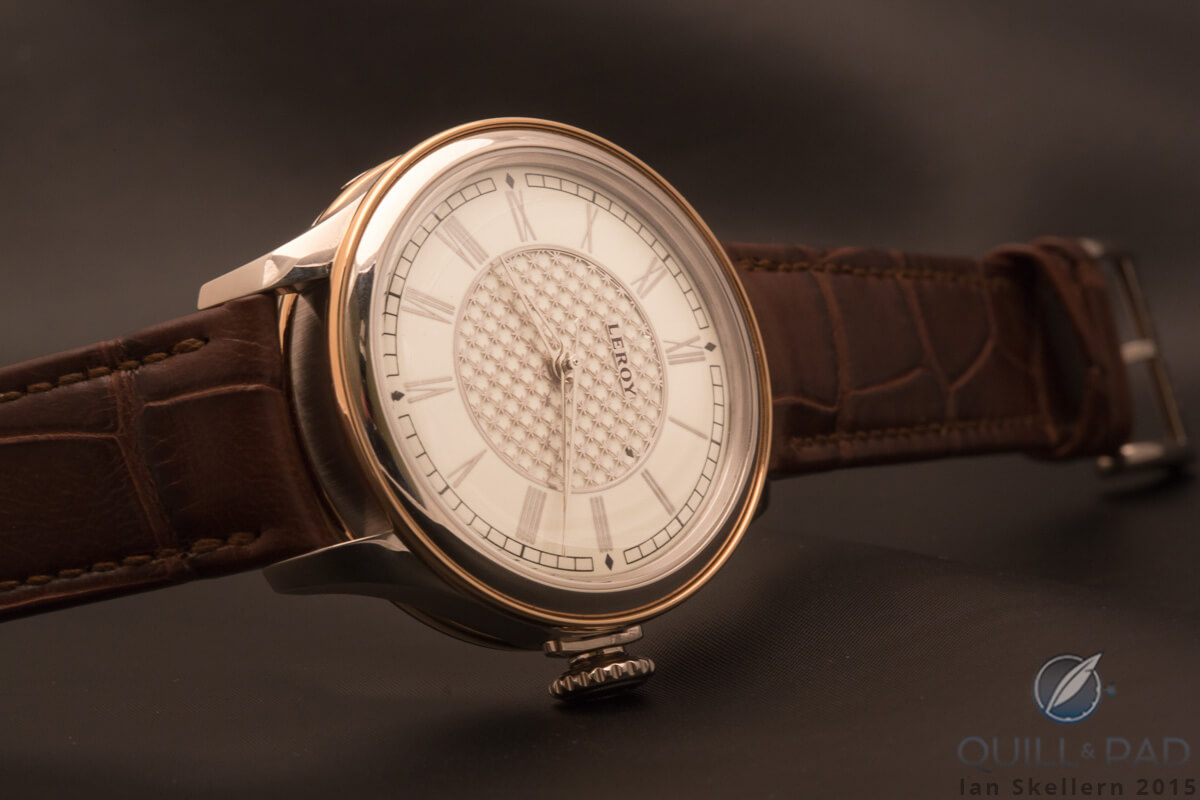 Now, I know you are thinking, “That seems like a nice enough watch.” And at first glance it is. If I saw this watch out in the wild, on the wrist of a random passerby, I might think the same thing. It looks nice, clean, and straightforward. It is not imposing on the wrist or crying out for attention. It is simply staying put, on the wrist, being a watch.

Really, what more can a simple man ask for?

Not much, it turns out, from a majority of similarly viewed timepieces. But this watch is different.

This watch packs more horological splendor just in the winding system than many do in the complete watch.

And the dial is much, much more interesting upon a second glance, which might hint at what’s underneath. Let’s dissect it, shall we? It starts benignly enough with a white dial, Roman numerals, and even a decorative pattern in the center. A nice railroad chapter ring encircles the dial, while lozenge-shaped markers are placed at each quarter hour.

But after a moment you notice the depth of the dial. That white color is created by grand feu enamel, and the chapter ring and numerals are created using the champlevé enamel technique, where the shapes are carved out of the base metal and then filled with enamel.

Already at this point, the dial is ten times more complicated to make than pad printing on a lacquered disc. After realizing your enamel-ous mistake, you start to see even more depth where it wasn’t obvious before. That nice decorative pattern in the center of the dial isn’t stamped, nor does it comprise the much more difficult cloisonné enamel.

No, that pattern is in fact an extremely thin sheet of 18-karat gold, delicately pierced and suspended over an enamel disc underneath. That disc underneath is the real confirmation that we are dealing with something meant exclusively for those in the know. Those elements, in fact, are akin to the Ferrari driver just noticing the roll cage inside my Volvo wagon.

Underneath the gold screen is a disc bearing the power reserve indicator. Nothing more than a small lozenge pointer that rotates 300 degrees from 11 down to 1, displaying the full range of the 75-hour power reserve.

And you wouldn’t have seen that unless you really got close enough to appreciate the enamel anyway, so this “secret” is for those in the know.

Oh boy, to be in the know

If you have gotten close enough to gaze at the beautiful enamel and understand the secrets hidden within the dial, then there is a good chance you will see and understand the real goods – those that make you wonder what is going to be inside the case.

Flipping over the Chronomètre à Tourbillon you find an unassuming hunter case back, but getting it open, again, precludes a secret: a hidden button underneath the crown. Pressing that button is analogous to flooring it at the green light; the result throws you back and rocks your world. What did I tell ya? It rocked my world too. Just look at the horological wonderland hidden beneath that rather normal-looking (though exquisite) dial; it’s just marvelous. The movement is packed to the brim with mechanical goodness and technical fantabulousness – which all begins with the winding system.

Two wolf’s tooth gears mesh to take the main force of the manual winding. These teeth were historically used to benefit winding systems because of their inherent strength. Wider at the base of the tooth than standard gear teeth they can handle more force before breaking, while the wider, open meshing of the gears reduces the chances of a particle getting caught and jamming the system.

These gears connect to a pinion that meshes with the fusée barrel. Oh, if you hadn’t noticed yet, this beautiful movement has a fusée and chain for smoother torque delivery.

Why? Because they could make a fusée and chain; you would too if you could. The satin-finished fusée barrel meets up with a polished chain threading its way to the mainspring barrel.

But before we get there, though, we should look at a couple of other things first. For starters, the level of historical detail that Leroy has put into this watch is fantastical. Atop the fusée barrel is the Geneva stop-works mechanism comprising a single toothed wheel and a Geneva gear (Maltese cross). This keeps the fusée from overwinding and breaking by limiting the number of rotations the barrel can complete.

And holding that single toothed wheel is a tiny little brass pin: no screws, no press fit, nothing so pedestrian. No, Leroy’s watchmakers utilize a very old technique that creates a post with a hole through it, mounts the wheel, and then pins it in place like a Japanese carpenter building a wood frame temple.

Or a historical watchmaker pinning wheels onto axles. But that second comparison is just so obvious.

Moving on, we see the spring barrel connecting to the gear train to transfer energy. Underneath the gear train, up against the rear of the dial, you can see a large wheel driving the power reserve disc directly from the mainspring barrel.

Before you make it through the gear train you run into another very old and yet very new element: deadbeat seconds. It may surprise some readers to know that the deadbeat seconds mechanism is very old, and that it used to be highly desired in mechanical timepieces because it showed a clear demarcation of the seconds. Not to mention the fact that it allowed the more accurate (to the second) syncing of clocks and watches.

The regular use of deadbeat seconds lasted well into the twentieth century before electronic and quartz technology made the much sought-after dead seconds passé.

Watchmakers now generally stick to sweeping second hands to ensure that it can be easily discerned that the timepiece is mechanical.

Those not in the know might think that the second hand jumping once per second is a clear indication that the watch is quartz (but we know that it is the perfect camouflage for a sleeper). People who might care will eventually find out, but anybody just passing by will never notice that this watch packs an astonishing watchmaking pedigree.

If this were where the story ended, the Leroy Chronomètre à Tourbillon would stand as a major player on the watchmaking stage.

But it isn’t where the story ends, and it gets even better as we continue.

Where the gear train meets the escapement we find a double direct-impulse escapement, designed in the same vein as the historical Duplex escapement. The impulse pallets are made with synthetic diamond (instead of synthetic ruby) for reduced friction and increased wear resistance. This direct impulse allows for a much more precise regulator, which, in this case, also has its own bells and whistles.

The balance, performing its oscillations within a one-minute tourbillon, is designed to be self-compensating for temperature variation in the balance and the hairspring. The hairspring plays its own role: it boasts a double terminal curve, one inner and one outer, the outer being a Breguet overcoil.

The purpose of these two terminal curves is to allow the balance spring to expand and contract equally while the balance is rotating, keeping the spring more concentric and aiding in consistent period regulation. View through the display back of the Leroy Chronomètre à Tourbillon

A little bling with that, sir?

After all of this, how could it possible get any better? Well how about with a little bling?

Fourteen of the 56 jewels are diamond instead of ruby, lending the movement an almost ghostly appeal and making it seem like it could have been transported through the ages as an apparition that will disappear once you look away.

But it won’t, because it’s awesome.

There is probably a book full of information that I could touch on about this watch and its fine finishing and ingeniously complicated – what other elements contribute to making this the ultimate sleeper watch. But I want you to dig into it yourself a bit as well, find out more and gaze at the majesty that is Caliber L100.

There is only one problem with this watch: it unfortunately wasn’t selected in the tourbillon category for the Grand Prix d’Horlogerie de Genève as a finalist.

What a shame: I would have chosen it as a winner, no question. And there are tons of awesome tourbillons in that category. That tells you how awesome this watch is.

As you probably have realized, this watch is definitely more than first impressions. It’s awesomazing. Even more than the 935 hp 2JZ-GTE engine in my imaginary 1979 Volvo 240 wagon.

A breakdown…yeah, let’s do one of those! Déjà, Jamais, And Presque Vu: All Thanks To The Breguet Tradition 7047 Fusée Tourbillon Give Me Five! 5 Watches With Dead Beat Seconds At Baselworld 2015