You are here: Home1 / General2 / Highlights3 / A Xenomorph From Continuing Evolution: MCT Frequential One F110

A Xenomorph From Continuing Evolution: MCT Frequential One F110

Evolution happens. I’ve spoken on this topic before in Evolution, Chocolate Cake, And The MCT Sequential Two. What? and I am going to follow up that previous discussion with an expansion on the topic.

Evolution often results in a new species. But that is not the end of the story because, even after substantial changes, evolution continues because the environment continues to change.

The only constant in the universe is change, typically viewed as the result of entropy (going from an ordered state to a disordered state) but in systems that have an energy input, the system slowly grows and changes (as long as there is input into the system). It could be part of a cycle, or it could be a gradual change in organization, complexity, or function.

This change affects the entirety of a system until eventually the aggregate changes produce something wholly new.

If viewed continuously, one might never notice much of a change. Only when viewed at specific points in time will dramatic changes be visible. Would the xenomorph alien in ‘Alien’ wear an MCT Frequential One F110?

This accumulated change creates a xenomorph, or a strange new shape never before seen (“xenomorph” also happens to be the name of the fictional species of aliens in the Alien films) . From the Greek xeno meaning “other” or “strange,” and morph meaning “new shape,” a xenomorph bursts forth (pun definitely intended) as something resembling the old but being something entirely its own, organized for a new purpose.

When last I spoke on evolution it was in regard to the MCT Sequential Two, which I viewed as the natural evolution of the Sequential One. These models shared a jump hour display and a very similar way of reading the time, with a major adjustment made for the hour jump relative to the minute hand along with some other adjustments to the movement. But the idea was relatively similar.

In biological terms, one could say that the Sequential One and Sequential Two were neighboring populations with interfertility, meaning they can interbreed and are more or less the same species (like the wolf and the domestic dog).

I know, this is getting a bit weird, but just go with me on this one. In nature there exists a phenomenon called a ring species. This is where a population extends away from a starting point with all neighboring populations being interfertile. The end of that ring is a xenomorph, a strange new shape of species very similar to its origin but different enough to stand on its own.

That is evolution in play.

That is the new MCT Frequential One. It shares DNA and some familiar form with its neighboring population of the Sequential One and Sequential Two, but it is an end population that is, itself. It’s something new. MCT Frequential One F110 looking good on the wrist

Mechanically speaking, the Frequential One is a very new watch. Stylistically speaking, it is clearly a co-evolved result of what has come before. Gone are the rotating prisms, the large minute hand indicating the jump hour, and the three-quarter ring that jumps to uncover the current hour.

Gone also is the micro rotor automatic winding from the Sequential Two.

What has returned is the cushion-shaped case with the sandwich of sapphire first seen in the original Sequential One, the angled corner bridges of the S110, and the etched name ring around the center of the dial of the Sequential Two. But they are not completely the same, and the rest of the components will tell you why.

The etched name ring completely encloses the balance, unlike the split three-quarter ring that jumped on the hour previously. This grounds the movement and the dial, providing a much more solid and stable feeling (not that the Sequential One and Two dials were loosey-goosey). The skeletonized corner bridges from the edge of the dial visibly continue through the etched name ring thanks to four corner-mounted bridge arms for the balance bridge. No jump for you!

Next we find the largest change and the proof that this is definitely a new species, even though it shares a common recent origin. That change is the removal of the ultra complicated jump mechanism in favor of a ball bearing-guided set of hour and minute hands that are (according to the brand) placed on a ruby roller.

Without seeing an exploded view or at least a fly-through of the movement, this sounds as if the hands, which float around the outside of the central balance assembly, are guided and moving in between a ball bearing and the ruby roller to keep them aligned between the large corner bridges and the balance assembly. This also makes it seem as if the tolerances to achieve this display was rather tight – and needed to ensure proper alignment lest things bump into each other (a serious problem with complicated hand setups).

These hands run as normal as any other hands, keeping the complication in this movement lower compared to its neighboring antecedent. This could help to prove the idea of entropy, or the idea that the simpler, more honed creatures come out of evolutionary competition with an advantage.

And maybe that is just a metaphor for the harsh conditions for small brands in the watch industry. Nope, it’s probably just about biological evolution, yeah. View through the display back of the MCT Frequential One F110

The movement has done away with micro rotor automatic winding and reverted back to the biologically pure manual winding. And with it the addition of the much loved and needed power reserve indication at the top of the dial. It’s a very simple power reserve in its look, but the cutout in the dial and the subterranean red indicator provide even more depth to the already mountainous dial. (Seriously, the dial is basically a mountain. Or a volcanic cone at the least.)

Keeping the movement running, and the dial balanced, are two mainspring barrels at the base of the dial, which are also visible from the back of the movement. These barrels provide almost three days’ worth of power reserve, which gives you plenty of time to get lost in exploring the discovery of a new species on your wrist. Movement of the MCT Frequential One F110

This new species, while resembling the Sequential One and Two, is a new breed of MCT. It is shaped from the biology of its lineage while adapting to a new niche. This niche is the entry-level niche (relatively speaking), one that has much competition from other species but the potential rewards of great proliferation in the environment.

Allusions to “industry as ecosystem” aside, this watch represents something different for MCT. Being an “entry level” model for the brand, it allows a larger (albeit only marginally) segment of the market to experience the brand’s watches and version of horological excellence. The finishing and mechanics are there, the design is progressive (as were the Sequential One and Two), and the stability of the company looks promising for future growth. 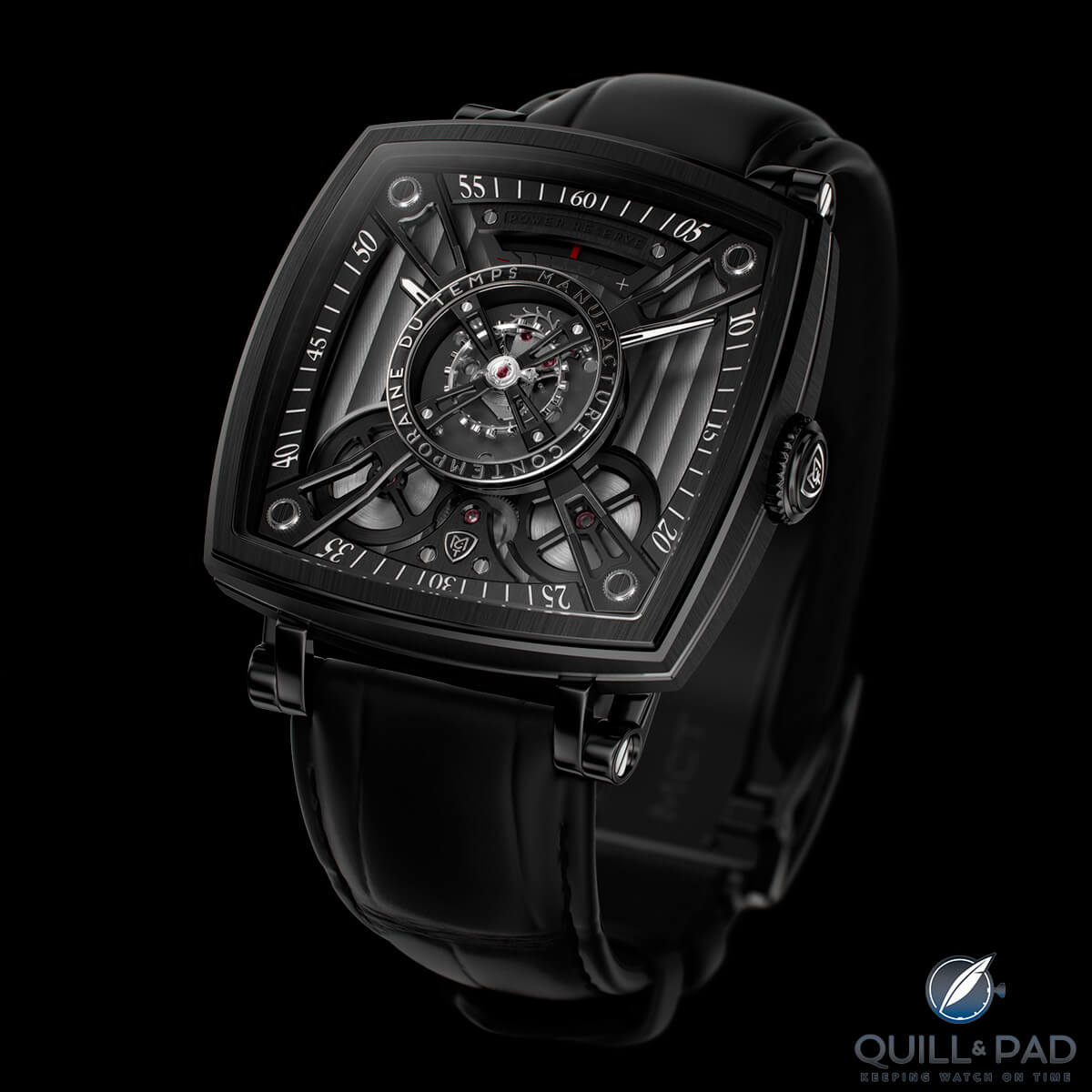 While I absolutely love jump hour watches, which contain my favorite complication, I can totally dig this new direction that MCT has gone with the Frequential One. Focusing on the balance as the main design element is a smart move, seen in interesting ways elsewhere in the industry, and I believe this shows the brand’s commitment to pushing forward into new territory.

I am excited to see what new population will come next in this ring species MCT is creating. The beginning was fantasticle!

So let’s break that boogey-woogey down!