During the launch of the world’s most complicated watch, the Reference 57260 on September 17, 2015, Vacheron Constantin launched a second rhapsodic item: the truly encyclopedic oeuvre Artists Of Time. ‘The Artists of Time’ chronicles the history of Vacheron Constantin

This tome takes an extensive look at both the inner workings of Vacheron Constantin’s craftsmanship and its grandiose history: from September 17, 1755 all the way through Reference 57260 of September 17, 2015, in fact. From ‘The Artists of Time’: the original Vacheron Constantin workshop, located on Geneva’s Quai de l’Ile

In three sections the book tells the story of Vacheron Constantin, one of the most famous maisons in watchmaking history, which also happens to be the only one to have been in continuous operation in all this time.

The first section, “An Uninterrupted Story,” relates the historical background of the manufacture in five chapters as if it were a novel. The story begins in 1755 with the craftsmen known as the cabinotiers of Geneva, which is where we encounter the young Jean-Marc Vacheron, who, by signing his first apprentice, founds his eponymous company. 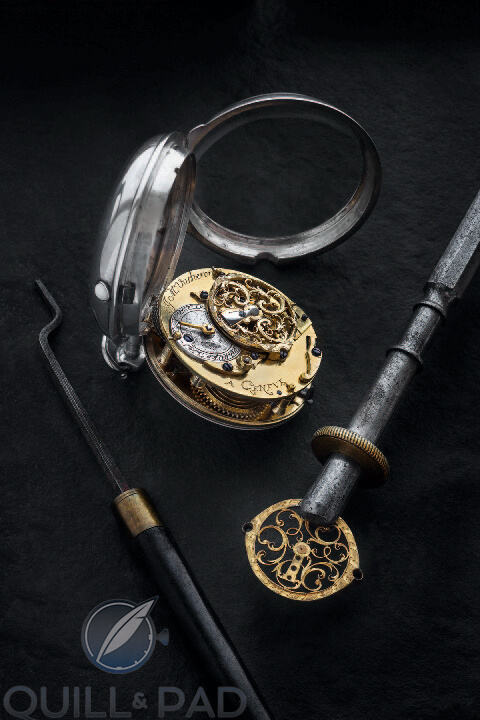 From ‘The Artists of Time’: the very first watch made by Jean-Marc Vacheron, 1755; housed in a silver case with an enamel dial, it is wound by key (photo courtesy Bruno Ehrs)

Several exquisite full-page photos of the first known pocket watch by Monsieur Vacheron accompany this chapter. This watch from 1755, signed “J M Vacheron à Genève,” was housed in a silver case; the time was read from an enamel dial. Wound by key, this precious artifact is now kept in Vacheron Constantin’s own archives.

The chapter traces history in the making: when Vacheron met Constantin, how the company fared through the various global and European conflicts, and even the period of time in the mid-twentieth century when Vacheron Constantin and Jaeger-LeCoultre shared workshops and destinies under one roof.

It also provides interesting information on the legendary pocket watches owned by James Ward Packard and Egyptian kings Fouad and Farouk – which you can also learn about in Give Me Five! Vacheron Constantin’s Five Most Complicated Pocket Watches Ever. From ‘The Artists of Time’: a peek into an early twentieth century Vacheron Constantin workshop

The second section, “Masters of the Art,” explains the art of watchmaking, including decoration and finishing, various complications, and even ultra-thin movements – something that Vacheron Constantin has always been very good at.

Ending that section is a short chapter on restoration, which, given its long 260-year history, is a very important part of Vacheron Constantin’s identity today. The third section, entitled “Master Artisans,” goes into great depth with the tasks of various artisans that embellish Vacheron Constantin’s masterpieces. These include the designer and the enameler – and it is in this chapter that the many different enamel techniques in use at the historic maison are fully explained and even illustrated by both luscious photos of historical pieces and craftspeople at work.

The guillocheur, the gem-setter, and the engraver do not come away too short, either. From ‘The Artists of Time’: a fine historical example of the type of combination of artistic elements that Vacheron Constantin is capable of (photo courtesy Bruno Ehrs)

The penultimate chapter in this section, “Combining Artistic Crafts,” explains how artistic crafts such as wood marquetry can be combined with gold and mother of pearl, while the final chapter, “Art and Technique: A Single World” provides a look at how science and art join to form a beautiful, timeless piece of horology.

The reference material at the end of the book is not only engaging, it is also very informational. This includes a full genealogical table of the Vacheron and Constantin families as they pertain to the company; a catalogue of selected timepieces representative of the company through the various eras; and the photographic credits. From ‘The Artists of Time’: a fine example of historical watchmaking for ladies in platinum and diamonds commissioned by Sir Bhupindra Singh, Maharaja of Patiala, 1916 (photo Bruno Ehrs)

The latter is important because the book is so beautifully illustrated. A great many of the full-page photos were taken specifically for this tome by Swedish photographer Bruno Ehrs. These charismatic photographs really make the extensive book pop in a visual sense.

Other photos were sourced from history museums, various archives, and art museums.

The text was excellently researched by FHH founder and president Franco Cologni and his team, who called upon Vacheron Constantin’s in-house historian, Julien Marchenoir, for help with historical details. From ‘The Artists of Time’: a trio of wristwatches belonging to the 1972 line; these three are property of Vacheron Constantin’s archives (photo courtesy Bruno Ehrs)

The English version of this book, which was originally written in French, flows beautifully thanks to excellent translation and extensive copy editing and proofing.

All in all, this oeuvre is an excellent investment for anyone interested in history, Vacheron Constantin, horology, or just beautiful objects.

And it is an absolute feast for the eyes.

Artists of Time makes for the perfect gift for the horophile in your life and is available to order online at Amazon.