You are here: Home1 / Articles2 / General3 / Highlights4 / The Pen That Is Mightier Than The Sword: Fonderie 47’s Exclusive Collaboration W...

If you’ve been closely following independent high-end watchmaking over the last couple of years, you may have seen the Fonderie 47 Inversion Principle, a very special wristwatch featuring a three-minute flying tourbillon movement developed by independent watchmaker David Candaux. However, the raison d’être of this particular timepiece is to both raise awareness about the proliferation of assault rifles (particularly AK-47s) in Africa, which makes trying to do anything at all in the region extremely difficult, if not outright dangerous, and to actively destroy these weapons. Find out how in Forget Ploughs To Ploughshares: Fonderie 47 Transforms AK-47s Into Haute Horlogerie.

Why the AK-47? “The AK47 is a mass-produced, industrial object,” Fonderie 47 CEO Peter Thum replies in answer to this surely much-asked question. “This weapon has spread around the world as a tool for state strategy, political ideology, and because of an accident of history [it was created by a communist country with no patent protections] as an open-source platform that allows anyone to produce their own version of the gun – and over twenty countries have. Since 1947, some 100 million AK-47-type weapons and variants have been produced.”

To date, Fonderie 47 has funded the destruction of more than 50,000 assault rifles in war zones in Africa. “The opportunity to work with Cross to create a new fine writing instrument actually came about quite naturally and as a result of our Fonderie 47 Inversion Principle watch,” Thum, who I like to call a humanitarian entrepreneur, explained to me when I asked how the new collaboration came about. “I was invited to a watch collector event in New York City early in 2015 and happened to run into a friend who knows the team at A.T. Cross very well. He suggested that we meet.” The limited edition Fonderie 47 pen is based on the existing Cross line called Peerless, the top-of-the-line Cross writing instrument collection. It celebrates the 1889 debut of Cross’ original Peerless pen, but also includes design elements from the brand’s Century line, which was introduced in 1935.

“I really liked the people from Cross and their passion for their company and products,” Thum continued. “We took to each other straight away; they showed great enthusiasm for our brand and its mission. Our initial intuition has been followed by shared commitment that has made the development of these pieces both fun and rewarding.” The Peerless Fonderie 47’s barrel and cap are engraved with a fluted pattern and 18-karat gold-filled (a solid layer of gold that is bonded to a base metal). But it is the black elements used in just the right amount to offset the shiny precious metal that sets this pen apart from all others in terms of design and philosophy.

Where on the back of the Inversion Principle watch the black spring barrel cover is made of melted down and re-purposed steel from destroyed illegal AK-47s (“fonderie” is French for “foundry,” a place for melting and casting metal), on the pen this material is used to form the center band. And it, too, carries the unique serial number of a destroyed AK-47. 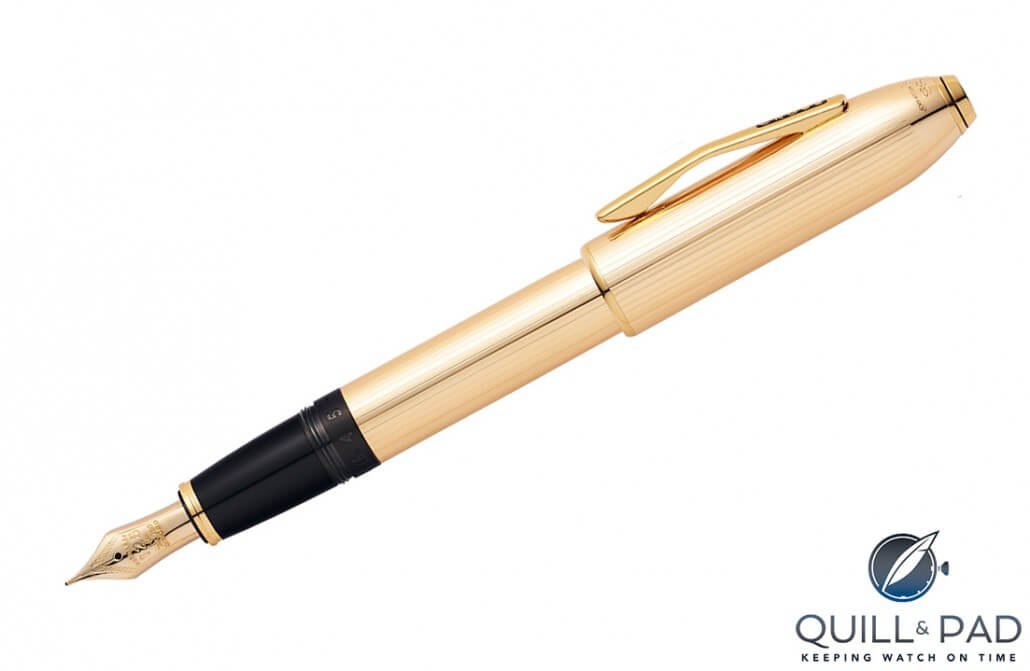 Additionally, the top of the cap likewise features blackened steel from a destroyed AK-47. Each fountain pen is also engraved with a Cross limited-edition number.

“The Cross designers and engineers have done incredible work to re-fashion our AK-47 gun steel into elegant components of these fine writing instruments,” Thum praises the pen company. Through its high-quality projects, Fonderie 47 has already been in a position to remove more than 50,000 AK-47s from circulation in Africa. Some of the steel reclaimed from these weapons is worked in the firm’s Brooklyn-based forge by an American blacksmith, who makes them into the Fonderie 47 ingots.

The Cross craftsmen then used these blackened authentic gunmetal ingots to make the customized pieces for the Peerless Fonderie 47 pen. The Peerless Fonderie 47 pen can be ordered at www.fonderie47.com/products/peerless-fonderie-47-limited-edition-fountain-pen. Each purchase of this pen funds the destruction of ten more AK-47s.

For information on Fonderie 47’s sister company, Liberty United, please read Every Piece Of Liberty United Jewelry Helps Save Someone From Gun Violence.