One of the big introductions of 2015 in the collector’s world was A. Lange & Söhne’s Zeitwerk Minute Repeater: a watch that both shows and chimes off the time using a “decimal” format of hours, tens of minutes, and minutes rather than the more traditional hours, quarters (15 minutes), and minutes.

It was a product of independent watchmaker Kari Voutilainen’s workshop. In 2004, he introduced his Masterpiece 6, a watch with a highly intuitive approach to chiming. This was followed soon after by Masterpiece 7, which additionally boasts a “Seven Daughters of Atlas” engraving on the case back. Only then did the subject of this review follow: this Masterpiece 8, which is owned by a close friend of mine.

Let’s take a thorough look (and listen) to see how this watch measures up against a set of criteria that we have also applied to the A. Lange und Söhne Zeitwerk Minute Repeater.

If there’s one word that applies here, it has to be “classical.” Just take a look at the clear display of time, simple and elegant shapes, and design cues including Roman numerals. The Masterpiece 8 is also “classic” Voutilainen: for anyone familiar with the independent watchmaker’s work, it’s easy to recognize the characteristic lugs and hands as well as its case constructed from gold wires and strips.

At first or even second glance, it is also fairly easy to mistake this watch for Voutilainen’s later Observatoire, and there’s a story behind that.

While Voutilainen proposed initial design parameters for the appearance of the dial, my friend collaborated actively with him to finalize the design, including the use of “barleycorn” guilloche in the central field of the dial. The original design proposal was to use the same clous de Paris pattern as on the ring under the numerals and to make the numerals themselves grey, with the “VIII” in either blue or rhodium coloring. Dial schematic of the Voutilainen Masterpiece 8, 2005

After considering other options and exchanging Photoshop renderings, the final design was agreed upon. Subsequently, Voutilainen asked for and was granted permission to use the same dial design on his Observatoire.

The base movement is a vintage LeCoultre ebauche; the innovation here is in executing the decimal repeater concept in wristwatch form.

This required the redesign and fabrication of multiple components and the ability to mesh them together to convert a movement originally designed to chime the quarter hours into its final form. And as with Voutilainen’s other watches, innovation in the form of bringing seldom-used classic techniques into play is also evident here, with the use of wolf’s teeth gears in several spots and the application of both a Grossman inner curve and Breguet overcoil to the hairspring to improve the symmetry of its oscillation.

It’s tough to fault the Masterpiece 8 on when it comes to actuating the repeating works; the slider glides smoothly and with little effort. There are no mechanical interlocks or other safeguards to keep the ham-fisted from damaging the mechanism, however. As with most classic repeating movements, a bit of diligence is needed to ensure that all components have come to rest before the chiming cycle is re-started. Of course, Voutilainen is known in particular for his finishing.

And while I’ve often said that in my view he has steadily improved his finishing work over the years, the Masterpiece 8 has me questioning that opinion. Seen through the loupe or in macro view, the finishing is extremely fine and consistent, and also shows the master’s touch.

In the photo below, for instance, take a look at two things: Throughout the movement, from the clean striping and circular graining to the brightly polished jewel sinks, the Masterpiece 8 is a joy to consider. And on the dial side, there’s the treat of Voutilainen’s characteristic “handmade” hands in polished gold with press-fitted blued steel circles. Kari once told me that it takes him a full day to finish one hand, and the effort – and expertise – shows.

All well and good, but how does the Masterpiece 8 sound? Listen to the video below and make your own judgment.

My view? Thanks for asking!

For me the volume is quite good, the tone nicely round, and the level of reverberation of the gongs just right for my tastes. In the spirit of full disclosure, I’m partial to a big, resonant repeater sound. The Patek Philippe 5074 with its “cathedral” gongs is pretty much at the top of my current hit parade.

Part of the explanation for the robust sound is in the vintage ebauche: one reason why vintage LeCoultre and Victorin Piguet movements are so prized is that their makers used special hardening techniques on the steel plates and bridges to increase their resonance

This makes them harder to machine and finish – making Voutilainen’s finishing work on this movement even more remarkable. The payoff is evident each time you slide the actuator. Downsides? In the recording above, you can hear the whirring regulator, but I don’t find it overly distracting. As the chiming gets to the end of its cycle at 12:58, you can also sense that the pace of the minute chimes begins to slow just a bit, perhaps reflecting an additional demand placed on the repeater mechanism by adding an additional cycle of two-toned “tens” chimes to the mix. Finally, as a one-time amateur instrumentalist, I’m a stickler for having the tonal interval between the “ding” and “dong” be a full third rather than some other combination of notes. Like the great majority of modern repeaters I’ve heard, the Masterpiece 8 doesn’t quite meet that test.

It would be impressive indeed for a major brand to make a piece of the inventiveness and quality of the Masterpiece 8 today; that it was accomplished by a tiny independent watchmaker in 2005 is nothing short of remarkable. 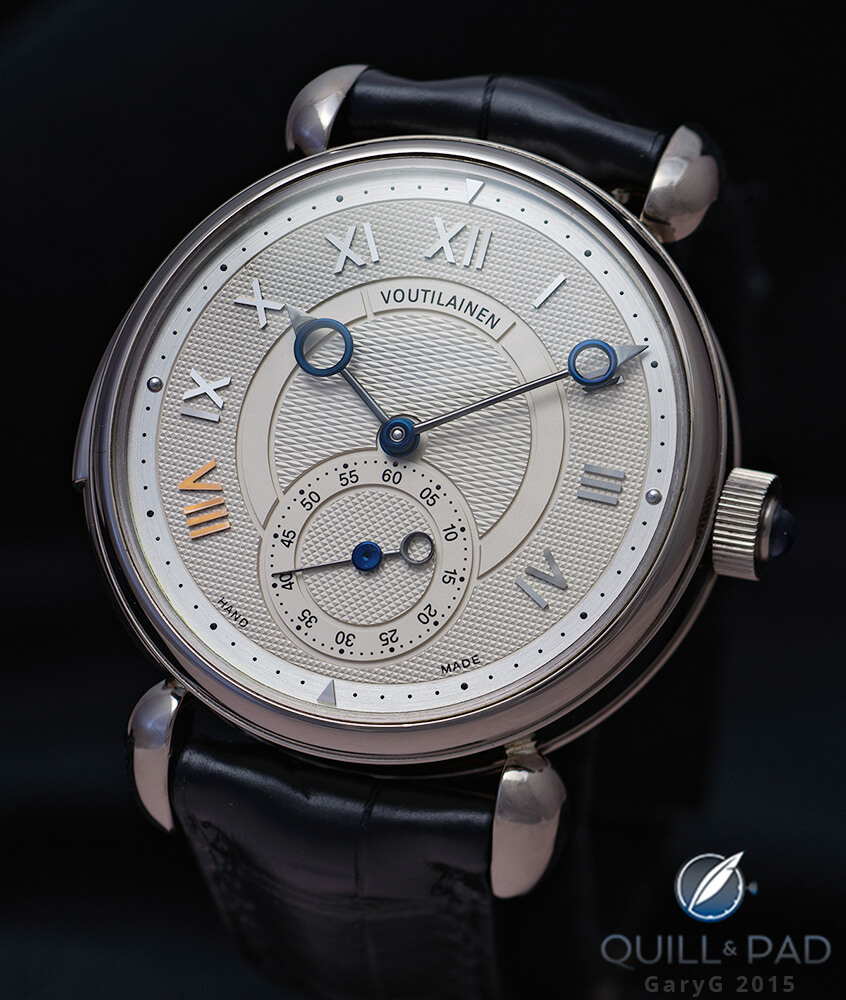 As a combination of tradition, innovation, and hand-workmanship and as a coherent work it’s hard to beat.

In addition, for the original owner, the opportunity to participate in the specifications of the watch was surely an unforgettable experience.

I’d give up that last bit to own this piece someday, but knowing its owner I have a funny feeling that’s not going to happen!