Drums are, without a doubt, the oldest and most widely used musical instrument in the history of humanity. It makes sense, too, when you think about it: not only is there is always something to bang on to make a noise, but it is also true that people have natural timekeepers in the form of beating hearts.

So it stands to reason that human beings eventually learned what types of objects made more pleasing sounds and started to construct the first purpose-built musical instruments. Technological advancements saw the design and construction of new styles of drums in pretty much every culture. Beginning with animal skins stretched across wooden or ceramic shells, the biggest leaps in drum technology came as the ability to manipulate metal increased.

Through to the modern day, the art of drum making has continued to please with different sounds, and thanks to the interconnectivity of the world people are discovering new drums from cultures on the opposite side of the globe.

And some of those people just happen to be watchmakers with a penchant for inspired timepieces. 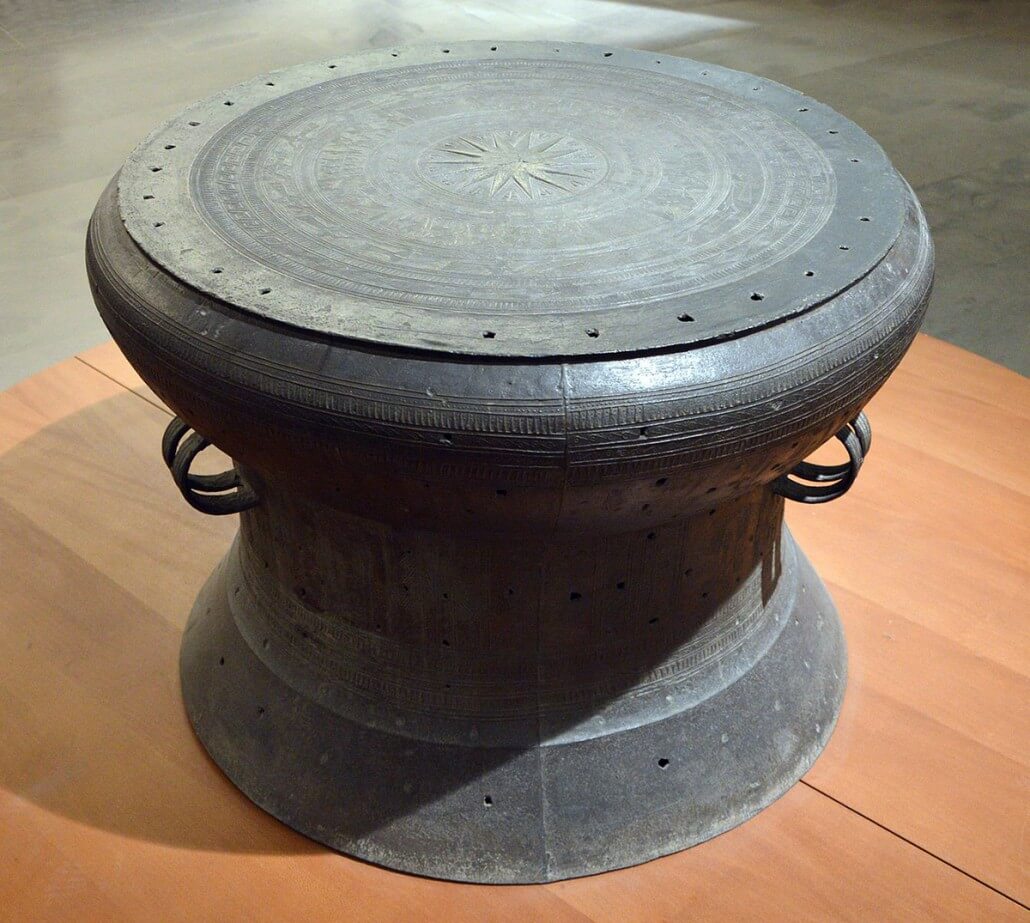 One such watchmaker is Peter Speake-Marin, whose eponymous brand’s creation, the Dong Son Tourbillon, finds its inspiration in an ancient style of bronze drums found in the Red River Delta region of Vietnam.

Both the watch and the drum are works of art in their own right, but they also happen to be immensely functional . . . as well as being super cool objects that deserve a closer look. The Đông Sơn drum is specific to Vietnam and the Red River Delta, with examples having been discovered all across the eastern world including Indonesia and southern China. They were created by the Đông Sơn culture (a term that means “East Mountain”), who were especially talented bronze casters. The bronze drums became an integral part of the culture’s society and were used during wars and ceremonies such as weddings, funerals, and prayer rituals.

The Đông Sơn drums were cast in bronze using the lost-wax casting technique. This process sees the drum parts sculpted in wax, coated multiple times by a ceramic slush, and then left to harden. Once hardened, it is fired – which further hardens the ceramic shell, thereby melting the wax in the center, leaving a hard cavity mold ready to accept a desired cast material. At this point the Đông Sơn would pour molten bronze into the mold, creating the drum components.

The drums were made from three parts: barrel, head, and leg. The barrel is the main body of the drum and would usually feature simple repetitive geometric patterns around the circumference.

The leg is a somewhat cone-shaped cylinder secured to the barrel and also bearing simple geometric patterns. The head is where the real excitement begins because the Đông Sơn created intricate carvings and beautiful depictions of life for it, usually in repeating patterns. It is these depictions that ignited a spark of inspiration in the British watchmaker based in Switzerland when he began designing the Dong Son timepiece. The carvings vary from drum to drum, but popular motifs include animals (especially birds), farming, warriors, and boats. Travel and trade via boat was crucial to the Đông Sơn people, so this imagery is readily found on many drums. Speake-Marin drew from the most notable examples of Đông Sơn drums for the layout of the dial, and the imagery is directly related to elements found on standout pieces. First, the dial is ringed by a minute track, which harkens to its functionality in addition to the geometric patterns found on the ancient drums.

Next we see a set of six egrets with fine plumage and long beaks circling the upper portion of the dial. Separating the six egrets is the Roman numeral XII, which differs from the brand’s original time-only Dong Son timepiece and the unique piece we saw in Geneva in January 2016 with diamond hour markers at 12, 3, and 9 o’clock that features two figures at 12 o’clock. Unique example of the Dong Son Tourbillon by Speake-Marin

Moving toward the center we find a separating line mimicking the rings of carvings on the original Đông Sơn drums. Inside the line, we find nine warriors ready for battle, or perhaps a ceremony, holding their weapons and sporting headdress. The warriors are positioned in between the bursts of a star, a twelve-pointed star that only displays eight points due to the tourbillon taking space at 6 o’clock.

The star rays are also surrounded by hundreds of very small circles, adding a sparkling graphic effect to the star burst detail. The star burst itself radiates with three superimposed stars providing a sense of movement to the engraving. This combines with the other engravings that create circular motion using angled lines and repeated elements. How do you do that thing you do?

The engravings for the dial of the Dong Son Tourbillon, as well as its predecessor models, are incredibly precise and very small. This requires some extra skill to achieve considering how deep the dial engraving needs to be, especially if extra treatments are being made to the dial.

The dial plate is made of 18-karat red gold one millimeter thick, while the engravings are .3 mm deep. Experimentation was done with laser and chemical engraving techniques until a special process of chemical etching was developed that yielded the best results for depth and precision.

Some places in the dial engraving are smaller than a human hair, much smaller than a laser can engrave at the depth required. The reason for that depth? Infill. There is a variant of the Dong Son Tourbillon with blue lacquer in the recess, making the raised portions stand out vividly against the deep blue underneath. The etching is so deep that even with the lacquer the etched sections have a fair amount of depth to them, creating a dial you can fall into. Fall into a tourbillon

Of course, should you fall into the Dong Son you may just end up in the tourbillon that takes up almost one-quarter of the dial. The awesome tourbillon cutaway is surrounded by a rhodium-plated German silver ring and crossed by a polished steel bridge.

The tourbillon cage is, not surprisingly, shaped in the topping tool motif that is now synonymous with the Speake-Marin brand. Glancing through the cage and the escapement reveals some wheels poking out, drawing you in to explore the rear of the watch. When you do you are in for a pleasant surprise: it’s modern. The movement looks completely contemporary; it is finished very nicely, yet with less emphasis on flourishes and more on consistency. The entire rear of the movement is dominated by a large seven-eighths plate, the rear tourbillon bridge, and a large micro rotor. All of these components feature circular graining centered around the micro rotor point of rotation.

The plate is decorated with engraved details about the watch in clear serif font, balancing the space. The micro rotor is fully skeletonized except for the platinum mass attached to the German silver rotor housing. Its skeletonizing is also very interesting because it focuses on square and straight lines, avoiding any hint of a curve.

This juxtaposition of styles between the front and the back makes for a refreshing change of pace every time you flip the watch over. The choice is extremely interesting given the considerably more anciently styled detailing on the dial. I really enjoy the change of pace instead of attempting to cover every surface with the super detailed etching. This shows you that Peter Speake-Marin takes things into consideration that many people wouldn’t even begin to think about.

Every time I speak with Peter about his pieces he points out one or two considerations chosen for symmetry and balance and for maintaining proper proportion. This may be my favorite thing about Speake-Marin watches and the Dong Son Tourbillon: every watch is extremely considered. Designs aren’t done willy nilly, and almost every decision has most likely been weighed against possible alternatives or entirely different directions. Because of this, the watches always come out looking great, and when you add engraved details mimicking 2,500 year-old designs, well that is just icing on the cake.

The Dong Son Tourbillon is increditastic for many reasons, and beauty is high on that list.