You are here: Home1 / Watch Brands & Horology2 / Jaeger-LeCoultre3 / A Regal Cast Of Wrist Candy On The Eve Of Queen Elizabeth’s 90th Birth...

And while I’m not British – even though a good bit of my family is – because of this connection I have kept something of an interested eye on this descendent of the house of Tudor and the Scottish house of Stuart.

My interest in her was seriously piqued early on in my professional career when I discovered she had worn a fantastic wristwatch to her coronation in June 1953. As any lady knows, wristwatches aren’t generally worn with fancy dresses and evening gowns, so this was indeed special. The manually wound timepiece in question –the actual make of which is unknown, though Cartier is a strong contender – was presented to Queen Elizabeth by the French president; the watch’s whereabouts are also currently unknown.

What is 100 percent certain is that it was powered by Jaeger-LeCoultre’s Caliber 101, the smallest mechanical watch movement in the world (comprising 98 components, it weighs just one gram) – a record it holds since 1929. Jaeger-LeCoultre only makes three to five examples of Caliber 101 per year, and all only upon special request. 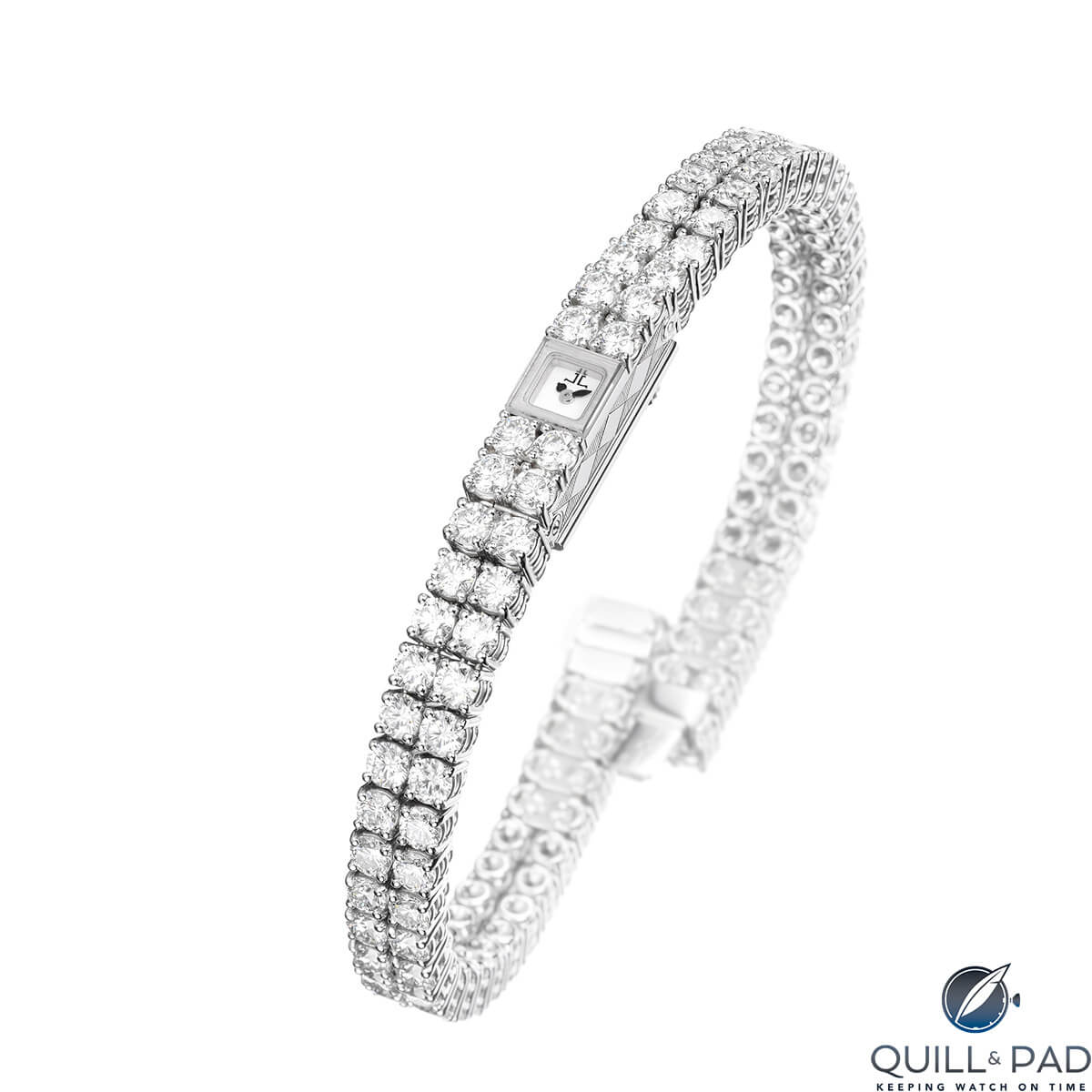 For the 2012 Diamond Jubilee of Queen Elizabeth’s reign, Jaeger-LeCoultre reissued a unique white gold edition of this model to mark the event. Then-CEO Jérôme Lambert presented it to Her Majesty on May 11, 2012 at the Jubilee Pageant.

Jaeger-LeCoultre was the official timekeeper of this event.

Another official watch for the Queen: Backes & Strauss

The Backes & Strauss brand derives from the world’s oldest diamond trading company, which was registered in 1789. It moved from Hanau, Germany, to London in the 1800s.

In 2003, having traded diamonds in pretty much the same way for 211 years, the management under CEO Vartkess Knadjian decided to enter the luxury diamond watch market. The goal was to combine the mastery of diamond cutting with the mastery of watchmaking. The Backes & Strauss watch brand subsequently launched in November 2006 in London after the Franck Muller Group’s participation had become official. Known among high jewelers as a supplier of the finest cut diamonds, Backes & Strauss is most famous for the ideal-cut diamond (also known as the hearts and arrows cut). The watch brand’s expertise remains with these sparkling gemstones.

Backes & Strauss was also given permission to create a Diamond Jubilee watch using the royal cypher (monogram) in a limited edition of 60 pieces, one for each year of Queen Elizabeth’s reign from 1952 through 2012. This watch was powered by an automatic movement.

Backes & Strauss also introduces two unique pieces in honor of the Queen’s birthday, the second of which is yet to be announced in October 2016. The Princess Elizabeth by Backes & Strauss

The first, called the Princess Elizabeth, is a 37 mm automatic white gold timepiece comprising a gold dial depicting a cameo of the youthful princess. It has been hand-engraved and high-fire enameled using English Blythe enamel in order to achieve the regal purple hue. Naturally, this timepiece just oozes the diamonds that Backes & Strauss is so famous for: it contains a total of 165 sparklers (22.61 ct).

The Queen’s 90th birthday is on April 21, 2016, but there will be no shades of Dinner for One’s Miss Sophie here: Great Britain will celebrate its reigning monarch accordingly with all the pomp and circumstance it can muster on May 12 through 15 at the private park of Windsor Castle.

And much like the Diamond Jubilee, this extraordinary anniversary celebration including 900 horses and more than 1,500 participants from around the United Kingdom will be sponsored by some of the world’s most prestigious brands.

But this time it is not Jaeger-LeCoultre who is the official timekeeper, but rather Rolex.

And I, for one, will be incredibly interested to see if Rolex issues a special-edition watch to mark the event. Watch this space.

For more information, please visit Events to Mark the Queen’s 90th Birthday and A Birthday Party fit for The Queen.