You are here: Home1 / Articles2 / Watch Brands & Horology3 / Collectors and Collecting4 / What Makes A Great Watch Gift? Personal Stories Are The Answer

What Makes A Great Watch Gift? Personal Stories Are The Answer

There aren’t many gifts one can give that will endure the test of time as well as a watch will. A gift of a timepiece has the air of timelessness, of endurance, and of value.

This is precisely why companies like Patek Philippe have slogans like “You never actually own a Patek Philippe, you merely look after it for the next generation.” Baume & Mercier’s tagline “Life is about moments” also expresses this well.

Gifting a watch to someone goes far beyond simply celebrating an occasion. It is a reminder of the occasion and a special relationship. And the person on the receiving end will remember that moment each and every time he or she glances down to see what time it is.

I have given and received many watches over the years. (What watch nut hasn’t?)

Each and every watch that I have been given has a very special story, each of which would be deserving of its own blog post. Here are some examples and brief histories of a few of them.

This Speedmaster was given to me by a friend who once worked for Omega. It launched in 2005 to commemorate the 1965 space walk by NASA astronaut Ed White. The 1965 edition is considered to be the first wristwatch in outer space. I had met him in his first few months in the watch industry during a weekend watch show for a retailer to whom we both sold watches, and over the ensuing months and years that followed I offered him any help and advice that I could.

Many years later this Omega watch, a copy of A Time Capsule – Omega Speedmaster (by Kesharu Imai, it is the story of the first watch in outer space), and a very special letter showed up at my house as a gift from my friend.

Every time I wear this watch, it reminds me how rewarding it is to be kind and helpful to people around you, both personally and professionally.

I entered the watch industry in 1999, just after my passion for watches had started. In 2014, my uncle was renovating my grandparents’ house and this very special watch surfaced. Grandpa’s 1947 Breitling Reference 181, a cherished gift from my uncle

It is the timepiece that my mother and her siblings remember Grandpa wearing for most of his life until he passed away in 1976. He had originally purchased it new for himself upon returning from service in the U.S. navy.

My uncle thought it fitting that I be the heir to this timepiece. I could only agree.

Sometimes the best gifts to give are the ones when there is no particular reason other than to say, “I appreciate you.” This is the case with this Sinn 757 Diapal.

Joe had been a client of mine for many years and had become a very good friend. While at work one day I received a text from him asking me to unlock my car, which I did without question because Joe owns a vineyard and would often drop off a bottle or even a case for me to share with friends. This time, instead of wine he left me this watch!

I called him, told him he was nuts, and attempted to refuse the gift. He insisted and said, “It’s just a thank you for always being there.”

Equally as precious to me as the aforementioned Breitling is this Accutron. It was originally given to my paternal grandfather (aka Pop-Pop) on November 1, 1980 as a retirement gift after 33 years of service for the local power company. 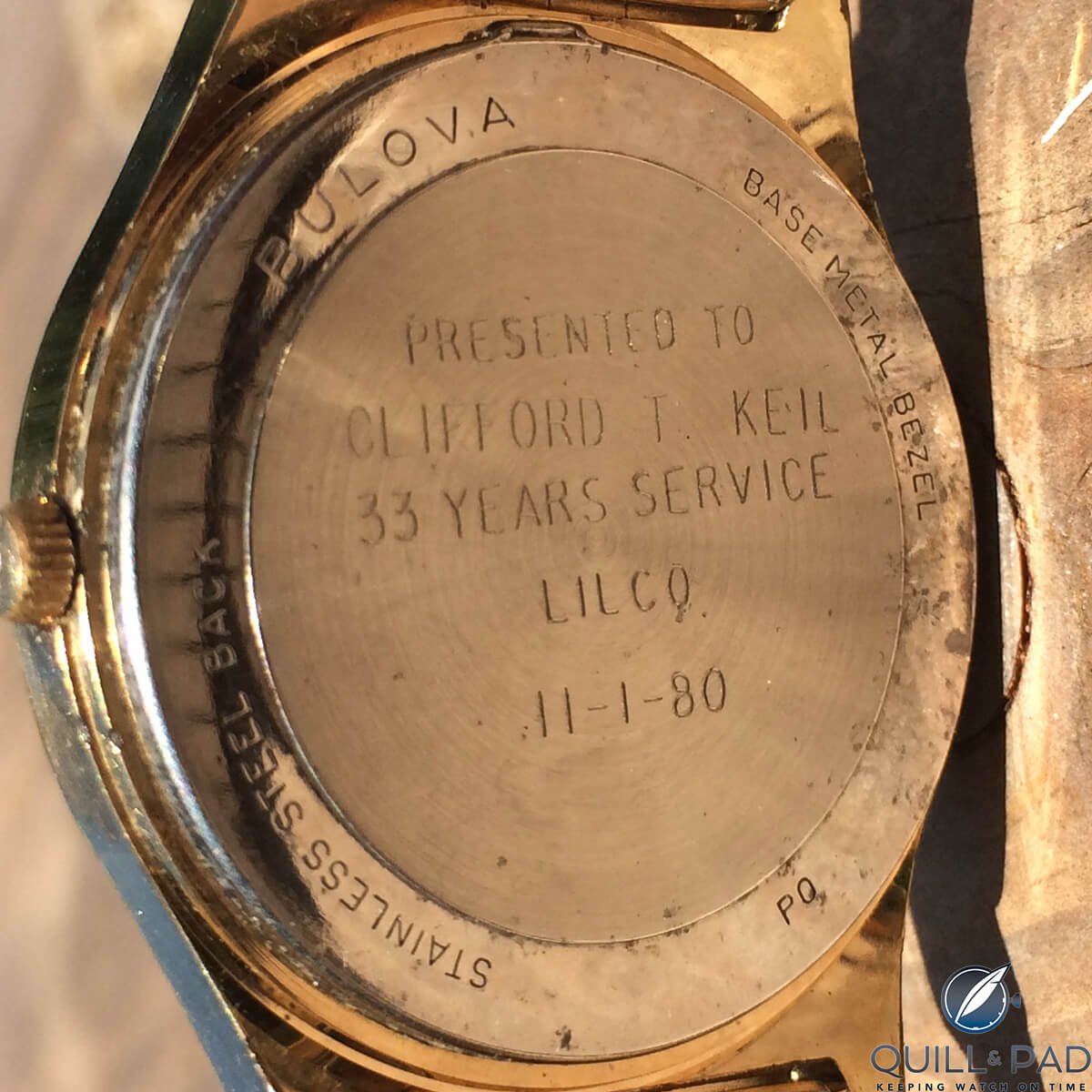 Both this and the Breitling are go-to watches for me on special family occasions and on days when I feel like I could use a guardian angel.

If you’re looking for an inexpensive yet meaningful way to commemorate an event (like a high-school graduation) or an emotion (even just a thank you), why not try the Swatch Sistem51?

I bought this one for myself to celebrate the launch of a business venture and as a good luck charm for future success. I wear it often and it makes me think of the risks that I’ve taken to start my own business and the rewards that should undoubtedly come from it. The next time you have the urge to give something special to someone and you want it to last much longer and have deeper meaning than, say, a lawnmower or a dispensable gadget, make it a watch. It doesn’t have to be the best or most expensive, and the person you give it to will appreciate it and think of you every time they check to see what time it is.

If you have an heirloom watch that tells a special story, feel free to share it with us in the comments.

Quartz: Past, Present, But No Future?

Quartz: Past, Present, But No Future? – Reprise