In 1932, a letter from a farmer’s wife to Ford Australia changed the world.

The woman, whose name has been lost to history, had a simple request for the motor company: create a vehicle that she could respectably drive to church on Sundays but still drive the pigs to market with on Monday.

Until that point, the auto market was lacking in variety when it came to utilitarian vehicles. A then-22-year-old engineer by the name of Lewis Bandt was handed the task of creating such a vehicle.

The solution was simple, really: take the existing Ford V8 Coupe and carefully graft a high-sided open bed, typically called a “utility,” onto the rear of the chassis. The result, dubbed the Coupe Utility, was released two years later in 1934. It had all the luxuriousness and styling of a car on the front and the utilitarianism of the already popular “pickup” vehicle on the rear. It had a 1.65-meter bed that could haul 550 kilograms and look good doing it. And tomorrow to church: all in a day’s work for the Holden Ute (image courtesy trucks.about.com)

Very quickly it developed a nickname that has become legend Down Under as well as the name for the entire class of vehicle: the Ute. While there have been models in the U.S. and other locales that share the Ute styling and functionality, the Australian Ute has become a legend.

The U.S. may have had the Ranchero and the El Camino, but Australia had the Ford Falcon and the Holden Commodore. There is even a performance racing series there that sees modified V8 Utes racing on circuits around Australia. The Ute with its simple, to-the-point moniker is a staple of Australian motoring, and the name has played a big part in that. And they are all different, which is highly unique.

On a dare I started playing around with the word and the individual letters and discovered that, strangely enough, something even more amazing was hidden between them: when you look really closely, extremely close like under a 10x loupe for example, you find a second “t” next to the first one that blows the doors wide open!

What do you get then? The UTTE.

And do you know what that stands for? Ultra-Thin Tourbillon Escapement.

There it was hiding in plain sight all these years. Who could have known that the secret would be discovered by a boutique watch brand halfway around the world in La Chaux-de-Fonds, Switzerland? I wouldn’t believe it if I hadn’t seen it with my own eyes. Though it makes sense that watchmakers would have found it, spending so much time in a magnified world.

And, yet, with the seemingly random coincidence hidden in the nickname of an Australian icon, the result is incredibly cool and technically challenging.

When Arnold & Son stumbled across the hidden letter and resulting acronym, it instantly inspired the development of a new timepiece. In 2013 the Ultra-Thin Tourbillon Escapement was unveiled, nicknamed the UTTE. Where the name originates should be no surprise to you by now. The new watch was amazing, beautiful, and for a short while held the title of thinnest tourbillon wristwatch.

The movement alone measures 2.97 mm in height, and when cased up the watch is only 8.34 mm thick. The highest point on the movement is actually the flying tourbillon cage, which extends out from the movement even higher than the dial.

The top of the tourbillon cage is actually higher than the hands, which requires that the crystal of the watch be domed. This is really the biggest reason the movement is kept so thin: so that the thickest component (the flying tourbillon) may extend out from the movement instead of the movement containing it.

That means that the dial and hands can be positioned evenly with or below the top of the cage instead of on top. The result led to the creation of ten references with a variety of dial designs and finishes along with a new movement finish as well, including a unique piece with a miniature hand-painted dragon dial.

The dial is separated into distinct areas: the subdial containing hours and minutes at 12 o’clock and the tourbillon opening at 6 o’clock. The tourbillon window also doubles as a second hand with a small arrow attached to the tourbillon cage pointing to a very minimal track around the edge.

The one-sided tourbillon bridge and movement are skeletonized to provide a great view of the flying tourbillon, and the rear of the movement is clean yet visually technical.

Change in the wind

In recent years down in Australia, the iconic Ute has undergone a rough spell, with the Ford Falcon and Holden Commodore being discontinued and the manufacturing plants closing as of October this year and fourth quarter 2017 respectively.

I can only surmise that the message to Arnold & Son was clear: downsize the UTTE. It was the only logical step following news of the Aussie Ute’s slow death. Skeletonizing movements can be tricky for sure, but skeletonizing ultra-thin movements is a much more complicated task, and the reason why comes down to strength.

Like a good Ute, the movement in a watch needs to be rigid and strong. As you go thinner with plates and bridges, a certain amount of rigidity is lost as the cross section of the components becomes smaller and smaller. So if you have a movement that is already radically thin and you want to remove even more material, you will have to go back and reengineer the entire thing to ensure the necessary rigidity with “less” material.

In the case of Arnold & Son and the UTTE Skeleton, the answer was to make the movement slightly thicker – by one-third of a millimeter – to 3.3 mm and carefully choose what could go and what needed to stay. The final movement architecture is a lesson in restraint and patience. Back of the Arnold & Son UTTE Skeleton’s movement

The design of the bridges now resembles ripples in a pond from falling raindrops. Concentric arcs radiate out from the center of the hands at 12 o’clock as well as from the sides of the movement creating interference patterns that don’t just look good, they form a more dynamically strong body. Some of the avant-garde skeleton watches of late favor squared or emblem-specific skeletonizing, but this layout seems more mathematically sound. And pleasing to the eye. 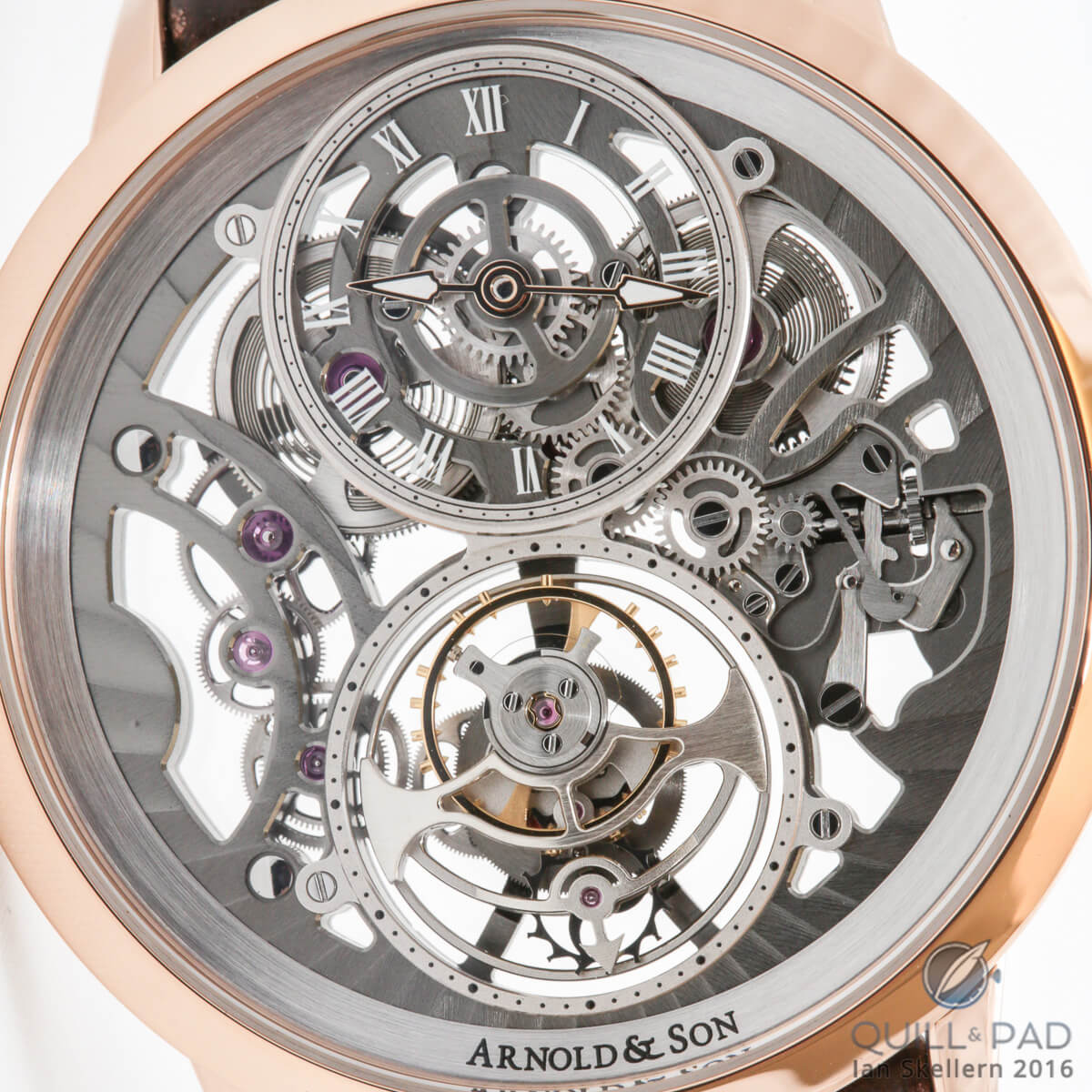 This new skeleton movement also allows for a better view into the gear train and other components. Almost every possible part that could be skeletonized has been skeletonized, save four gears and a couple of levers in the keyless works. Beside those, everything seems to have been cut away.

The view of the twin mainsprings is more impressive than most, and it provides a glimpse at the mechanics behind the 90 hours of power reserve.

The off-center dial for hours and minutes features a ring of sapphire crystal with pad-printed numerals, continuing the theme of transparency and skeletonization. The only element cut away in the original that is now whole are the tips of the hour and minute hands. These were previously blued steel with skeletonized tips, but now they are gold with lacquer-filled tips. This does add to the legibility of the small hands and dial since everything else is mostly see-through.

Most impressive is the overall size. As stated before, the movement grew in thickness to maintain required strength, and normally that would mean a thicker timepiece overall. In this watch, the thicker movement was squeezed into the same size case, meaning that some adjustments were probably made to the movement mounting position, but in the end the loss of a full dial allowed for the movement to grow into its place.

In the end, all that makes this the thinnest skeleton tourbillon watch on the market. That is definitely an accomplishment to be proud of given the amount of effort that was put into skeletonizing the movement in the first place. View through the display back of the Arnold & Son UTTE Skeleton

The technically impressive movement architecture shines, while the simple and clean case provides a solid home on the wrist. Overall, the UTTE Skeleton is an impressive update to an already awesomazing watch. And it’s all thanks to the hard work of the engineers and watchmakers at Arnold & Son and the La Joux-Perret manufacture. And the inspiration can be traced all the way back to the discovery hidden in the name of the Australian Ute itself.

Well, that last part might not be completely true. Arnold & Son really does make some extraordinary watches, but any connection of the UTTE Skeleton to the Ute vehicle may have been a fanciful imagining on my part. I’ll admit that when I first heard of the UTTE model in 2013, I immediately connected it to the Australian utility vehicle with a similar name. It’s always been in the back of my mind, which means imaginary histories and incredible fake discoveries were only a daydream session away.

Regardless of the actual inspiration for the UTTE Skeleton, it is fantastical nonetheless. While you calm down after my dramatic confession, read through the breakdown to see how this watch really stacks up!