Armin Strom makes a powerful statement with a watch called Edge Double Barrel. And it takes this resolute stance at a time in modern horological history when the only thing shrinking faster than case diameters are consumers’ disposable incomes.

Armin Strom is perhaps the most underrated high-quality Swiss watch brand active today: low-key and modest, this marque just goes about its work without blowing its horn. But what this boutique brand has achieved is well worth mentioning. The brand’s namesake was one of the great skeletonizer watchmakers of the modern era, a man who presented his own first pocket watch in 1983. Two years later, he began including wristwatches in his handmade repertoire.

Strom continued to skeletonize watches of every shape and size under his own name and as contract work for other brands until 2006, when Serge Michel’s family took over the business and Serge became managing director of the Biel-based brand. The passionate young man soon hired Claude Greisler, an experienced movement designer who learned to think outside the box in one of the great complication workshops in Switzerland – Christophe Claret – and together they have turned Armin Strom into a manufacture with its own repertoire of skillfully executed movements. Now retired, Strom continues to regularly look in on the company that carries his name. Greisler and his team of watchmakers and technicians design Armin Strom’s movements and execute their manufacture. The movements are more often than not characterized by expansive bridges and generous diameters – perfect for customizing with engraving and skeletonization – as well as having an eight-day power reserve. But while this watch is instantly recognizable as a product of the house it originates in, it boasts characteristics that embolden it and make it quite contemporary, thereby endearing it to a younger consumer with perhaps more modern taste. Then there is the look of that cool dial with a brand-typical slightly off-centered display of hours and minutes with seconds and power reserve situated in a subdial at 9 o’clock. A black numeral ring with a sleek silverized Arabic font encircles a large cutaway providing a telling view of a portion of the gears and bridges of manually wound manufacture Caliber ARM16.

This movement boasts a modernized, very machined-looking finish that is completely created by hand in a process Greisler calls “cross-grinding decoration.” View from the back of the Armin Strom Edge Double Barrel

While the finish may look machined – which was the goal – rest assured it is not; alone the hand-beveled bridges reassure the astute connoisseur of haute horlogerie that this geometrically inclined timepiece was crafted and decorated by gifted experts. When the wearer winds the watch to re-tension the pair of mainsprings for another eight days, he or she will be able to observe the twin crown wheels, whose spoke shape is reminiscent of spider legs, turning right from the dial side of the watch. 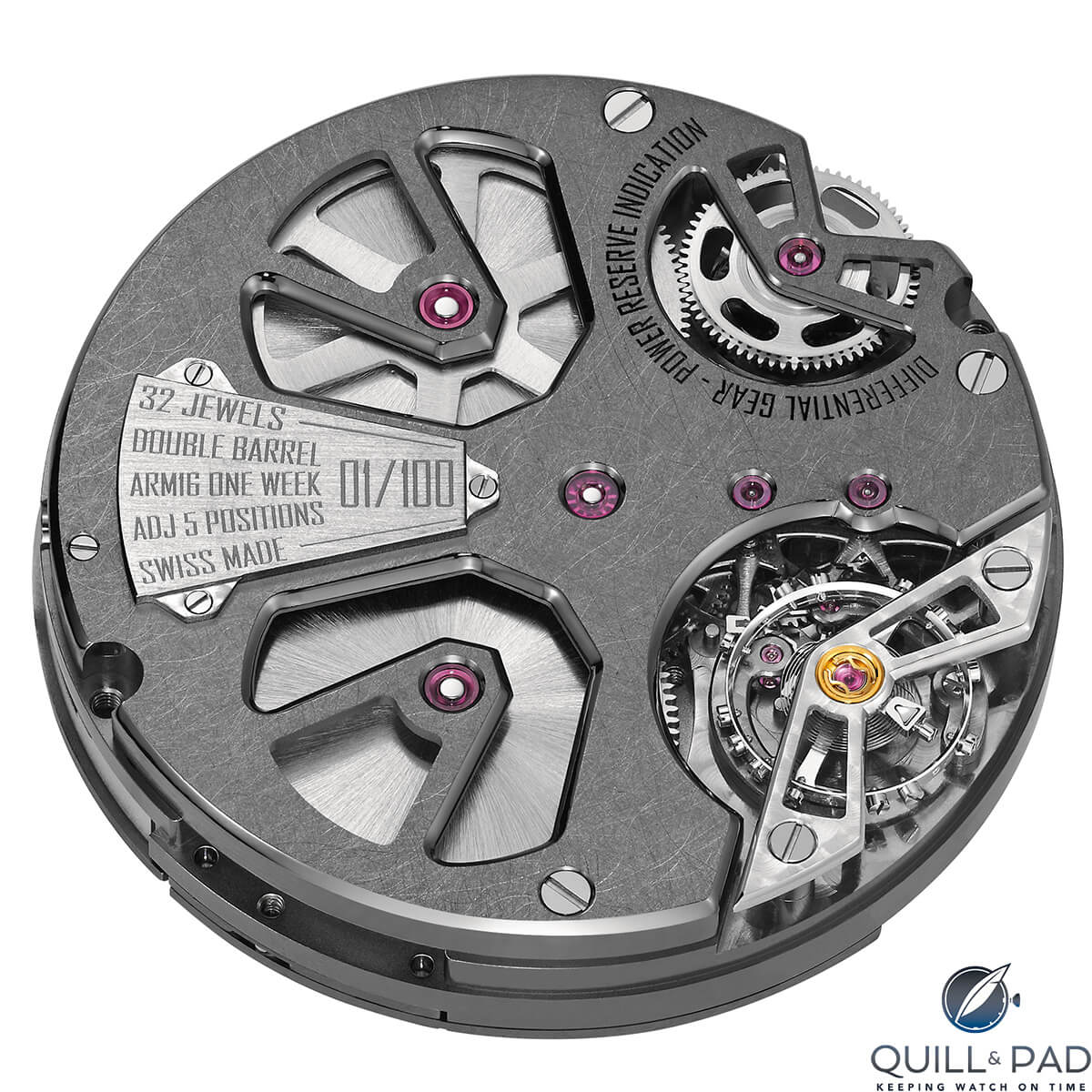 What the observer cannot see from there, though, are interesting details inside the timepiece’s movement such as an escape wheel and matching pallet fork made of solid gold with hardened functional areas and a traditional screw balance with Breguet overcoil.

This stately timepiece is also delivered with two bands, allowing the wearer to change between a black alligator skin strap and a black rubber strap – meaning the Edge Double Barrel can match the personality of its wearer on a given day. “The time is right for Armin Strom to step out with a stronger aesthetic,” says Greisler. “We’ve grown in confidence and we are ready to be bolder about our vision and design.”

I couldn’t agree with him more: this is next-level Armin Strom at its finest.