A few years ago, watchmaker Roland Murphy, founder and owner of RGM, visited a nearby company in his home state of Pennsylvania. As a watchmaker with official education as a carpenter, Murphy is always interested in connecting with other local businesses to see what synergies may be found and how companies focusing on handmade products crafted in the United States can strengthen each other.

The company he visited is an American icon: acoustic guitar maker C.F. Martin & Co., whose story began with founder and cabinetmaker Christian Friedrich Martin, who was born in Germany’s Saxony in 1796. Martin immigrated to the United States in 1833, finally settling in Pennsylvania in 1839. Today, the 184-year-old company is headed by C.F. Martin IV.

It took Martin until 2004 to produce one million guitars – which it celebrated by making a one-off handcrafted instrument in Brazilian rosewood inlaid with white gold, sapphires, aquamarines, rubies, diamonds, and fossilized ivory; its estimated worth was more than $1 million. This guitar is now on display at C.F. Martin & Co.’s own museum in Nazareth, Pennsylvania.

At the beginning of 2017 Martin’s two millionth guitar will see the light of day. And as Martin considered a way to celebrate this milestone, its CEO remembered Murphy’s visit a few years back . . .

The next one-of-a-kind luxury guitar in celebration of two million pieces produced is slated to be unveiled at the NAMM 2017 in Anaheim, California in January 2017. Standing for “National Association of Music Merchants,” this is the premier trade-only event for music products, much like Baselworld for watches and jewelry. The two millionth guitar comprises a D-45-style body with back and sides in Brazilian rosewood, while the top is in bearclaw Engelmann spruce. The guitar’s design incorporates a watch motif including decorative gears, guilloché components, decorative inlays, and a working custom RGM timepiece embedded in the headstock, which is also embellished with inlay to mimic the working watch.

“The two millionth guitar is complicated, particularly because it incorporates an actual watch into the design,” CEO C.F. Martin IV said via a press release. “But once you’re excited, you sort of put aside the hurdles that you have to jump over [to complete the project].” 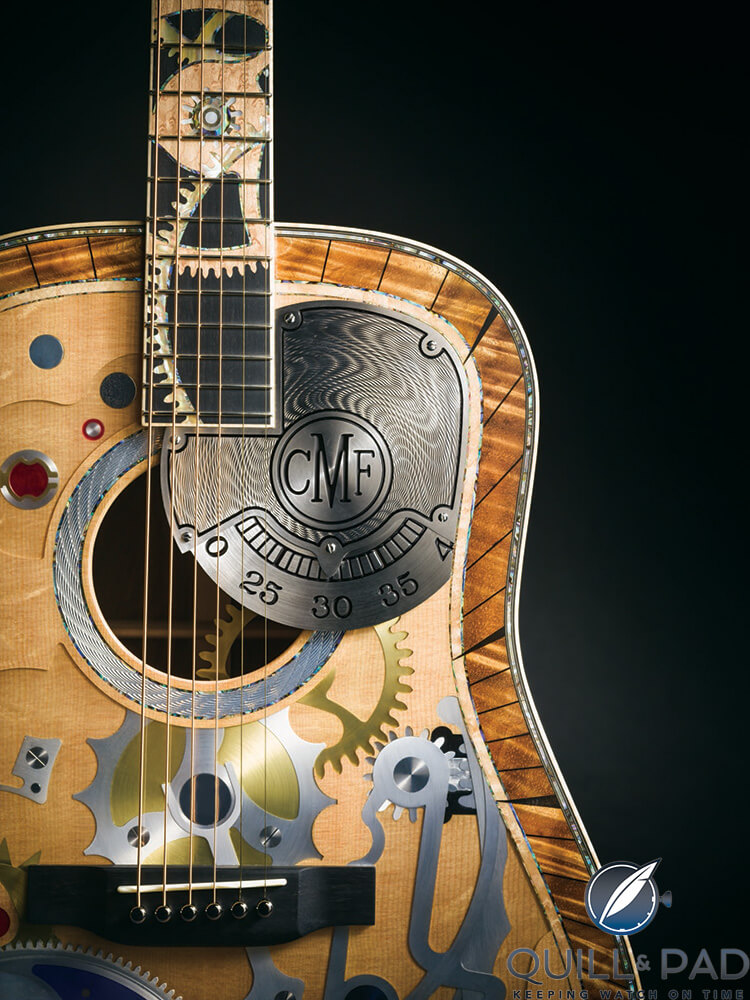 Aside from RGM, Martin enlisted other craftspeople to complete the comprehensive instrument, including: Robert Goetzl for the inlay illustration; PearlWorks for the inlay execution (this company also worked on the one millionth guitar), Waverly for special tuning gears and the timepiece’s holding bezel; and Zero Case to make the luxurious guitar case with a built-in hygrometer.

The two millionth guitar is not for sale.

The watch embedded in the headstock of the unique two millionth guitar is a custom RGM timepiece based on the design of RGM’s Caliber 20, which was introduced in 2012 to commemorate the twentieth anniversary of RGM. The movement, whose base plate and bridges are crafted in solid, untreated German silver, is an unusual and attractive rectangular tonneau shape. In addition to a precision moon phase display, which would only be off by one day in 120 years if kept running, the movement also contains an uncommon mechanism Murphy calls the motor barrel. An old American element used in high-grade watches, this sees the spring barrel moving between jewels, reducing friction and wear.

Murphy emphasizes that this is the first motor barrel seen in a watch in more than 50 years. In order for Caliber 20 to fit the its designated space in the guitar, Murphy had to redesign the base plate to match the tapered shape of the headstock. This also precipitated changing a number of other details in the movement. And a new skeletonized dial decorated with RGM’s typical guilloché had to be crafted to fit the unusual shape.

“So it’s not a square, which made it harder to create the casing for it especially because we also had to incorporate two of the tuners in that case to keep the proportions right,” Murphy explained. “We also worked on a lot of the guitar parts itself like the tuning knobs, the metal inlay, and the guilloché parts.”

In fact, all of the guilloché parts seen on the guitar were done by RGM.

Just as with the celebratory one millionth guitar, this time around Martin is once again making a small limited edition of special models for consumers to buy to offset the not-for-sale one-off showpiece celebrating the two millionth guitar. The limited D-200 Deluxe, based on Martin’s classic 14-fret Dreadnought acoustic guitar body, is equally symbolic of the passage of time as it, too, contains a unique watch theme evident in the many decorative elements. The top, crafted in bearclaw Engelmann spruce, features an aluminum rosette embellished with RGM guilloché, a decorative application that also appears on the stainless steel tuning knobs. Another ornamental detail is the triple-strand abalone pearl striping bisecting the length of each side, which references early Spanish-inspired instruments made by C. F. Martin, Sr. Lastly, each guitar comes in a premium aluminum Zero Manufacturing case with a built-in hygrometer that allows its contents to be viewed without having to open the case.

Each of these guitars comes with a freshly designed wristwatch by RGM, whose details reference the details of the D-200 guitar design. The watch and guitar are marked with matching edition numbers. “This D-200 watch is a completely new one,” Murphy explained.

The case design is strong, bold, and typical of RGM’s style with a fluted case band. Coming in at a classic 40 mm, it is crafted in Pennsylvania 316L stainless steel made right in the United States. 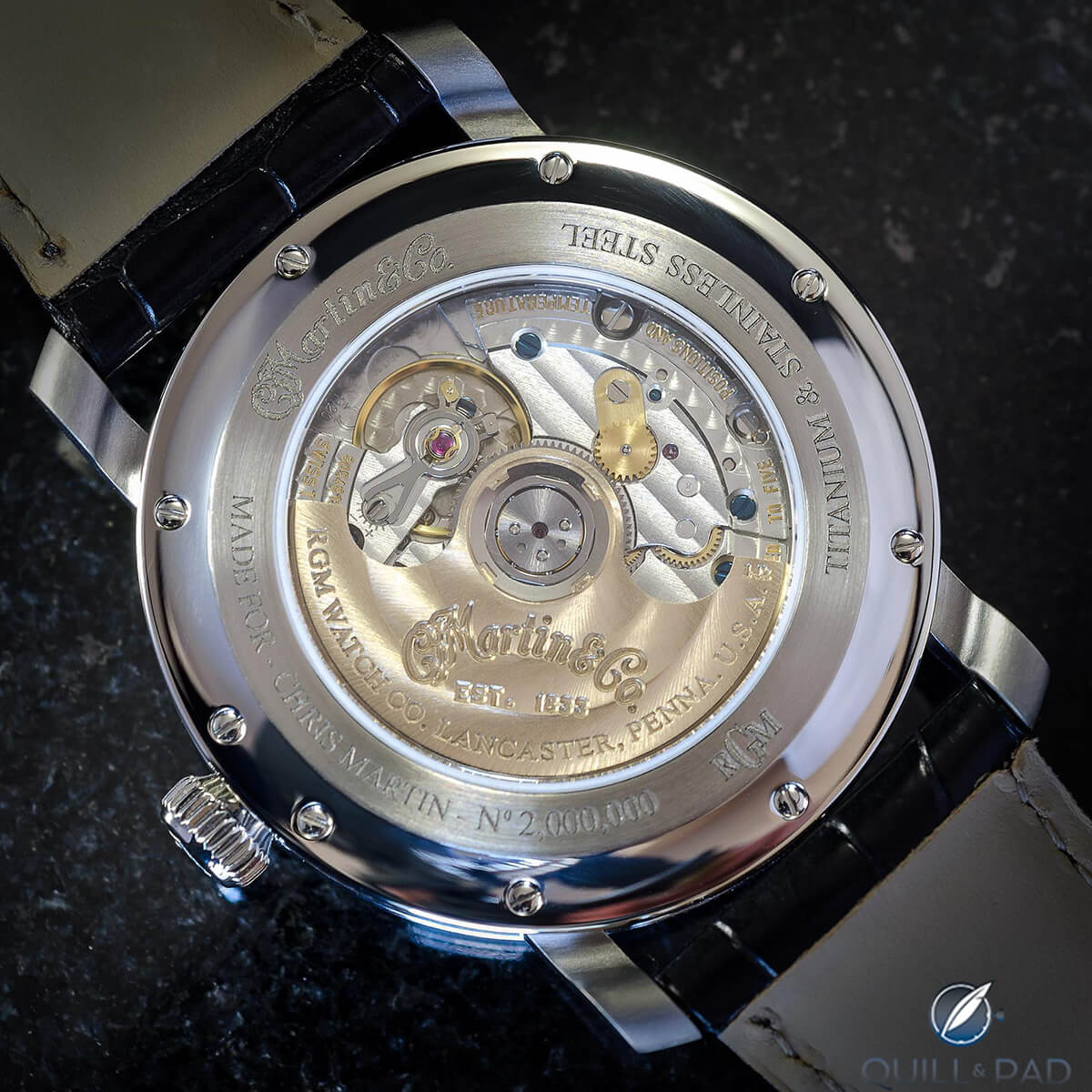 The dial is also crafted and the guilloché applied right in RGM’s own Mount Joy, Pennsylvania factory. Its design with center opening was created to mimic the look of a guitar’s sound hole. “We wanted to have a guitar element in this without making it gimmicky like a guitar-shaped element might have been,” Murphy said. The movement used is a Swiss made ETA 2892 with a special 14-karat gold rotor that RGM machined in-house.

This watch is only available as part of the limited edition D-200 Deluxe guitar set.