Medusa In The Sea: Introducing The MB&F Horological Machine No. 7 Aquapod (Live Photos And WristShots)

Jellyfish, aka medusa, are some of the most incredible organisms on planet earth. Having existed continuously for more than 500 million years, they are the oldest multi-organ animal known to man. 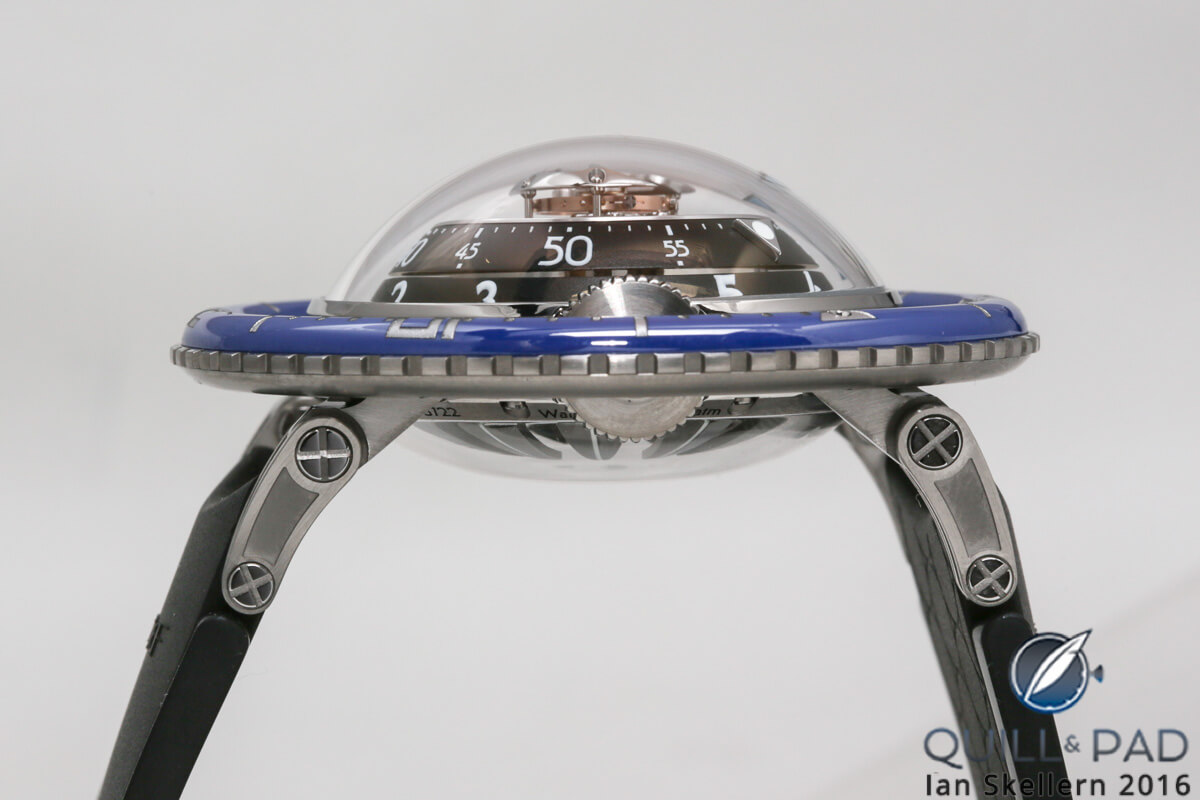 Being able to say it saw the dinosaurs come and go is a rather impressive feat. Add to that the number (more than 2,000) of known types of jellyfish and it’s no exaggeration say that the medusozoa is a highly diverse category of gelatinous zooplankton.

What a medusa is and how it functions is actually the most impressive part: the jellyfish is a non-vertebrate (no spinal cord/backbone) with a translucent bell filled with a jelly-like substance called mesoglea, long tentacles, and oral arms trailing from underneath. The tentacles and oral arms contain stinging cells called nematocysts to trap and immobilize prey before pulling it into the mouth for digestion. The nervous system isn’t centralized, instead a loose network of nerves called a “nerve net” radiates out from the center. This is a defining characteristic of radially symmetric organisms as  jellyfish are.

That is also why a jellyfish looks the same from every side; all of its features are dispersed symmetrically around its body. In many cases, that body can also create light to ward off predators, communicate with other jellies, and impress their friends. Well, maybe not to impress their friends, but the bioluminescence and occasional phosphorescence that a jellyfish is capable of creates stunning displays for anyone lucky enough to witness.

The variety of jellyfish species can vary in size from half a millimeter up to nearly two meters (6.6 feet) in diameter, and the longest tentacles on one of the largest species can be up to 36.5 meters (120 feet) long.

This also means that out there is a jellyfish that is about the size of a wristwatch, one that might provide the perfect inspiration for an aquatic-styled timepiece.

The better question is: who other than MB&F?

MB&F HM7 Aquapod on the wrist

Yup, instead of space, flight, or speed, the inspiration behind the latest Horological Machine is the almost perfect definition of peace, tranquility, and beauty: the jellyfish.

Even the jeweler Tiffany is said to have been so fascinated by jellyfish that he referred to them as the elves of the ocean. Clearly, these creatures have mystified and amazed people for centuries, and now, thanks to Max Büsser and his Friends, we can experience the advent of a medusa-themed timepiece to inspire our horological minds. HM7, dubbed Aquapod, is the first aquatic timepiece by MB&F, and while not a dive watch per se, it does boast 50-meter water resistance, meaning you shouldn’t need to worry about going for a little swim. And a little swim is just what sparked Büsser’s inspiration while on a beach holiday, where he had an encounter with one of the sea creatures.

HM7 Aquapod is, by almost any assessment, a mechanical jellyfish that tells time. It starts with a large sapphire dome resembling the bell of a jellyfish. Underneath the dome is an array of horological goodies, most of which are hidden just out of sight under the two spherical sections displaying hours and minutes. At the top is a flying tourbillon, whose bridge features the familiar MB&F battle axe shape just like in the HM6. This is the only appearance of the brand’s signature battle axe, and you’ll soon see why.

Just below the flying tourbillon, it is hard to miss a three-part ring of blue AGT (Ambient Glow Technology) lume panels that highlight the tourbillon at night, resembling the bioluminescence of many jellyfish. Following the sapphire “bell” down, we reach the hour and minute indications. These are made from titanium and aluminum, keeping the mass low and strength high, and are machined as sections of a sphere matching the arching dome above. Both of these indications rotate around the movement, providing a challenge to the movement engineers.

View though the domed display of MB&F HM7 Aquapod

Due to the large diameter of the indication rings they needed to be supported around the entire periphery of the movement. This led to the development of low-friction, large-diameter ceramic ball bearings specific to each component; no off-the-shelf parts here. These bearings allow the minute and hour spherical segments to move with very little effort, increasing the efficiency of the movement and reducing wear. This concludes our tour of the “dial” of HM7, but inside the hour and minute spherical sections reside the stacked layers of the concentrically structured movement. The movement architecture is loosely based on older “onion” pocket watches that favored vertical construction over a flatter gear train orientation.

MB&F HM7 Aquapod side on

To ensure it more closely resembled a domed jellyfish, HM7 Aquapod’s designers went for a vertical construction, actually designing the movement so that the winding rotor, mainspring, time indications, and flying tourbillon are all concentric to a central axis. This meant that the rest of the gear train needed to be stacked off to the side to bridge the gaps between each component. The energy for running HM7 slowly climbs a series of “steps” from the rotor to the mainspring, up past where it interfaces with the time indications, and finally finding its way up to the flying tourbillon. There are at least a dozen different planes of rotation moving up through the movement, sadly most of the amazing mechanics are hidden out of sight.

The best part of that is the top of the main plate completely covered by the time indications and flying tourbillon assembly, which features two finely finished plaques emblazoned with the MB&F logo and “Swiss Made 35 Jewels” for, you know, the few lucky watchmakers that will someday get to service these. But when you develop a movement in-house, you get to add little touches that only you get to see. Kind of like that centrally located mainspring, which is wholly invisible to the wearer, sandwiched deep in the movement.

But what you do get to see is better: for only the third time ever on an automatic MB&F watch, the rear winding rotor for the Aquapod is not a battle axe. The only other automatic pieces not to feature the battle axe design are HMX and HM3 Moonmachine. But what has replaced it is, oh, so much cooler.

Sorry, Max, I love the battle axe but I like the new ideas too! A set of fantastical titanium jellyfish tentacles arching toward the center of the movement like a jellyfish devouring its prey is what we find in place of the “standard” MB&F winding rotor. These tentacles are machined from a solid piece of titanium and then affixed to a semicircle of 950 platinum to ensure ultra-efficient winding. The tentacles are rather complicated, featuring angled and curved surfaces separated by a groove. Each surface alternates between polished and brushed finishes, and the groove is filled with the same Super-LumiNova as seen on the time indications. This way, when the watch is admired in the dark, it really resembles the silent, glowing beauty of its marine inspiration.

As the case glows like a deep-water medusa, the rest of the watch carries the aquatic theme forward. The entire jellyfishesque case is suspended in the center of the bezel, which surrounds the case like a flotation buoy. Four bridges connect it to the case with the lugs directly underneath these points. Geometry nerd side note: a torus is a shape like of the surface of an inflated inner tube. The bezel of HM7 Aquapod is a half-torus, blue or black (depending on version) ceramic ring with laser-engraved recesses for the markers. First, the ceramic ring is made by injection molding ceramic powder and binders, after which it is sintered to achieve final hardness and shape.

The half-torus is then carefully and precisely laser-engraved to remove ceramic material. The entire ring is then entirely PVD coated with titanium before being diamond-polished. This removes the titanium coating everywhere except for the recesses, creating permanent titanium-filled markers. The bezel may well be the first instance of a ceramic torus this small being laser engraved around its entire surface – it’s always good to be first. The unidirectional bezel, easily the most unjellyfishlike aspect of the HM7, is notched aggressively for ease of use while wet and maximum legibility. Between the bezel and the case we find the double crowns allowing us to separately wind (left) and set the time (right). This helps to maintain the jellyfishlike radial symmetry already present throughout the watch, although here the feature is bilateral instead of radial. But the reason for those double crowns is functional: if one crown had to both wind and set it would have to pull out an extra stop so mean that the orbital bezel was further from the case and that the overall diameter was wider. Two crowns enables that gap between the bezel and case to be relatively narrow. And, yet, the lugs and strap help to even out that issue by taking up space at the top and bottom of the watch. The supple rubber strap is attached to lugs protruding from underneath the bezel ring, these articulate to provide an extremely comfortable fit on the wrist..

And it’s all water-resistant to 50 meters (150 feet), not shabby for something that isn’t purporting to be a dive watch. HM7 takes its inspiration from nature and creates a pretty awesome machine for the wrist.

Aquapod diverts largely from the inspirations seen previously from MB&F and starts a new path of looking to science fact rather than science fiction, and the natural world rather than machines for inspiration. Views from top and botom of the MB&F HM7 movement

The biggest downside for me with HM7 is that the awesome movement is mainly hidden from view, because this new type of architecture could provide some interesting options for mechanical marvels in the future. I hope that there are plans to make those time indications transparent or modify how time is displayed so that the awesome movement underneath can be seen in all its glory in a future edition. The shapes created with the HM7 Aquapod represent a natural evolution for MB&F as the domed shapes have been seen in many previous Horological Machines and the tourbillon is no stranger either.

The rest is a leap to a new style, with the incorporation of abundant luminous material on a large number of parts in Aquapod showing that there are still many possibilities with the application of glowing material. Nature has many examples of bioluminescence, and this could be the beginning of that exploration.

The HM7 Aquapod was an idea long in the making (so long that the HM8 Can-Am came out first, remember) but I think the time spent developing it was worth it. A new point of reference for designers and watchmakers has been set, and the future can only be filled with more amazing things because of it. I, for one, think a visit to the ocean and to see some jellies is in order. MB&F HM7 Aquapod on the wrist