However, although Yard-O-Led is an unusual name, it also happens to be a very practical one as it states right up front precisely what made it famous. This name is rooted in the company’s first product: a pencil with a unique lead system. Yard-O-Led was founded in 1934 by Leopold Brenner when he took out a patent on a pencil mechanism providing the capacity to hold 12 three-inch (7.5 cm) leads; twelve inches (30 cm) equal one foot, and three feet equal one yard (approximately one meter).

Doing the math, you can calculate that Brenner’s pencil contained one yard of lead.

Brenner emigrated from his native Germany to England, settling near Hatton Garden in north London before World War I. Being from Pforzheim, Germany’s premier jewelry city, it stood to reason that Brenner would continue be involved in that industry. And, true to form, he introduced England to a number of fancy jewelry ranges in rolled gold and silver – and the first Yard-O-Led writing instruments. 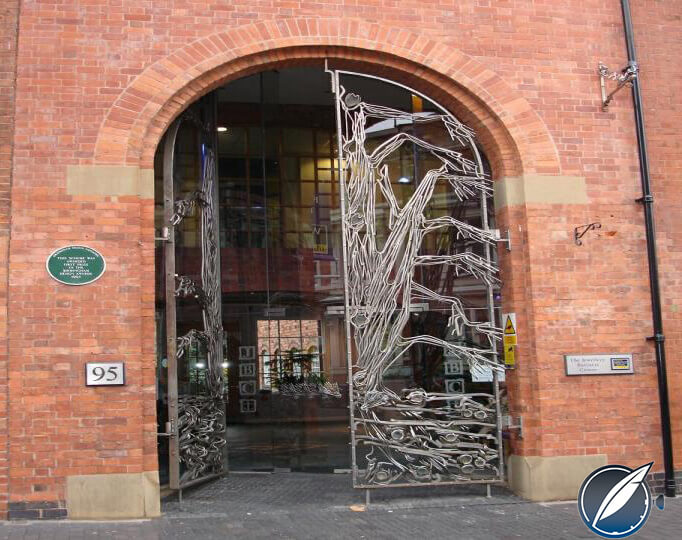 Tree motif on the door at the entrance to the Yard-O-Led factory in Birmingham, England

Englishman Frank Tufnell was employed throughout his life by Sampson Mordan, a gold- and silversmithing company located on London’s City Road. Founded at the beginning of the nineteenth century, Sampson Mordan had perfected and co-patented the first “ever-pointed” mechanical propelling pencil style, registering its silversmithing hallmark on June 23, 1823.

The pencil, called the Mordan Everpoint, was crafted in solid silver and gold and never needed sharpening.

Tufnell’s son, Frank Tufnell Jr., met Brenner in 1934, though they did not actually begin to work together until 1946 after World War II was over.

And it was in this post-war era of Europe’s rebuilding that they rebuilt Yard-O-Led, placing the workshop in Birmingham’s Augusta Street, in the very heart of Birmingham’s famous jewelry quarter.

Sampson Mordan never recommenced trading, but the rights to its name were acquired by the United Kingdom’s only other quality pencil manufacturer at the time: Edward Baker of Birmingham.

In 1952, Tufnell was in a position to purchase both a majority of shares in Yard-O-Led and acquire Edward Baker’s entire company – thereby also acquiring the rights to Sampson Mordan’s patents and retaining the link to his father’s business.

In 1988 Tim Tufnell, who had joined the company in 1972 after training with manufacturing jewelers in the area, sold the company to Filofax, a move he deemed a financial necessity.

“I felt I couldn’t make it grow much more on my own,” Frank Tufnell Jr.’s son explained when I interviewed him back in the early 2000s, though he was quick to stress that he felt that Filofax’s purchase changed nothing more than distribution structures at Yard-O-Led.

In the late 1980s, before life became as computerized as it is today, Filofax was a popular brand of what were known as organizers – a scheduling diary and useful information inside leather folders that were able to help organize a busy life in a way that until then was practically unknown. The brand was so popular that organizers were often simply called “Filofaxes” in the same way that paper tissues are often simply called Kleenex. The takeover helped Tufnell, now managing director of the brand that represented his life’s work, to attain new heights in distribution. It also earned the brand entry to the United States among other countries in which Yard-O-Led had previously not been sold.

In 1994 Yard-O-Led moved to the location at which it can be found today on Spencer Street, Birmingham only a few hundred yards from its original location. The world of high-quality products is small, and so is the Birmingham jewelry district: this location put them squarely across the street from Struthers for a time. In 2015 Imperial Yard Limited, headed by Robin Field, an entrepreneur with considerable luxury sector experience, acquired the workshop, trade, and intellectual property of Yard-O-Led, Sampson Mordan, Edward Baker, LF Brenner and other historic writing instrument trademarks. Field had previously been chairman of Filofax from 1990 through 1998. Tim Tufnell retains the role of honorary president.

“I hope and believe that [my involvement] will result in a renaissance of this great brand,” says Field.

“Talking to retailers I discovered that one of the big issues was that for many years demand had outstripped supply. The workshop is small and the number of artisans working in it had fallen over the years. I knew all of these men 25 years ago when I first worked for Filofax. Three of them were due to retire pretty soon and new people haven’t been recruited and so the amazing skills hadn’t been passed on.”

“I realized that by solving the production limitations, which we’re now on the way to doing, we could transform the business and we could do so in an area of the country in which other businesses are also being transformed and renewed.”

As Tufnell so aptly explained at the time I spoke to him, “These are basically writing instruments a gentleman would have used in the late 1800s and at the turn of the century.” Inside the Yard-O-Led workshops in Birmingham, England

The flat tops on the regent-style designs inspired by instruments from the 1880s would have originally been used to pack down tobacco or might have been engraved with a family crest or monogram and used as a wax seal.

As I saw when I recently visited, the hexagonal Sterling silver barrels are still turned and hand-chased in the company’s Birmingham workshop by one of the handful of craftsmen employed there, some of whom, like the workshop manager, have been with the firm for more than 50 years.

Like the output of an engraver working on a watch movement, the styles of each of these craftsmen are so distinctive that any of the company’s employees are able to easily recognize at first glance who created which writing instrument.

And like the above-mentioned watch movement, this makes each of the fine writing instruments created at Yard-O-Led’s workshop unique. Pens and pencils in progress at Yard-O-Led

The company has continued to manufacture the original Yard-O-Led pencil containing the separate 12 chambers with their three-inch pieces of lead through the years.

However, with the popularity of the ballpoint pen in the 1940s and 1950s, Yard-O-Led also made the switch over to that more popular writing instrument, while continuing to produce the unique pencil.

The technology of the ballpoint pen, however, did not always make it possible to retain all of the original designs, so some of them have fallen by the wayside over the years. The designs that have made it through the years are all original and crafted in-house as they are rooted in the early days of the company’s history and passed down through the three generations of Tufnell family members.

Each piece is individually numbered, underscoring the exclusivity of its quality. Every Sterling silver pen is also hallmarked with a seal from the British Assay office, confirming the quality of the Sterling silver used and location of manufacture as Britain. Each of the pens is hammered by hand at least 2,000 times to create the distinctive chased pattern using traditional turn-of-the-century techniques. Or it is worked on the same sort of rose engine used in watchmaking to create a guilloche pattern. The pens’ attractive clips are crafted from sheet silver in eight individual steps. It takes approximately five hours to complete one pen or pencil.

Though this company is rooted in tradition, its designers are constantly thinking up new ways to engage different audiences within the confines of the company’s tradition, which involves a core formed by Victorian styles.

One thing the current management has managed to do extremely well is pare the collection down to the essential so that the consumer knows where to look in order to see the main products. The Yard-O-Led collection of pens and pencils

The collection currently comprises four pencils, one rollerball, and one ballpoint pen, and they can be found in the very best stores in Great Britain. International distribution is once again quite limited as the company refocuses its energy on its home market.

Then again, picking up a modern pencil rooted in historical ingenuity and style as a cool souvenir from a long weekend in London might not be the worst idea, either.