Romain Gauthier’s First Automatic Watch Is A Stunner Called Insight Micro-Rotor, But We Expected Nothing Less From This Perfectionist Micro Engineer

Romain Gauthier introduces Insight Micro-Rotor, his first automatic wristwatch and, as one might expect, it is anything but ordinary despite the fact that it was conceived to be a comfortable, wonderfully efficient daily wearer. Fans of Gauthier’s style of watchmaking will appreciate that the Insight boasts a visible movement like many of his previous creations, though this one is powered by a micro rotor. The name Insight was chosen to evoke the fact that the inner workings of the automatic mechanics are on view, both back and front. Rarely does the fan of good watchmaking actually get to see the rotor at work winding the watch while the watch on the wrist; Gauthier has designed a watch whose style is efficient, elegant, and transparent all at the same time.

Why a micro rotor?

Gauthier always thinks everything all the way through; this is a trait that marks all of his boutique brand’s timepieces. His first manually wound calibers powering the Prestige HM and Prestige HMS models featured flat crowns on the back of the watch and both provided more efficient winding while facilitating a flatter, more comfortably wearing case (see Romain Gauthier Celebrates Ten-Year Anniversary With HMS Ten).

This style also allows the case to be crownless, which means no poking the wrist and no disturbing the design. These calibers also featured the winding pusher on the case band also seen in the award-winning Logical One (see Why I Bought It: Romain Gauthier Logical One). 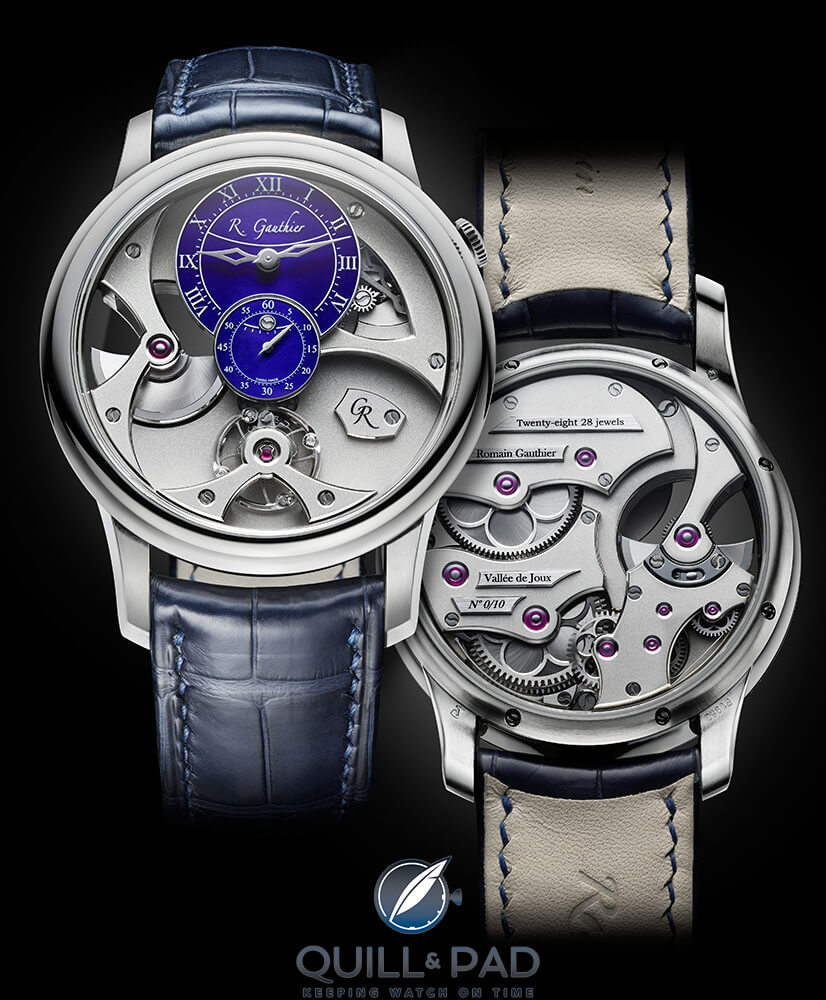 The compact bidirectionally winding micro rotor crafted in 22-karat gold of the Insight Micro Rotor is not of the usual “flying” variety (meaning only one supporting bridge on one side), but is instead supported by two bridges, one on each side, for superior stability and reliability.

Despite this, the rotor remains visible on both dial side and through the display back, making its eternal rotations fluidly and noiselessly between two beautifully designed and perfectly hand-finished bridges, each fitted with a friction-minimizing, wear-resistant ruby bearing.

The micro rotor turns between two incredibly beautiful German silver bridges that have been exquisitely finished by hand. The platinum edition features hand-frosting (my favorite version), while the movement in the red gold case is coated with NAC.

The Insight Micro-Rotor boasts a generous 80-hour power reserve, facilitated by the fact that the rotor winds in both directions to charge the twin serially coupled spring barrels. Design of the Insight Micro-Rotor

Of course, this being Romain Gauthier, nothing here is like anywhere else. Including the crown placement, which is at 2 o’clock to avoid poking the wrist.

As with many of Gauthier’s other creations up to this point, the Insight Micro-Rotor boasts an open dial that places the emphasis squarely on the beautiful mechanical design of the lovely German silver bridges and plates, making for a very harmonious and handsome visage. The curvaceous style of the bridges is also continued on the back through the sapphire crystal case back. I find the style of the four plaquettes professing the number of jewels, name of artist, place of origin, and limited edition number a very interesting design choice; the various shapes interact nicely. Back of the Romain Gauthier Insight Micro-Rotor in platinum

And, of course, on the back only the ruby red jewels break up the monochrome visuals on the platinum version. On the front, this job is taken over by the oven-fired enamel dials available in blue, black, or white.

The red gold version has a fully different feel thanks to the NAC coating on the movement interspersed with gold-colored movement elements, especially the warm tone of the 22-karat gold rotor. “Insight Micro-Rotor is a haute horlogerie creation, but also a daily timepiece that can be enjoyed for its simplicity of use,” says Gauthier. “You can wear it every weekday and almost forget that you have it on. It’s very comfortable to wear, and the micro rotor winds the barrels quickly, efficiently, and silently so you don’t have to worry about winding them by hand.”