Watch advertisements have always fascinated me.

If an ad is clever, funny, or invokes a special feeling within me, I am much more likely to make a purchase.

And there is huge money in watch advertising.

According to an article published by Joe Thompson in WatchTime in 2013, 69 watch brands spent more than $1 million on watch advertisements in the United States alone, combining to make for a staggering sum of $467,410,000.

And I’m sure that sum is larger now.

With all of the money being spent on advertising, watch brands ought to be sure that their campaign is one that invokes that “I want it” feeling.

To create the “I want it” feeling, successful campaigns use celebrities or athletes, create a comedic situation, or tug on heartstrings.

Here are a few great advertisements of recent years that I have loved. 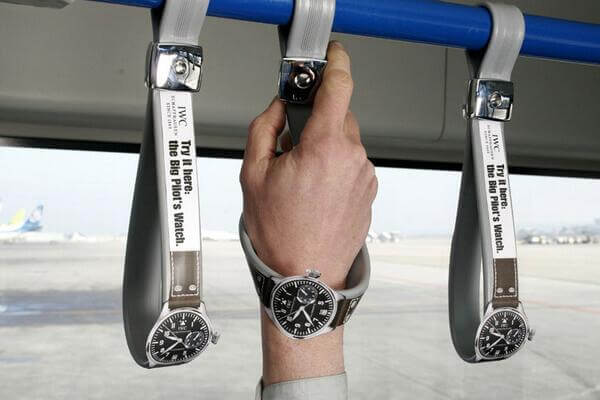 IWC turned ordinary bus straps into likenesses of the Big Pilot. This is an unbelievably clever way to goad potential consumers into trying on a watch. “You never actually own a Patek Philippe. You merely look after it for the next generation.”

You would be hard pressed to find anyone to argue that Patek Philippe’s “You never actually own a Patek Philippe, you merely look after it for the next generation” campaign isn’t the most successful in the watch industry.

Of course, who doesn’t want a Patek Philippe?

Although when you’re looking at your little mini me running the bases, it’s much easier to say to yourself (or your wife), “Hey, I’m not just spending $37,000 on me. It’s an heirloom!”

Omega is an advertising juggernaut! Check out this witty vintage ad. Albeit controversial, Hublot took some flak with the following ad (which I happen to have loved) when it first came out.

I wouldn’t ordinarily make light of someone getting beat up for his watch, however Bernie Ecclestone and Jean-Claude Biver are close friends, and the ad was Ecclestone’s idea as is described in this article in The Daily Mail. On a side note, Hublot again took flak for its marketing efforts using Floyd Mayweather, the undefeated boxing world champion who has experienced high-profile legal and ethical challenges. You can learn more about it in the Fortune post Burger King, FanDuel, Hublot each paid $1 million to sponsor Mayweather.

If you want your heartstrings tugged, another brand that does that successfully is Baume & Mercier with its “Life is About Moments” campaign. Breguet has some of the deepest roots in horology, and it is wise to capitalize on them. With some of the world’s most historical figures as clients including Napoleon Bonaparte, Marie Antoinette (see Let Them Eat Cake: The Intriguing Story Of Marie Antoinette And Her Legendary Breguet Pocket Watch No. 160), and Sir Winston Churchill – to name a few – why not brag a little? And who could forget this ad by IWC?

Offensive or not, it memorably created a buzz! Women are complicated? IWC stepping on toes in the name of marketing

If you have a favorite watch advert, let us know in the comments below. Watch Advertisements (Should) Invoke A Special Feeling, Here Are A Few That Work For Me (Reprise) Watch Advertisements (Should) Invoke A Special Feeling, Here Are A Few That Work For Me – Reprise Annual Calendars Are Goldilocks Complications: Not Too Hot, Not Too Cold, Just Right – Reprise