It wasn’t supposed to happen this way!

I was visiting a vintage watch dealer to examine a rattrapante chronograph that I wanted to add to my personal collection, however I soon became heavily disappointed.

What was should have been an excellent example of complicated horology turned out to be close to a train wreck featuring a case that had seen more than its fair share of use – which was, however, the least of the worries because close examination of the guilloche dial revealed the hand of an inexperienced watchmaker whose buttery fingers had clearly slipped once or twice with the tools.

This was confirmed by the fact that the split-seconds chronograph didn’t function properly, with hands running into each other. Although promises were made that this would all be corrected, I decided to leave the site of this accident.

With time to kill until my next appointment, and slightly frustrated, I decided to do some window shopping at a jeweler around the corner that I knew carried some fine watch brands.

Following window displays dedicated to Jaeger-LeCoultre and Montblanc, I arrived at that of Cartier.

And there it was, in the middle of the window display: a pink gold Pasha de Cartier 42! At that instant, time seemed to have stopped around me, sounds faded, and all I could see was this stunning wristwatch.

I simply had to go inside and try it on!

I was sold the minute the watch touched my wrist, despite the fact that it looked so much larger than my 38 mm Pasha. 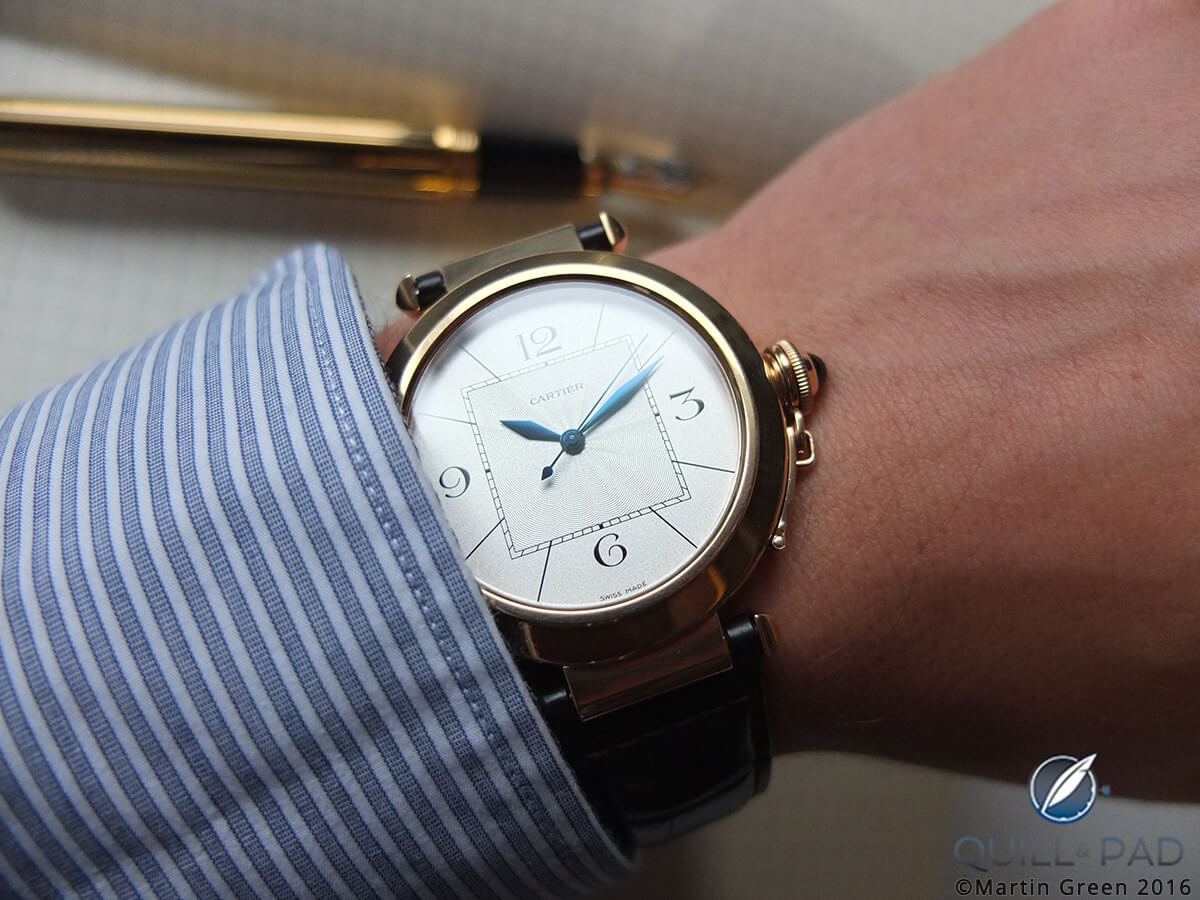 Pasha de Cartier 42 on the wrist

Of course, 42 mm in diameter doesn’t make for a small watch, especially with a very clean time-only dial and bezel.

A rational voice in my head questioned in a whisper whether this wasn’t too large for my modestly sized wrist, so I tried on other watches, smaller watches, which I had no feelings for whatsoever.

I eventually left the store, walking feverishly around. The image of the Pasha 42 on my wrist remained burned in my mind. Sapphire cabochon in the crown of the Pasha de Cartier 42

It didn’t take long for me to realize that this Pasha wasn’t too big for me at all, but in fact might actually be the most perfect Pasha I could ever wish for.

The Pasha de Cartier, designed by Gérald Genta, was first introduced in 1985.

The first series looked superficially like this more modern Pasha 42, however it was housed in a 38 mm yellow gold case. It featured a date window between 4 and 5 o’clock with no guilloche inside the railroad track at the center of the dial.

Genta did an excellent job because the Pasha enjoyed the same style and charm as all the legendary watches created by Louis Cartier and his brothers more than half a century before. That is also why I was extra excited about the movement Cartier used in the Pasha de Cartier 42. The Pasha de Cartier 42, introduced in 2005, is powered by Caliber 8000 MC. This movement is a collaboration between Cartier and Jaeger-LeCoultre.

While that might turn some watch connoisseurs off, who are picky about owning a full manufacture movement, for me it was actually a draw to the watch because it pulls the Genta design even more into the era of Louis Cartier himself.

Starting in 1900, Cartier placed substantial orders for watch movements with Edmond Jaeger, who designed them and had the production carried out by LeCoultre.

In 1907 Cartier went even a step further and made a contract with Edmond Jaeger that included an exclusivity clause as well as a guaranteed minimum order amount by Cartier of 250,000 French francs per year – in those days a small fortune. The closed case back of the Pasha de Cartier 42 Buckle of the Pasha de Cartier 42

This folding clasp was designed in 1909 by Louis Cartier in collaboration with Edmond Jaeger, once again making it a historic reference.

The whole design of the watch is very clean with the guilloche inside the railroad track adding a dramatic element to the design. It really wears like one of Cartier’s original designs, even if it’s not.

This is in fact a great compliment to Genta, but also to Cartier, who balanced every single aspect of this watch to perfection.

I thought to myself, why didn’t I fall in love with this watch sooner?

I was familiar with it, I had even had it on my wrist several times prior to purchasing it. I always thought it was a nice watch, but it never hit home for me.

Then I realized that all the Pasha 42’s that I have handled were either white gold or stainless steel, and for me it’s the warm glow of the pink gold combined with the champagne-colored dial and brown strap that made all the difference.

Accidentally in love, yet happily ever after! You might also enjoy, What’s It Like To Get Your Grail Watch And Live With It? The Story Of My Louis Cartier Tank.