Why I Bought It: Romain Gauthier Logical One (Archive)

I was sitting at my breakfast table on the morning of January 18, 2013, preparing to leave for my flight to Geneva for the SIHH, when during my morning scan of news I saw a photo of something breathtaking.

It was Logical One by Romain Gauthier – a watch I immediately knew that I would own someday. 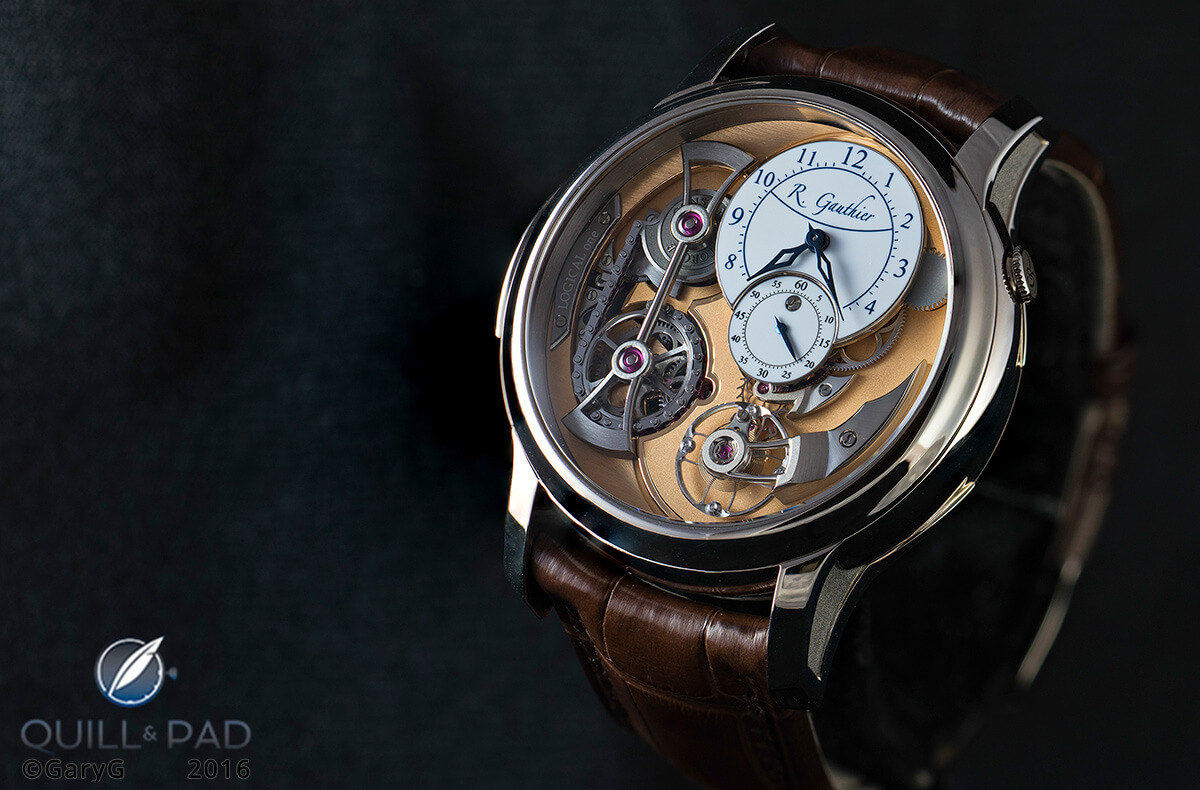 Logical One by Romain Gauthier in white gold

Less than 24 hours later, I was excitedly showing the photo to my watch pals at the Frankfurt airport as we waited for our connection to Geneva. A well-placed e-mail or two later found us sitting with Gauthier and his prototype watch the following Friday afternoon at our Geneva hotel.

I wasn’t able to order the watch on the spot and eventually missed out on the first limited editions in pink gold and platinum. But fast-forward a little more than two years to the spring of 2015 and I was writing to Romain after the introduction of two new Logical One models in white gold and titanium to check on pricing and availability. Reverse of the Romain Gauthier Logical One

Why I bought it

When the new editions came out, I had the advantage of having seen the earlier prototype; but as always, it’s best to see one’s exact future watch in the metal whenever possible. So when our schedules took us both to New York, I took the opportunity to visit with Gauthier to see the new pieces in person.

To say that I was captivated by the white gold version with frosted gold movement would be a considerable understatement. Of all the versions of the Logical One, this is “the one” for me in the same way that others might only consider a platinum A. Lange & Söhne Datograph or stainless steel Rolex Daytona.

In short, the first reason I bought this watch was that it looked absolutely spectacular to me! A few weeks later, a very good watch pal of mine and I traveled to Las Vegas to meet up again with Gauthier and see three watches: the white gold and the blackened titanium versions, as well as a (then still unannounced) “natural” titanium version.

My friend also fell in love with the white metal/gold movement look on the spot. After a few e-mail exchanges with a third collector friend who favored the black titanium look, all three of us signed up for what became a set of remarkable “buddy” watches.

The ability to share the joy and excitement with good friends was yet another key purchase motivator for me. Movement detail: winding system and power reserve of the Romain Gauthier Logical One

According to my friend Terry’s taxonomy, this was definitely a “patronage” purchase for me: bought in recognition of Gauthier’s brilliant work, in support of his ongoing independence, and stemming from a desire to own a timepiece that represents his personal vision and talents.

Why I love it

It just looks great: Yes, I know that’s subjective, but just look at it!

I’ve already mentioned the contrasting colors; the great finishing has already been the subject of another article here on Quill & Pad (see Why We Are In A Golden Age For Appreciating Superlative Hand-Finishing In Wristwatches); and the striking ruby rollers on the movement’s chain, especially as seen on the early examples of the watch (more on this later) provide tremendous visual interest.

I particularly like the way that different textures, both machine- and hand-applied, are used to draw the eye to different portions of the watch. The use of shapes and areas of lighter and darker colors present a balanced overall view.

And, I’m a sucker for three-dimensionality as the following double wristshot makes clear. Deep dimensionality: the author’s Romain Gauthier Logical One and Greubel Forsey Invention Piece 1 side by side on the wrist

It’s inventive: The idea of taking the concept of a multi-level fusée and chain and re-imagining it as a shorter, larger chain on a single level, attached to a snail cam rather than to a cone (fusée), is simply fantastic.

And that’s not the only innovation here: there are other bits ranging from the unique shapes of the gear teeth, to the push-button winding system, to the see-through, low-friction sapphire spring barrel that is both beautiful and functional. Innovation in action: constant torque assembly of the Romain Gauthier Logical One

It’s functional: The whole objective of the snail-and-chain mechanism is consistent timekeeping throughout the mainspring’s journey from fully wound to completely exhausted.

And as the timing sheet that accompanies the watch shows, the constant-torque movement design succeeds in virtually removing all negative effects on isochronism throughout the movement’s 46-hour power reserve.

It’s thoughtful: Gauthier clearly gave a lot of thought to design choices, large and small, that make this watch a pleasure to wear. One example is the slightly concave bezel that allows it to gleam with a high polish while at the same time being less likely to scratch than a convex or flat bezel.

Another item is what looks from above to be a cylindrical bar connecting the two ends of the bridge over the constant-torque mechanism is in fact two shapes: a polished, upper portion with a semi-circular cross section atop a brushed straight-sided lower element. Gauthier explained to us that he made this choice both to yield a stronger brace against the forces in this part of the movement and to avoid the difficulty and cost of finishing a perfectly cylindrical component, particularly as the bridge is titanium and very difficult to file and polish.

As an engineer, I found discussion of this and other choices highly informative and interesting; as a viewer, I find that this particular visual trick bothers me not at all.

It’s evolving: You can tell that I love this watch because I even love that it has changed since its introduction and may change again!

If you look carefully at photos of the original Logical One prototype and compare them with images of the production versions, you will find some pretty significant updates. 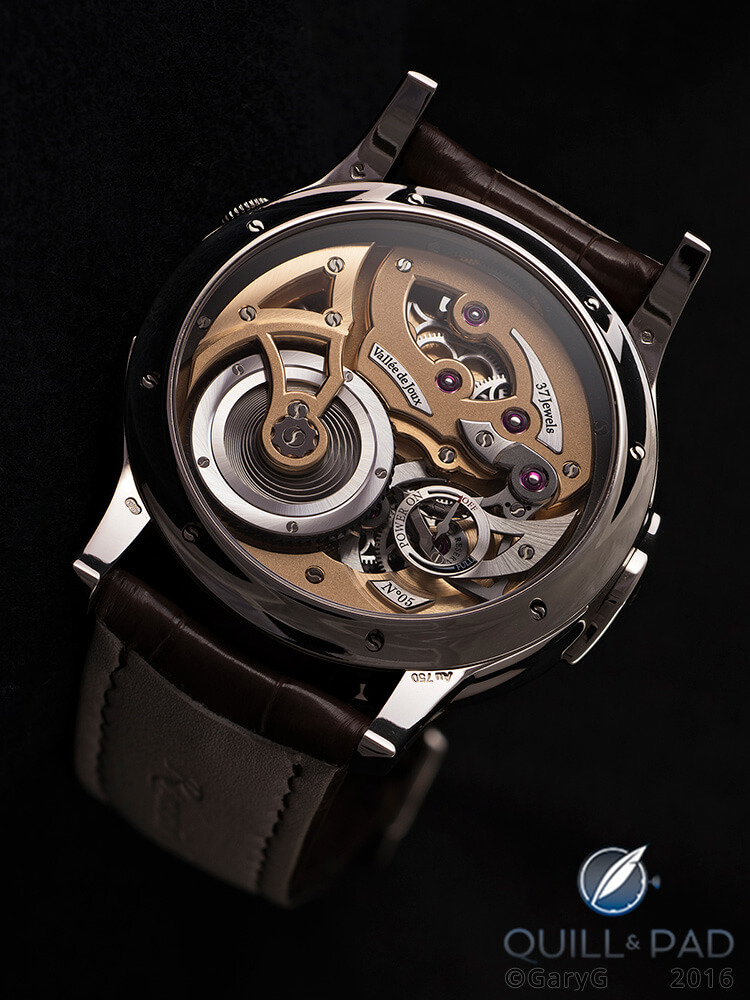 Among other things, the entire winding and power reserve mechanism is significantly revised and occupies an entirely different vertical location on the reverse of the movement; the sapphire crystal cover of the spring barrel is now plainly visible (and beautifully transparent); and the shapes and elevations of some of the supporting bridges have changed more than once as well.

On the dial side, the impossibly slim constant-torque chain with its prominent ruby rollers turned out to be, well, impossible to execute. It has now been replaced with a broader, more robust version. The rollers are still there, but just that tiny bit harder to see. Within the movement itself, the number of jewels is up and the claimed power reserve down from the initial models.

That said, I find it remarkable that Gauthier is able to identify and rectify emerging issues quickly. Following delivery, I experienced a bit of a problem with the tracking of the chain on its lower wheel; rather than simply adjusting the watch and returning it, Gauthier and his team diagnosed the issue and designed, fabricated, finished, and installed new parts within a few weeks.

And while they were at it, they implemented another precautionary modification to the winding system. The author’s Romain Gauthier Logical One post-service: can you spot the difference?

It wouldn’t be a fair review if there weren’t one or two! I’ve already mentioned the less prominent ruby rollers and reduced power reserve above, so I won’t dwell on those here.

From a functional perspective, the push-button winding is significantly improved from the original version but still takes a bit of effort and dedication.

From a visual viewpoint, I do wish from time to time that the lovely enamel dial had markings for the minutes between 27 and 33 past the hour similar to those on Gauthier’s standard dials. 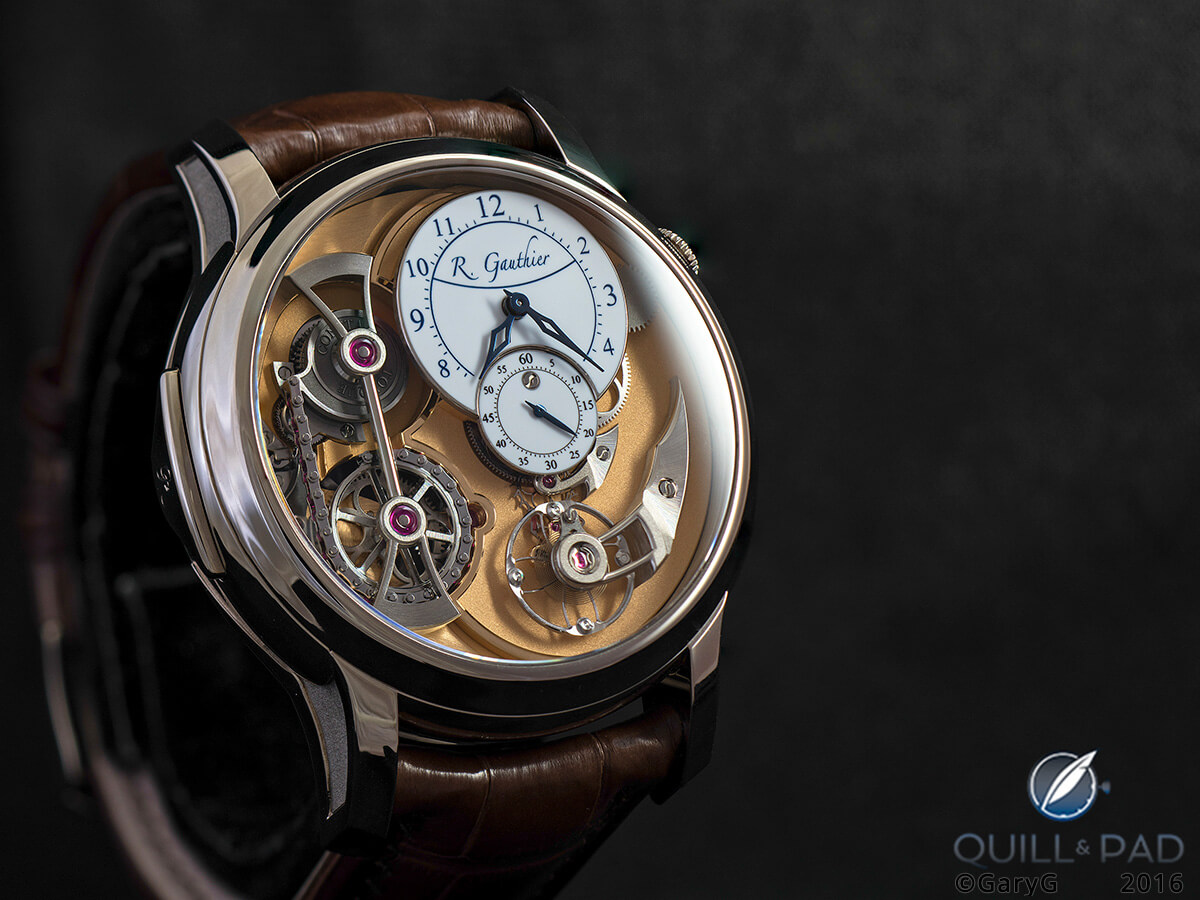 A lot to love: Romain Gauthier’s Logical One in white gold

Is it right for you?

As always, watch choice is a highly personal thing. The Logical One might be just the watch for you if:

I’ve considered the tradeoffs, and I’ve clearly made my own choice! *This article was first published on February 16, 2016 at Why I Bought It: Romain Gauthier Logical One.