The final round of the 2017 America’s Cup begins on May 26, 2017, which makes this a great time to take a look at the best hotel on the island, one that has been hosting the competition for the last two years: The Hamilton Princess & Beach Club, a.k.a. the “Pink Palace.”

When Oracle Team USA won the America’s Cup in 2014, it not only took home the oldest trophy in sporting history – the Auld Mug – it also earned the right to become the organizer and director of the 2017 competition. Along with that came the right to choose the location of the event. 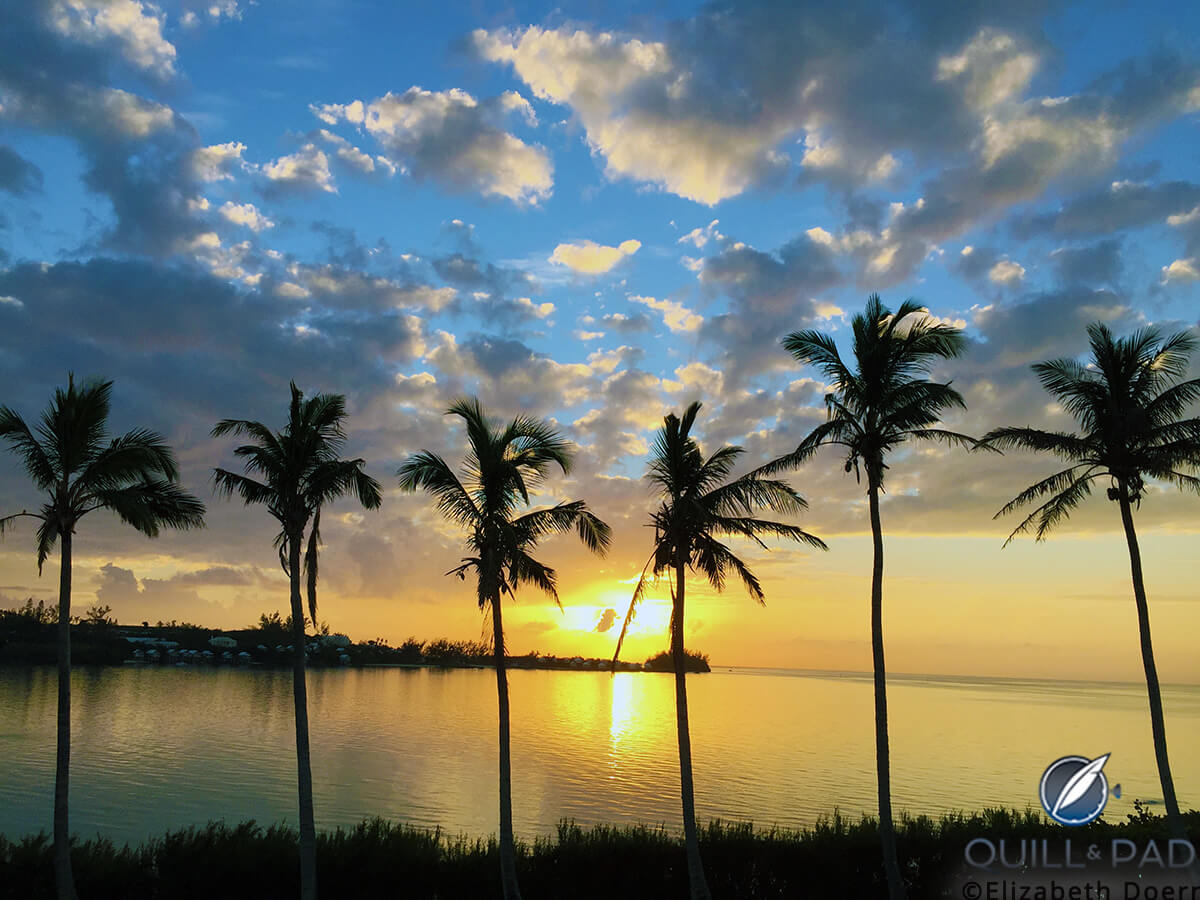 Oracle Team USA chose the island of Bermuda, located off the east coast of the United States, even though it is territory that officially belongs to the British Commonwealth.

The island, known as a financial haven for many years, took the opportunity of hosting the competition to increase its marketing presence as a vacation spot and has been seriously promoting its goods and services internationally.

Oracle Team USA has named the Hamilton Princess & Beach Club, a Fairmont property (the same group that owns the Plaza in New York City), as the official hotel of the America’s Cup. This was an excellent choice as it is widely recognized as the best hotel on the island. The entrance to the Hamilton Princess & Beach Club in Bermuda, which opened in 1885

During a trip to Bermuda in February 2017 with Panerai to witness the unveiling of Oracle Team USA’s final 2017 America’s Cup boat (see Panerai Sails Into The 35th America’s Cup With Oracle Team USA . . . And More), I had the good fortune to stay at this hotel for a couple of days.

One of the great perks of my job is that I travel a great deal to luxurious places and events, which often allows me the opportunity to stay in superb hotels that I might not have otherwise had the chance to visit. Therefore, I have developed a relatively keen eye for detail when it comes to luxury accommodation. The moon gate on the Hamilton Princess & Beach Club’s property: this traditional element of Bermuda architecture with Chinese influence is found throughout the island

The Victorian colonial-styled Hamilton Princess & Beach Club is a five-star property, but what I find pleasing about it is that its atmosphere doesn’t as feel snooty as the same star rating in Paris would bring about. Bermuda is a fairly casual place – I mean, come on, men wear suits with pants that are actually Bermuda shorts – and the demeanor of the ultra-friendly employees of the hotel as a whole radiates this attitude throughout.

But the laid-back approach also leads to some less desirable traits in a luxury property. For example the (extremely well appointed) fitness room’s water cooler had no cups at 8:00 am; my in-room breakfast order was never picked up overnight; and when it did show up after I called down, essential breakfast items were missing from the tray. Overall, I would not recommend the room service as a breakfast alternative here anyway. The breakfast I received was not satisfying, which led me to try out the restaurant for breakfast the following morning – and that was truly worthwhile as the breakfast there was loaded with beautiful, fresh fruits and all kinds of warm entrees and pastries.

My “signature” room, one of 157 recently renovated rooms, whose balcony opens out over a truly breathtaking view of the grounds and Hamilton Harbor, was furnished in a sober, modern way that still managed to remind me that I was in an exotic locale. The room was spacious at 35 square meters (375 square feet). However, it was obvious that this hotel is not quite set up for professional business travelers as the wifi signal was quite weak (a real pet peeve of mine for obvious reasons) and there was no minibar in the room.

As a resort hotel, though, the pool landscapes (there are two) and gorgeous oceanfront private beach make it outstanding. A luxury spa called Exhale is also available, which opens into the incredible fitness room, but unfortunately I did not have time to visit it. Three restaurants round out the hotel’s offer, one of which – Marcus, run by star chef Marcus Samuelsson – has an excellent reputation, but was unfortunately closed while I was visiting.

Two bathroom standards that I notice (when they are lacking) was the absence of a dedicated makeup mirror and bathroom slippers. But the calming views from the “Pink Palace” make up for any oversights in the otherwise adequate bathroom arena. Art to soothe the soul

These details were more than compensated for, however, in the one big reason that this hotel has been singled out on many review sites: the wonderful art hanging throughout the hallways of the light and airy hotel is amazing. The art collection spread throughout the hotel and on continuous display includes top names from the world of pop and modern art, including Jeff Koons, Banksy, Andy Warhol, Ai Weiwei, and Damien Hirst.

A Koons piece hanging over the main fireplace in the spacious yet cozy lobby, for example, is from a limited edition of four unique pieces by the American pop artist. Made of glass, carbon fiber, plastic, and stainless steel, like most of Koons’s art, it explores the artist’s search for meaning in an era oversaturated with media and entertainment. You can see a full description of the artworks found in the beautifully appointed hotel in a booklet called Little Book of Art.

Or you can take a guided tour of the art should you be staying at the hotel. The tours take place every Saturday at 10:00 am and upon request.

If you get tired of looking at art, swimming, sailing, or sunbathing, you can shop in one of the many boutiques in the 7,000-square-foot lobby, including a fully stocked watch and jewelry store and the official America’s Cup store.

The hotel is located just outside Bermuda’s capital city, Hamilton, where the race village is situated. It is about a ten-minute walk to Front Street, the epicenter of the city, along the main road that circuits the island. Front Street is a colorful grouping of bars, restaurants, and shops – though these are hardly visible when the race village is up and running. The races take up all of one’s capacity to experience! And if you have brought your boat to Bermuda, you can take advantage of the full-service hotel marina with berths for up to 60 ships.