The Phillips Hong Kong Watch Auction: FOUR, which took place on May 30, 2017 in Hong Kong, particularly interested the team at Quill & Pad due to the presence of a subset of 43 watches for sale called “43 Watches & Encounters: The Laurent Picciotto Collection of Contemporary Watches,” comprising the first personal collection of a watch retailer to ever go under the hammer.

In a nutshell, this grouping comprised 43 modern timepieces that Picciotto, founder and owner of Paris’s Chronopassion, had personally collected over the years.

ED: As I mused in Phillips Auctions Personal Collection Of Chronopassions’s Laurent “Pack Rat” Picciotto In Hong Kong And There Is Much Treasure Within, my great point of interest was to find out whether the watch-buying public could relate to Picciotto’s collection, which comprised a great deal of independent watchmakers and boutique brands as well as some crazier pieces from bigger brands. The “43 Watches & Encounters” watches came in at 63 percent above the total low pre-sale estimate, which is a remarkable result whose details we will examine throughout this post.

IS: I have to admit that the auction results far exceeded my expectations: I expected a few pieces to do very well, quite a few to sell around the low to middle end of their estimates, and quite a few to not reach their reserves. As it turned out, the majority sold at the high ends of their estimates with many more than doubling their top estimates. I was also surprised that the demand was so strong even for little-known brands or pieces.

GG: If you don’t mind, Elizabeth and Ian, right here I’d like to interject something while we’re on that subject: while it would be a bit harsh to characterize this auction as “Richard Mille and the 39 Dwarves,” there’s a bit of truth to that statement. The five Richard Mille watches owned by Picciotto pulled in more than half of the total realization, with the other 37 pieces that sold drawing an average of $19,000 per watch. ED: Indeed, Gary, in particular it was lot 1033, a unique RM008 in DLC-treated titanium that came with a Mille-to-Picciotto-gifted guitar, golf balls, a framed drawing of the movement, and the original box and papers that catapulted the result by hammering for $364,372. This watch actually made it into the top ten for the entire auction – quite a feat since the other nine top lots were all Rolex and Patek Philippe (yawn!) with a Cartier table clock (surprise!) thrown in for good measure.

GG: Another thing to note out of those total numbers is that while there were a lot of watches in the Picciotto set, the overall sale value, including premium, was right around $1.5 million. That’s not chicken feed, but at the same time by no means was this a Clapton-level mega collection. Phillips was able to drive the buzz to valuation ratio very high, to good effect.

Showmanship counts, and Phillips is good at that

GG: The number one realization for me was that Aurel Bacs and his Phillips team are the masters of event-based marketing of themed watch assortments. Let’s face it: this was a set of mostly low-valued watches (22 of the 41 pieces that sold did so for less than 100,000 HKD each – about $13,000) and were a fairly motley assortment that ranged from Richard Mille and MB&F to Bell & Ross and Snyper with some mainline brand pieces like Panerai thrown in. By promoting the sale as an event, centering it on the outsized personality and collecting passion of Picciotto, and spicing up the group of more modest watches with a few halo pieces, Phillips was able to realize solid – and in many cases quite strong – values for the seller across the range of pieces.

ED: And I’ll admit that I was drawn in by exactly that, Gary: the fact that Phillips and Picciotto made this into an event. I know that saying this is going to be very unpopular, but the current domination of Rolex and Patek Philippe at auction is boring me to tears – so much so that I hardly look at sales dominated by those two brands anymore. The event character and content of this particular auction subset immediately grabbed my attention.

GG: I also think that the pre-auction pricing approach worked well: in my view, the estimate ranges were somewhat conservative, and particularly with Bacs at the rostrum it can be a strong strategy to get the bidding going with a conservative estimate range and then draw the bidders into the show.

Does this auction tell us anything about the market for contemporary watches and/or independent watchmakers?

GG: Frankly, the sale didn’t tell me anything at all about the Dufour/Voutilainen/ Strehler/Gauthier/Halter/Journe et al tier of independents. It did reinforce for me the impression that the bulk of other independent pieces drop pretty quickly into a trading range of pre-owned value, and that it’s hard to break out of that range at the moment unless the piece in question has a cult following. A good example of the latter is the Vianney Halter Goldpfeil piece, lot 967, which went for HKD 162,500, the mid range of its pre-sale estimate. IS: I’m not sure that this sale tells us much about the market for contemporary watches and independent brands − aside from the good news that there is a market − as much as it highlights just how attuned Phillips/Bacs & Russo are to the watch market. The reserve prices were consistently realistic and the decision to auction the collection in Hong Kong rather than Europe was well vindicated.

GG: I think I also learned something about the value of provenance of a certain sort. While I don’t think (with the possible exception of the unique De Bethune with the engraving of Picciotto on a rocket ship) the “owned by Picciotto” label drove values up, I do suspect that for some of the less notable watches the sense that “someone with demonstrably good taste and deep enthusiasm for watches bought this” helped to buoy the bidding; this was more of a portfolio effect than a celebrity one. 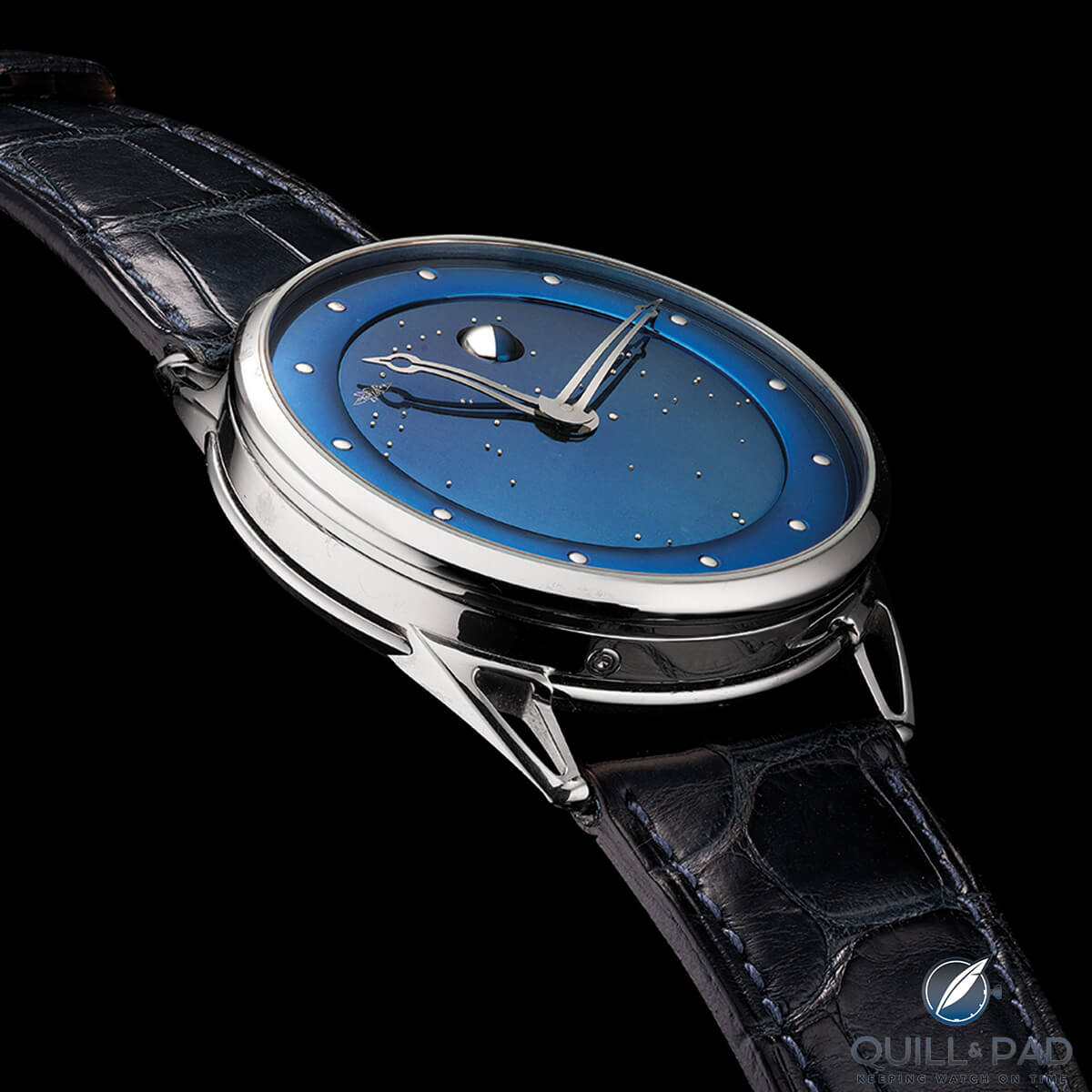 This sale also taught me something about the always-difficult decision to sell some watches to afford others: if you are going to sell some of your independent watches, you might well consider selling most or all of them! A year or so ago I sold one of the two pieces I then owned from one of the leading indies, and he’s still mad at me about it. Perhaps it’s better to sell as a large-scale public celebration as Picciotto did!

GG: While 26 of the 41 watches that sold went above their high estimates, the combination of good event design and execution and judicious estimate setting made the overall outcome less of a shock to me than a natural result may have. ED: And that’s all part of the game, Gary. I was exceptionally pleased to see this auction do well, in particular the Silberstein watches as I have a soft spot for the timepieces made by that creative designer. I still think it’s a pity his brand no longer exists and I am happy to see it continue to be honored this way.

GG: As I’ve said, though, (almost) all boats rose with the tide, with pieces from makers such as Giuliano Mazzuoli, Daniel Strom, Alain Silberstein, and Corum selling well in excess of their high estimates. The Panerai pieces also seemed strong to me, as several non-Picciotto Panerai models in the Phillips Hong Kong offering either failed to sell or went fairly low in their estimate ranges. ED: (laughs) Perhaps it was that crazy patina as evidenced by lot 1005, a bronze PAM 0382. I have to admit my eye was drawn to that green-spotted bronze again and again. This watch, which sold well over its high pre-sale estimate, came with a model boat from a limited Panerai edition of 1,000 pieces.

It was interesting, however, to see which watches landed on the low end of the subset’s sale . . . including the two that didn’t meet their reserves and weren’t sold.

As much as it puzzles me why many of the Richard Mille pieces sell (and re-sell) for the nosebleed-inducing prices that they do, I’m beginning to muse just a bit about why so many collectors – myself included – just don’t get Hublot. I’m not feeling sorry for them, as they seem to be raking in a fortune, but with two of the six Hublot models on offer (lots 1010 and 1011) here failing to sell and one going below its low estimate, Hublot was clearly the laggard on sale day.

IS: I think there were simply too many Hublot models on offer and I was surprised that Picciotto had so many Hublot models in his collection. I’m another who doesn’t get the attraction of Hublot to collectors, Gary (I do get them as everyday watches). I have trouble seeing Hublots holding value over the medium to long term as there are just so many of them available, most virtually indistinguishable except for name. ED: Still, Ian, lot 1011, Hublot Reference 301.C1.8710.NR, a camouflage-styled black Big Bang, was number 0 of only 250 pieces, and lot 1010 was number 1 of 50 pieces (though much more boring in monochrome black). Usually collectors love this kind of extra-special limited edition find. Could this mean that the limited edition craze isn’t really pulling so much anymore?

IS: I’m not sure that collectors have had enough of limited editions as much as they are likely to be fed up with the constant flood of Hublot limited editions, Elizabeth.

The fun part: which watch(es) among these would we have liked to purchase

GG: Perhaps not surprisingly, my eye was drawn to independent watches that I consider to be interestingly made or a bit unusual. The Moser Mayu with the blue fumé dial (lot 1001, sold above high estimate) fit that bill for me as did the Ressence Type One (lot 1020, sold for around high estimate), and the Urwerk White Shark (lot 1028, sold for around high estimate). On the latter, there’s something about that “Urwerk on bracelet” vibe that appeals to me as a great combination for weekend or sport wear, even though others might consider the look somewhat extreme. IS: I have a soft spot for the Urwerk UR-103 TiAN (lot 1027), as it was one of the first Urwerks that really caught my eye. The Jaeger-LeCoultre Marc Newson Atmos (lot 991) was another I’d love to own.

ED: I actually wore that bronze Bell & Ross Skull (lot 997) for an afternoon and it was a lot more comfortable than I thought it would be – in fact it really grew on me. If it had stayed near its low estimate I could have imagined wanting to bid on that one. Naturally, the De Bethune (lot 1022), the Ressence Type One (lot 1020), the Urwerk UR-103 (lot 1027), and the Silberstein Krono Saphir (lot 1016) – which I bid against Picciotto on the first time it went to auction (see My First Auction Purchase: Alain Silberstein Pendant Watch) – constituted other watches I would especially want to wear out of this collection.

GG: The watch that I actually bid on, but did not win, was the Alain Silberstein Krono Saphir: I’ve been keen to own one of Silberstein’s chronographs for years as a “fun” watch, and this limited example (1 of 10 made) sent the interest factor through the roof with its sapphire crystal case.

Had I thought more thoroughly about it, I might have bid on the Roland Iten R8 belt buckle as well (lot 1023)! At the price realized (HKD 81,250/around $10,000) I think the new owner doesn’t have too much of a risk of “getting hurt” financially, and the functionality of the Iten pieces is super cool.