This eleven-day exhibition, as I explained in Bringing Patek Philippe’s Universe To New York City For 11 Days takes place at Cipriani 42nd Street in New York City from July 13 through 23, where visitors can see an extraordinarily comprehensive display of exceptional examples of horology (with one piece even dating all the way back to 1530).

With hundreds of exhibits spread across ten rooms, there is a lot to look at in the exhibition. So I asked Patek Philippe USA president Larry Pettinelli about his favorite piece. The Patek Philippe clock gifted to John F. Kennedy in 1963 symbolizes the famous “hotline” communication system set up between the U.S.A. and the Soviet Union

“That is really hard,” he spontaneously answered. “But perhaps frankly speaking, I love the JFK clock because of the history involved and also because I know how hard everybody worked to actually get that out of the JFK library; to deal with the paperwork to get something out of U.S. archives is intense.”

This timepiece is a quartz desk clock on loan from the John F. Kennedy Presidential Library. It was originally commissioned by German Patek Philippe retailer Heinz Wipperfeld and presented to Kennedy by Mayor Willy Brandt of West Berlin during the American president’s famous visit to the divided city in June 1963 just two months after the Berlin Wall was built. It was at this moment that Kennedy famously uttered the words “Ich bin ein Berliner,” thereby solidifying his place in the hearts of the European country’s residents forever. A close look at the main dial of the Patek Philippe clock gifted to John F. Kennedy in 1963

This clock, which displays the time in Moscow, Washington, D.C., and Berlin, symbolizes the establishment of a direct communication line between these three world-renowned and politically charged cities. It celebrates an agreement made in Geneva on June 20, 1963 called “Memorandum of Understanding Regarding the Establishment of a Direct Communications Line,” otherwise known as the hotline agreement. The Patek Philippe clock gifted to John F. Kennedy in 1963 is on display at the Art of Watches Grand Exhibition in New York city July 13-24, 2017

“Just to give you an idea how difficult this piece has been to maintain: it has to stay within two degrees, plus or minus, of 21° Celsius (70 degrees Fahrenheit) at all times,” Pettinelli continued. “The display case that it’s in has to have immense air conditioning units and airflow and it has to be humidity protected; it can’t rise or fall a certain percentage above and beyond a certain humidity level. There is a sensor in that case that feeds this data back to the John F. Kennedy Presidential Library in Boston so they can monitor the environment.”

The gilt brass, marble, and wood clock designed to resemble a nautical instrument (recalling Kennedy’s own naval service) is located in the exhibition’s U.S. Historic Room, which contains 27 American-related timepieces on loan from other institutions. “So from that standpoint alone, it’s a magnificent feat to get this,” Pettinelli added.

John F. Kennedy would have been 100 years old this year, a fact that aided Patek Philippe USA in convincing the library in Kennedy’s hometown to loan it out for this majestic exhibition.

“They said, ‘We’re going to do some centennial celebrations around the country so this would be a good way to kind of kick it off’,” Pettinelli continued. “So that’s maybe why I’m a little biased. But that clock has a rich history as the ‘Ich bin ein Berliner’ clock from Berlin. I was born in December 1963, so Kennedy was assassinated one month before I was born. But the way that my parents’ generation talked about JFK, there was just such love for what he was trying to do for the country. Maybe I’m romanticizing a little but it’s kind of a nice feeling when you think about all the things he was trying to do for the entire country.” 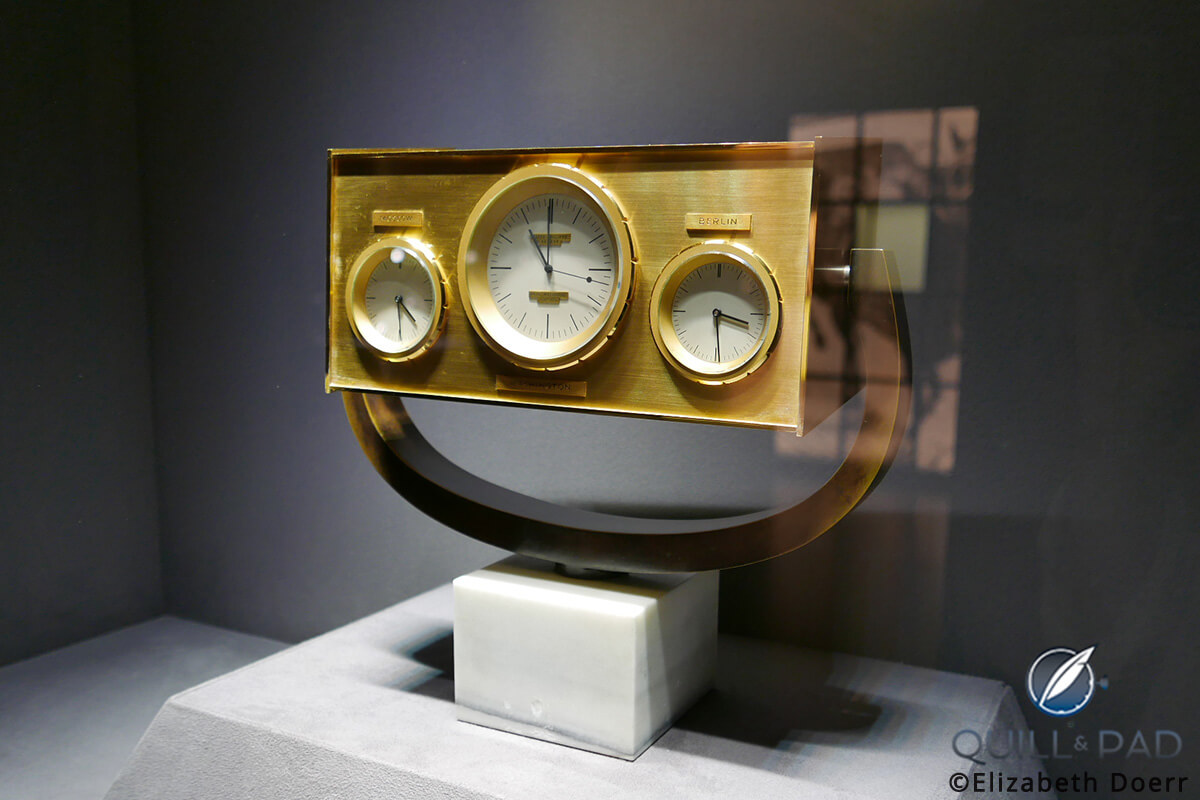 The Patek Philippe clock gifted to John F. Kennedy in 1963

The JFK clock was not initially attributed as by Patek Philippe as the John F. Kennedy Presidential Library had filed it under “Wipperfeld.” Only when Christie’s international head of watches John Reardon was researching his book Patek Philippe in America, Marketing the World’s Foremost Watch in 2008 was it found again as he was looking for clocks for the book’s chapter six, “1960s: The Electronic Revolution.”

The last time the JFK clock was on public exhibition was in New York at the World’s Fair in 1964 thanks to Jacqueline Kennedy Onassis loaning it to Patek Philippe for the occasion.

Reardon explained to me that this battery-driven clock was technically way ahead of its time as it was derived from the world’s first autonomous quartz clock, which was a precursor to the famous BETA 21 quartz wristwatch movement.

“We hope that it captures people who are just raw historians to want to come and see something of such importance. Especially in the political environment now, everybody is tuning into what’s happening in politics, so maybe we just get people who are looking at the raw history involved with that clock.”

The prototype of this clock resides in the Patek Philippe Museum in Geneva. “So I know what it looks like,” Pettinelli laughed. “This is about the history of Henry Stern and Patek Philippe and the United States as well. We’re excited.” The Patek Philippe clock gifted to John F. Kennedy in 1963 is on display at the Art of Watches Grand Exhibition in New York city July 13-24, 2017

The U.S. Historic Room offers insights into the prestigious brand’s most renowned U.S. patrons and their passion for watchmaking. In other words, this exhibit puts the evolution of Patek Philippe as it relates to the United States into context. Highlights of this room include 11 incredibly complicated timepieces owned by Henry Graves and James Ward Packard: six from Graves that are usually exhibited in Patek Philippe’s Geneva museum (including a minute repeater grande sonnerie perpetual calendar from 1928) and five from Packard, including the famous “The Packard” (for more on these two, the oeuvres, and the duo’s competitive collecting see The Patek Philippe Sky Moon Tourbillon Earns A Place In Horological History).

You might also enjoy Quite Possibly The Largest Curated Assembly Of Vintage Patek Philippe Watches For Sale In History At Christie’s New York: It‘s An 11-Day Sale, But Don’t Dally!