The criticism basically boiled down to the fact that the global TV audience watching the 2017 America’s Cup wasn’t as high as it once was, so what was the point of all of these expensive sponsorships? Armin Strom taking to the high seas in Mallorca

I had the good fortune to be invited by Armin Strom to Palma de Mallorca, capital city of Mallorca, a large Spanish island in the Mediterranean, to experience high-speed foil sailing with the brand-sponsored GC32 sailing team. 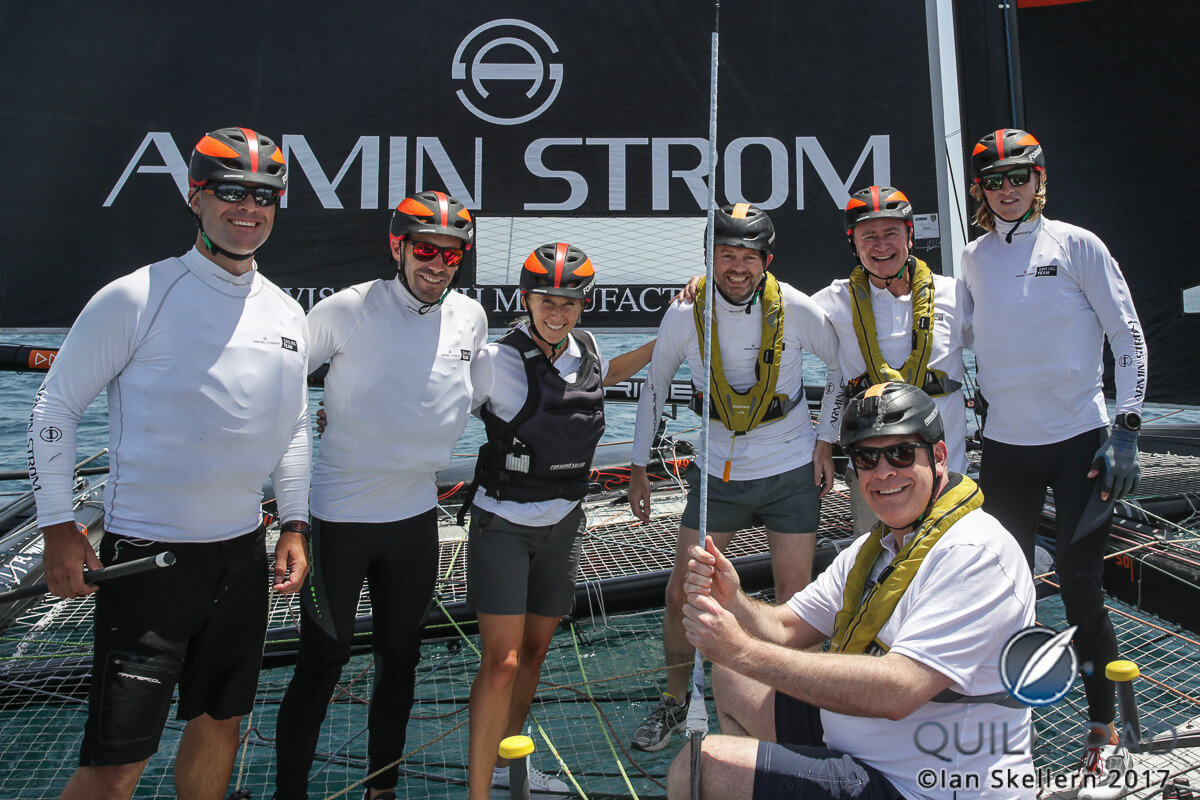 Not only did I learn just how exciting and addictive foiling a racing catamaran is, the packed marina in Palma de Mallorca highlighted just why sponsoring a sailing team makes financial and marketing sense for the right type of high-end watch brand. But first the sailing. We had an inkling into how relaxing a trip around the bay of a GC32 was likely to be when the first two pieces of equipment we were given were a hard helmet and an impact vest.

Armin Strom owner Serge Michel is a keen sailor and has known Swiss skipper Flavio Marazzi for many years. So when Marazzi decided to put an all-Olympic team of sailors together to compete in the GC32 one-design class of foiling catamarans, Michel was happy for Armin Strom to be the principle sponsor. Armin Strom Skeleton on the wrist

Unless you are a sailing fan and follow international regattas closely, it’s unlikely you will have even heard of GC32 catamarans, let alone the GC32 Racing Tour (or even seen it on television). So you may well be thinking, as did many after the America’s Cup, what’s the point? To answer that question, you only have to look at the marina in any major sailing venue. Even the most cursory of glances is likely to take in a plethora of yachts worth hundreds of millions of dollars. In fact, there are so many ultra-expensive yachts that a $1 million boat is unlikely to even turn heads. Yachts in the marina at Palma de Mallorca

When your brand name is plastered over a towering sail as you head from the marina to the race course, the sponsor doesn’t need a worldwide television audience as there is a large targeted audience of high-net-worth potential customers sitting comfortably dockside with a front-row seat. The GC32 foiling catamaran is a one-design racing class designed to provide exciting sailing at a relatively affordable price (compared to America’s Cup class AC72 catamarans anyway!). The boat is ten meters long (including bowsprit) by six meters wide, with large foils that enable the yacht to lift out of the water at relatively low speeds.

A GC32 can easily hit 30 knots (55 kph) and reach a top speed of 40 knots (75 kph). Flying at seemingly impossible speeds a meter above the water with spray in your face and constant trimming needed to avoid planting the nose is in a word exhilarating. Armin Strom Skeleton on the wrist

We also had the opportunity to wear a variety of Armin Strom models, including the groundbreaking Mirrored Force Resonance, and learn more about the Configurator, which makes customizing a watch as simple and transparent as possible (see Watch Modding By The Brand: Quill & Pad Team Members Play With The Armin Strom Watch Configurator And Share Their Results). For more information on the sailing team, please visit www.arminstromsailing.ch.