Sometimes a well-placed appearance can shine a different light on a product (see What’s The Deal With Celebrity Brand Ambassadors? Are They Really A Good Fit For Watch Brands?).

That also goes for watches and for cars. For example, when it became known that John Lennon passed his driver’s exam in 1965, London’s luxury car dealers immediately dispatched their most magnificent offerings toward his home in Weybridge, Surrey. He would ultimately buy an Azzuro blue Ferrari 330GT.

Audi has also had its string of celebrity owners: Princess Diana to name just one prominent example.

But Audi has also hit it big in the movies. Car enthusiasts still have fond memories of the Audi S8 that dominated the scenes of the movie Ronin, and in more recent years the R8 that was the preferred car of Tony Stark (played by watch enthusiast Robert Downey, Jr.) in the Marvel movie series Iron Man and Avengers.

Even after all these years, I still debate which R8 looks best: the coupe or the Spyder. The coupe has the signature side blades that set the car apart from pretty much anything else on the road today.

However, the Spyder with the top down has a more organic design and is better composed, though it also has slightly less exotic lines. The 2018 Audi R8 Spyder V10 Plus might have settled this dilemma in its favor because with the top down, you can hear the engine much better! In fact, the engine might very well be the reason to purchase the Audi R8 Spyder V10 Plus in the first place.

It is somewhat of a surprise that today we can still find a 5.2-liter V10 engine in the R8 Spyder, even more so because it is a naturally aspired engine. The latter only increases the fun and should be enjoyed while it lasts. Where we see the “regular” Spyder V10 as somewhat of a GT, you won’t make that mistake with the Plus. No, it is not an extremely difficult car to drive, in part thanks to its four-wheel drive and excellent seven-speed double clutch automatic gearbox, but things get fast in this car pretty quickly! On top of the already generous specifications of the R8 Spyder V10, the Plus adds 70 horsepower for a total of 610 hp. That is enough power to take you from 0-60 mph in 3.3 seconds and provide a top speed that breaks through the magical 200 mile-per-hour threshold. It is a car that makes you wonder why people would even consider buying a Lamborghini – Audi’s sister brand in the Volkswagen group – especially since the R8 Spyder V10 Plus comes in a micrommata green paint color exclusive to the model (that admittedly does feel like it could have been taken straight out of the Raging Bull’s warehouse). 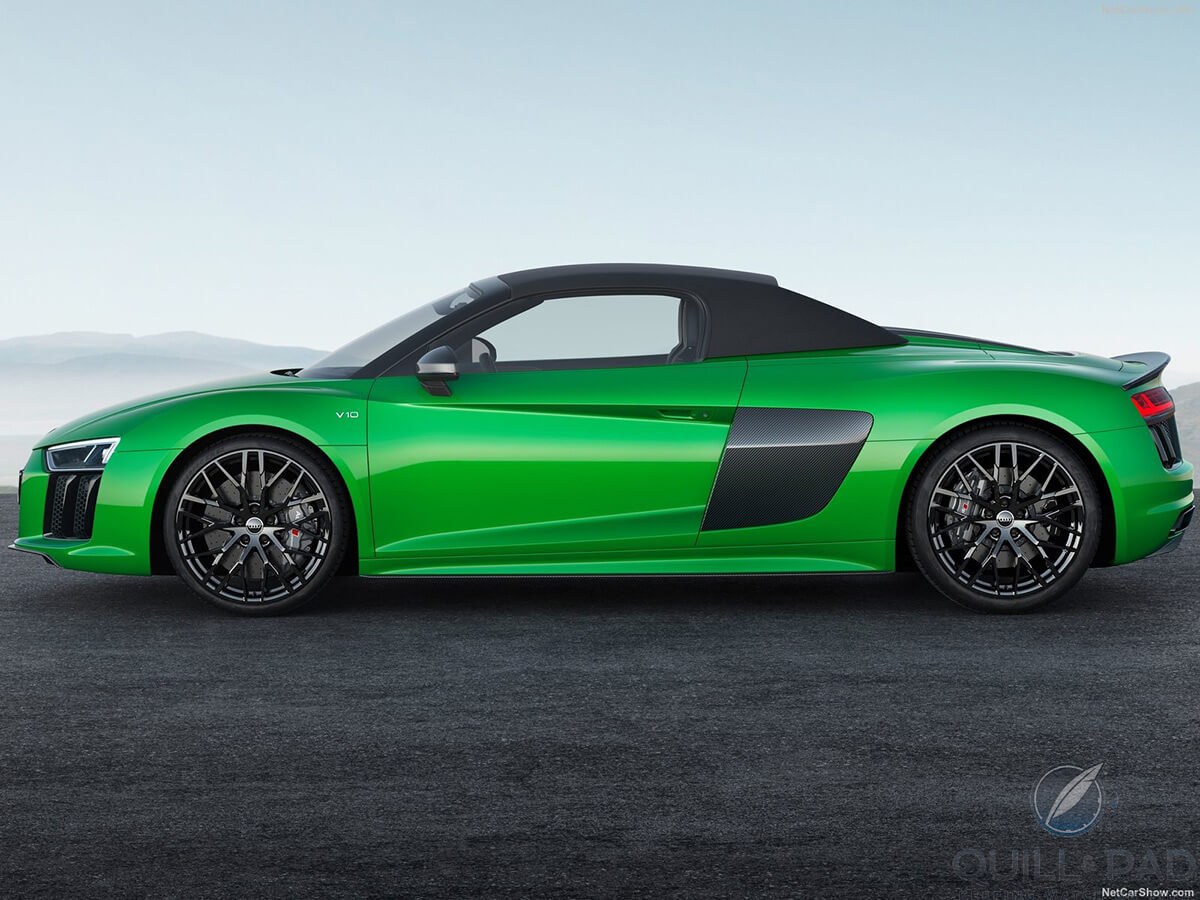 If green is not your color, no need to worry as Audi also offers the R8 Spyder V10 Plus in eleven other paint colors as well as the choice of three different colors for the convertible top and no less than five for the side blades. I am curious what colors Tony Stark will choose for his R8 Spyder Plus in the next Iron Man movie!