The origins of life are one of the greatest mysteries in the universe.

As probable as it is improbable, the mechanism of life has been probed, tested, queried, theorized, and pondered for thousands of years. It seems that the likelihood of fully understanding the origins of life in the universe may be beyond our grasp, at least until the day we reach beyond our own planet or even the solar system in search of anyone (or anything) else in the vastness of space.

There are clues that perhaps we aren’t so unique and special, pointers to the possibility of life elsewhere.

One clue is a crucial little compound known as amino acids. These organic compounds are quite literally essential to the existence of all life we know as biochemical reactions are made possible by their existence. As part of the basic mechanism of life as we understand it today, wherever the existence of these compounds is discovered outside of earth we may find evidence to help us decipher the origins of life on our own planet.

Cue meteorites, which are in essence the aftermath of streaks of light across the sky at night. Meteorites are the remnants of meteors that hit the ground, while meteors are the burning pieces of a meteoroid after it has entered earth’s atmosphere.

Out of the tens of thousands of pounds of meteorites that reach the ground every year, a small portion, somewhere around five percent, is carbonaceous chondrite, stony non-metallic meteorite featuring organic compounds including – you guessed it – amino acids.

The presence of non-terrestrial amino acids in meteorites is a major reason that leading theories for the origin of life on earth starts elsewhere in the solar system (or the galaxy for that matter).

Since life is largely made up of the four most chemically active elements in the universe (hydrogen, oxygen, carbon, and nitrogen), the key elements in amino acids are the same. And as amino acids are found distributed inside meteorites that come from the wider solar system and galaxy, it seems likely that life technically got its start “out there.”

Of course, the origins of life still remain a mystery and will so for quite some time, barring any sudden grand discovery or revelation about the universe. But as more evidence rains down from the heavens and amino acids are found in numerous places in the solar system, the people of earth have a direction to focus on when asking THE question: “Where did we come from?” Where did we come from? A Space Mystery by Louis Moinet

Helping to explore the enigma, Louis Moinet includes a piece of the cosmos in a timepiece appropriately called Space Mystery. Featuring a new invention christened the “satellite tourbillon,” Space Mystery also boasts fragments of meteorites from the moon, Mars, and a fragment from an amino acid containing carbonaceous chondrite meteorite whose origins may go back further than the creation of our solar system.

The Louis Moinet Space Mystery represents the ultimate question of our origins with the inclusion of a meteorite fragment that could have the ability to shed some light on where life may have begun. The fragments used are tiny, but the implications are huge: could this watch hold evidence for the creation of life? It is the mystery of the origin of life that Space Mystery is named for, and this space nerd is definitely intrigued by the possibilities.

Louis Moinet already has a history of including interesting stones, meteorites, and fossils in its watches, so it comes as no surprise that another incredible artifact with possible ties to the creation of the solar system has made its way into a new limited edition series.

But Louis Moinet didn’t stop there; the movement behind the watch is the real star (sorry, little meteorite buddy) with a world-first satellite tourbillon. It goes hand in hand with the celestial theme but takes a much more active route than a special material. The satellite tourbillon is constructed on a similar principle to the basic tourbillon, but with its axis offset from that of the balance instead of concentric.

To counteract the cantilevered assembly, an arched section extends from the bridge opposite the pivot to support a small textured planet that balances the tourbillon. The small planet and the balance act as satellites to each other, orbiting a shared center. The entire satellite tourbillon assembly hovers 1.8 mm above the dial surface to emphasize the motion of the “satellites,” and this also highlights the blued titanium tourbillon bridge shining out from the silver opening. A close look dial side of the Louis Moinet Space Mystery

The hours and minutes are displayed on the small dial at 6 o’clock, which is crafted in transparent sapphire crystal, providing a great view into the clean movement behind.

The rest of the dial is where another mystery comes into play: the hand-engraved dial plate is coated with what Louis Moinet calls “Magic Blue.” That’s really all we get to know as Louis Moinet isn’t saying exactly what the vibrant translucent blue material is. As a details guy, keeping that secret just intrigues me more, though it doesn’t detract from the enjoyment of the display. A lesson in contrasts

At 9 o’clock we find the small fragment of the carbonaceous chondrite meteorite shaped into a dark crescent representing the darkness of space behind the golden moon. This isn’t a moon phase indication, simply an artistic rendering of the moon using the meteorite fragment for dramatic effect beside it. On the opposite side of the dial are two small spheres half sunk into the Magic Blue representing more planets to continue the theme. That style also continues throughout the entire case, which can be extensively and exquisitely hand-engraved should the client so desire. There are four limited editions of eight pieces, 16 engraved and 16 left smooth. The case comprises four individual components (bezel, case band, case back, and crown seat), much of which is intricately hand–engraved on the engraved version. The two meteorite fragments from the moon and Mars are embedded in the case band near the crown. All of this decoration and detail sharply contrasts with the rear of the case. The movement, visible underneath a sapphire crystal case back, is very clean, modern, and tidy. Even though it features a flying satellite tourbillon and off-center hours and minutes, the layout is pretty minimal with a large cutout down the center of the movement, simple skeletonized bridges and wheels, and top-notch finishing. 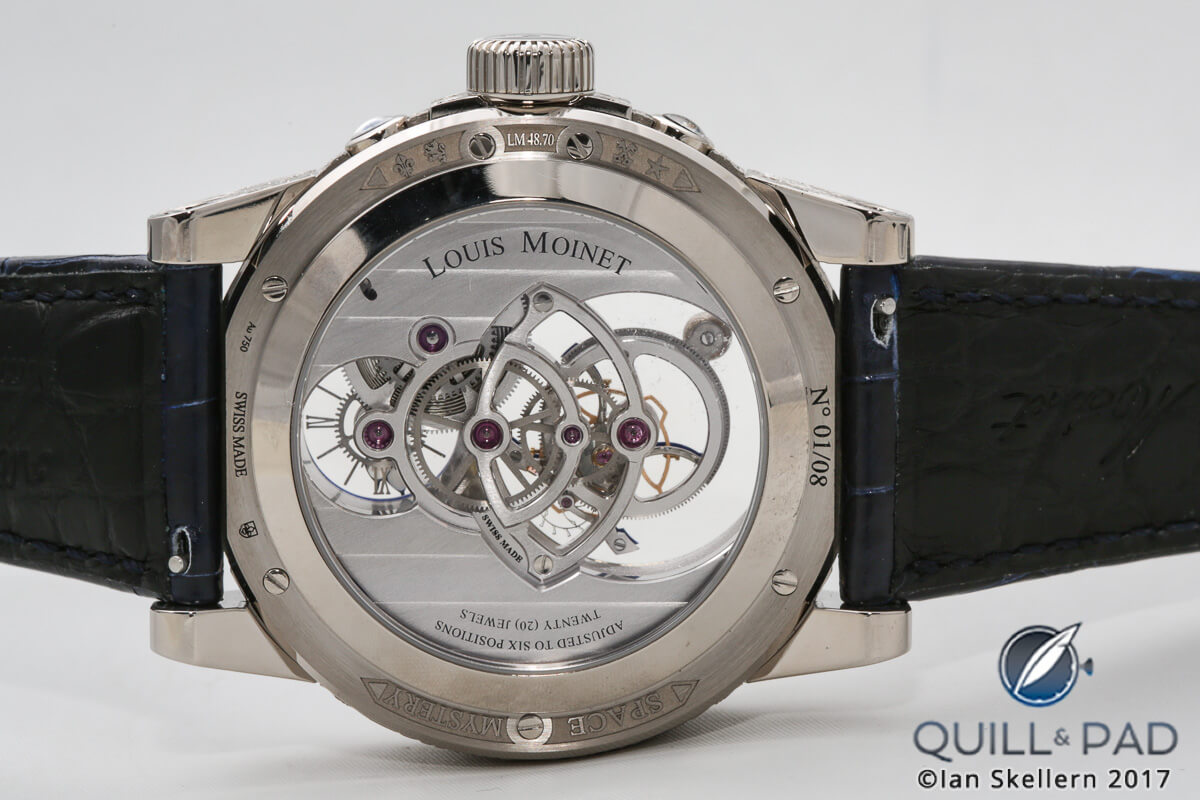 The details of the finishing don’t overpower the movement and its geometry, though, like some brands’ movements tend to do when they haven’t put time in to design the actual shape of the components. The LM48 caliber developed with TEC Ebauches is a real stunner – and a bit surprising given the extremely stylized nature of this watch. Sometimes, this is a great strategy to create and maintain visual interest every time you pick up the watch because the variation from one side to the other triggers your brain to pay attention, increasing satisfaction and reducing the likelihood of familiarity boredom. The Space Mystery has a lot going for it and from many avenues. Space nerds, horology connoisseurs, movement geeks, and even rock hounds can all find things to get excited about with this watch. The high amount of detail and texture may not compete with super minimalist pieces, but if bold adventure is what you are after, then the Space Mystery has you covered. My only complaint is not knowing what Magic Blue is exactly because I love hearing about new techniques, especially when it comes to finishing and coating technology.

Oh well, I guess I have more than enough to look at and experience while I wait for Louis Moinet to whisper some finishing secrets into my ear.

But first I need to learn all I can about amino acids and the carbonaceous meteorites they can be found in and keep my eye out for one if I am ever exploring.

Until then, how about that breakdown!