Sotheby’s To Auction Four Timepieces By George Daniels, Including The $2.13 Million Space Traveller (Updated With Results)

On September 19, 2017 Sotheby’s London will hold its latest “Fine Timepieces” sale. What sets this one apart from the others is the astounding inclusion of four timepieces created by George Daniels.

Not since Sotheby’s auction house undertook what was to my mind the most high-profile auction of 2012, have so many Daniels pieces been sold at one time. That auction five years ago, following the great watchmaker’s death, sold the horological remains of Daniels’s life embodied in 137 precious items. Daniels’s 37 unique pocket watches are one-of-a-kind in their nature because they were manufactured by his own two hands and because each one represented a new technical experiment. Aside from a number of those, the 2012 auction also contained high-end vintage timepieces and other memorabilia that Daniels owned and timepieces he made.

The majority of the proceeds of the auctions surrounding Daniels’s objects went to benefit the George Daniels Educational Trust, a charity he set up before his passing to benefit the higher education of pupils studying the disciplines of horology, engineering, medicine and building construction. Financial aid from the trust is granted to students nominated by City University London and, jointly, the Worshipful Company of Clockmakers and the British Horological Institute.

That auction ended up taking in £8,285,139 after commission, beating the pre-sale estimate by more than £3 million. About £8 million of that went to the George Daniels Educational Trust.

Three of the items now for sale in this upcoming auction are from Daniels’s personal collection and were previously sold in that 2012 auction. The fourth, one of 1999’s Millennium wristwatch series, is a rare treat for the collector with discerning taste.

Lot 121 is expected to be the top lot at the auction: the Space Travellers’ Watch, which went in the original 2012 sale for £1.33 million/$2.13 million, the most expensive George Daniels piece ever sold. Daniels once described this watch, which is named in honor of the American moon landing in 1969, in this way: “When you are on your package tour to Mars, you need a watch like this.” And indeed it is an extraordinary piece of horology. Made around 1982, it is one of two Space Travellers in existence: the first was made to be sold (to a collector in Germany) while the second remained with Daniels, who wore it often.

The Thomas Mercer Marine Chronometer (lot 119) offered in this auction represents Daniels’s first horological exercise during his time as a trade repairer in 1952.

Daniels bought the clock ébauche from Thomas Mercer, but made the escapement and finished the chronometer; his signature on the dial reflects this. 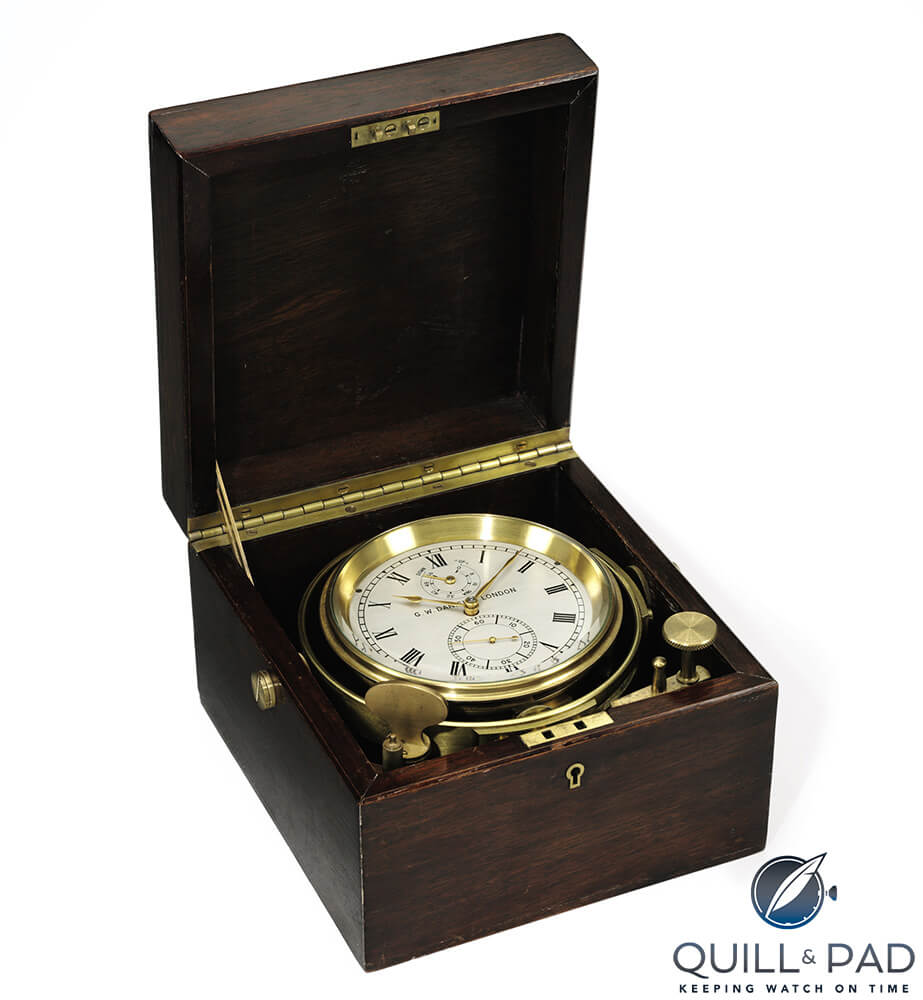 Housed in a mahogany box and gimbaled in place, it is outfitted with a fusée movement, a bimetallic balance, and a helical spring as well as Thomas Earnshaw’s spring detent escapement.

This clock, which sat for many years in Daniels’ Isle of Man home Riversdale in a place of pride, right on the mantel in the drawing room, has an interesting back story. Daniels was the London agent for Breguet in 1967. Upon visiting the brand’s Paris workshop, he spied a weight-driven three-wheel skeleton clock and asked for permission to measure and replicate it. When George Brown (who had taken over leadership of Breguet after Henry Brown passed away; the Browns took over from the Abraham Louis-Breguet’s great-grandson in 1882) later visited Daniels’ London workshop and saw it, he was so impressed that he suggested giving it an official certificate, making it a genuine Breguet clock. The agreement included Breguet receiving the profit from the clock it would have received had the brand sold it itself, a practice that Abraham-Louis Breguet also engaged in.

A second one was made and sold, but Daniels retained this one made in 1968. It displays the equation of time and an annual calendar in addition to the time. At 66 centimeters in height, it rests on a marble plinth and comes with a glass cover.

In 1999, acceding to the wishes of some of Daniels’s own friends and clients to own a timepiece signed by him, Daniels created the 37 mm Millennium wristwatch: this was a series of 50 pieces based on an Omega ébauche containing the Omega-produced, extra-flat, co-axial escapement that Daniels invented. Daniels knew that he would need help to complete this series, and Roger Smith – the only “apprentice” Daniels ever took – was the obvious choice. These pieces have occasionally shown up at auction, and Sotheby’s set its own record for the sale of one at its April 2017 auction when a white gold model sold for £187,500 including buyer’s premium. Only seven of the 50 were made in white gold. Previous to that, Sotheby’s had only sold any in the 2012 sale of Daniels’s belongings, when four went to the block: a prototype, two yellow gold versions, and one white gold model. At that time the white gold model went for £145,250.