The Big Winners Of The Eve’s Watch Awards 2017

On a sunny Thursday morning in London, about 100 (male and female) figures from Great Britain’s watch industry came together to celebrate watches, brands, and one woman for excellence in 2017.

Held this year at the exclusive Morton’s Club in Mayfair, 2017 was the second edition of the Eve’s Watch Awards, which was created by women and judged by women. It exclusively focuses on women’s watches.

As I previously wrote in It’s Time To Take Women, Their Watches, And Their Opinions Seriously In The World Of Horology, women are fast becoming, if not already, a significant consumer group for high-end watches. In fact, the fairer sex represents perhaps the largest as-yet-untapped group of serious consumers in the watch industry.

And this in itself makes an award bringing more of a spotlight to these timekeepers a great idea. The inaugural Eve’s Watch Awards in 2016 did a great job in shining a spotlight on the female wrist, and the second edition of this initiative shines even brighter. So let’s look at the people and watches honored on November 2, 2017.

Woman of the Year: Aurélie Picaud, director of Fabergé Timepieces

Fabergé Timepieces director Aurélie Picaud is the 2017 Eve’s Watch Woman of the Year. Picaud, formerly product manager at Audemars Piguet, was specifically recruited by Fabergé’s then-new CEO Sean Gilbertson in 2014. Once arrived at the brand’s London headquarters, she was told she had only 18 months to get a good collection together in time for Baselworld 2015. This was the collection that debuted Fabergé’s new collaboration with Agenhor as a workmaster, including the 2015 Grand Prix d’Horlogerie de Genève-winning Lady Compliquée Peacock (Ladies High-Mech). The duo repeated the success in 2016 with the Visionnaire DTZ in the Travel Time category. “It was so good to win for a man’s watch,” Picaud told Eve’s Watch. “People have this idea that women can only create women’s watches, and sometimes I feel I have to do things better because I’m a woman.”

Picaud’s recognition was for the powerhouse way she has gone about bringing great watchmaking to Fabergé while moving within the limits of the brand’s classic traditions. These include, of course, jewelry watches such as the Lady Libertine I, II, and III – the latter a collaborative timepiece with two other ultra-creative females in the best tradition of this historical brand (see Fabergé’s Lady Libertine III Created By Three Exceptional Women).

Let’s take a quick look at the other winners now.

A precious miniature garden for the wrist, the Dior Grand Soir Botanic so mightily impressed the judging panel with its artistry that it was practically unanimously offered the title. A fun fact is that this watch with its many carats’ worth of gemstones and white gold case is attached to the wrist by a strap made from the same fabric that Dior uses for its Fusion sneakers.

The camellia has figured prominently in Chanel’s designs since the 1920s as embroidery, embellishment, or in the shape of an accessory. Today it is found on wallets, sunglasses, pouches, and jewelry. And in watches – and I do mean in the case of the new Première Camellia Skeleton as an integral part of the watch: its movement. The Première Camélia Skeleton has an awesome surprise for women interested in mechanics: a brand-new manufacture caliber, which has been designed so that its bridges form the petals of the famous flower so dear to Coco. What better way for the brand to celebrate 30 years of its Première line! While the Urwerk UR-106 Flower Power is simpler than it might seem at first glance, with its rotating displays driven by Geneva crosses it is wholly unlike any other purpose-built ladies’ watch in the world. And the size, shape, and choice of diamond placement is excellent, not overwhelming like many diamond-set pieces can be, which is a huge bonus for women serious about their watches. Urwerk UR-106 Flower Power on the wrist

In addition, the uniqueness of the UR-106 base gives anyone wearing this an instant boost of horological street cred, though I do wonder how many other women think about that aside from me . . .

Further reading: Our Predictions For The Ladies Category Of The 2017 Grand Prix d’Horlogerie de Genève

There has clearly been a trend-oriented appetite for for pink gold, sporty, bracelet watches in the ladies segment for a while; this is actually the main driver behind Tudor hiring Lady Gaga as a new brand ambassador (see Lady Gaga Joins Tudor Ambassador Ranks Wearing Vintage-Styled Tool Watch In A Clash Of Style). 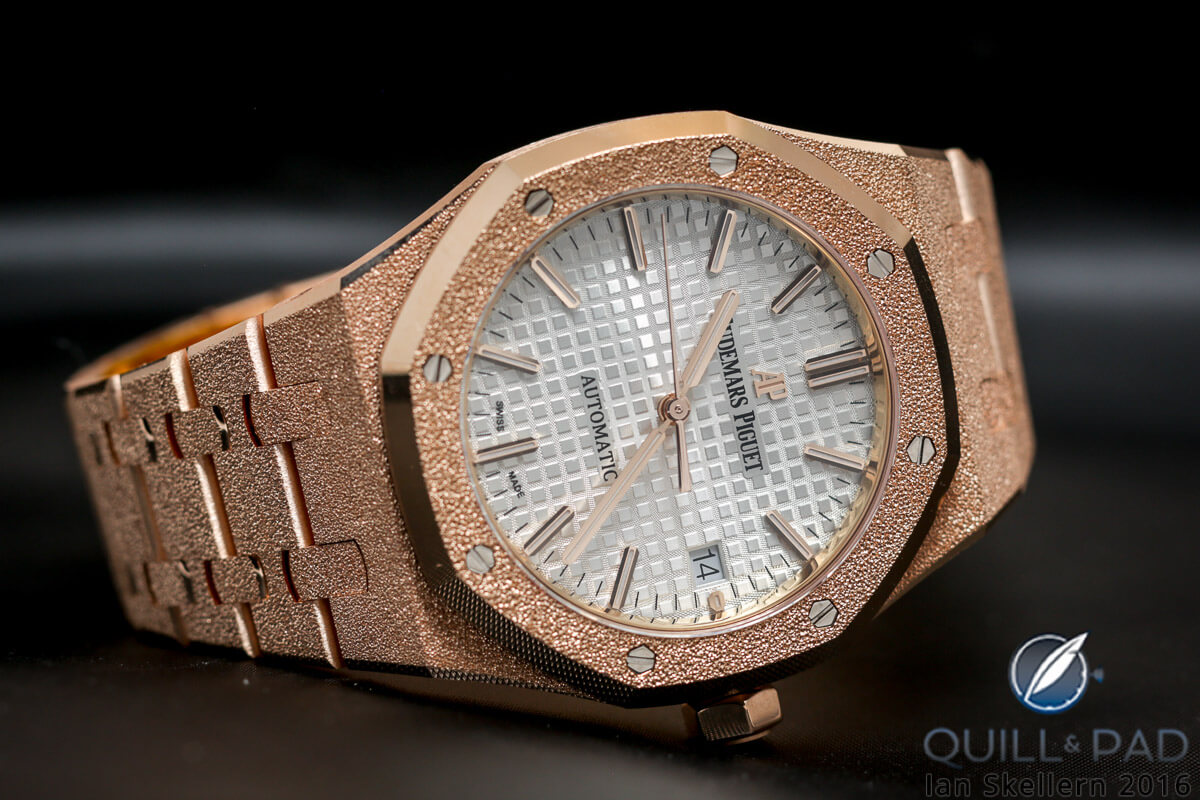 The main feature of the Audemars Piguet Royal Oak Frosted Gold is that the unisex 37 mm pink gold case has been given a lovely hammered “frosting” that provides a visual sensation close to that of the sparkle of diamonds without being diamonds: this is a gentle frost on the grass as opposed to a full blanket of ice.

The watch hits the sweet spot between haute and everyday; it’s got a sporty edge, but that does not come at the expense of superfluous complication. And it still looks masculine enough to be the “boyfriend watch” that it just isn’t. It is a ravishing self-purchase.

Further reading: Our Predictions For The Ladies Category Of The 2017 Grand Prix d’Horlogerie de Genève

As our Nola Martin said of the Rolex Yacht-Master II (Tutti Frutti) in our annual round table discussion of Baselworld 2017, “I am drawn to the brilliant bezel decked out with 32 colorful sapphires, eight tsavorites, and one diamond on an actual sports timepiece.” There are certainly many women not attracted to this combination, but it is more likely that there are many more who are. And as this is a Rolex, it is a very collectible watch and likely to remain as such for decades to come.

Brand of the year (luxury): Chanel

Brand of the year (fashion): Gucci

Find the full list of winners on the Eve’s Watch site and/or download your own digital copy of the latest Eve’s Watch magazine featuring everything about the awards and more.