Athletic sports at the highest levels are rather extreme endeavors.

With the modern meshing of engineering, sports medicine, and elite training, today’s athletes are blurring the boundaries of what was thought possible for human beings to achieve. People can run faster, jump higher, and throw farther than ever imagined.

These advances have also taken a toll on athletes, with minor injuries being almost guaranteed and severe injuries becoming so common as to be dismissed as “part of the sport.” In some sports this has come along with massive changes to the game, and in others it shines a spotlight on just how brutal athletics can be.

Now, imagine taking an activity almost guaranteed to injure you and toss in a bunch of two-meter-long, thousand-kilo animals that everyone has to ride while swinging long, hard, wooden mallets. Polo: what could possibly go wrong?

One of only a few sports that involve animals, polo might just be one of the most dangerous “gentlemen” sports around. The solid balls regularly fly at 170 kph, set into motion by long wooden mallets, while players are routinely crushed between their own horses and the opponents’ horses galloping at speeds up to 30 kph.

Needless to say, many, many impacts occur during a match, and a broken bone, smashed wrist, or bloody face would never look out of place as a result.

I strongly recommend you watch this video of an interview with ten-goal Argentinian Pablo Mac Donough in which he describes his life in polo (and some of his injuries). Just how good is Mac Donough? Here’s a short paragraph from his Wikipedia entry: “Since 2011 Mac Donough plays for La Dolfina, winning four out of the last five editions of the most prestigious polo tournament in the world, the Argentine Open. As well with this team, they have won three consecutive Triple Crowns (Tortugas Open, Hurlingham Open, and Argentine Open) 2013-2014-2015 making La Dolfina the only team in polo history to achieve it.

Sure, American football, rugby, and especially hockey can be rather violent sports, with injuries often occurring. But that is expected when people run (or skate) flat-out, head-on into each other. It isn’t the first thing most people unfamiliar with polo think of when imagining people trotting around on horseback with white hats and leather boots.

Clearly, for the uninitiated (that’s me), there was something very seriously missing.

When I imagined watch brands creating watches to be used in polo matches, I figured it was similar to any sports-oriented watch: it would be light, somewhat shock resistant, and maybe even made of high-tech materials.

And so when Richard Mille announced its second polo-oriented wristwatch I was in for a huge lesson on the brutality of a sport invented more than 2,500 years ago by the Persians (you know, the guys that beat the tough-as-nails Spartans).

The new Richard Mille RM 53-01 Pablo Mac Donough is a timepiece that even the warrior Persians would have appreciated. If I haven’t made it clear enough already, let me repeat: polo can be a brutal sport.

Injuries are common, and massive blows are a real possibility. So creating a watch that can be worn during a game is no small feat. The original polo watch, the Jaeger-LeCoultre Reverso, had a reversible case that simply hid everything behind a plate of metal.

While cool it was pretty rudimentary, and so when Richard Mille set out to make a watch to withstand the violence of a polo match, the direction was more than a little different.

The first model in 2012 went with a domed shell of titanium carbide with a merged pair of portholes to display the time and peek into the movement. The RM 053 was part tank, part haute horology – and it proved a rather successful design.

The RM 053 that Mac Donough has been wearing looks like it’s been through battle, but still works as well as when it was new.

Leaving well enough alone is not the motto at Richard Mille, and so a new-and-improved watch for Mac Donough would have to be not only more resilient, but also more visually interesting. This meant that seeing the entire movement was a requirement, and that provided more than a few hurdles for the research and development teams at Richard Mille.

The problem was approached in three main ways: case, crystal, and movement suspension.

The case is actually the most familiar part of the watch, largely because it uses the already well-vetted TPT Carbon that Richard Mille developed and launched in 2013.

To recap, NTPT Carbon is an ultra-thin carbon fiber layup that, instead of weaving different directions in the same layer, uses 30-micron-thin oriented strand layers that are rotated 45 degrees to the adjacent layer. The layup is then compressed with resin under six bars of pressure at 120 degrees Celsius, creating a very fine structure that is 25 percent more resistant to breaking stresses and three times less likely to form micro cracks and delamination.

As the basis for an ultra-light, ultra-shock-resistant watch, you could do far worse than TPT Carbon, but the outside case is just the beginning for the RM 53-01.

Inside, the movement is something out of industrial engineering handbooks.

Based on the movement first utilized in 2013 in the RM 27-01, the RM 53-01 sees a complex system of micro cables supporting the titanium movement architecture in six locations with multiple planes of tension. 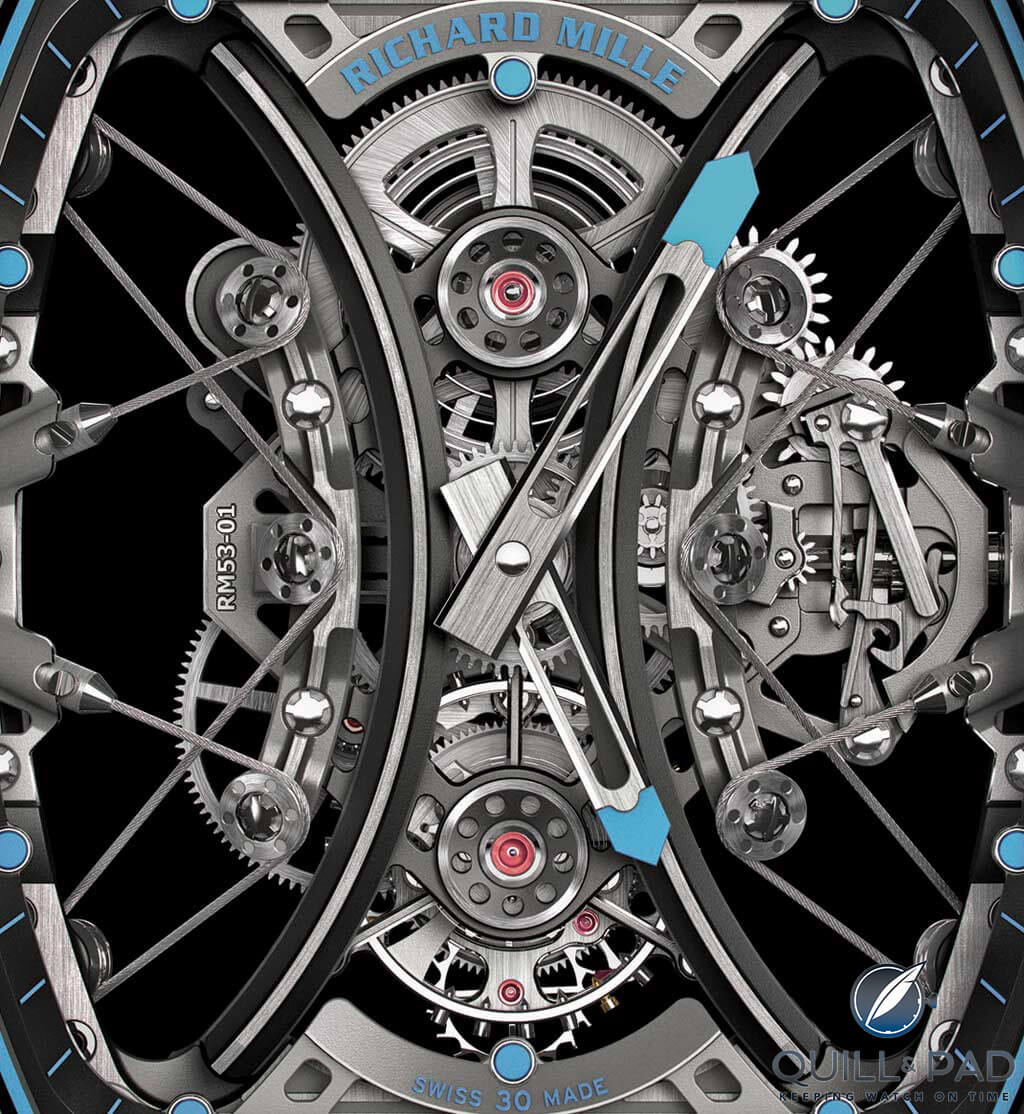 Changing the direction of tension to different planes helps even out the forces on the movement (you wouldn’t want it twisting) and also helps protect against shock in multiple directions. No matter which direction a force comes from, there are always at least two different directions of tension to resist the shock and distribute the force away from the centrally mounted tourbillon.

This is nearly always the goal with the extreme watches Richard Mille produces: to incorporate the delicate tourbillon and show that it can also be engineered to be tough.

This specific tourbillon shows the traces of said engineering with the upper and lower bridges being incorporated directly into the main frame structure, which is already a pair of titanium arches for structural stability. The tourbillon is mounted into a very large jewel support that has been drilled to distribute forces away from the pivot and for reduced mass. Nothing about the movement looks delicate even if it is skeletonized for weight reduction and seemingly floats in the middle of the case. The engineering behind the movement took more than two years, finally creating something that civil engineers might gaze longingly at.

But the final problem for the development of the RM 53-01 was that the original polo watch hid all the amazing mechanics underneath a titanium carbide shell, thus turning it into a watch that had more in common with the original polo-oriented watches than it ought to. So the goal was to create a watch that allows us to see the entire movement while it is still protected from extreme shocks. Of course this is no easy feat, so the engineers looked to automotive engineering for the answer. Laminated glass windscreens were invented very early in the twentieth century, becoming standard after the development of polyvinyl butyral, which allowed for crystal-clear windscreens that couldn’t shatter, splinter, or discolor.

The idea consists of two (or more) layers of glass bonded together with a layer of clear plastic in the middle. The plastic keeps the glass from shattering and, in many cases, creates a much stronger structure than a similarly thick piece of single-pane glass. Lamination really can work wonders, so the Richard Mille team went to work creating a similar system with two layers of sapphire glass and an intermediate vinyl layer.

But of course it wasn’t just that easy. The research began with flat sheets of sapphire; though they switched to the curved sapphire that would be needed for the case.  The process called for adding the anti-reflective coating to the sapphire disks after being polished but before combining with the vinyl layer. Once the lamination was complete, then another 16 hours of machining needed to take place to obtain the final shape.

You may not have realized it, but anti-reflective coating is usually the last thing applied to watch crystals – and for good reason. Any scratches to the coating would require it to be removed and recoated (not a quick job). But due to specifics of the lamination process, its application comes before final the shaping, so that final 16 hours of machining presents a lot of time where the coating can be damaged.

But when it’s complete, the crystals are a stout 2.4 mm thick and have zero light refraction.

On top of that, the laminated sapphire has been tested to withstand impacts from a seven-kilogram weight with a steel spike swung on a pendulum (and not leave a mark), a much more violent encounter than will take place during even the worst impacts in a polo game.

This type of test would completely shatter a regular sapphire crystal, even one that is the same thickness. The benefits of lamination go beyond the mere increase in thickness; it adds strength, flexibility, and resiliency for superior impact resistance.

And that combines with the rest of the package for something more than the sum of its parts: a very light and strong composite case (which won’t transmit shocks well due to low mass); a titanium movement suspended by cables (to allow shock vibration dampening while also having less mass and being resistant to said shockwaves); and a strong laminated sapphire crystal (which can withstand huge impacts unscathed) all come together to create a watch that should be very capable of taking a beating.

Each of the components is great on its own, but when combined, they play off each other’s strengths to achieve one specific goal: to take a lickin’ and keep on tickin’.

The team at Richard Mille takes projects for extreme pieces and looks at them from a variety of angles, making choices based on previous choices. The laminated sapphire glass drove the project with the desire to see the movement, and the movement was designed knowing that it would be visible. Each part begat another, and in the end something bigger was created.

The RM 53-01 is just another example of how Richard Mille keeps pushing the boundaries of material technology in relation to watchmaking. And it pushes the tourbillon to the edges of what is thought capable of these delicate mechanisms. Before I knew how brutal polo could be, I was simply impressed with the effort. But now that I understand the true punishment possible during a match, I know this watch is going into battle. And if it survives a battle like that, it should be good enough for your wrist.

While I take a moment to be happy I have never played polo (seriously, that game is ridiculously dangerous), why don’t you have a look at my breakdown!

Polo: The Sport Of Kings, And Thanks To Richard Mille, Yours Truly