Shrinking things down in size has been a familiar business strategy for many industries over the past century as products develop and change with ever-advancing technology. Sometimes the miniaturization of technology allows bulky things to be hidden away, and sometimes it makes products possible that were previously infeasible, if not unimaginable.

Miniaturization doesn’t necessarily mean that things become tiny or micro sized, it simply means that components or entire products can be made with less material and in a smaller package.

Miniaturizing a house, for example, doesn’t make it a Barbie house, but technology can find a more efficient way to construct using fewer materials and volume, often while providing the same space and functionality as before.

The most formidable barriers to miniaturizing anything are usually material science and fabrication techniques. It is easy to make a spring that is ten millimeters in diameter, but harder to make one that is one millimeter in diameter and even more so for one that is 0.5 mm in diameter. The smaller things become, the more advanced the technology usually needs to be to achieve such reductions.

Micro- and nano-scale fabrication only came about in the last few decades, with the first degree program for nano engineering coming in the last 20 years. And yet humankind was creating rather small mechanical watch components as far back as the 1500s, which shows that sometimes the next leaps in scale can take a fair amount of scientific advancement.

In the watch industry alone, the last two decades have seen some of the largest leaps, with the introduction of silicon fabrication techniques such as DRIE and MEMS via PVD, CVD, EDM, and various lithography processes.

Even Greubel Forsey is in the midst of a long exploration of mechanical nano fabrication (see Black Box Theory: The Greubel Forsey Mechanical Nano Movement Explained With A Wild Guess).

It truly looks like miniaturization is becoming a catalyst for advancement in many industries.

One recent example from Baselworld 2018 that wowed me comes from Zenith, a brand known for being serious about its research and development. The new Zenith Defy Zero G miniaturizes in an astonishing manner, a next-generation watch coming a nice round ten years after the original Defy Xtreme Zero-G in 2008.

The accomplishment of this watch is entirely in the effort Zenith has taken to make the Gravity Control module smaller. And, boy, smaller they did. It all started back in 2008 when the Defy Xtreme Zero G was launched, introducing an entirely new mechanical concept in watchmaking: the gimbaled balance assembly. Similar to the original marine chronometer cases, the balance mechanism was placed on a very complicated gimbal system allowing the balance to rotate in any direction as the watch moved with the intent being to always keep the balance in a horizontal face-up position.

The assembly was weighted and balanced so that it always came to rest in the same horizontal position.

The biggest downside of this mechanism was that it was big. Very big.

The Gravity Control module cage was more than 18 millimeters in diameter, making the case rather thick. In the different watches this mechanism has been in, from the original Defy Xtreme Zero G through the Academy Zero Gravity, all the way to the multiple iterations of the Academy Christophe Colomb, the Gravity Control module cage has warranted special consideration.

Aside from the very first piece, which was more traditional in its sapphire crystal use, every other watch featured a very complicated-to-machine sapphire crystal with large domes on the front and rear of the case to allow room for the module to rotate.

This made the maximum dimensions for the case height extend into the 21-22 millimeter range. That makes for one generously large helping of watch. Now after a decade of use in a variety of Zenith wristwatches, the Gravity Control module has been updated and miniaturized, making for an eminently more wearable piece. The module is so much smaller that the case can use a standard flat sapphire crystal on the front and rear, resulting in a “measly” 14.85-millimeter case height. This size – thinner than a standard TAG Heuer Carerra Caliber 16 – is the new Defy Classic case size.

Now when I heard that fact, I thought there might be a translation issue because that seemed a bit incredible. And so I asked if they meant that the mdule was 30 percent smaller (and would therefore actually be 70 percent of the original size). The answer was no, it was less than one-third of its original volume.

Needless to say, I was thoroughly impressed at this double-checked reduction. This meant that every single component was reduced in size until the entire mechanism shrank by 70 percent of its volume! The math will get you every time

Now this is where the math caveat comes in: Zenith specifically said volume and not size, diameter, or any other spatial designation. That is why the number quoted – 30 percent – is possible, because the volume of a sphere grows much faster than the radius. Based on the calculation for the volume of a sphere, the original 18.6-millimeter diameter of the module cage results in a volume of 3,369.28 mm3. Thirty percent of that volume is equal to 1,010.784 mm3.

When you plug that number back into the equation, you arrive at a new diameter of the cage equaling 12.45 millimeters. This would fit perfectly in a case measuring 14.85 millimeters when you take sapphire crystal thickness and appropriate clearances into account. Of course, I do not have the real figures so that’s conjecture, but the diameter seems to fit, and visually it looks to match. But in the end, that isn’t truly the most important aspect of the size reduction.

Instead, it’s the fact that Zenith did it in the first place.

There have never been any statistical claims backed up with hard data to show that the Gravity Control module provides a more stable and consistent rate than normal watches regulated to C.O.S.C. standards.

In this day and age of hyper-precise digital watches and satellite-updated time on our phones, whether the intriguing and eye-catching gyroscopic escapement provides any chonometric benefit is largely a moot point. The goal (at least in my mind) is to attempt something daring: to create a miniature machine thought nearly impossible.

So when Zenith released the first Zero G back in 2008 that was why it was so awesome: because the brand made a difficult idea a reality. Now it has taken that difficult mechanism and made it smaller and more efficient, showing that even more things are possible than once thought.

Even if basic tourbillons and the incredibly complicated Gravity Control module do nothing other than keep comparable time, the research and engineering that goes into these micro mechanisms can have unlimited potential in the future of micro and nano mechanics.  We have yet to discover where else this know-how can be applied, but the progress made by Zenith in decreasing the size/volume of a very precise mechanical system by as much as it did is potentially more important than any small gains in chronometric performance. And yet, sadly, the potential future benefits and the awesome accomplishment of the size reduction aren’t what is going to sell the Defy Zero G. People want something that looks great, wears well, and not surprisingly feels a bit familiar (see Kiss Drummer And Passionate Watch Collector Eric Singer’s Baselworld 2018 Top Ten).

This is why round watches are still the most widely sold shape or why basic time-only watches outsell complicated watches (aside from the cost). People like familiar.

The design of the Defy Zero G is bold enough to live up to what is under the hood, but recognizable enough that customers might consider picking one up. The modern skeletonization of the movement is excellent, allowing the mechanics to shine while also adding tons of opportunities for showcasing finishing and aesthetics. The movement architecture may remind us of exquisite multi-axis tourbillons from technical boutique brands.

The Defy Zero G’s case is simple and clean, wearing fairly well for larger wristed men as well as people preferring something a bit more substantial on their wrists. 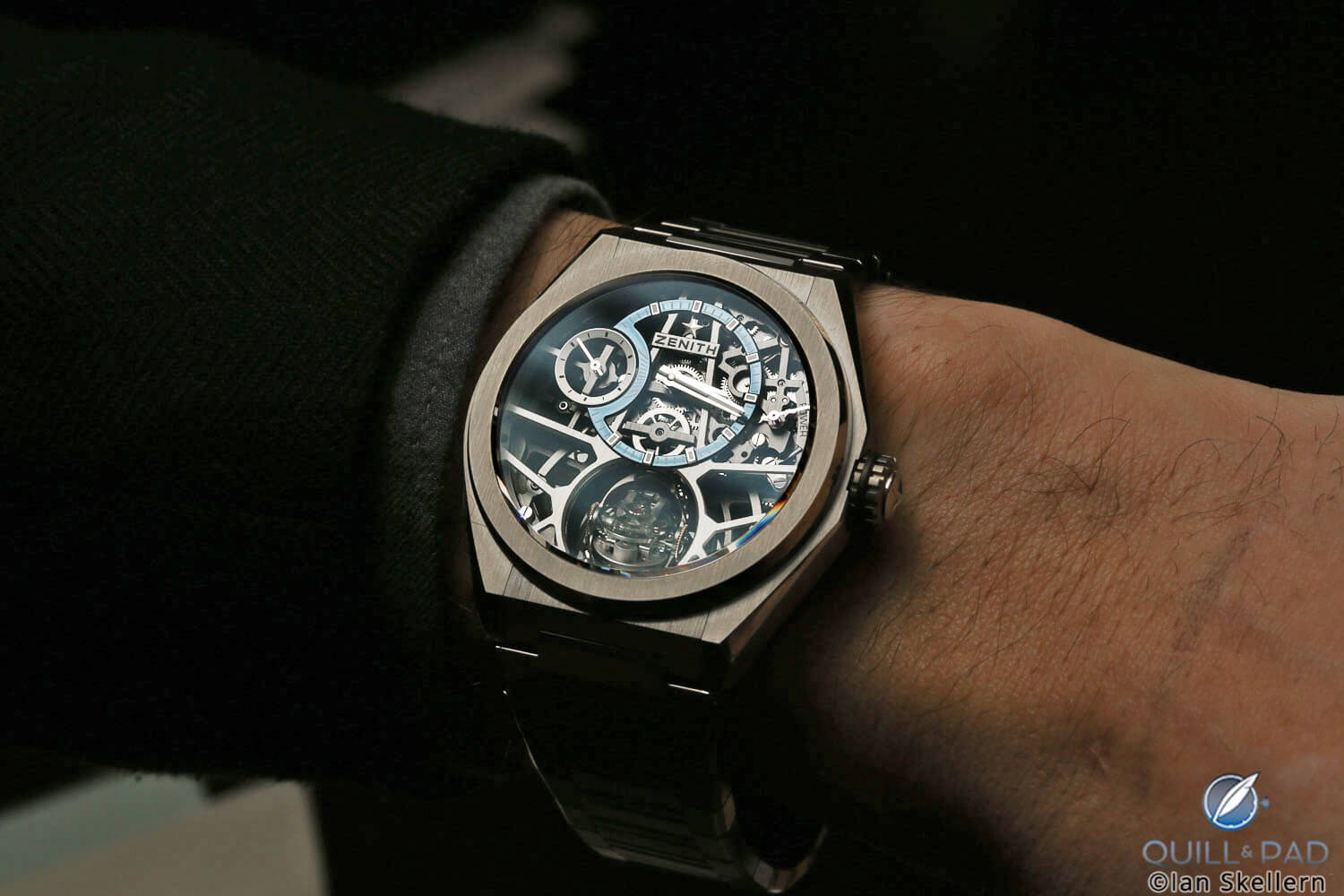 What the Zero G doesn’t do is stand out as too extreme for a discerning collector instead of focusing on technical value.

Without the large bubbles on the sapphire crystals, the Defy Zero G can almost be a bit of a stealth watch. Not much, but it could still maintain an aura of a normal-ish watch. Sometimes for watches at this price point, an understated result is as important as the finishing, mechanics, or the limited edition number.

So while the main reason I love the new Zenith Defy Zero G – the accomplishments held inside, the super cool movement details, and especially the wearability – others may find these reasons secondary.

What I think we all can agree on is that it is a strong release and a fantastic direction to take the Defy Zero G moving forward and that the size reduction of the Gravity Control module was a fantastic way to spend engineering effort.

I’m only sad that it is still way out of my price range, otherwise I would see this one make the shortlist thanks to that awesome gimbaled balance mechanism.

Oh well, I guess I’ll have to keep playing the lottery and selling knick-knacks at the farmer’s market! So until I make enough for a down payment, let’s move on to the breakdown!