Distillation (noun): the extraction of the essential meaning or most important aspects of something, be it an object, experience, or idea.

Sometimes in life, the litany of personal experiences boils down to a single moment: an instant in which everything ever learned or questioned comes into focus and a true understanding is within grasp.

This instance may be called enlightenment, an epiphany, or a light bulb moment (aka eureka!). But we don’t all need to be Archimedes or Einstein to have such a moment; in fact it happens to everyone at some point, though some focus their efforts on purposely creating such moments. One of the key aspects of creating such a moment is the art of distillation.

Taking the most important and essential components of something to divine its true meaning is a challenging but worthy task. Great artists and designers are continually seeking to distill emotion and experience into a single artwork.

At the same time, great engineers also work with the concept of distillation as a problem that is dissected until the most fundamental components are isolated and solved. This is partly the philosophy behind the phrase “Keep it simple, stupid” (which I extensively describe in In The Face Of Complexity, Simplicity Rules: The Konstantin Chaykin Genius Temporis).

But distillation doesn’t always lead to a eureka moment; sometimes it can result in a return to form, getting back to the roots of where it all started.

One watch brand in that place right now is De Bethune; after a recent ownership change, De Bethune is getting back to what it is best at: making awesome watches exemplifying modernity and technical excellence (not that De Bethune ever stopped doing just that). De Bethune is now focusing on distilling the horological essence of what makes it so special, beginning with the DB28 Steel Wheels and progressing to a limited edition DB28 Steel Wheels Blue taking it one step further.

The essence of De Bethune

The re-launch of De Bethune began at SIHH 2018 with the DB28 Steel Wheels, a new take on the iconic DB28, which has been a brand mainstay for years. The DB28 Steel Wheels is a timepiece taking the complete history of the brand and distilling it into the essence of De Bethune.

A few months later at Baselworld 2018 De Bethune debuted a limited edition called the DB28 Blue Steel Wheels, and as you may have guessed it was almost entirely blue.

Oh, that De Bethune blue: it is something that can almost single-handedly define the De Bethune vibe. Rich and cool, vibrant, and deeply mysterious all at the same time, it is the cherry on top of the De Bethune cake. In conjunction with all the features of the Steel Wheels, the blue covers even more of the brand’s highlights.

When I think of De Bethune I think of articulating lugs (check); spherical moon phase (yup); titanium balance wheel (of course); polished spherical markers (you got it); delta-shaped main bridge (who are you kidding); triple shock absorbing balance bridge (definitely); outstanding hands (oh yeah); on-display power reserve mechanism (easy); silicon escape wheel (no question); and most of all, highly-polished heat-blued titanium (do I even need to mention it?). The only thing I can think of that isn’t on the DB28 Steel Wheels Blue is the ultra-fine starry sky made from tiny polished pins spread across a wide expanse of the polished blued titanium dial. But De Bethune took care of that with the DB25 Starry Varius, so I can forgive that not being on this one.

The Steel Wheels Blue really is all in the details, so the facts around this piece are nothing short of awesome. It is basically the same as the DB28 Steel Wheels, the main differences being aesthetic. The Steel Wheels uses the DB28 movement as well, but with partial skeletonization dial side along with some small updates.

One of the biggest visual features on the front, which is unique to the Steel Wheels and Steel Wheels Blue models, is the open-worked dial exposing the gearing underneath, something rare for De Bethune even though it feels right at home with the brand’s style. The mainspring barrels and other wheels are also open worked to make the dial feel even lighter.

Going further, the Star Trek-esque main bridge is also cut away to a thin arrow shape, providing even more visibility into the movement. On the bridge is a similar microlite engraving as found on the DB28 GS, but instead of following the shape of the bridge it mimics a côtes de De Bethune pattern creating a new kind of depth to the dial. Depth is something always found on a De Bethune dial, and the three-dimensionality is highlighted by the movement architecture, three-dimensional spherical moon phase, and polished spherical hour markers.

The hands are unique too, further emphasizing visual depth. The hour hand is actually a rocket-shaped piece of sapphire crystal with polished and blued steel banding around the edge and a pointed blued steel insert in the center, making for a see-through yet complex shape.

The minute hand is a somewhat skeletonized blue steel pointer with pierced arrowhead detail. Unlike some other models, which see delicate hands dramatically curved down to meet the dial, these hands are largely flat since the chapter ring around the edge rises to meet them.

De Bethune DB28: difference is in the eye of the beholder

The rear of the movement is largely similar to other DB28 models featuring the power reserve indicator on the back. The delicateness of the mechanism is lovely; the long yet thin rack that drives the indicator seems to glide across the movement, a testament to the precision inside every De Bethune. Back of the De Bethune DB28 Steel Wheels Blue

But here we reach the largest difference between the Steel Wheels and the Steel Wheels Blue: that incredible azure hue. The Steel Wheels Blue takes after the DB28 Kind of Blue Tourbillon, which saw almost the entire watch and movement tempered to a brilliant blue, creating such a striking appearance I often daydream about its magnificence (seriously).

On the Steel Wheels Blue the entire dial, chapter ring, hour markers, balance bridge, delta bridge, bezel, crown, lugs, case back, rear movement plates, and bridges are all blue. The open-worked gearing on the dial has been kept polished steel to provide a strong bit of contrast in the center. On the rear, the power reserve rack, central bridge, springs, and wheels are also polished steel for touches of contrast.

The case back screws aren’t heat blued, but every single other component is. And even more impressive is that the blue isn’t an added coating or anything, but a true metallurgical reaction (oxidation) that is as precise to achieve as it is difficult. 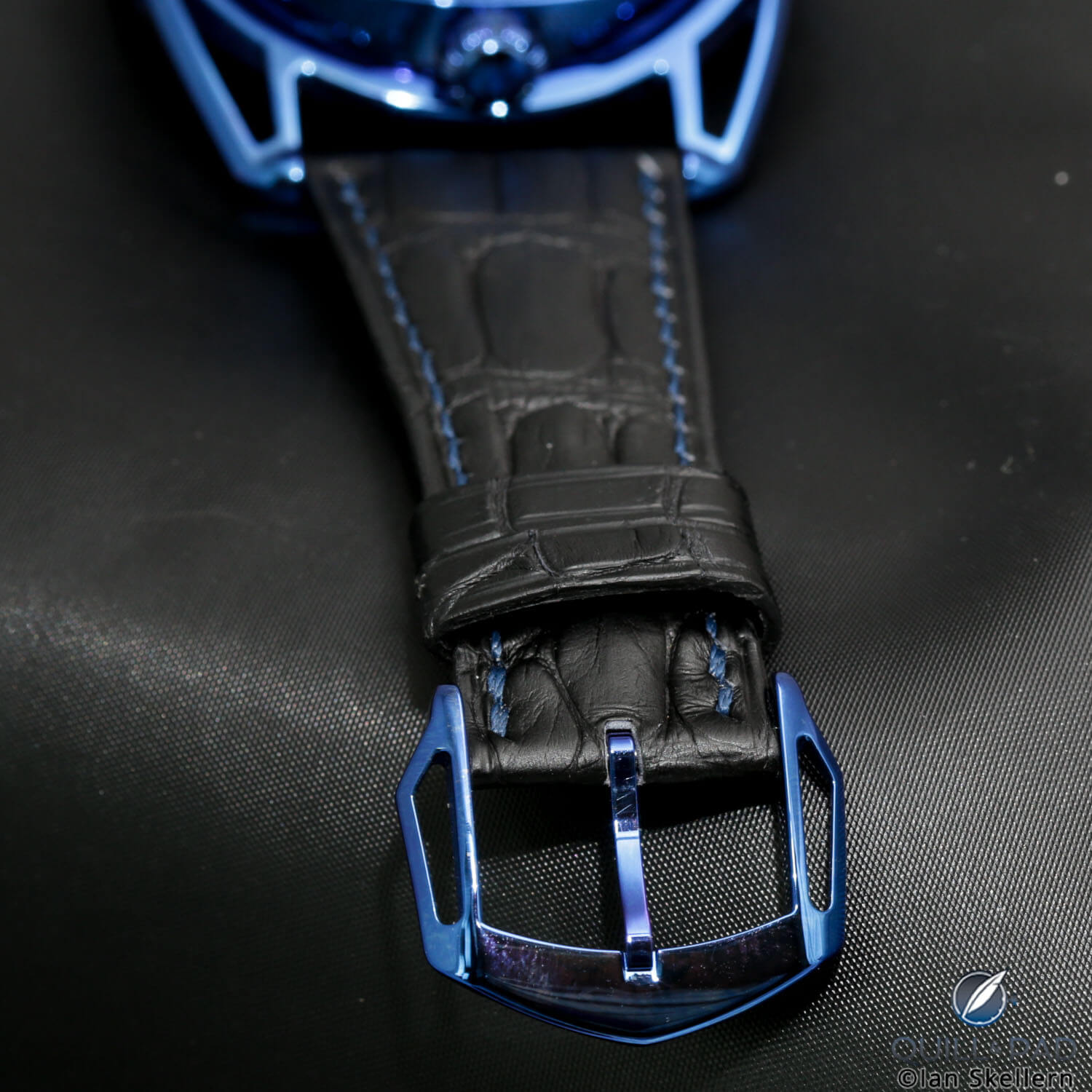 When I heard the announcement of new investors for De Bethune in the fall of 2017, I anxiously awaited what was to come and have not been disappointed.

I absolutely love the DB28 Steel Wheels Blue, so let’s break it down!

Note: this watch will be released in a small series with slightly different details than shown. Also, De Bethune is happy to work with individual customers to customize timepieces as they wish.