The vintage watch train keeps rolling right along – in great part thanks to enthusiast authors like watchmaker Sébastien Chaulmontet (who co-wrote Chronographs for Collectors) and vintage forum owner Alistair Gibbons.

Gibbons, a vintage watch collector himself, founded ATG Vintage Watches in 2002, which is both a forum and a sales site. I would say this one of the best places to find a good vintage watches and learn about the horological world away from the glitzy marketing façade of modern timepieces.

Back in the early days, Gibbons – whose site also retails modern watches like the Bremont line since 2010 – even offered the watches fully restored and serviced. Though he wasn’t a watchmaker himself, he built a good relationship with two watchmakers near his own home in Bristol, and together – Gibbons sourced parts and information – they “did a really good job of restoring these fine old pieces,” he explained.

At that time, collecting and owning vintage really was the much like the wild, wild west as one anecdote from Gibbons’s early days in restoring vintage illustrates. “I have been buying parts from a watchmaker in Rome for more than ten years,” he explained. “He doesn’t speak English, but his nephew sometimes gets back to me on his behalf. Mostly I send a picture of the watch and the part [I need]. We agree on a price and I pay him – at first with Paypal, but it ended up being posted cash wrapped in tin foil! The first watches I did with him were Universal Space Compax chronographs . . . and this was before most collectors even knew what that was!” How Alistair Gibbons found vintage watches . . . and the idea for a book

During our conversation, Gibbons revealed that he first found watches – like most interested parties in the modern world – online, primarily Ebay. Later came enthusiast sites like On The Dash and Timezone.com for him.

Having worked very successfully in digital editing for television and film – some of his high-profile work involved Jackie Chan, Peter Gabriel, and the Beatles – at some point he experienced burnout and moved to Bristol from his native Liverpool “for love and children.” With Bristol being one of the first U.K. cities wired for broadband, a move online was a natural development. And the subject of his website was a no-brainer: “I have always liked vintage, there is something romantic about it,” he explained.

“I invested in some nice watches like Universal Genève, Heuer, Omega, and brands now unknown who used similar movements such as Valjoux,” he said.

“I shot the watches, wrote their histories, and loaded them on to my site. In ten days, I was sold out, which allowed me to buy my own collection of watches – which were quite pricey even then. And this turned into me selling 50 watches a year.”

And as he was essentially creating profiles for each sales page, he realized that it would make sense to save these profiles and turn them into what quite substantially became a book.

“Also as the watch market was starting to go a bit mad I realized there were some watches that just started disappearing into safes, while other watches were more or less ‘parts’ watches that were being touted as the real thing. I realized that I had an archive of ‘real’ watches from before – when the internet was a little more honest,” he explained.

“Essentially the book is a guide, a compendium . . . the truth, you might say.” 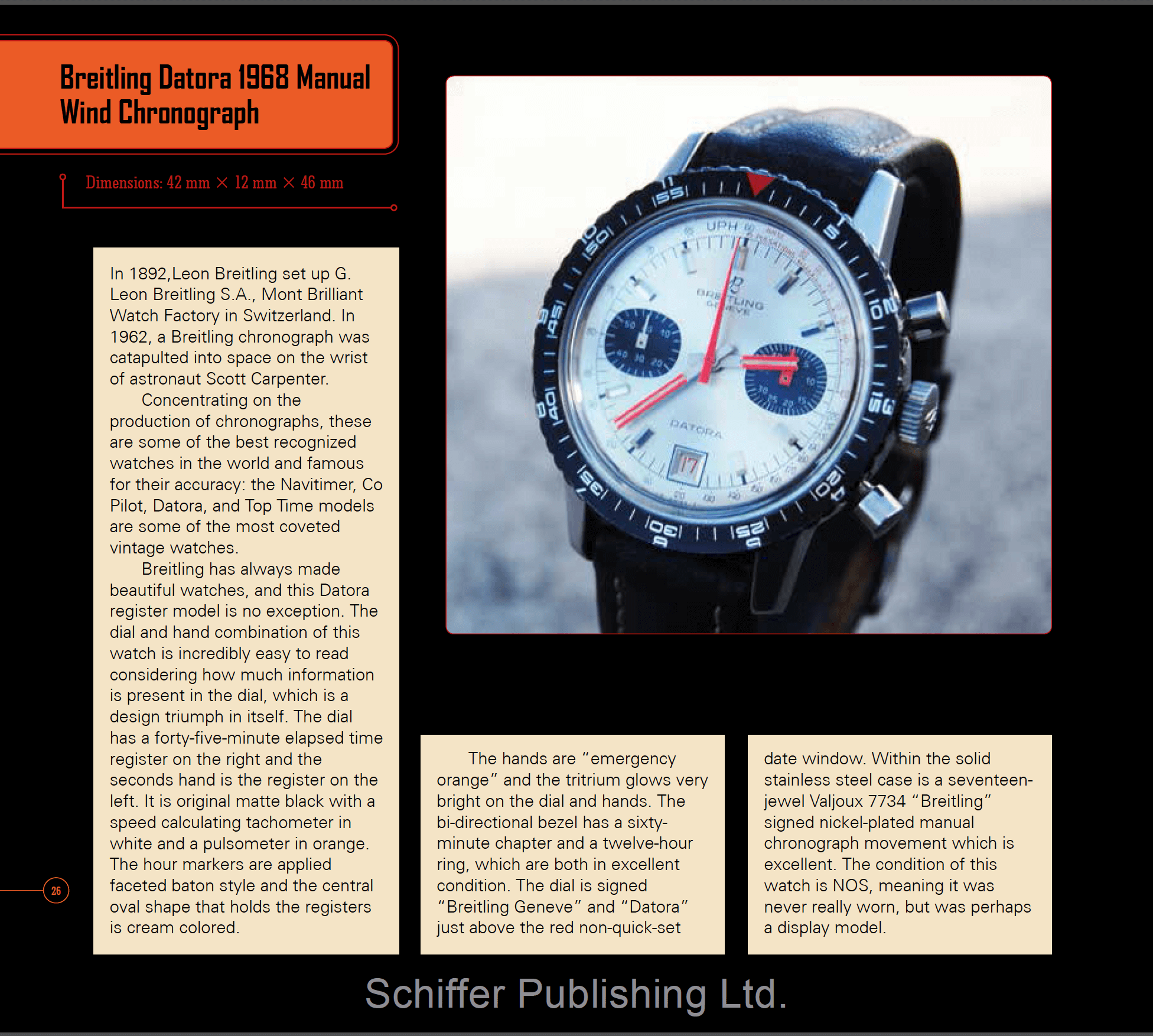 This is a good-sized, quality book with glossy pages, but thankfully it’s not oversized so it is comfortable to hold and read. The size of so many larger coffee table books these days make it impossible to read them except at a desk (which makes me wonder if they’re even meant for reading at all).

The layout of this book is interesting, which it naturally has to be when you consider that it contains 15 years’ worth of photos of varying sizes and lighting conditions. The black background aids in giving the layout an elegant and uniform feel.

The text is uniform and catalogue in style, which is a good thing for me as I love uniformity. It makes it easy to zero in on the information you might be looking for, as does the alphabetical order of the watches discussed.

But, like most books these days, it could have used a splash of copy editing – so if you’re not already versed in things horological you may not be able to follow quite as easily.

Combating that, however, is a small glossary of terms and movements used at the back of the book, which does help somewhat.

Another point illustrating the level of knowledge required to best appreciate this book is the fact that the watches discussed are mainly little-known or unknown brands of the 1950s, 1960s, 1970s, and even 1980s that may or may not have disappeared. Better known watch brands in the book include Breitling, Heuer, Junghans, Omega, Rolex, Tissot, and Zenith.

Largely unknown brands today include Aquastar, Arsa (though you may know Auguste Reymond, which it became), Baylor, Benrus, Difor, Gigadet, Vantage, and Wakmann. I particularly liked the inclusion of 1960s watches by Bucherer and Enicar – the latter mainly known now as the movement maker used by Gerd-Rüdiger Lang in Chronoswiss’s more complicated timepieces.

My conclusion is that if you like vintage watches, you will very likely love this book, which can be enjoyed in bits and bobs or in one sitting as you like.

For more information and to purchase this book, please visit one of the following: