The universe loves disorder. In fact, disorder is the universe’s ideal state. And it makes every effort possible to reach a state of total disorder.

It takes a lot of energy to keep it all together, as any parent two days before Christmas knows full well. But in universal terms, disorder refers to a low-energy state, with no potential or kinetic energy left over to keep things from being completely still (or as close to still as possible).

According to the Big Bang theory, when the universe as we know it began, every piece of energy was tightly packed into an area estimated to be the size of a soccer ball (give or take a little).

This was the most ordered the universe ever was, and it has been doing its best to spread out and randomize for the last 13.7 billion years. On a quest of physics to always reach a lower energy state, the universe has accidentally created some amazing things due to chance and energy-dense regions, leading to the creation of stars, planets, nebula, and even black holes.

But no matter what, thanks to the passage of time and its relation to entropy (entropy is nearly a function of time), the eventual result of all of these (and whatever else exists in the universe) is complete destruction from erosion, evaporation, or the most fun way yet, explosion.

And pondering these vast concepts led a talented artist and watch designer to create a unique watch collection that is as different as possible to her previous ideas. In June 2018, Fiona Krüger launched her new Chaos collection with Mechanical Entropy, a watch with the lofty aim of illuminating intangible ideas regarding time and its relation to the universe.

Coming from her background in skull-shaped watches, Krüger has done an about-face concerning aesthetics while continuing to pursue a lifelong fascination with time, life, and death.

The driving force behind the new Mechanical Entropy, obviously, centers around entropy, decay, and the tangible effects we see in our lives.

See, the entire universe is falling apart in one way or another. It is taking a while, but everything that exists in the universe is destined to be returned to a cold swirling dust in about 101000 years, which is a very, very, very long time from now.

While there is no concern to be had, the process is an interesting one – so interesting that it inspired Krüger to consider how to convey that everything wants to go from higher energy to lower energy and that in time everything will.

Physics is an obvious inspiration, but art plays just as important a role. Using sculpture to relate to other physical objects is a good move, and Krüger couldn’t help but be fascinated by an installation by artist Cornelia Parker named Cold Dark Matter: An Exploded View. Trying to create an explosion on the wrist, one that is paused midway through destruction, led to a series of ideas that eventually resulted in Mechanical Entropy. But the destruction and its relation to time weren’t the only factors: the clear contrast between precise, measured, and delicate watchmaking and the sheer chaos of an explosion were pitted against each other as well. And I see it as a fantastic comment on the fact that they exist side by side, just on different scales of reference.

Where does this creation actually lead, though? The emphasis is on a graphical representation of an explosion, specifically in a semi-comic book style with hard lines and asymmetrical points that mimic a comic book boom graphic.

Since this type of explosion is widely known and understood, the style didn’t need to be explained after a first glance. It is obvious immediately that this watch is figuratively blowing up. The process for Krüger, after doing visual research for inspiration, begins with concept sketching to help develop the direction. For the Mechanical Entropy, she realized (with some advice) that a brand-new movement was probably going to be the only way forward if she wanted to do this properly.

Early sketches showed a progression of a stretched-out mechanical gear train morphing into a series of explosions. This helped direct what the actual shape of the plates, bridges, wheels, and gear train layout needed to be. As a designer, it also meant that Krüger needed to enlist the help of experts in movement engineering and construction.

Jean-Marc Wiederrecht’s Agenhor was the only company on her list to help make this a reality. Since the complex design for the explosions drove the layout of the gear train, Krüger worked very closely with Agenhor to achieve a movement geometry that matched her aesthetic vision.

This is  the opposite of how development works for most new movements since watch dials and displays tend to follow the underlying movement architecture.

But Agenhor is always up for a new challenge and so the Chaos 1 caliber was born. This represents the first exclusive caliber for Krüger and her brand and will form the backbone of the Chaos collection moving forward, at least until a next caliber is released. The very attractive back of Fiona Krüger’s Mechanical Entropy

It really is a grand accomplishment, especially considering that the entire project has been going for less than a year since its kickoff. The result is also rather interesting and, like her Skull collection, is a wild departure from everyday watchmaking. The look of Mechanical Entropy is a clear interpretation of explosions and the chaos they produce. Bridges become sharp, angular shards, and wheels are cut out as if they have been hit by a blast wave of shrapnel. The going train stretches out in a quasi-straight line from 12 to 6 o’clock with the balance at the base of the movement. The hour markers continue the explosion, appearing as randomly shaped shards and leaving the dial behind, mounted as they are on the underside of the sapphire crystal. Once the rear of the movement is reached, the explosion is actually a little subdued, but the bridges maintain the theme from the front. One component that “survived the explosion” is the ratchet click on the mainspring. In a strange way it is shaped like a toucan sitting on the edge of the wheel, with its feet and tail ensuring the power doesn’t get wasted in the ensuing explosion.

But aside from the wild look, the movement is a cool-yet-simple time-only movement created by the awesome people at Agenhor. The finishing is rather unique, a combination of brushing with black PVC contrasted with laser-etched details that are galvanically coated with either gold or rhodium depending on the version. 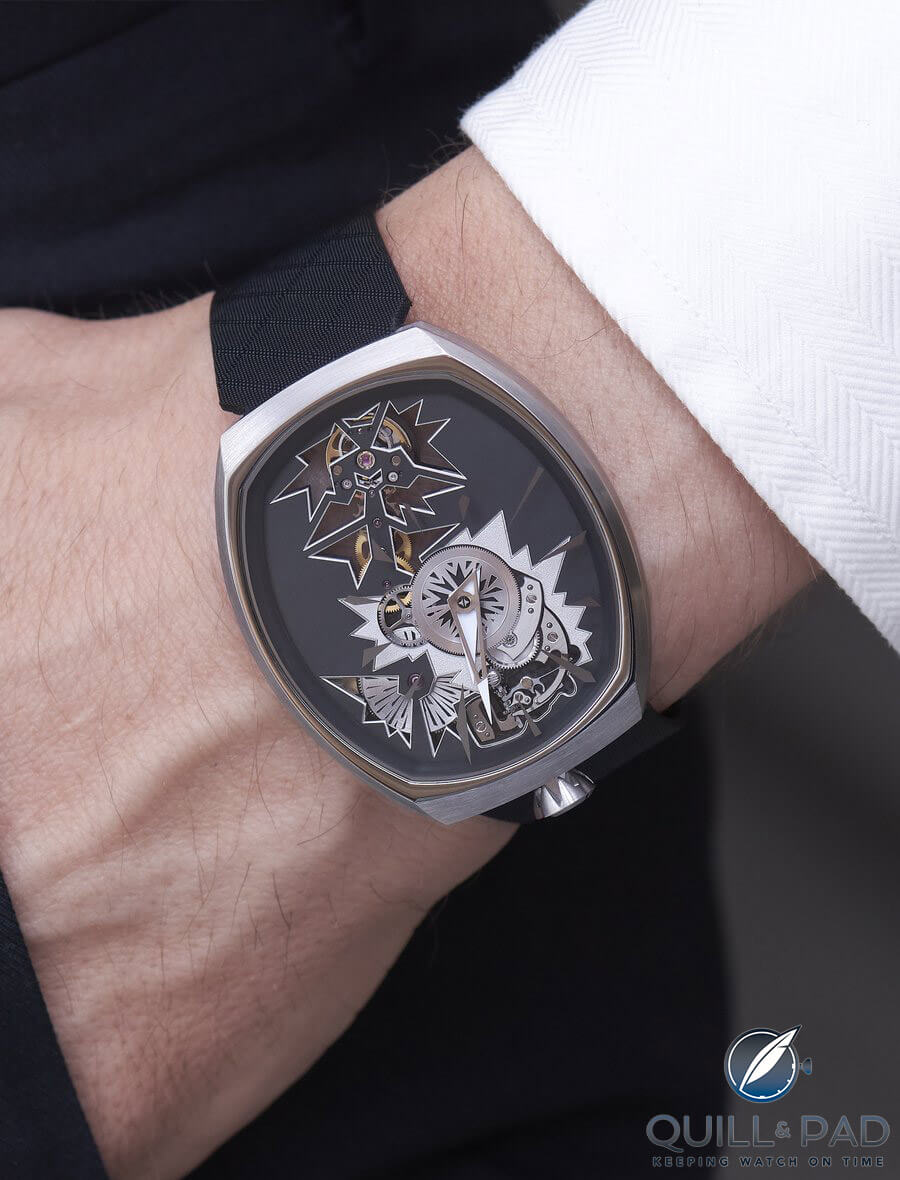 The action found in the Chaos movement is offset by the tranquility of case, an extremely clean tonneau shape with a mix of polished and brushed surfaces and simple angles. Comfort isn’t ignored, though, as the case back has a gentle curve to hug the wrist.

Even the crown has minimal details, with a curved taper and a few milled slots on the underside so as not to flashily detract from the movement. And the movement is where the focus should be: the extreme depiction of entropy, frozen in time.

The style definitely isn’t a catchall: as with Krüger’s previous watches, the Mechanical Entropy is an artistic pursuit of an idea and those who understand it will see the meaning.

Krüger isn’t one to stick with a mainstream path and that is why she creates interesting timepieces that make us think. In a way not too dissimilar to MB&F and Urwerk, she explores ideas and how they relate to watchmaking. And the results are always pretty spectacular. Mechanical Entropy and the new Chaos collection signal a new chapter for Krüger, an expansion from the beginning driven by skulls and meditations on mortality. She is still urging you to look a little deeper and think a little more abstractly, though, and in a world that frequently focuses too much on what is right in front of us, this piece is a welcome change!

Since Mechanical Entropy already started the party, how about the breakdown!