Many watch enthusiasts dream of owning at least one timepiece by Omega. Or maybe even a second or a third. The Swiss brand definitely ranks among the most popular watch firms ever.

It is in particular the chronographs – led, of course, by the legendary Speedmaster, which celebrates its sixtieth anniversary this year – that enjoy a unique reputation. Today, vintage and new models alike are more than ever sought after.

The international online community and fans of the brand have grown immensely over the past years. Entire online forums and blogs are dedicated to the brand’s timepieces in general and the iconic Speedmaster in particular – the latter in great part thanks to Fratello’s #SpeedyTuesday initiative, which even spawned a limited edition watch. Fans from all over the world never get tired of comparing and discussing reference numbers, tiny details, and common characteristics such as “broad arrow” or “lollipop” hands, Snoopy patches on the dial or case back, exact wording (or not) on the dial, and more, on the almost unlimited array of new and old timepieces, limited and special editions included.

Keeping track of all this is undoubtedly a challenge. And even declared Omega experts might be at odds when it comes to deciphering references.

To give you an idea of the overwhelming variety in the current Omega watch world, I have put together a guideline. Please note that the following list is not intended to be exhaustive or used as purchase advice.

I merely wish to shed light on Omega’s very special nomenclature as it applies to the brand’s modern watches. For identification, each watch model features a so-called Product Information Code (“PIC” for short), which consists of 14 digits. In the following, I refer to this as AAA.BB.CC.DD.EE.FF. The equivalent descriptions can be converted using the “codification table” and the “collection code” (see below).

The first three digits of the PIC (the “AAA”) represent the collection: “311,” for example, stands for the classic Speedmaster family.

The following two numbers of the PIC (the “BB”) relate to the case and the strap/bracelet material; “13,” for example, means that the watch is housed in a stainless steel case and equipped with a nonmetal strap.

“CC” defines the diameter, rounded up to the next digit.

“DD,” the PIC digits in fourth position, tell us in a more detailed manner whether it is a quartz or mechanical caliber. The first D provides information on the nature of the movement: whether it is a chronograph, a co-axial chronograph, or even chronometer certificated.

The second digit of the D duo refers to the number of complications, with “complication” being considered an additional indication beyond hour, minute, second, and date.

“EE” denotes the type of the dial: for instance, “01” is a simple black face, whereas “63” would be a brown dial set with precious stones.

The last two digits (“FF”) refer to the sequence number of the production.

According to this system, the long number tells us that, for example, Omega’s Speedmaster Grey Side of the Moon co-axial chronograph (311.93.44.51.99.001), a grey ceramic watch on a leather strap, is part of the Speedmaster family (311). The number 93 explains that the watch features a case not further detailed and a non-metal strap. The “44” defines the diameter, whereas “51” informs us that it is a mechanical co-axial chronograph with one additional complication. The numeral “99” relates to the dial material, a “special material,” while “001” is the sequence number.

Advantages and disadvantages of the system

The following information is excluded from this identification system:

On the other hand, bracelets are precisely defined. In addition to the type of metal, it is also explained, whether it is a two-tone bracelet made of stainless steel and gold or whether it is set with precious stones. However, there is also no information about whether it is classic gold or the in-house Sedna gold.

This is a detail that future customers surely would want to know.

Let’s do the math

Although it seems complex at first sight and takes a little time to understand, the system still provides a reliable first assessment and support before a purchase is made. And it is kind of fun to run a reference through the system, reminding us of some early school math that looked like a pain at first sight but turned out to be okay with the help of some tools.

Nevertheless, the system leaves some questions blurry, which can only be answered by studying Omega’s collection book or in conversation with a specialist retailer. Particularly when it comes to the movement, the ticking heart of the watch. 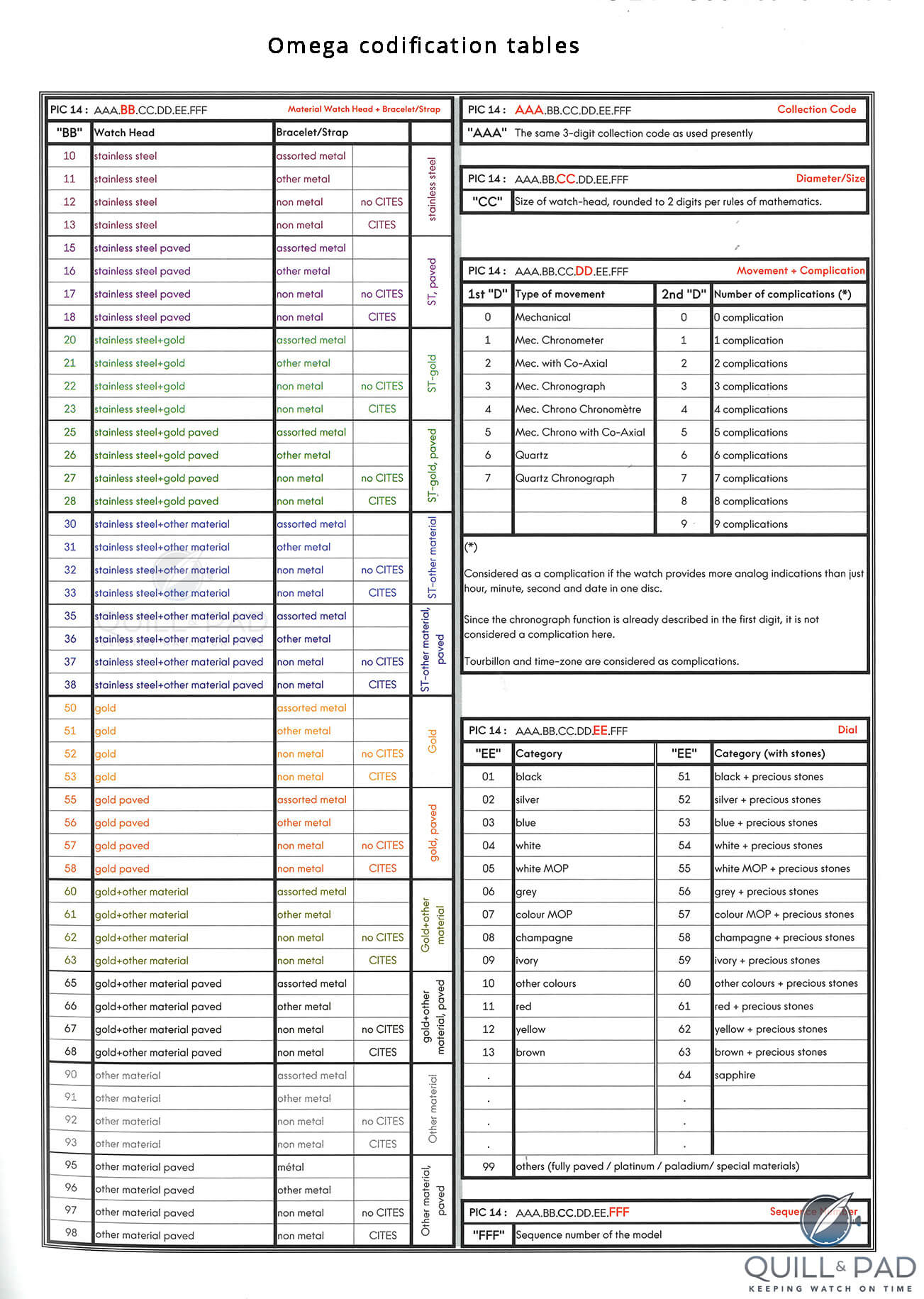 * This article was first published on November 21, 2018 at Decoding Omega References: 14 Magic Digits And Codification Tables Revealed. You might (or might not) find the comments under the original article interesting.